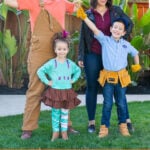 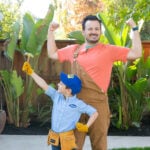 Wreck-It Ralph costumes are a perfect family or group Halloween idea! Check out these easy ways to pull together costumes for the whole family based on this Disney classic.

You probably know by now, if you’re not new around here, that creating family or group Halloween costumes is one of our favorite things all year! By this time we have quite a repertoire:

Wreck-It Ralph Costumes for the Family

As a family, we went through a few rounds of decision making before we landed on Wreck-it Ralph. But when we did, we knew it would be perfect!

I love how the Wreck–It Ralph group Halloween costume makes use of everybody’s size, especially if you have younger kids! The size difference between Ralph and Fix-It Felix is so charming. And if you have a young one who wants to be Vanellope, that looks pretty adorable too.

The other thing that I have loved about this group Halloween costume is that it’s made of many things that we already had, or have been able to wear again!

One of my main focuses when I’m building our family Halloween costumes is to avoid wasteful purchases, and these costumes have proven to be pretty good on that front.

We had the jeans, shirt, tool belt, hammer, and craft supplies. So for this costume I purchased the boots, hat, gloves, and patches.

Iron or stitch the patches onto the hat and shirt.

To create Felix’s golden hammer, paint the toy hammer with a layer of Mod Podge and sprinkle with glitter. Once this layer is dry, repeat until the hammer is completely covered.

I recommend finishing with another layer of Mod Podge to seal all the glitter in so that it doesn’t shed.

Vanellope’s costume proved to be the most tricky.

I did a few hours of research, trying to recreate the costume with pieces that Maggie could wear again. But it turned out to be much more affordable to just purchase a preexisting costume for Vanellope.

I have to say, it was the first time I purchased a whole costume and I missed the creative aspect of it! But economically it made the most sense.

You can find the Vanellope costume we purchased here. It came with a pretty terrible wig, so we just used Maggie’s real hair. She also wore her own boots.

Shank is another costume that’s incredibly easy to piece together! Here’s what you’ll need:

The only thing I purchased for the Shank costume was the hoodie, which I’ve used plenty since! I happened to have the moto jacket and boots that worked well enough.

In the film, Shank wears something closer to a combat boot (linked above). But my philosophy with Halloween costumes is to use what you have if it will get the general feel across of the character that you’re portraying!

Shank wears smokey eye makeup and wavy hair; do your best to replicate those.

Technically, Ralph doesn’t wear shoes. But we figured work boots would be a safe substitute.

Ralph’s shirt is usually a henley, but use what you have! We substituted a t-shirt and cut/ripped up the neckline and sleeves.

The Wreck-It Ralph costumes turned out to be some of our kids’ favorites! If you try them out, be sure to leave a comment and let me know.

What are you planning to be for Halloween this year?! xoxo