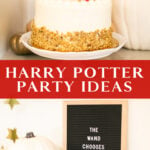 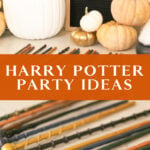 Henry has been waiting to have a Harry Potter birthday party probably since the day after his birthday last year. I can’t tell you the excitement that this kid has had in his heart for this day!

And as I was planning, I kept picturing my college-age self reading the Harry Potter books for the first time, totally unaware that one day I would have a little boy who desperately wanted a Harry Potter party. So I’m sharing all of our Harry Potter party ideas!

Psst – before you dive in, be sure to grab ideas from these other parties too!

For starters, lots of people have asked how Henry knows the Harry Potter stories — from the books or movies. We’ve been getting him the new, illustrated versions of the books (links below) and reading them to/with him for the last couple of years.

We’ve read books 1-3 a couple of times each. I’m a little hesitant to start book 4 (Goblet of Fire) because that when, in my opinion, it starts getting pretty dark. But we’ll play it by ear and see how he responds to it. We let him watch each movie after we finish the book. Mostly because I’m a purist. 😉

I find that reading the books first gave him a really deep understanding of the plot – which is kind of tough to follow for a little kid. But the movies reinforce it all and help put visuals with concepts. The illustrated books also help keep his attention while we’re reading aloud. We read a few pages every night before bed.

If you’re interested in the illustrated Harry Potter books, you can find them here.

How to Throw a Harry Potter Birthday Party

For the party, I didn’t want to go crazy huge. So Henry and I chose a few small things to focus on and did those things really well. He really wanted to have magic wands, make potions, and dress like Harry.

I added a few other things — Harry Potter goodie bags, a simple quidditch cake idea, and some fast (and free!) decorations. So let’s break it all down!

I started by using the leftover pumpkins we had around the house from Halloween and Thanksgiving (Henry’s birthday is at the end of November). Pumpkins are Potter-ish, right? 😉 I added in some star garlands that I had from our New Year’s Eve stash and spread them around the house.

And the only other decoration I made was the floating broomsticks! I had this idea that I wanted to have brooms floating around like they were flying. I loved how they looked, and I made them for free! Here’s a quick DIY for the brooms.

How to Make a Harry POtter Floating Broom Decoration

The wands were a huge hit! They were all laid out by our letterboard sign that said “The wand chooses the wizard.” Each kid got to step up to the wands, pick the one they wanted, and then Ryan would make something up about the wand. (“Ooooh, that one’s made of phoenix feathers and oak wood!”)

After all of the kids picked their wands, Ryan taught them a few spells that they could use to play with. I think he taught Expelliarmus, Wingardium Leviosa, and Lumos.

Here’s how we made our Harry Potter wands!

How to Make Harry Potter Wands

I snagged a store-bought cake and decided to just make a topper. We used three extra dowels from the wands and glued rings from an old shower curtain to the top. I painted the tops of them gold (not the parts that we’d stick into the cake), and these were the three quidditch hoops. Then we just put a Harry Potter LEGO Minifigure on a dowel and popped that onto the cake too.

Henry really wanted to dress as Harry but I didn’t want to buy a costume robe. So I hunted around and found this tutorial for making a Hogwarts robe out of an adult XXL t-shirt. It worked perfectly! I used these Gryffindor patches and sewed them on robes for Henry and Maggie. Done! Each robe took me about 30 minutes to make, FYI.

Other than the wand choosing, the only other activity we had was making “potions,” which was another huge hit. I basically just set out some small plastic potion bottles and sand art bottles and the kids made sand art “potions” all morning.

A couple of tips if you do this. First, make sure you’re standing by with a glue gun and you glue the corks into the bottles after the kids make their potions. Then you won’t have any spillage. And secondly, I recommend doing this activity outside if possible!

And finally, I love to have a little take-home for the kids who come help celebrate! My goal is to always find a take-home that’s affordable, that the kids will love, and that won’t annoy the parents. So I try to stray from throw-away stuff like little cheap toys, etc.

I used plain craft bags and added vinyl Harry Potter stickers using the Cricut machine. Each kid took home their wand and potions. And then we also added a little box of Bertie Bott’s Every Flavour Beans, and a Gryffindor scarf.

The scarves I found on a bulk site and they ended up being less than $2 per kid after a discount.

At the end of the day, it was actually one of the easiest parties we’ve ever thrown for the kids. Henry was super focused on just a few Harry Potter party ideas, so we did those and let the rest go. We had food delivered and just let the kids run around and play. Easy peasy.

I just can’t believe this wild, funny, tender, curious boy is five years old! He’s a joy every day and I can’t get enough of him. xoxo

This post contains affiliate links. This means that I receive a small commission should you make a purchase via one of these links, at no additional cost to you. Thank you as always for your support!