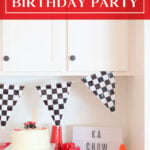 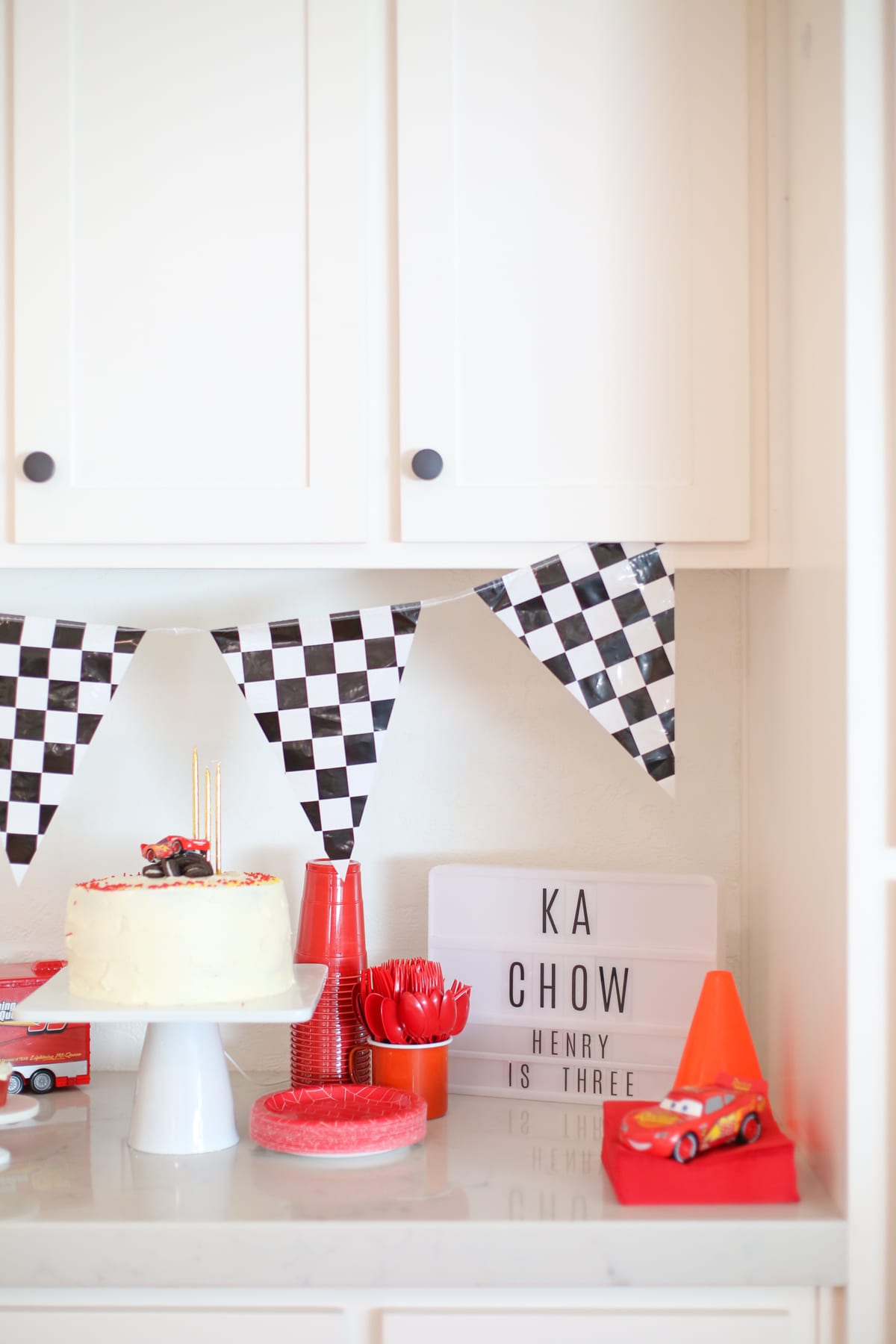 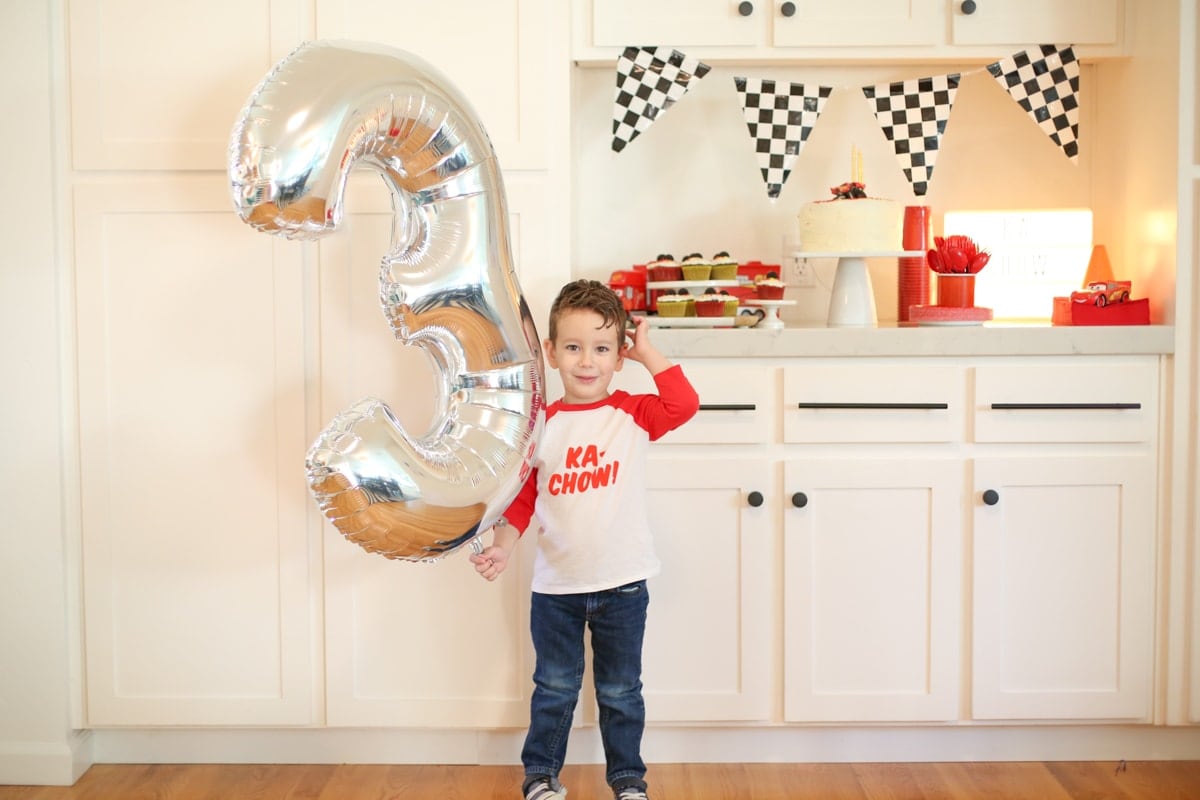 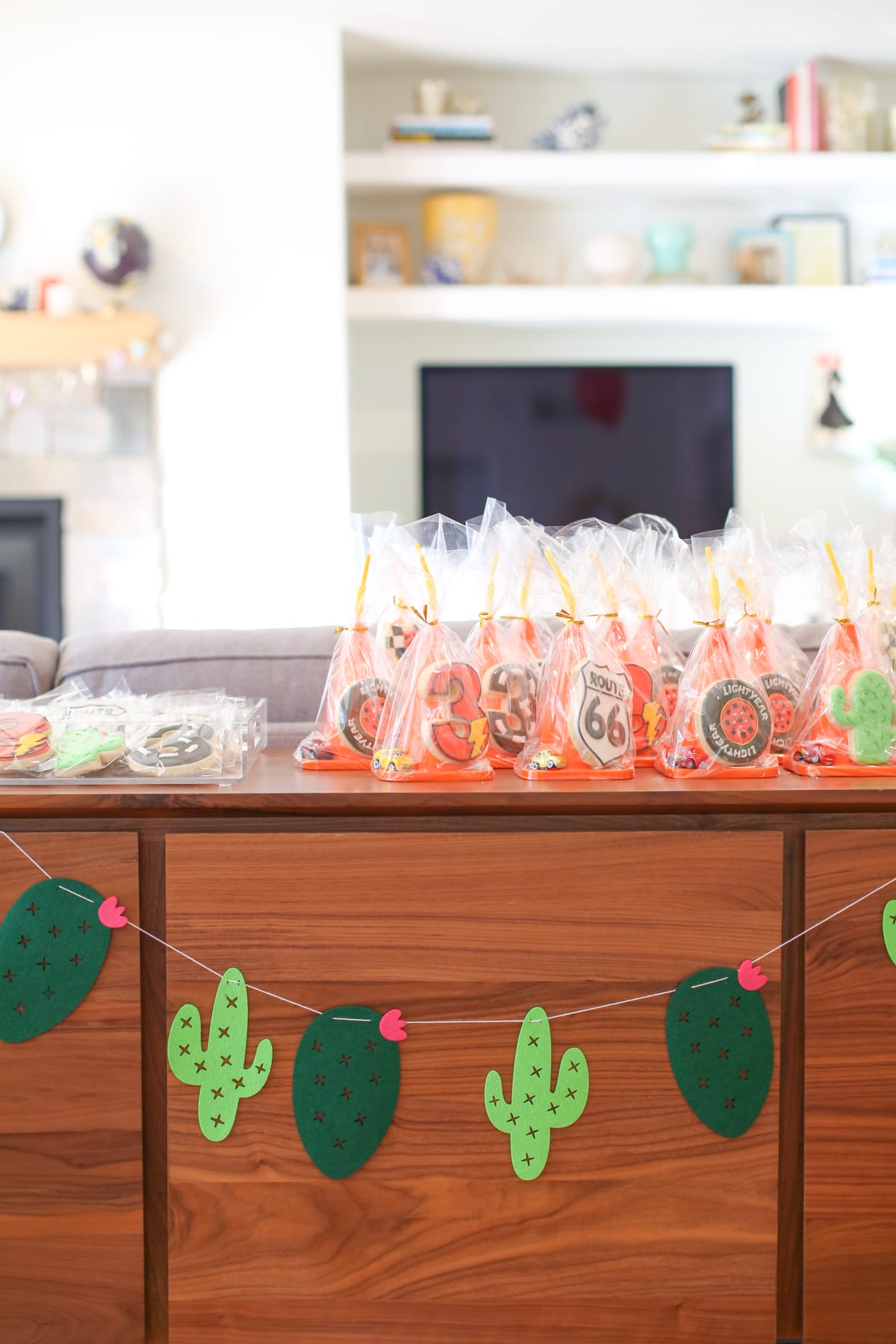 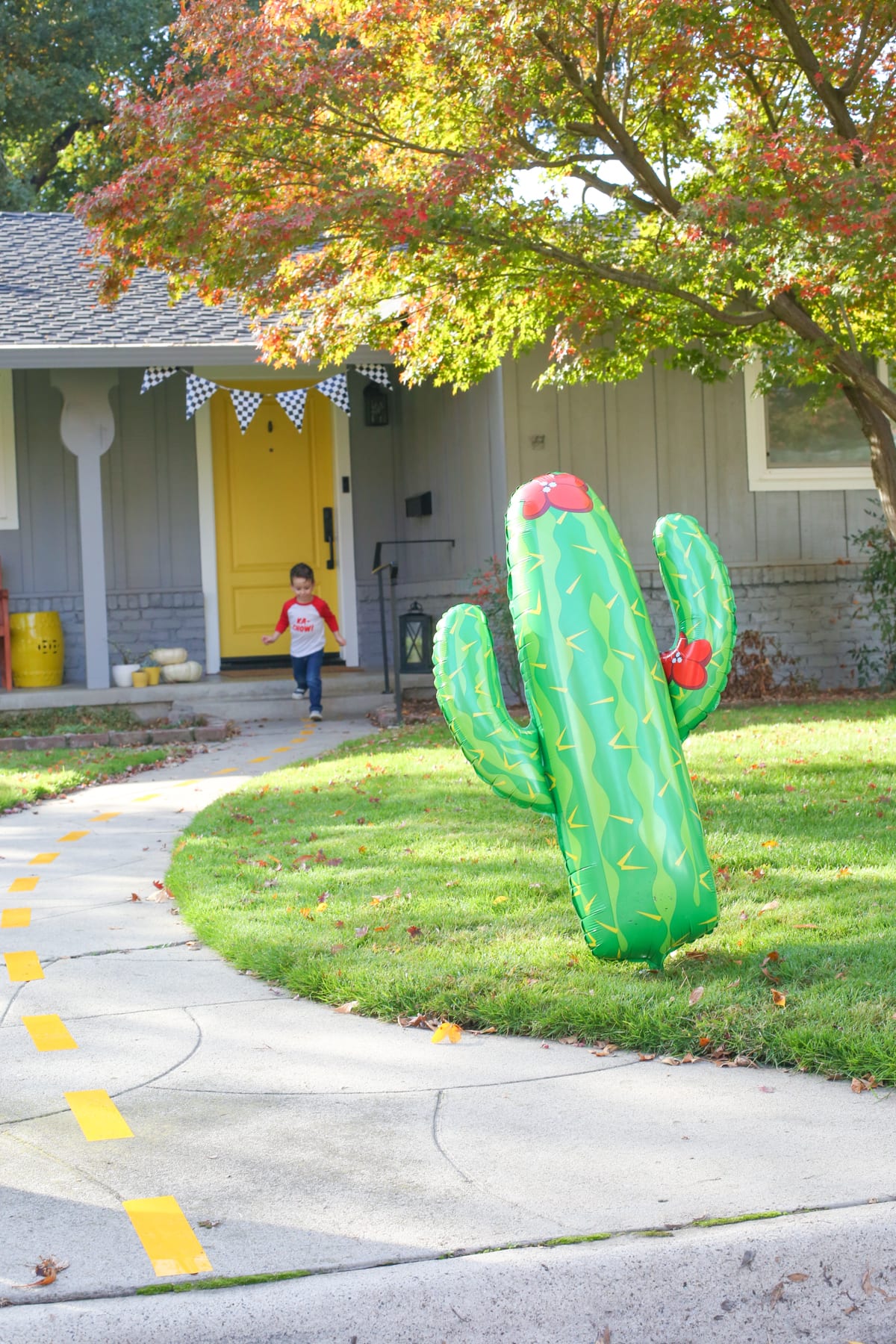 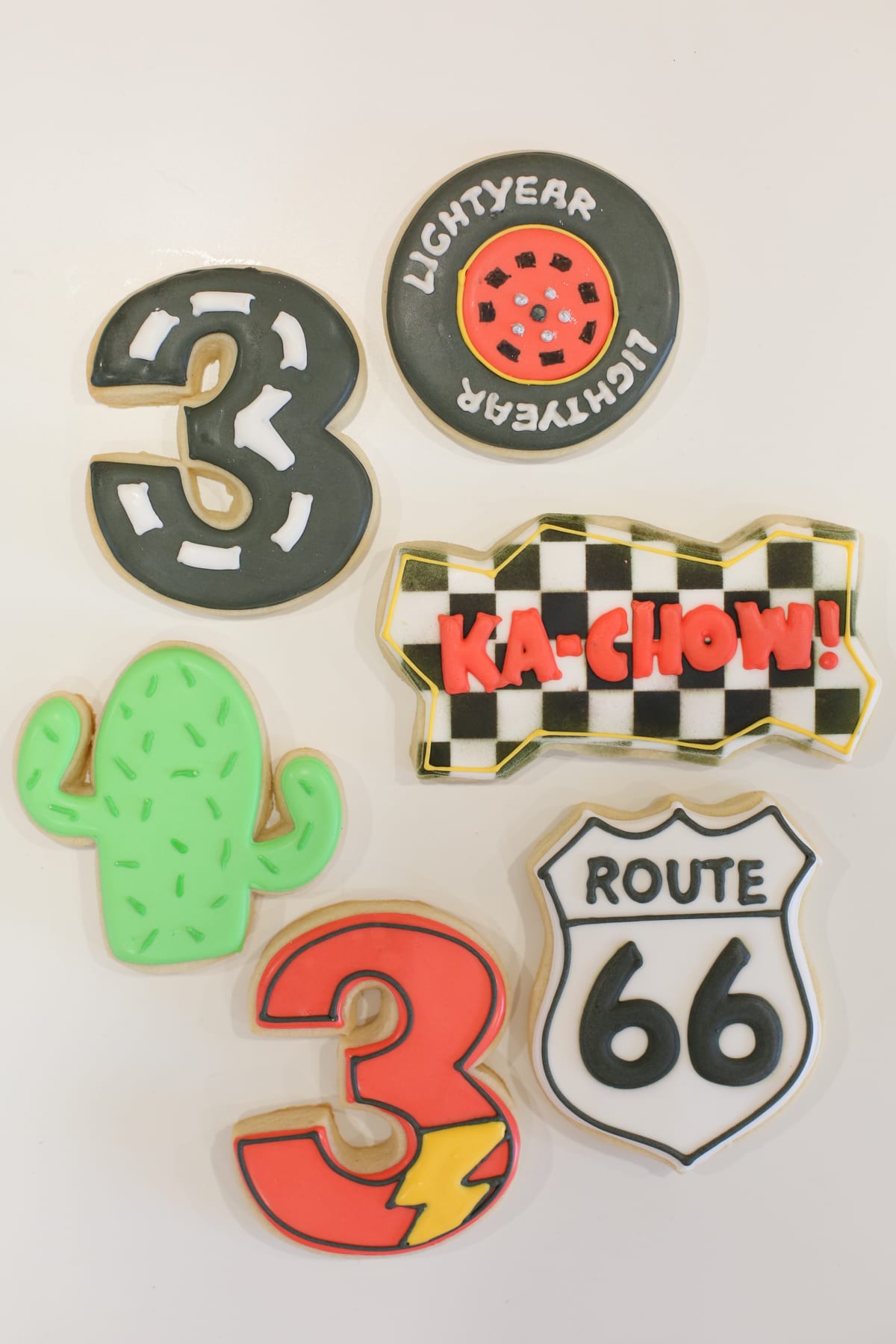 Oh, my heart. This boy of mine who made me a mama is three today, and I’m all sappy about it. When we asked him a couple of months back what kind of birthday party he wanted, he responded without hesitation that he wanted a Pixar Cars third birthday party. And while I’m not huge on branded characters, how can you deny a boy his birthday dreams?! Also, if we’re going with characters, at least he’s got his priority straight and picked a Pixar movie. 😉

So we did it! I leaned into the Radiator Springs thing a little more than actual characters, so the party overall would just have a Cars “vibe.” We decorated with racing flags, balloons, cacti, and lots and lots of traffic cones. Read on for the how-to on all of the details we added.

Route 66 Sidewalk I wanted something fun out in front of the house to welcome our guests. So we cut up some strips of yellow vinyl

and made a dotted line on the sidewalk to look like a road. We had two cactus balloons

flanking the front walk, and a racing flag garland

at the front door. In a blast of last-minute genius, Ryan decided we should have a Route 66 sign so we made one the morning of the party out of foam core and used the Cricut

machine to cut out the lettering. 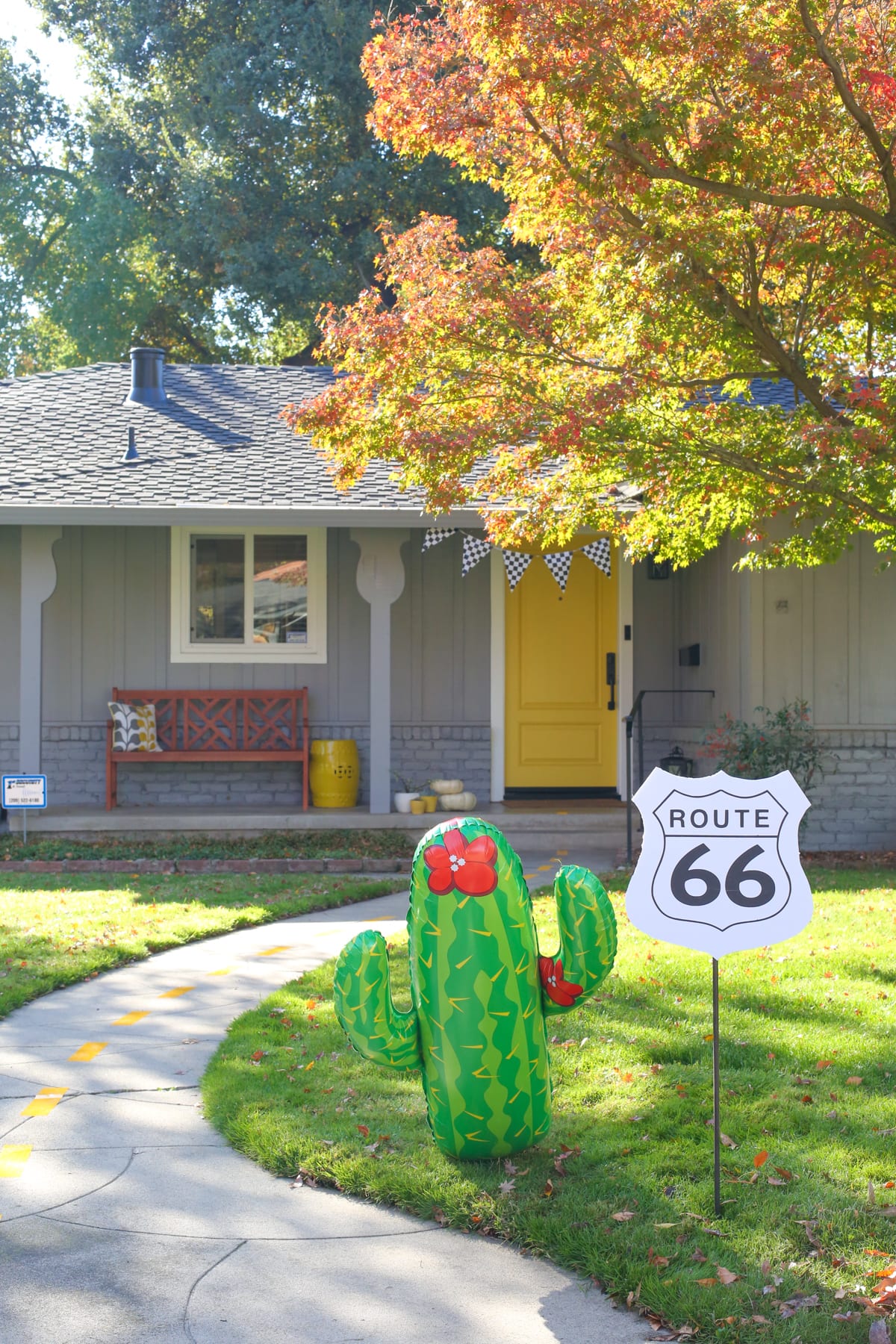 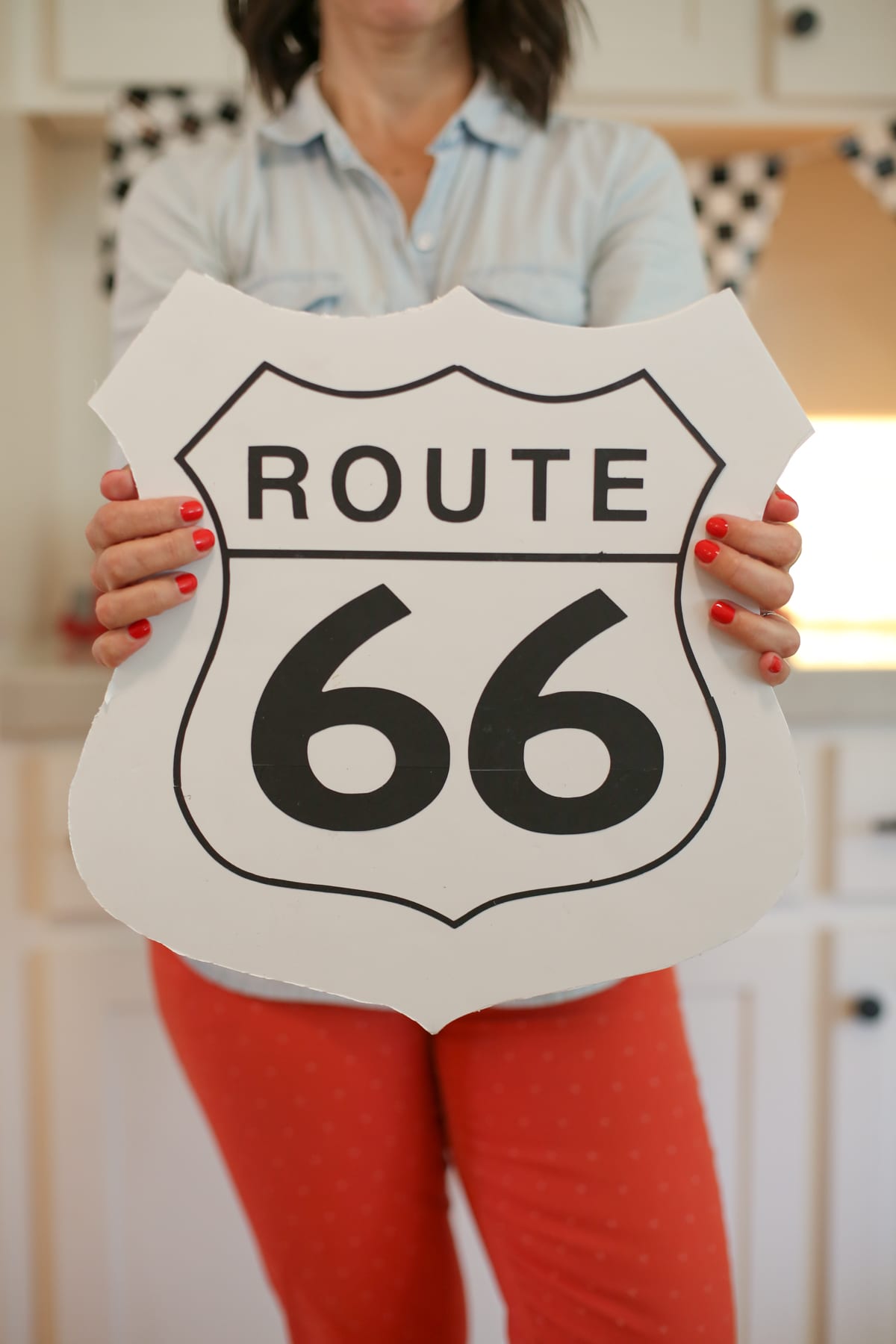 Ka-Chow Baseball T-Shirt I got a plain red baseball t-shirt for Henry at Old Navy, used the Cricut

to cut out “Ka-Chow” from stencil paper

, and stenciled on the words using red fabric paint

. (The font is Komika, in case you’re wondering.) 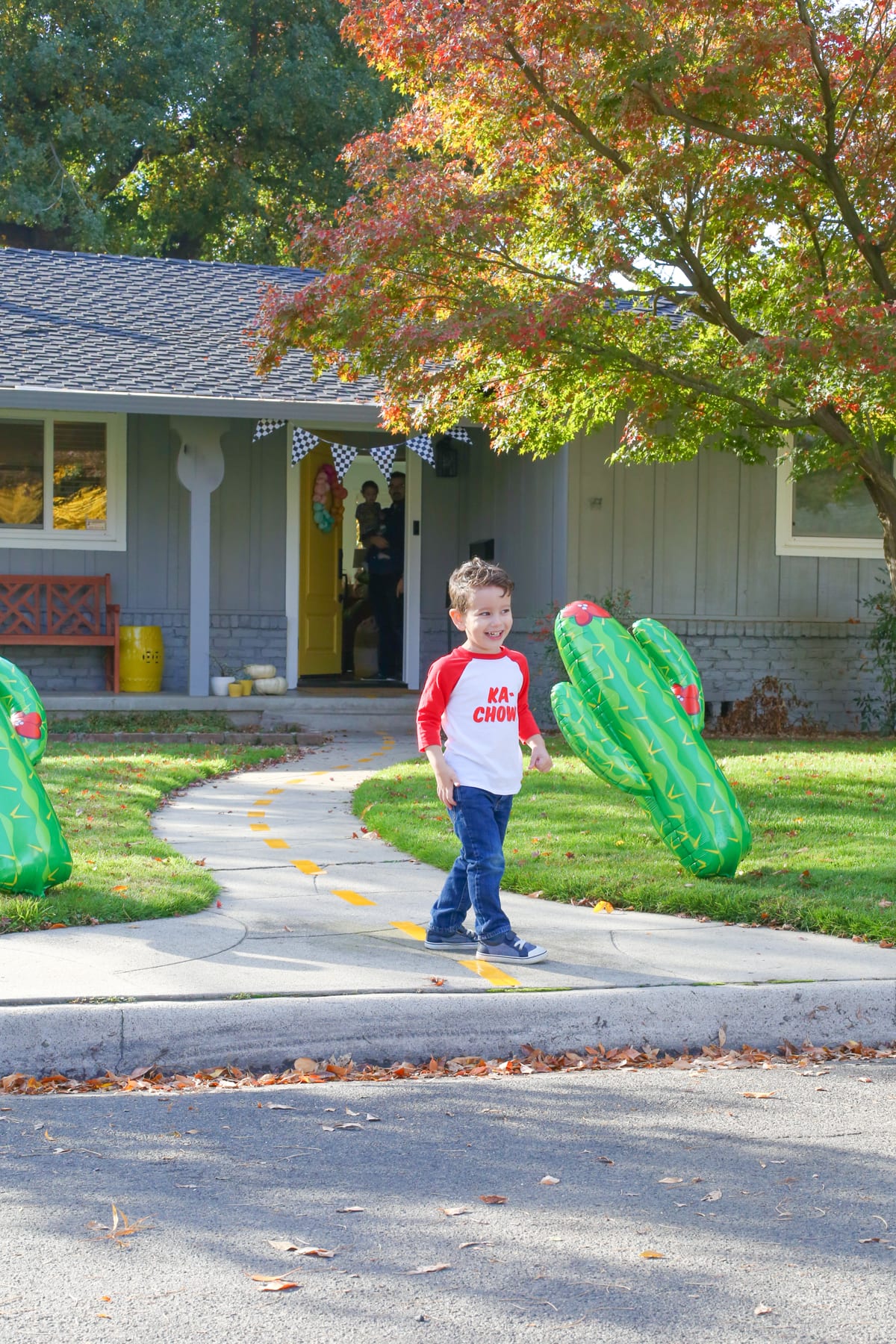 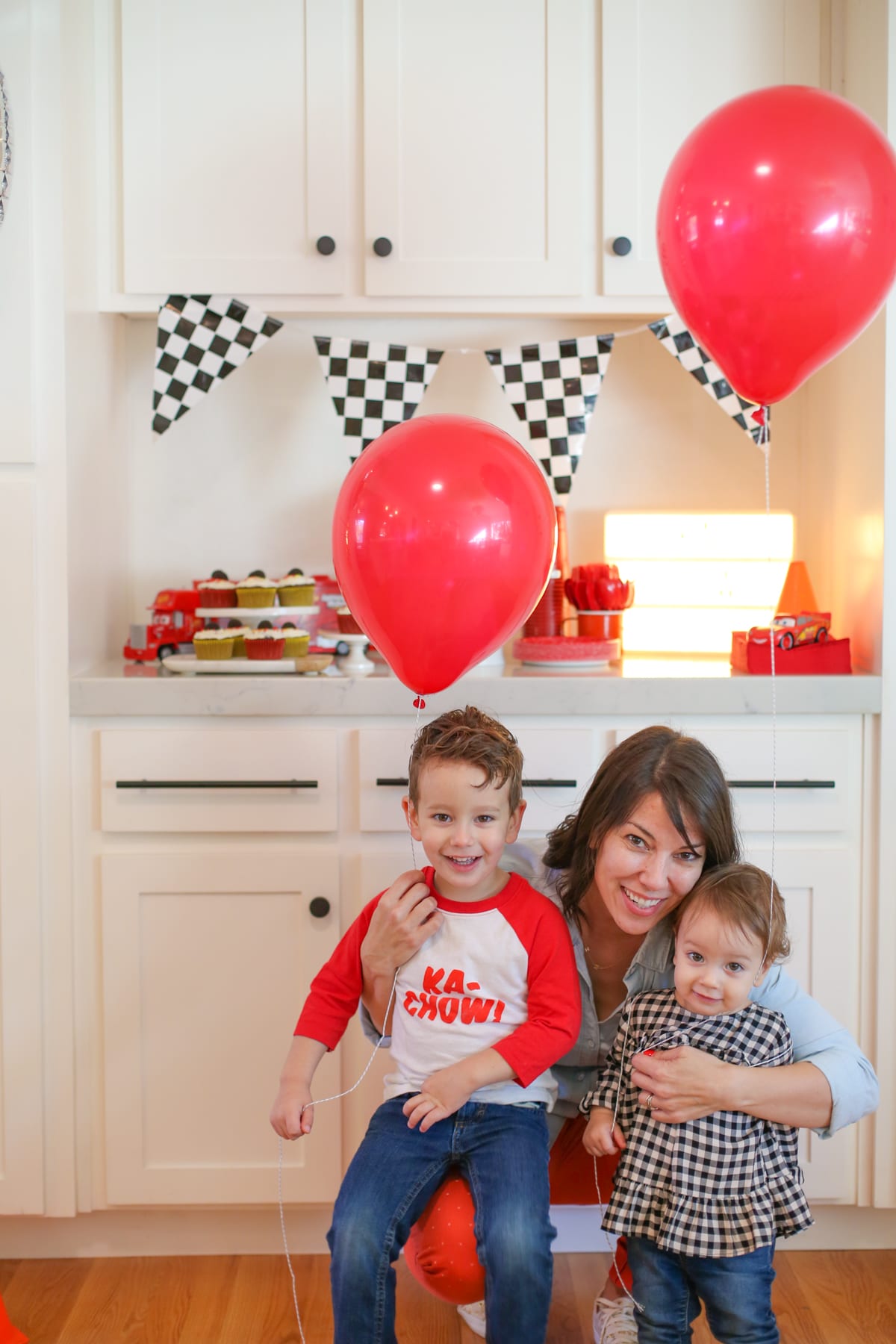 A Simple Lightning McQueen Cake I always make my kids’ birthday cakes (hello, Betty Crocker box mix!) and just decorate them with something fun. We baked a triple-layer chocolate cake that was super crooked, but Henry never noticed. 😉 Red and yellow sprinkles

went on top, and regular and mini Oreos

were piled in the center to kind of look like tires. Then I used Henry’s little Lightning McQueen toy

car as a topper (spread a little frosting on the bottom to get him to stick if you try it out). We used tall gold foil candles as well. The cupcakes were similar; they each had one Mini Oreo in the center. 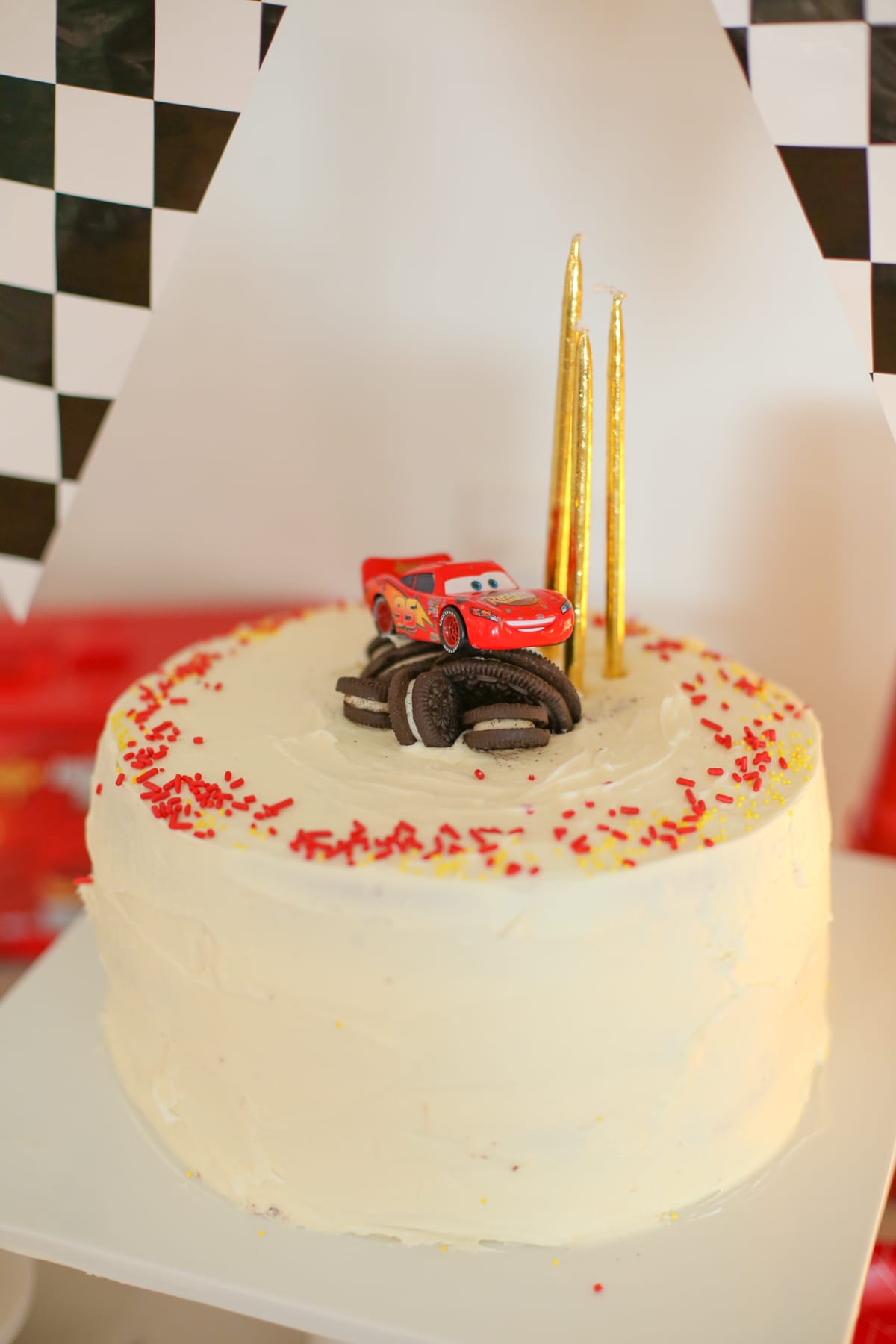 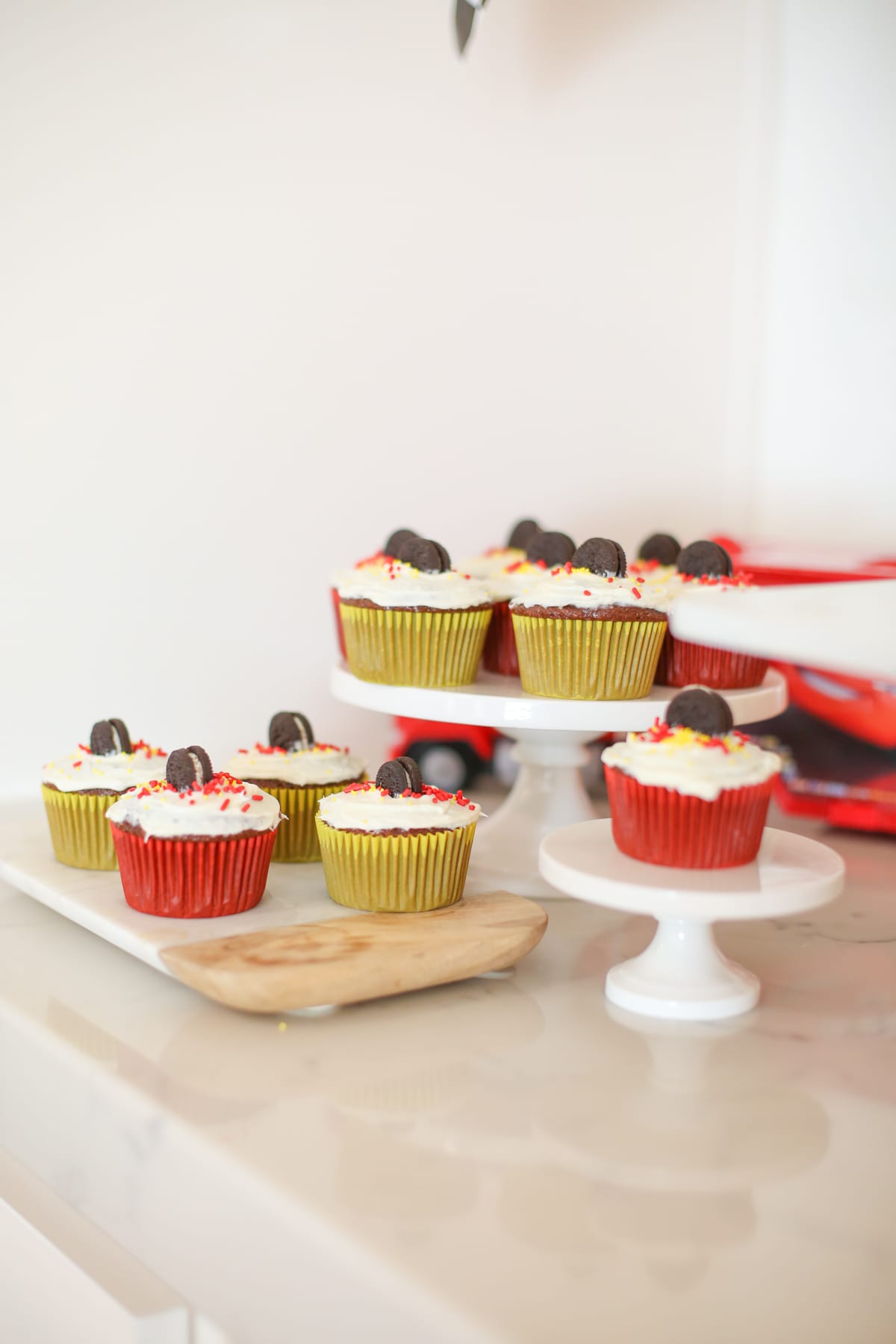 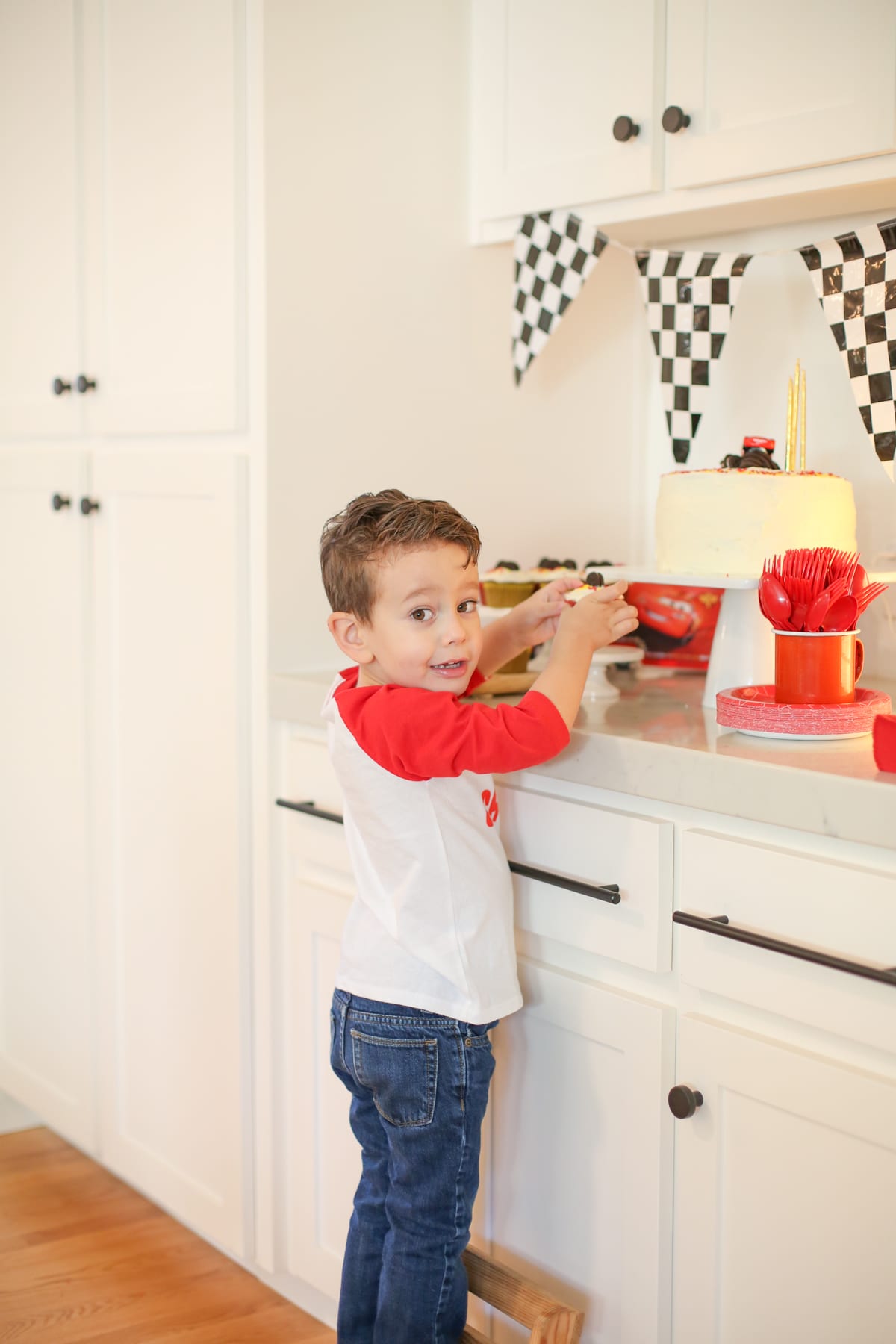 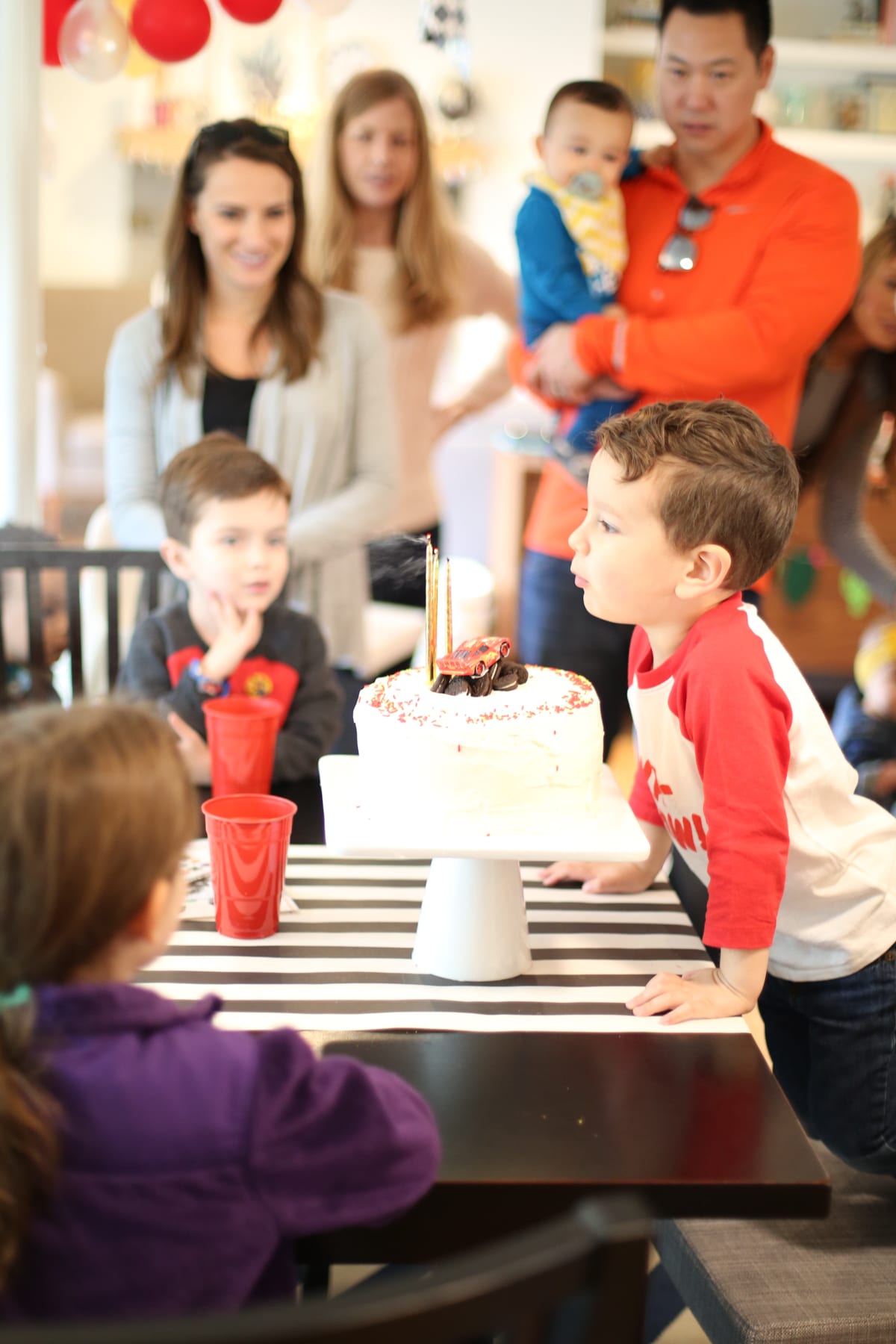 Balloon Garland I just repeated the same type of DIY balloon garland that we did for Maggie’s birthday! We’ll have a tutorial coming up on that soon. We also had a big silver 3 balloon

floating around for fun. 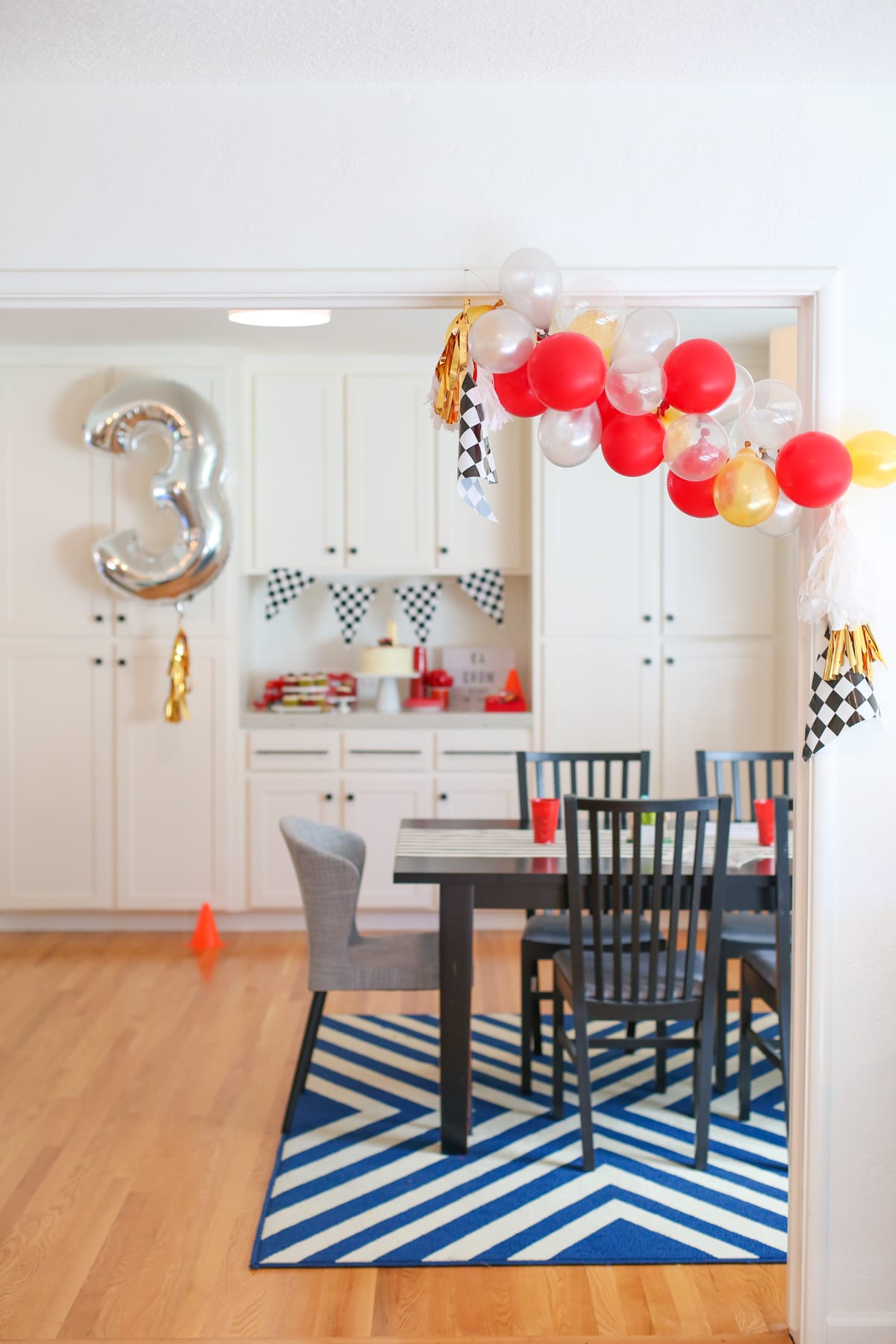 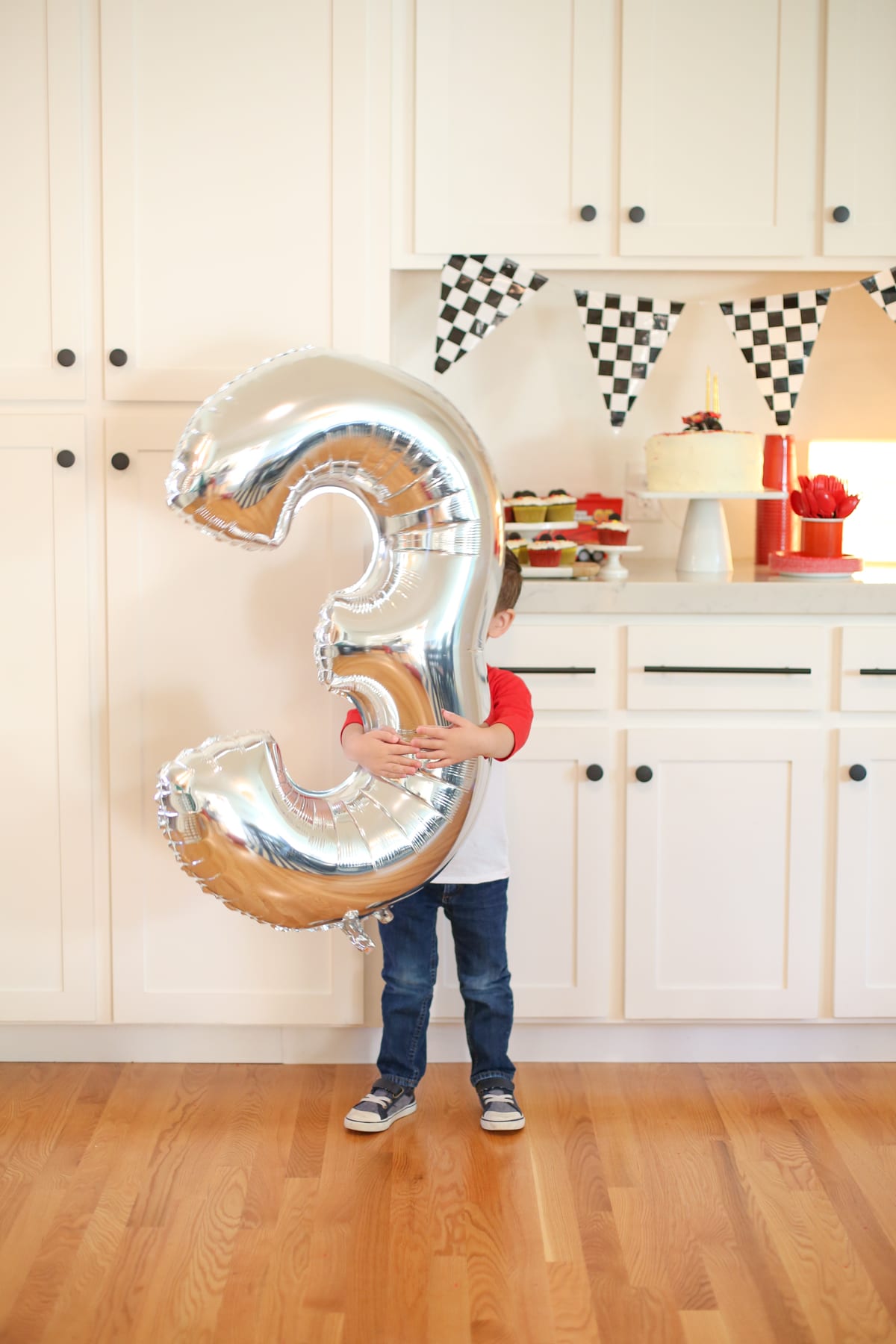 Traffic Cone Ring Toss We had some outdoor time to fill, so we got some toy traffic cones

, stuck them to the ground with stakes, and set out some rings for a ring toss. 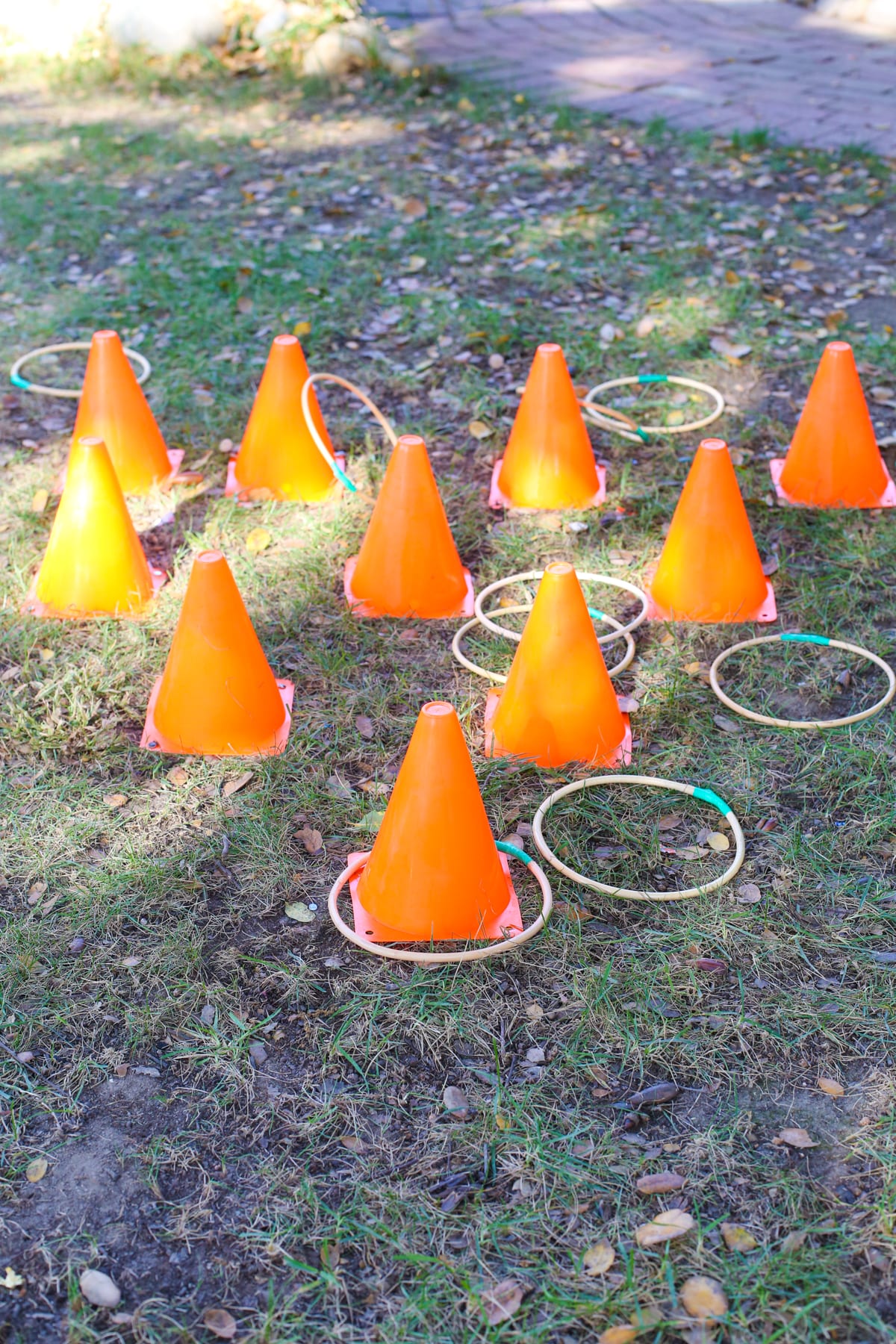 Coloring and Sticker Table This was super simple and a major hit. I bought one coloring book

and one sticker book

, and cut out the pages. One large pack of crayons was split up into a few cups along the table. Kids could come and do some coloring or stickers as they wanted. The center of the table was decorated with felt cacti and the toy signs from Henry’s wooden toy set 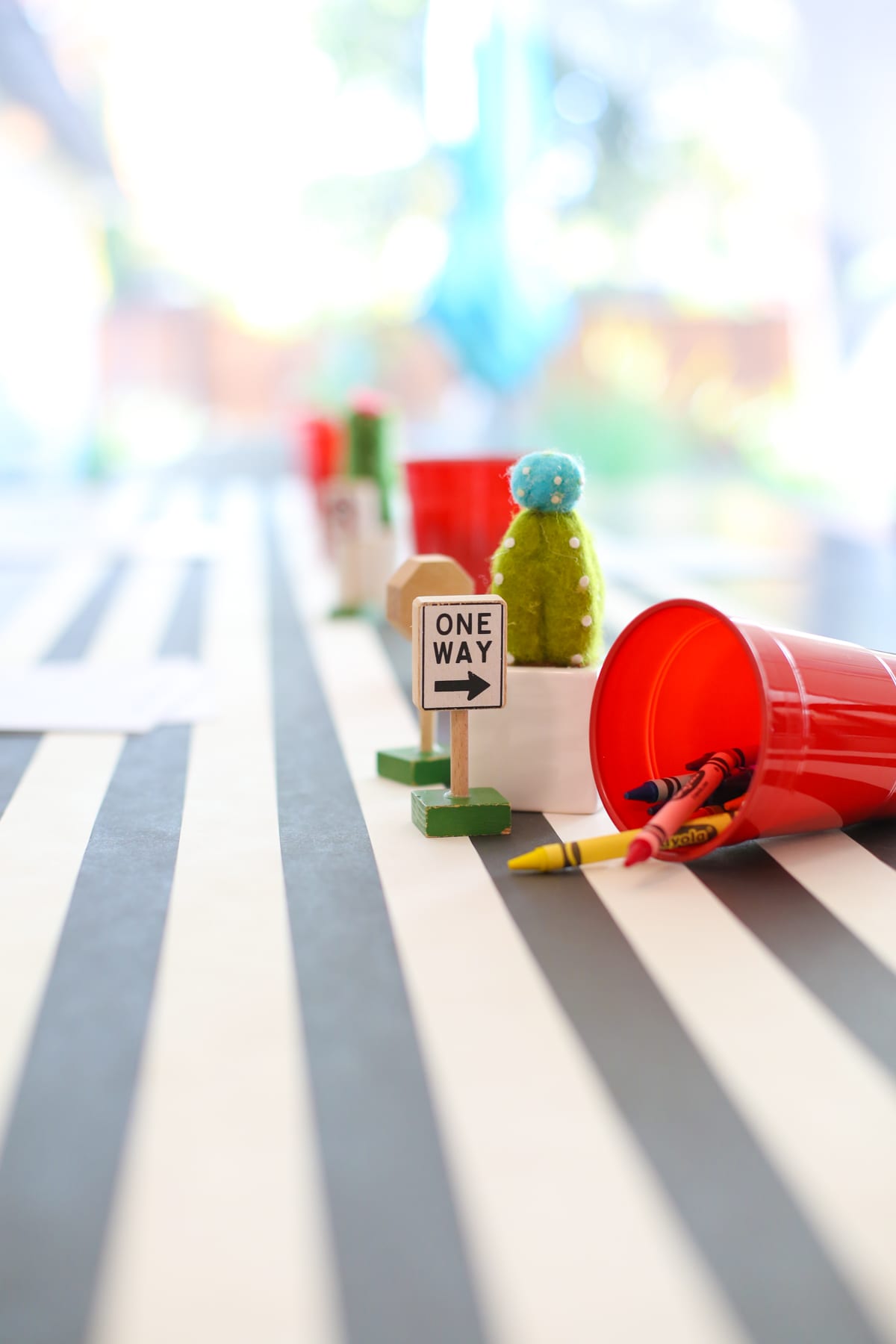 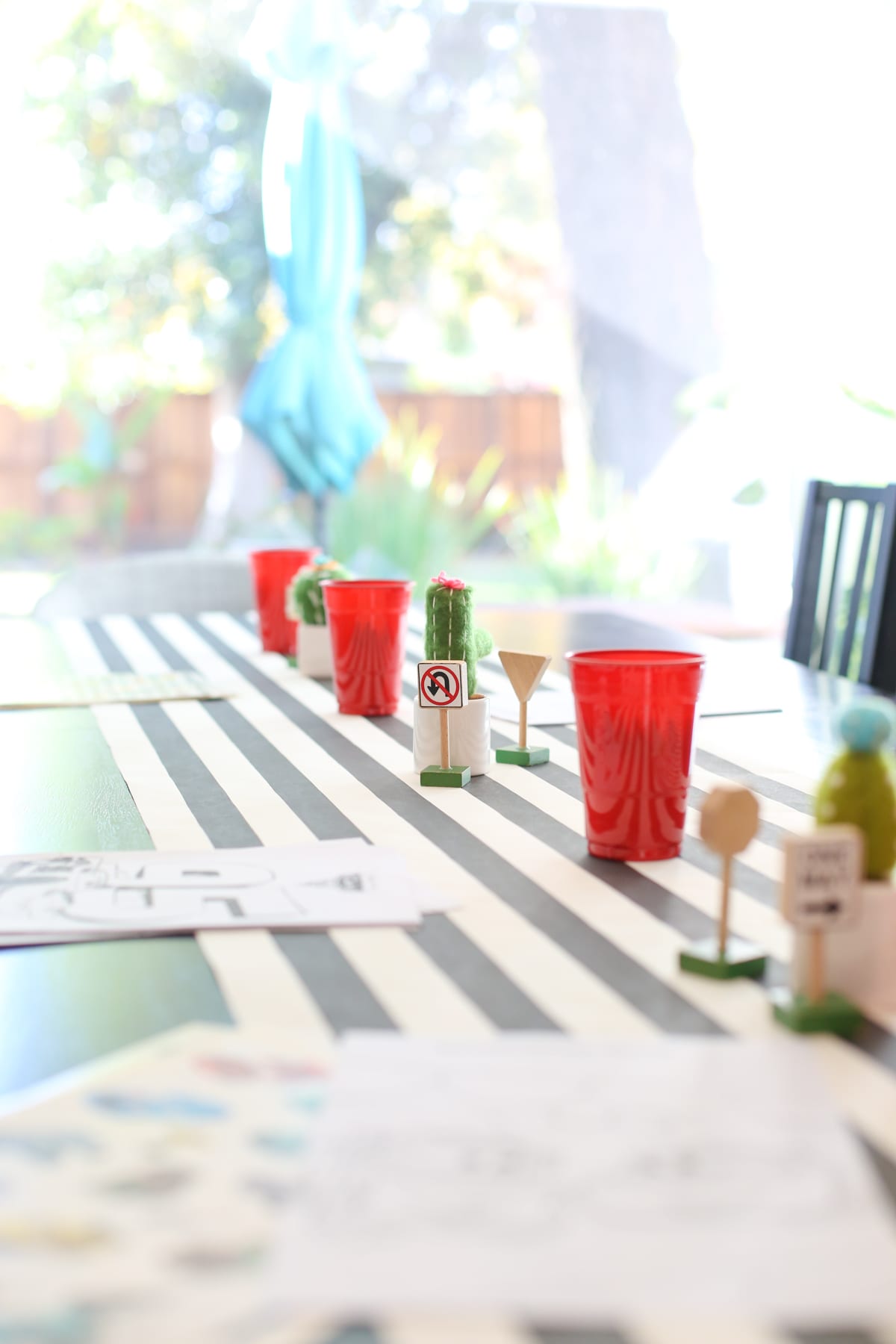 , and popped them in a gift bag with a mini Cars guy and a gorgeous cookie from Bird Treats. Grownups took home cookies too. 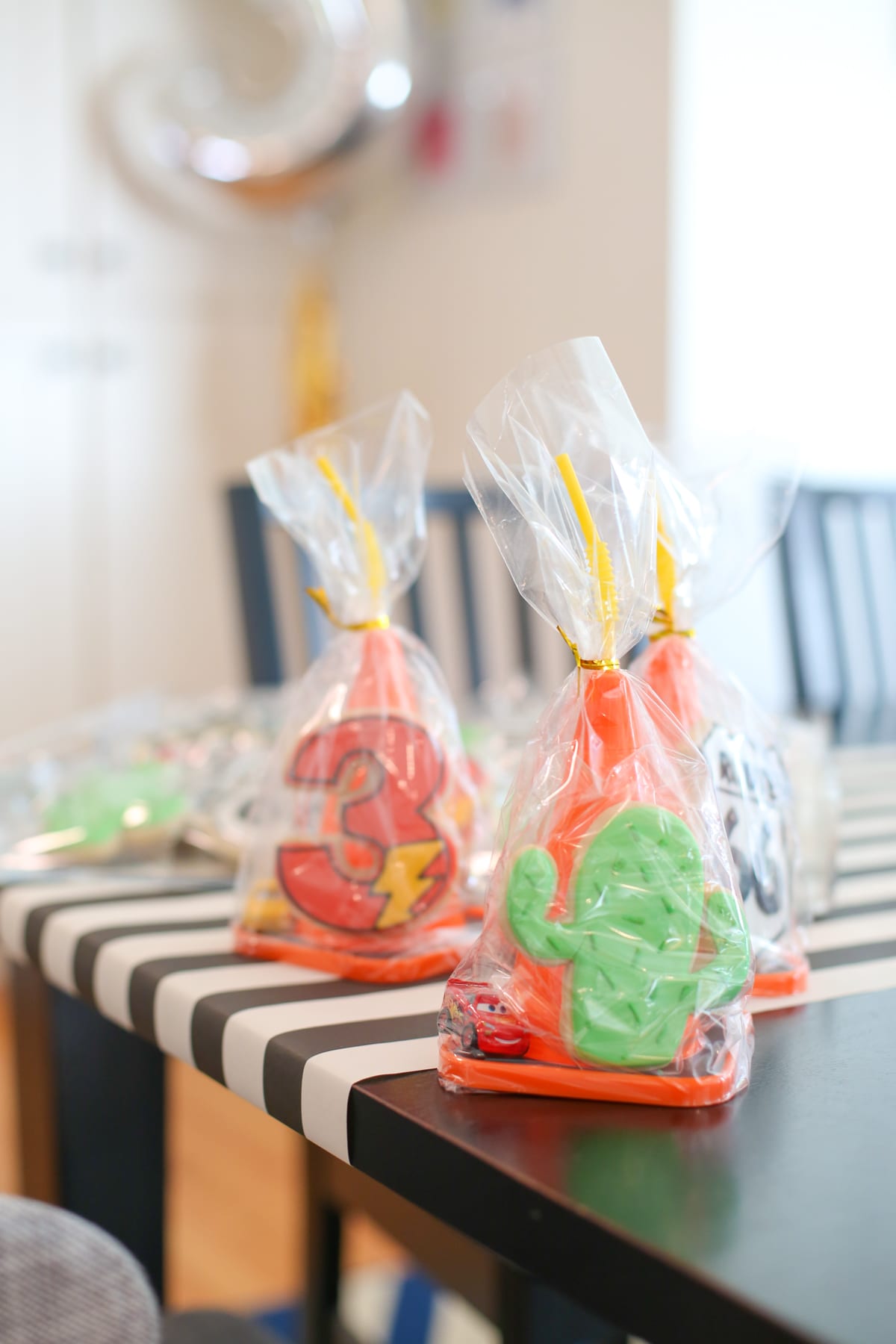 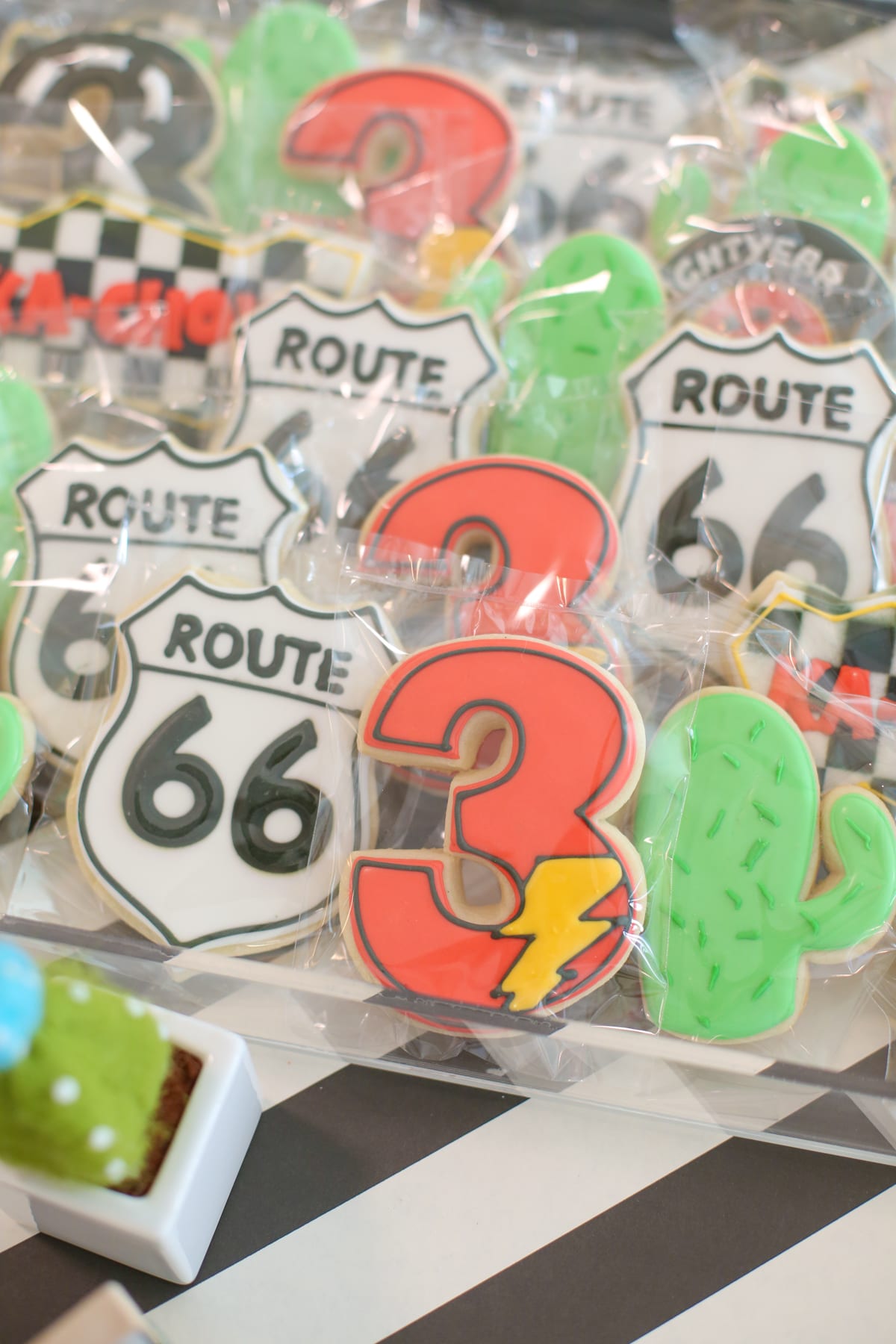 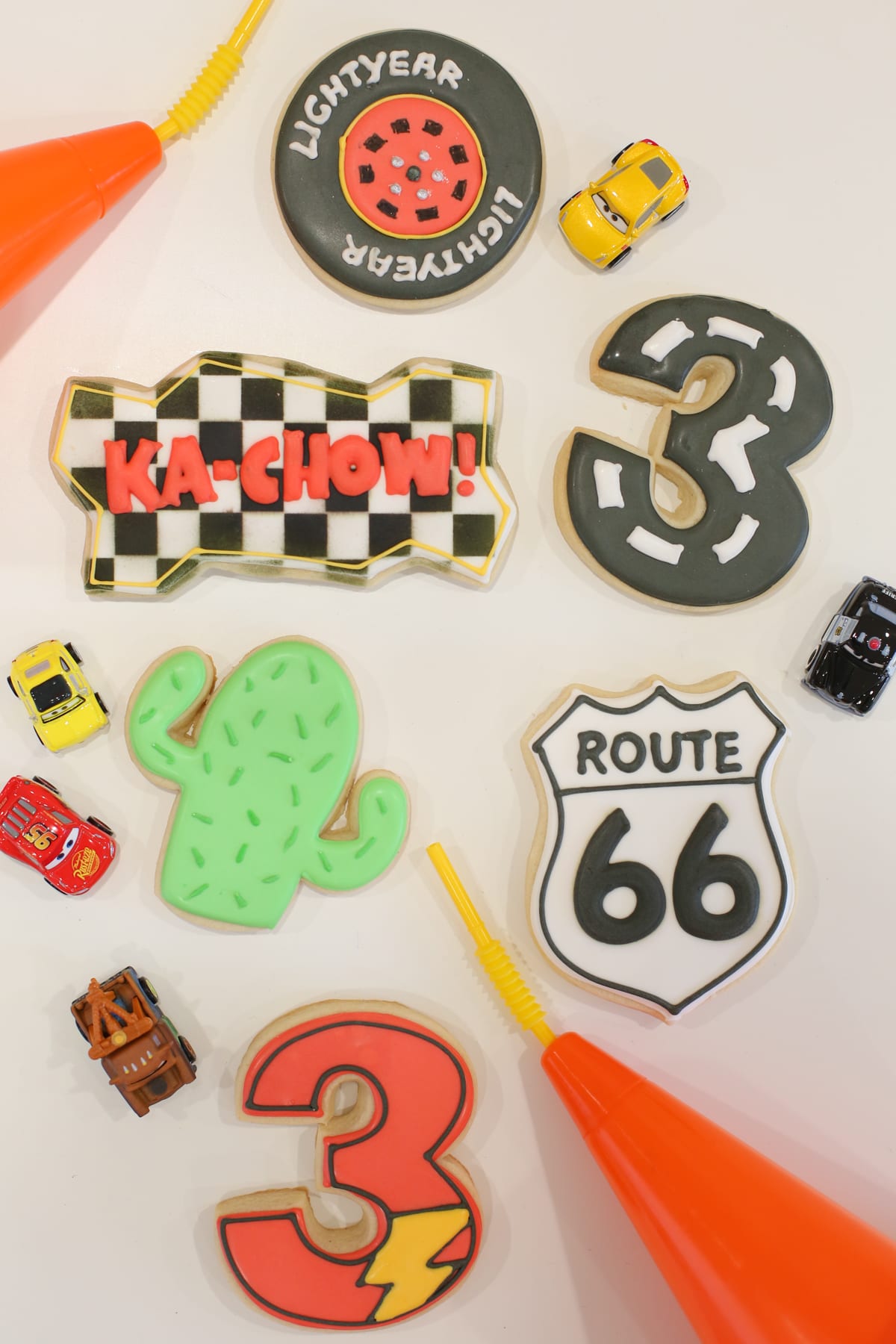 When In Doubt, Have In-N-Out We didn’t want to spend the whole party cooking, so we had In-N-Out delivered! It was kind of perfect. I had prepped some red food baskets with basket liners

and we just popped the fries and burgers in. Kids got plain cheeseburgers and grownups got the works. If you do this, be sure to grab a bunch of the tiny ketchup cups too! You can fill them from your ketchup bottle at home. It was super handy. (I promise, we had fruit as well…) 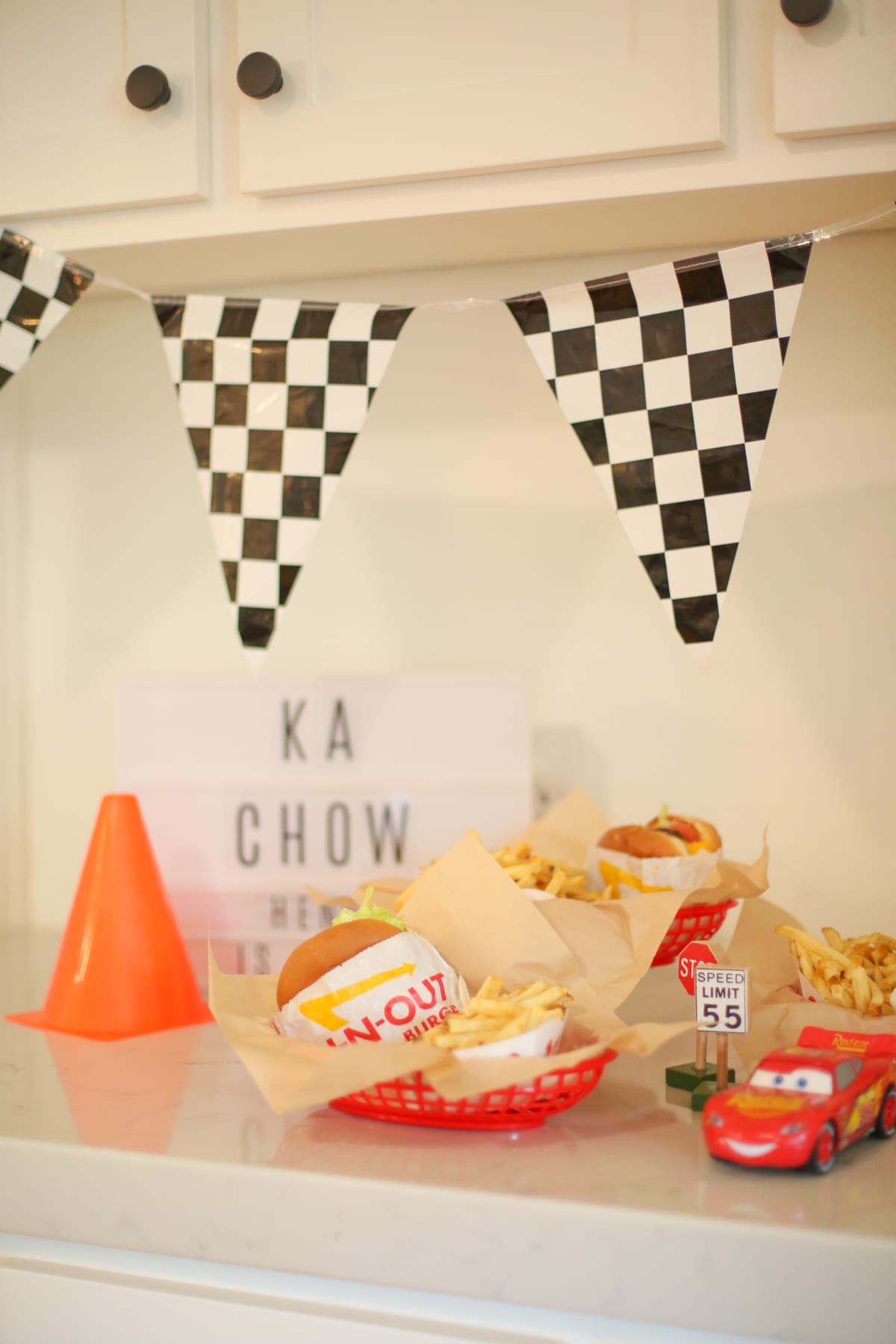 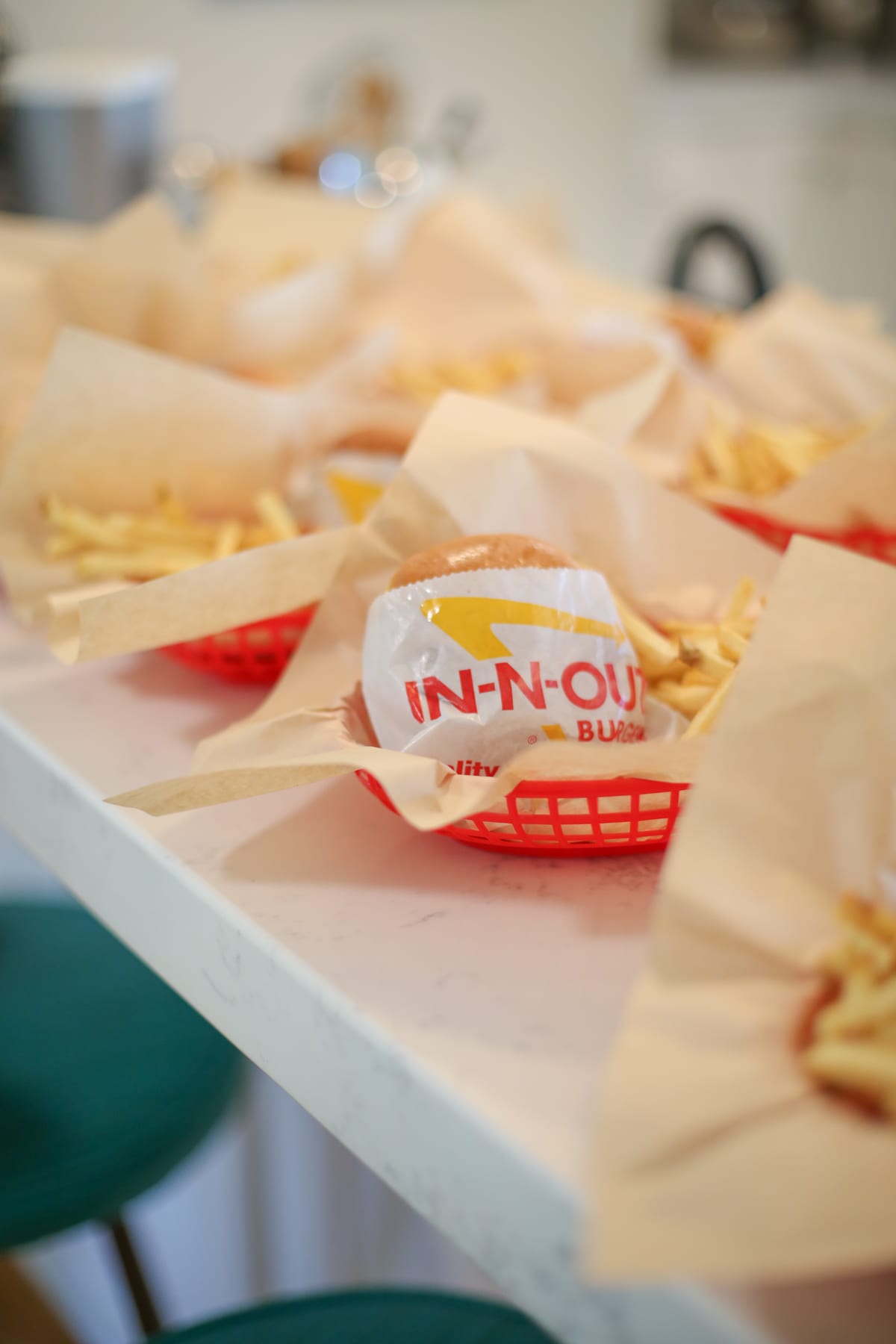 And that’s it! Henry was over the moon to have all his friends together, and just ran around all morning without stopping for anything but cake. I’m sure every mom feels this way, but I’m just so blessed by this little boy. His excitement for life is contagious and he surprises me every day. We love you, Hank! xoxo