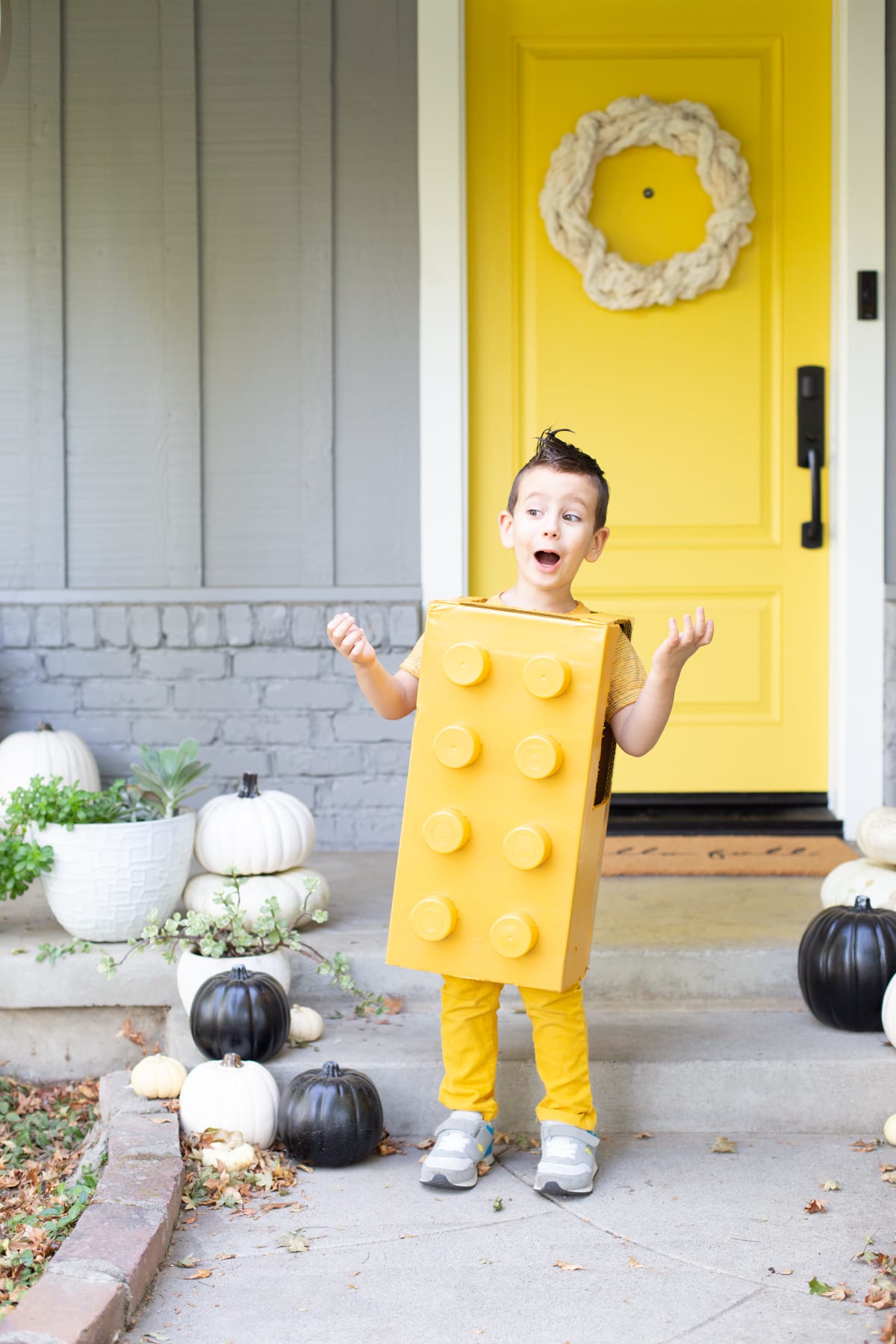 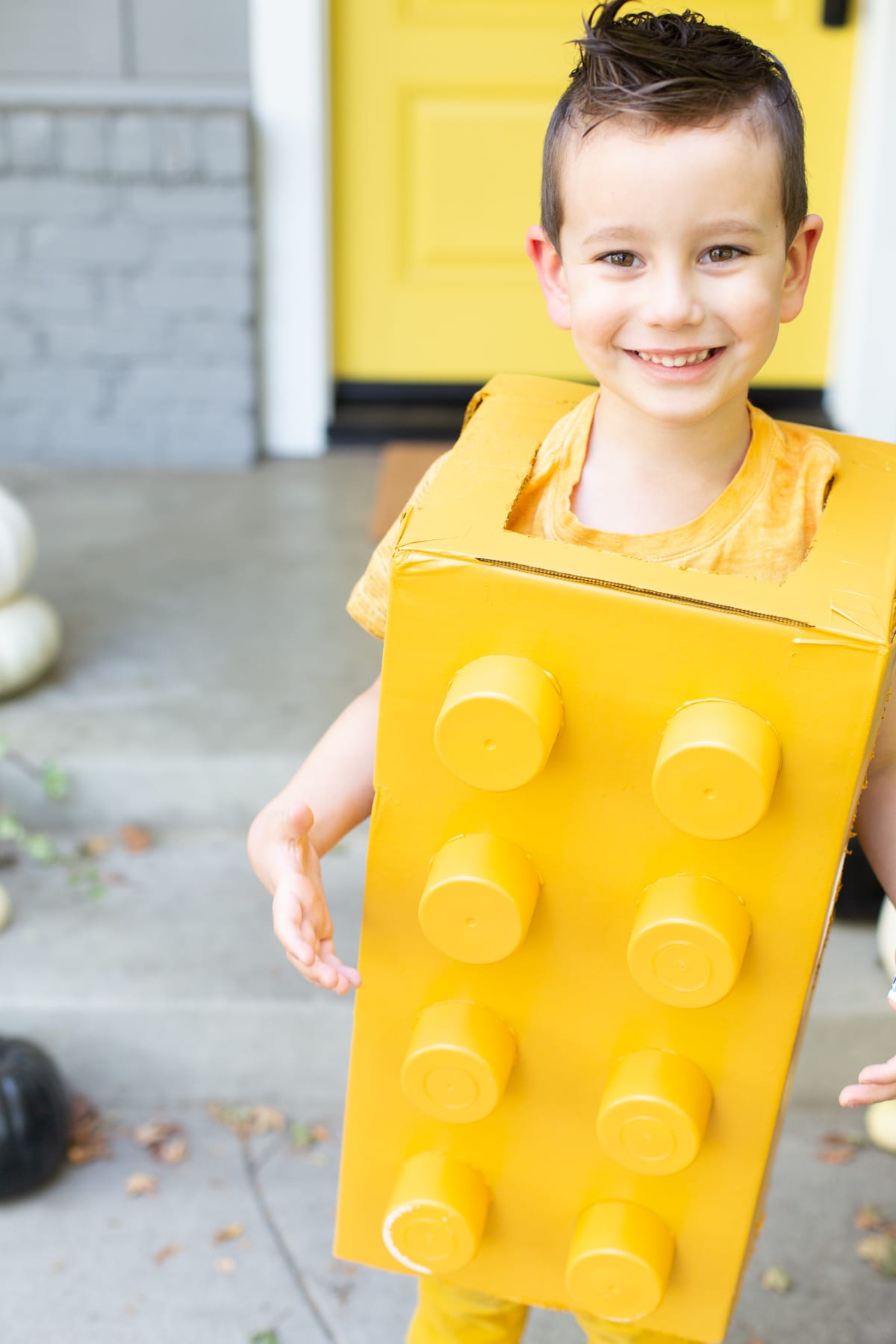 Confession. We were invited to a kids’ Halloween party earlier this week and completely forgot about it until the night before! October has definitely chewed me up and spit me out. Luckily our friends reminded us about the party, but our family costume wasn’t ready whatsoever so we had to find a last minute substitution. Maggie has a little ballerina dress that she loves, so that was a no brainer. But we were stuck on Henry. He had been playing Legos all day and I randomly blurted out, “Wanna be a Lego?!” And he was like DUH MOM YES. So we figured out how to make a Lego Halloween costume in about an hour flat. And it’s adorable!

How to Make a Lego Halloween Costume

Step 1: Find a box! We happened to have the perfect size box laying around for Henry to fit in (shout out to Cricut, hayyyy), but you can find whatever box works best for the body type of the person you’re costuming. You could also just use flat cardboard and fold it into a box, or make the costume sandwich board style. 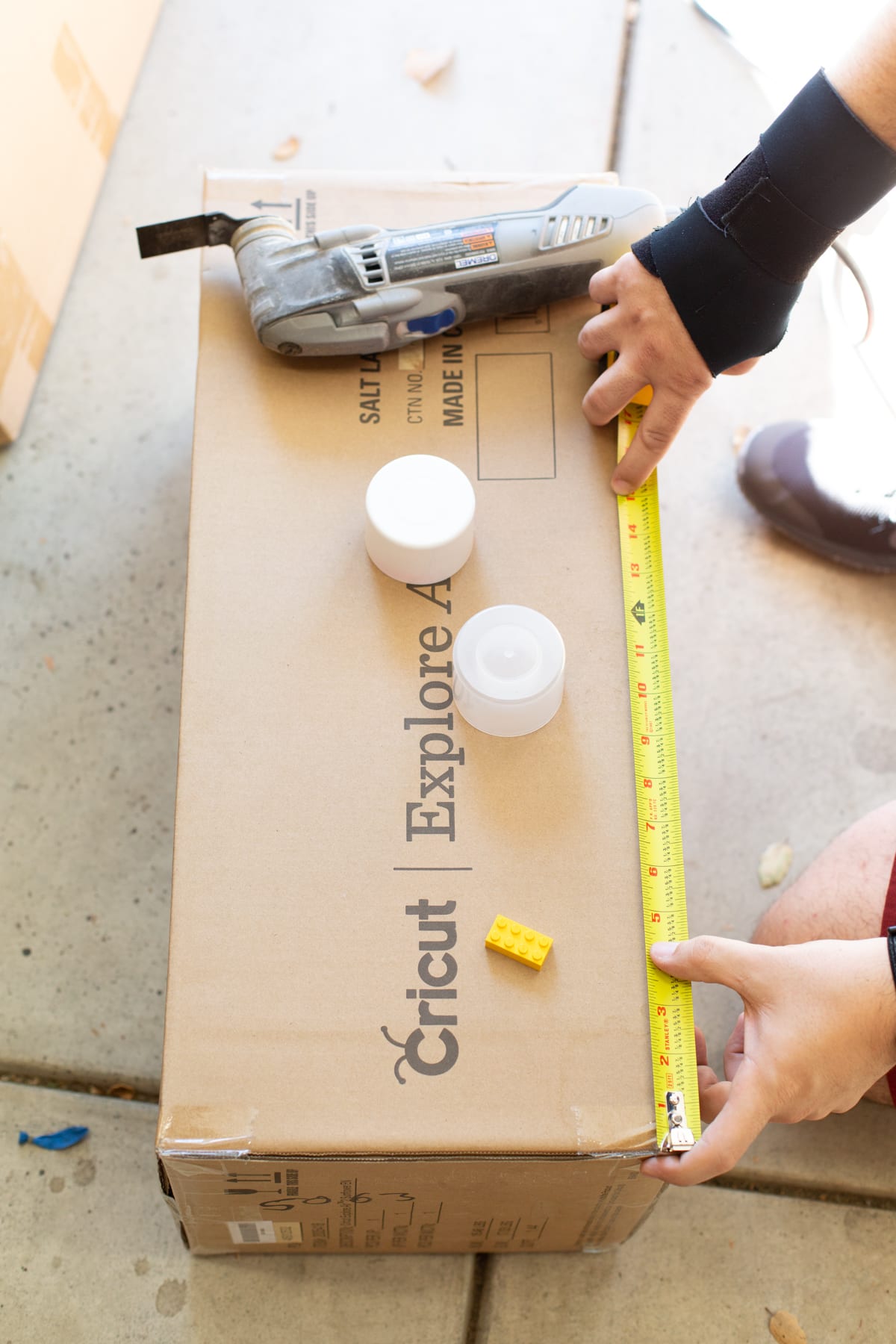 Step 2: Cut out head and arm holes. You want to cut the head hole big enough for the head to fit through but not so wide that it will slip off the shoulders. We also cut off arm holes that were pretty tall to allow for maximum arm movement. Also cut off any excess length on the box; you want it to end above the knee so that walking is easy. 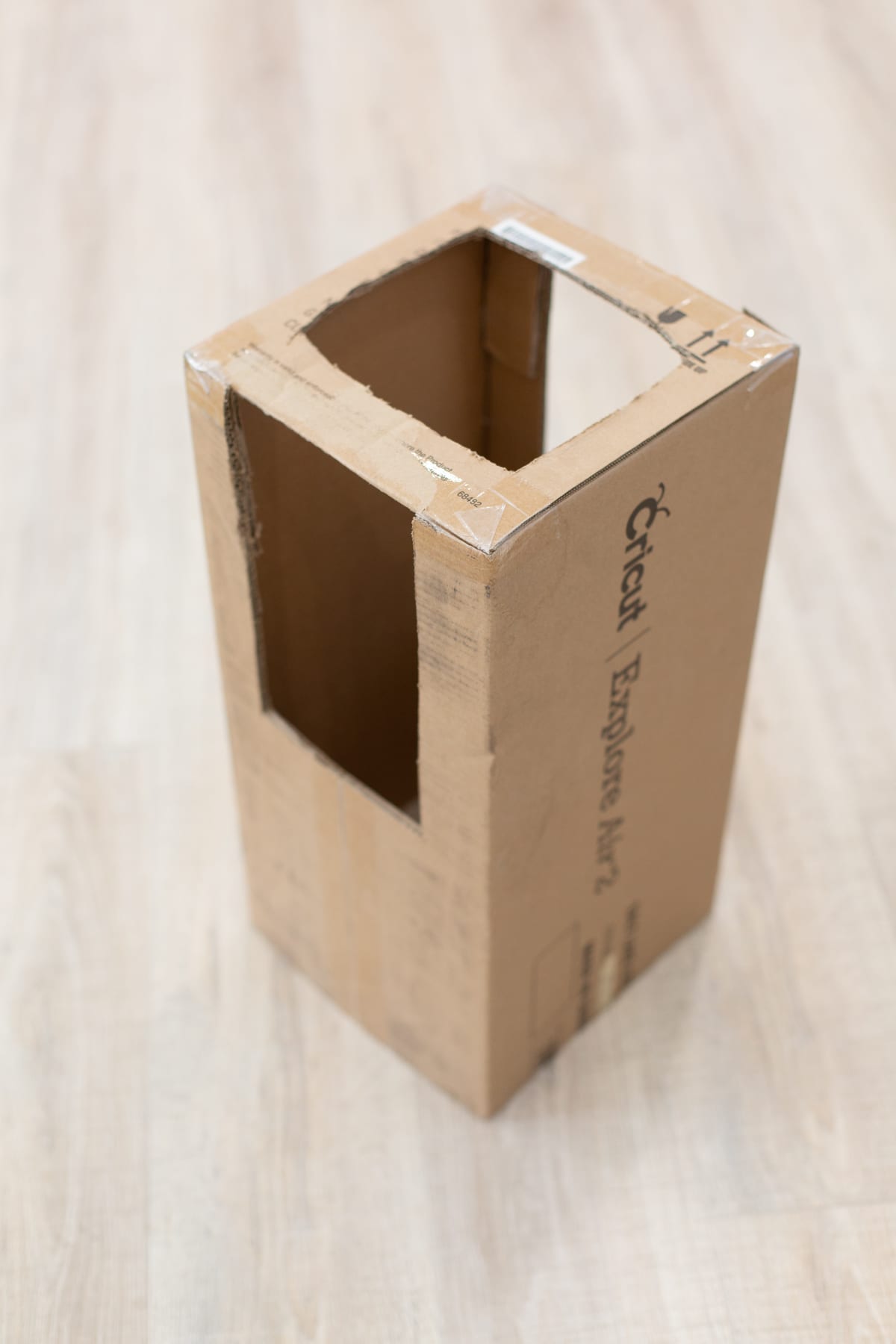 Step 3: Glue on the circles. We happened to have a bunch of spray paint can lids that were just the right size. But you could also slice up a pool noodle or a cardboard tube, then cover the ends with circles of cardstock. (Be creative here! There are a million things you could use for the circles! We almost used little disposable paper bowls too but these had a better shape.) Place a line of hot glue around the bottom of the circles and glue them into place on the front of the cardboard box. 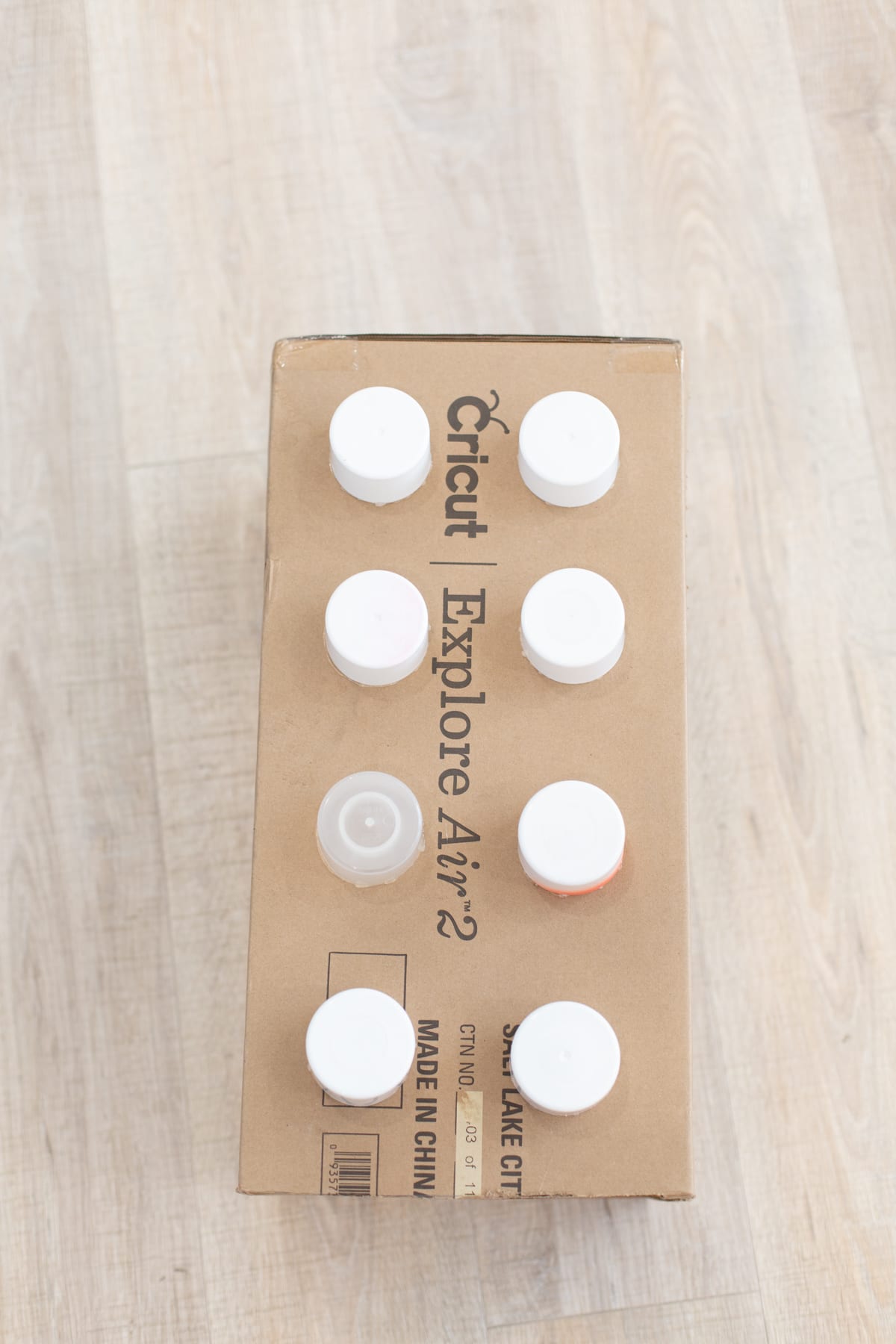 Step 4: In a well-ventilated area, spray paint the costumes using multiple light coats. You want to apply light coats to avoid dripping and allow for quick drying times. We applied three coats and then left the box outside to dry and cure, and to make sure the spray paint smell was gone. I actually helped it along a little bit with a hair dryer on the hot setting to cure the paint. 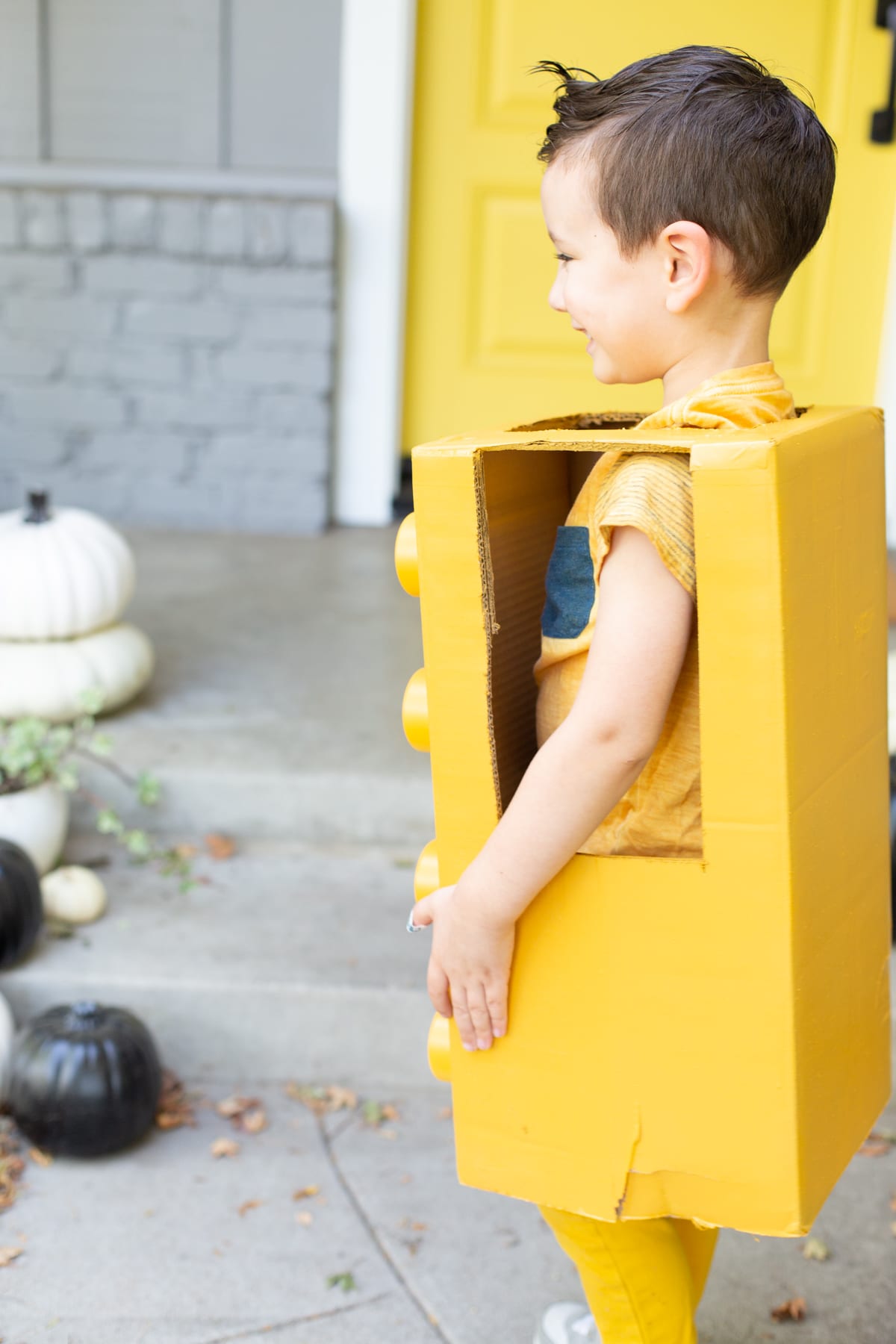 Step 5: Put it on! Really, you don’t need anything else for the costume. But if you want to match your outfit color to the color of your Lego, go for it!

Henry had requested to be a yellow Lego so he could “light up the night,” (where do they come up with this stuff?!), and we happened to have yellow pants and shirt to go with it. One thing to note about this costume — if it goes past the kiddo’s waist, he won’t be able to sit in it. So Henry wore it while he was running around, dancing, playing, and that kind of stuff, and then took it off to sit and eat. It’s really easy and fast on-off so it’s no problem to switch it throughout the night.

Would love to see you try this one! If you give it a shot, share photos with us on social! xoxo 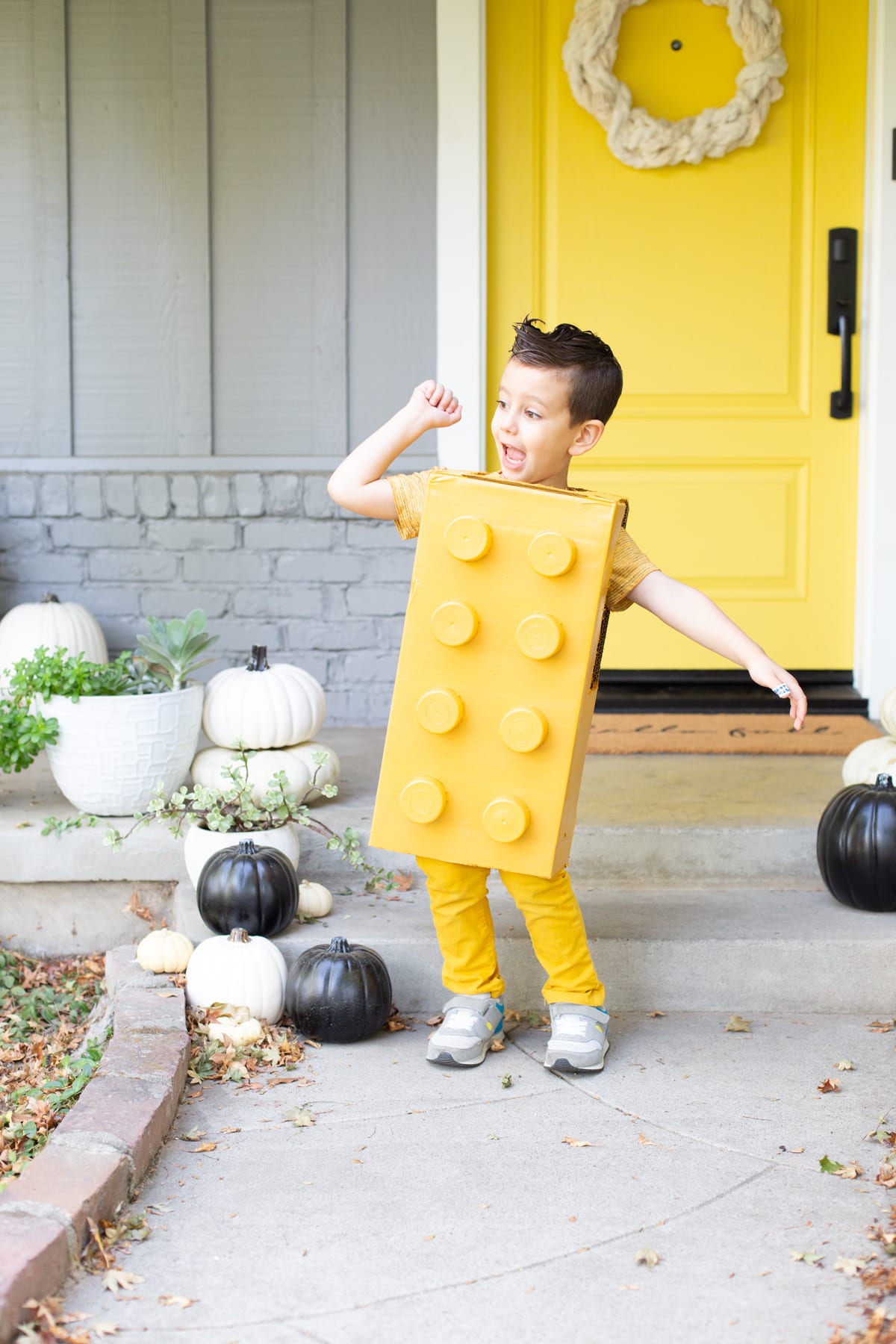 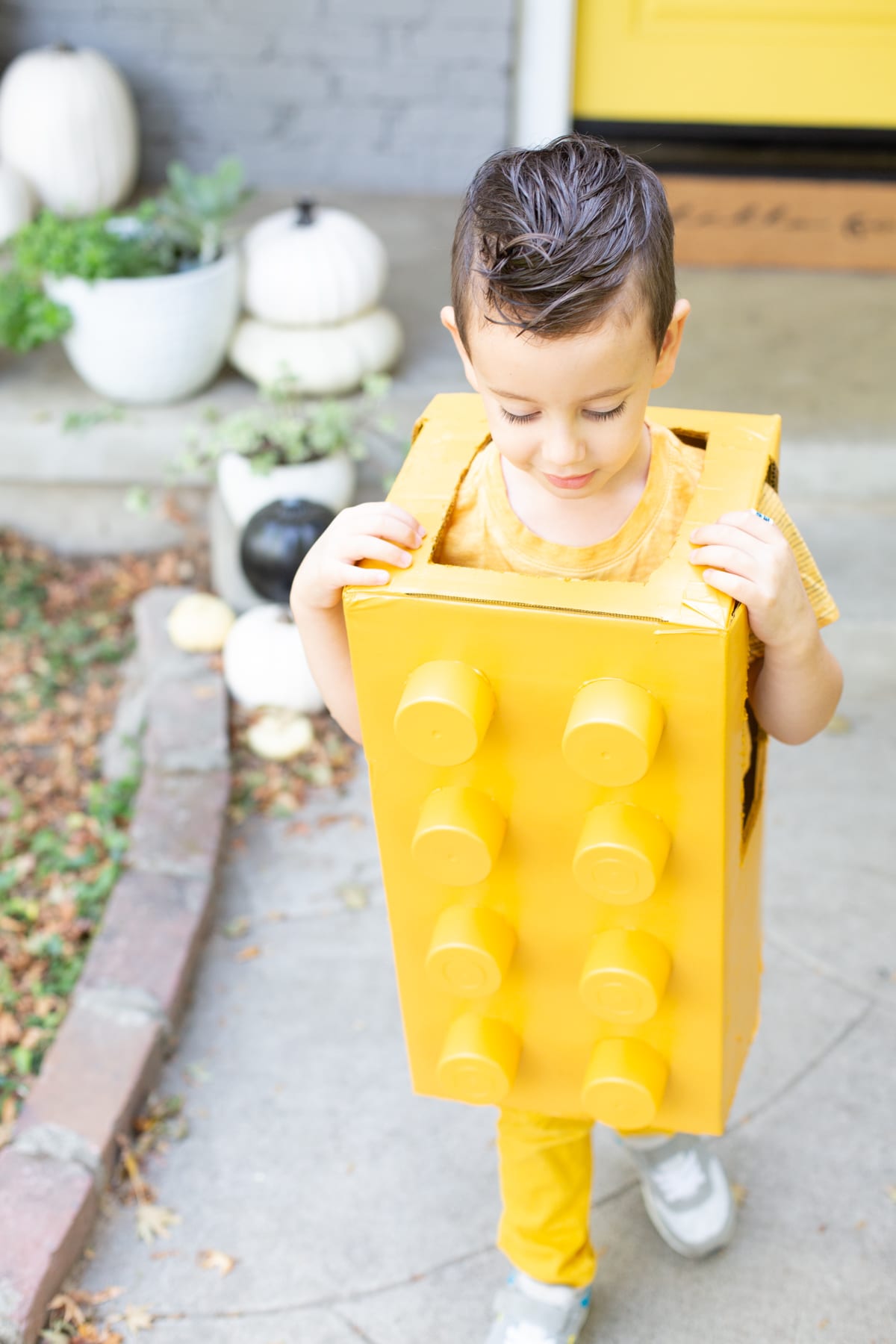 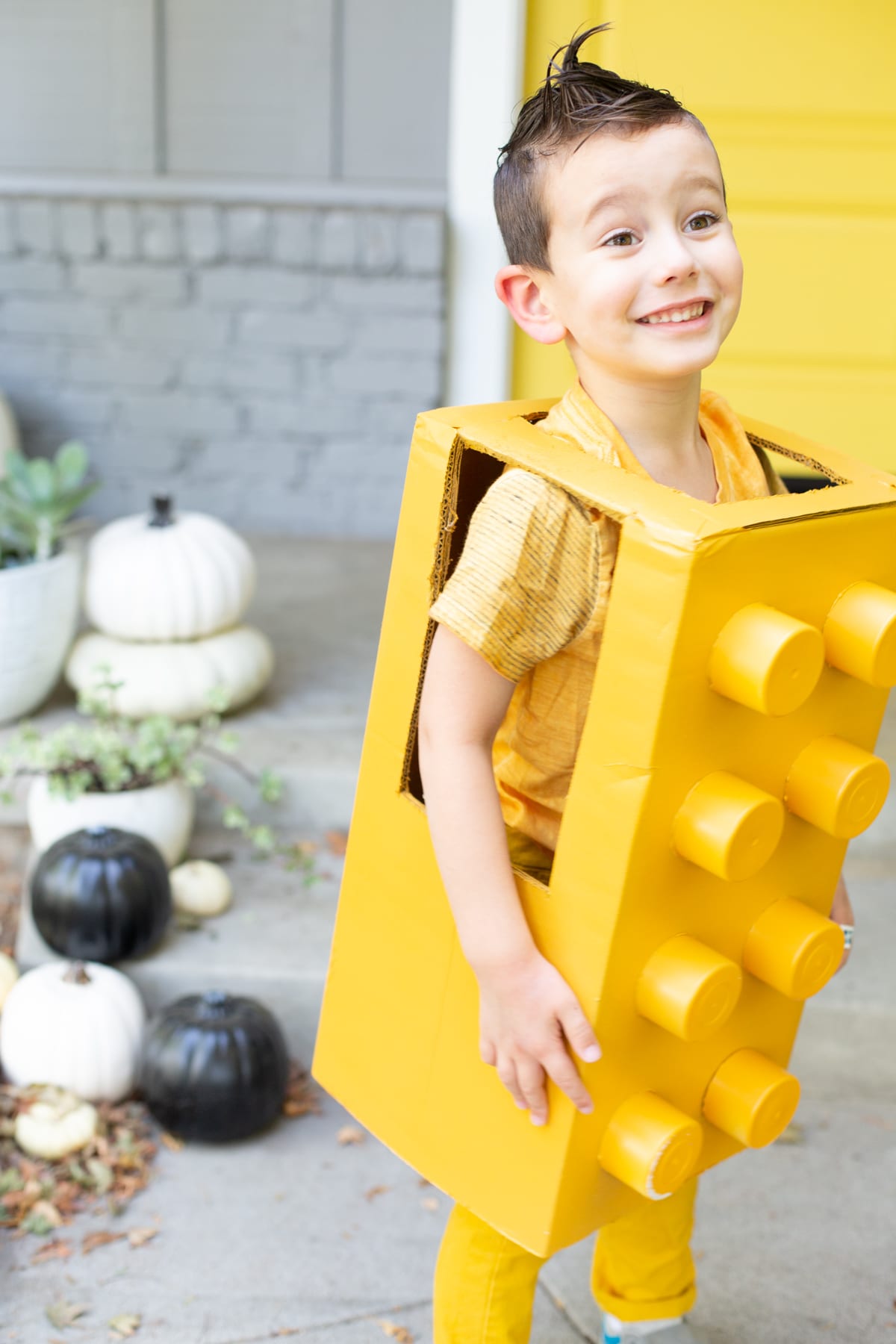 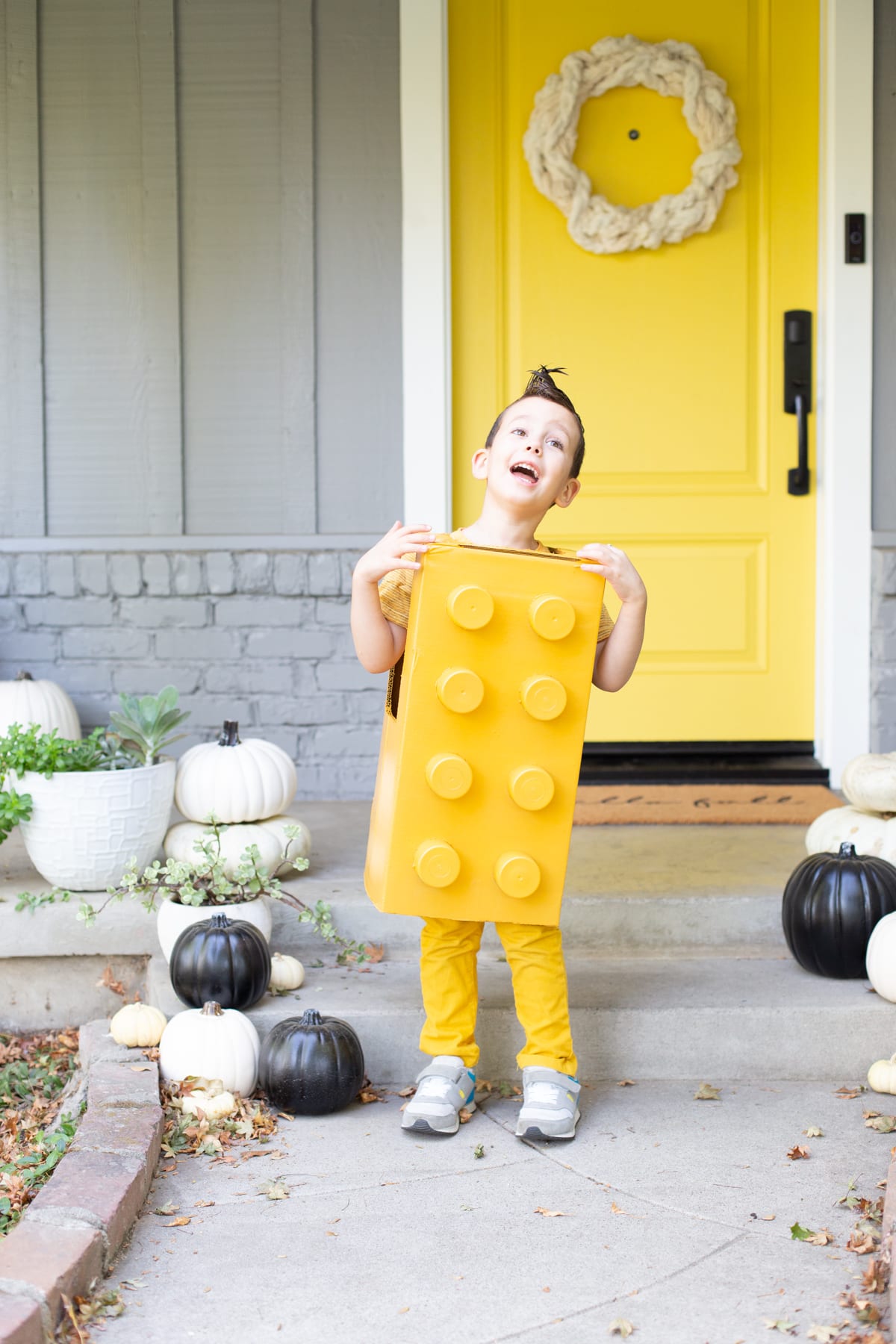 4 thoughts on “How to Make a Lego Halloween Costume”

5 Lessons for a Productive and Positive New Year

5 Lessons for a Productive and Positive New Year!