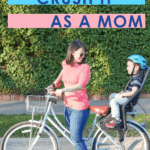 There’s this weird phenomenon among mothers. Have you noticed? Mother or not, I’m sure you know what I’m talking about. It’s the Supermom Syndrome. Somewhere along the way, an unwritten rule became common knowledge and it goes something like this. Moms should be all things to all people at all times. They should be able to accomplish all things every day. They should be chef, maid, playmate, boss, PTA president, and also should always have makeup on.

I know so many women who, if they don’t feel like they’re checking off all of these things, berate and belittle themselves as women and mothers. Even as they’re raising wonderful children and helping to manage their households, often when they also have jobs or their own businesses! But for some reason, those unspoken rules get into our psyches as women and whisper to us that we’re not enough.

Guys. I am not here for it.

You know what I AM here for? The mom who counts it as a win if both of her kids brushed their teeth that morning. The mom who gets to the gym, even if there’s a stain from last night’s dinner on her pants. The mom who buys cookies for school instead of baking them. Any and every mom who’s just trying.

So to help and encourage not just the Supermom, but the Everymom, I put together The Official Low-Key List of Ways to Crush it Today as a Mom. These are not superpowers. They are not huge asks. They’re just small ways that you can make your family feel loved and yourself feel awesome. I hope you love it and I hope you try a few of them. And I hope you let me know if they worked.

P.S. My gut tells me that some of these can just be applied to life in general. So if you’re not a mom, see how they might work for you with some tweaking. Maybe we can take the “as a mom” part out of the title, and just low-key crush it today as women in general. Love you guys. xoxo

Ditch your phone for a while. We recently started this thing where for about 15 minutes a day, we play with the kids doing whatever they want, with zero tech distractions. And I have to embarrassedly admit, it’s kind of life-altering the way that you can fully dive into playing with your kids when you know you’re not going to check your phone. I love it because there’s no pressure to keep checking emails or texts, and the kids love it because they know I’m fully there with them.

Follow your kids’ lead at playtime. There’s a brief mention of this above, but another key change that we’ve made lately is letting the kids choose what to do when we hang out. They’re along for the ride with us a lot, running errands or helping around the house. And the older they get, the less unstructured play time they have. But when we sit down to play with them and let them choose what we’re doing, they’re over the moon. Even if it’s just for 15 minutes. So let them pick and fully dive in, even if it’s your 100th game of Candy Land this month. This works for older kids too! Maybe they want to spend time together by just sitting and reading, or taking a walk, or whatever. Set one parameter: no screens. And let the kid do the choosing.

Go to the library. I feel like I’m always shouting from the rooftops about taking your kids to the library. But truly, as a mom-win, it’s way up there. I mean, it’s free, it’s literacy-based, and most libraries have more than just books in the kids’ section (think puzzles, toys, play areas, and more). Like, total no-brainer. If you haven’t explored your local library, try it. Definitely a way to crush it today.

Let your kid be in charge. This sounds crazy, but stick with me. Pick one thing today that you think your child is probably capable of, but you’ve never let him try. And now…. let him be in charge of it. He might fail and he might make a mess, but more likely, he’ll succeed and be super proud. And it’ll be one less thing that you have to do for him. (And if he fails, teach him how to do it and let him try again.)

Start a dinner tradition. This one works for tiny kids, teens, and even adults. When you gather for dinner in the evening, start a tradition of asking each other a question every day. Ours is usually: What were the best and worst parts of your day today? We started asking the kids this when they could barely talk, and now it’s pretty much a daily conversation. Yours doesn’t have to be the same question (it could be if you wanted!), but a question like that does so many things for a family. It encourages conversation, it helps kids start to explore their own feelings about current events, and it starts giving them ownership over their lives. Try it and see what happens. And you have to answer too!

Get their help. If you’re drowning in housework, let them help. There’s something that any kid can do, even if it’s just moving laundry from one room to another. One way that we’ve found to help include them in housework is giving them an either-or question. “Would you like to tidy your room, or fold the towels?” Give them two options, both of which are well within their capabilities, and the key is that you have to trulynot care which they pick. When they complete the one they chose, that’s it. They held up their end of the deal. Give them a high five and a thank you.