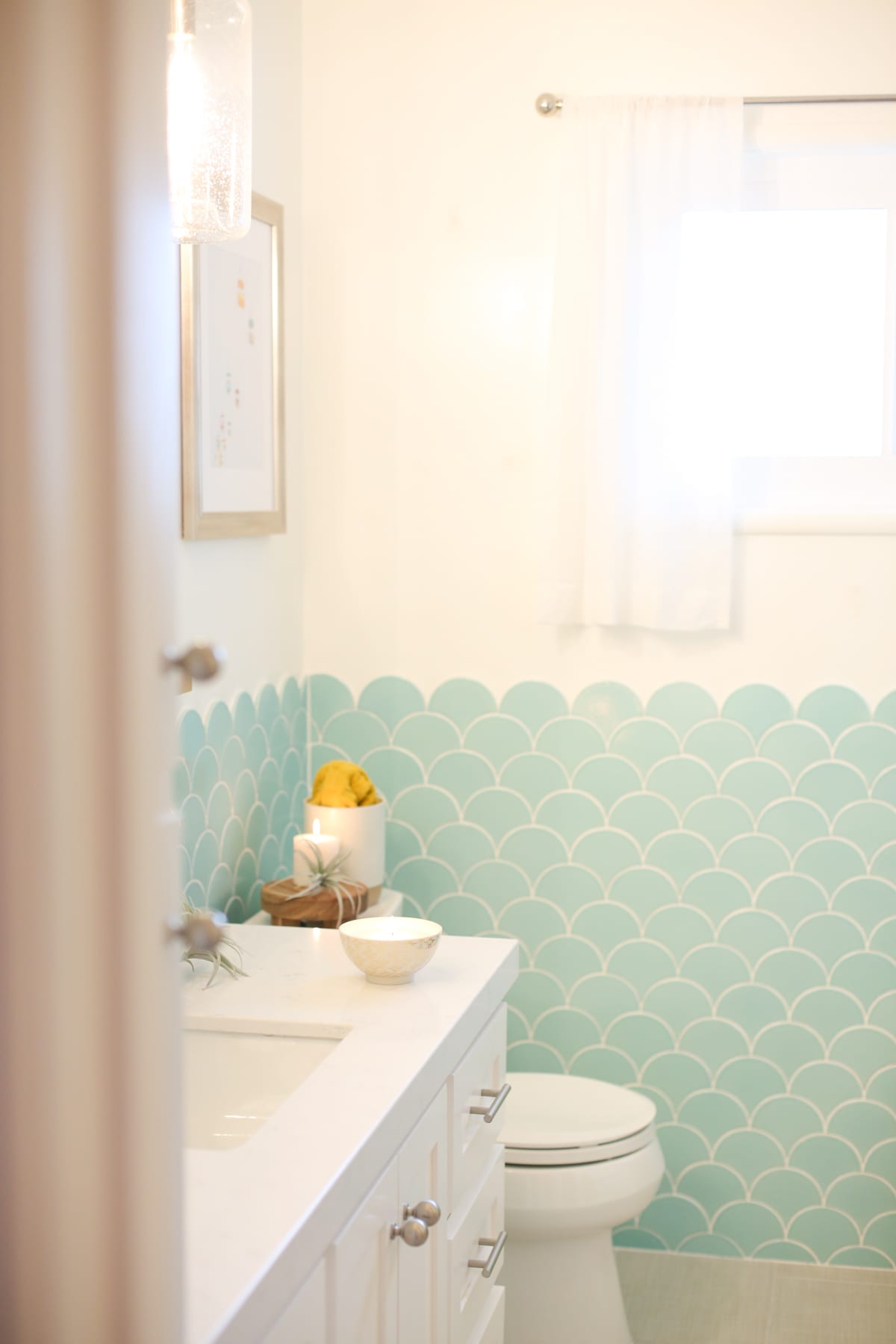 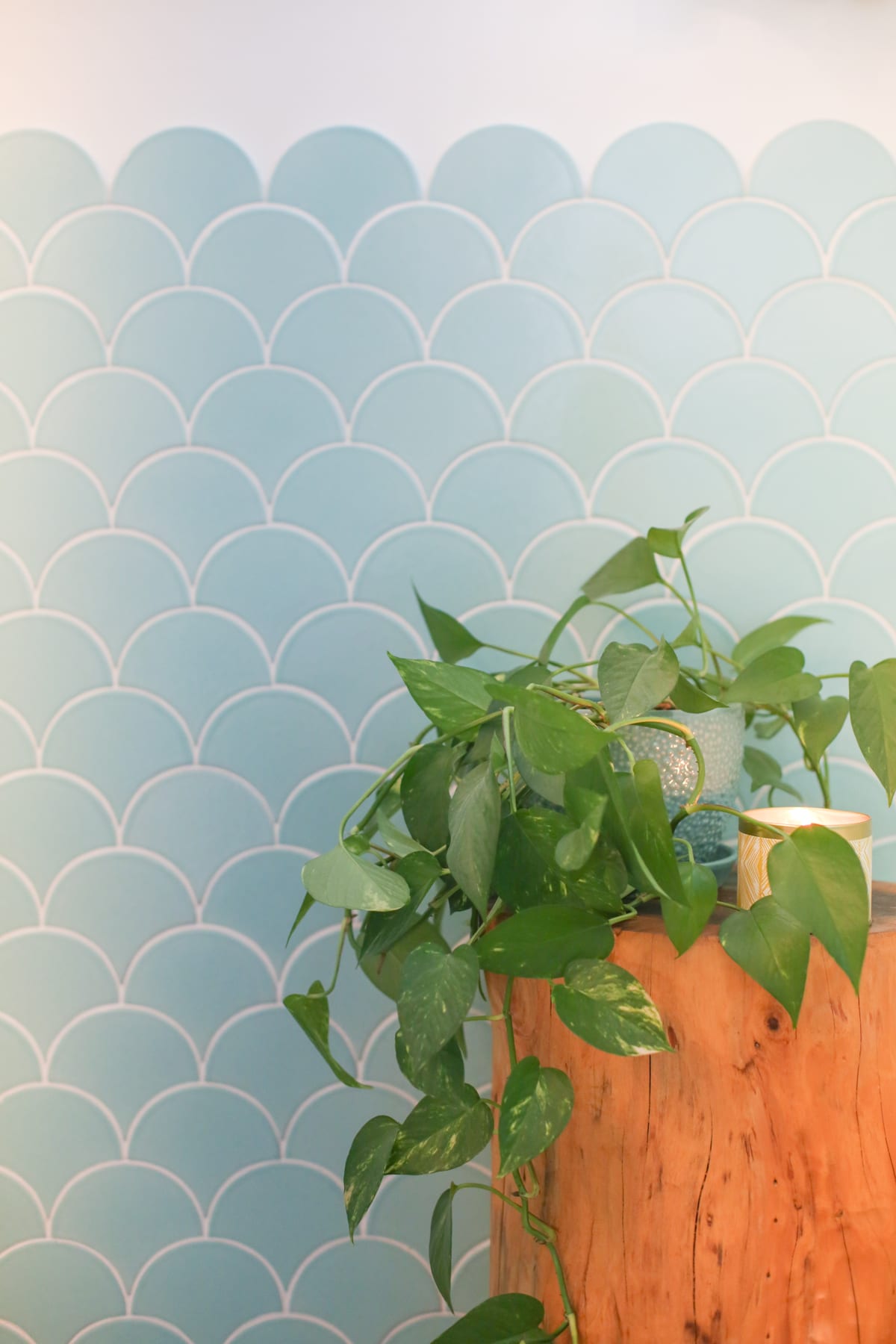 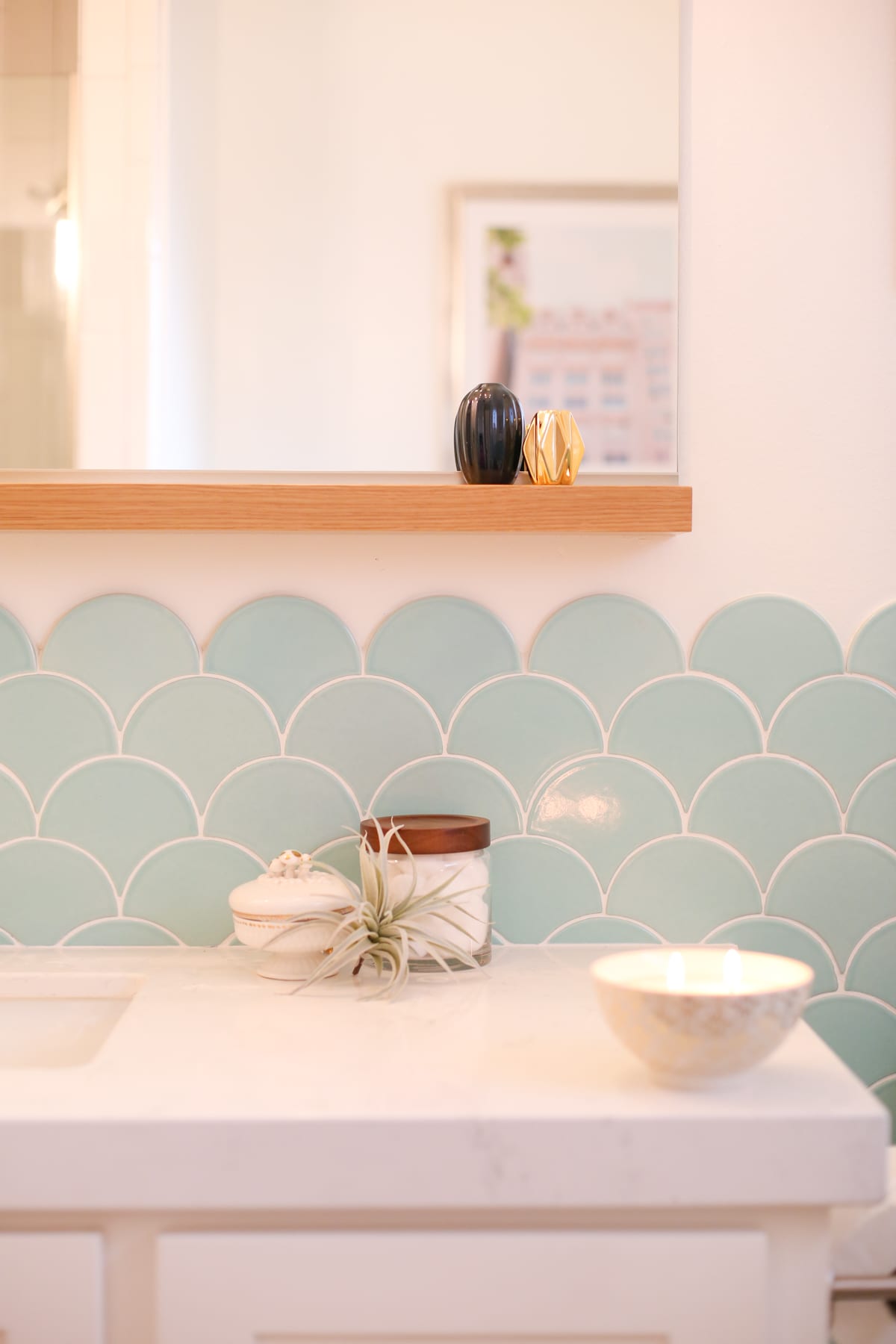 Annnnnnd six months later, we’re finally ready to start sharing finished rooms in our final remodel! Seeing as how we were under construction for the duration of my pregnancy with Maggie last year, and then again for six months this year, I think it’s safe to say we’ve had our fill of renovations for the time being. And the rooms are starting to come together one by one, and it’s so exciting. First up, the room reveal of our kids’ and guest bathroom!

This room was one that I’ve been aching to fix up. It had this old mint tile around the tub and on the counter, and while I’m all about color, the tile was just busted. It was original to the house (about 70 years old), and it was cracked, worn, and just plain done. The room itself was set up pretty nicely for a guest and kid bathroom, but we did make a few changes structurally. Here are a couple before shots for reference: 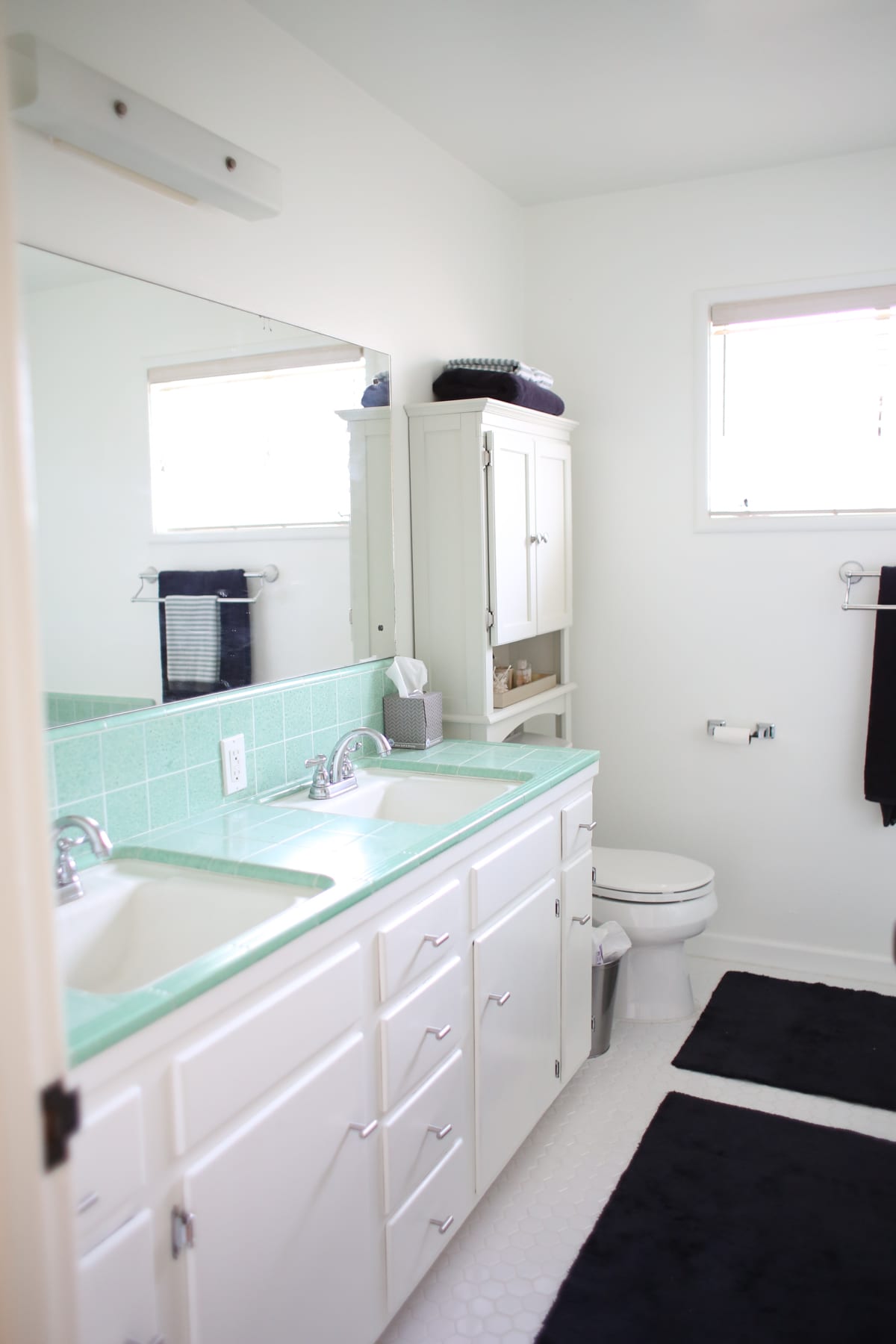 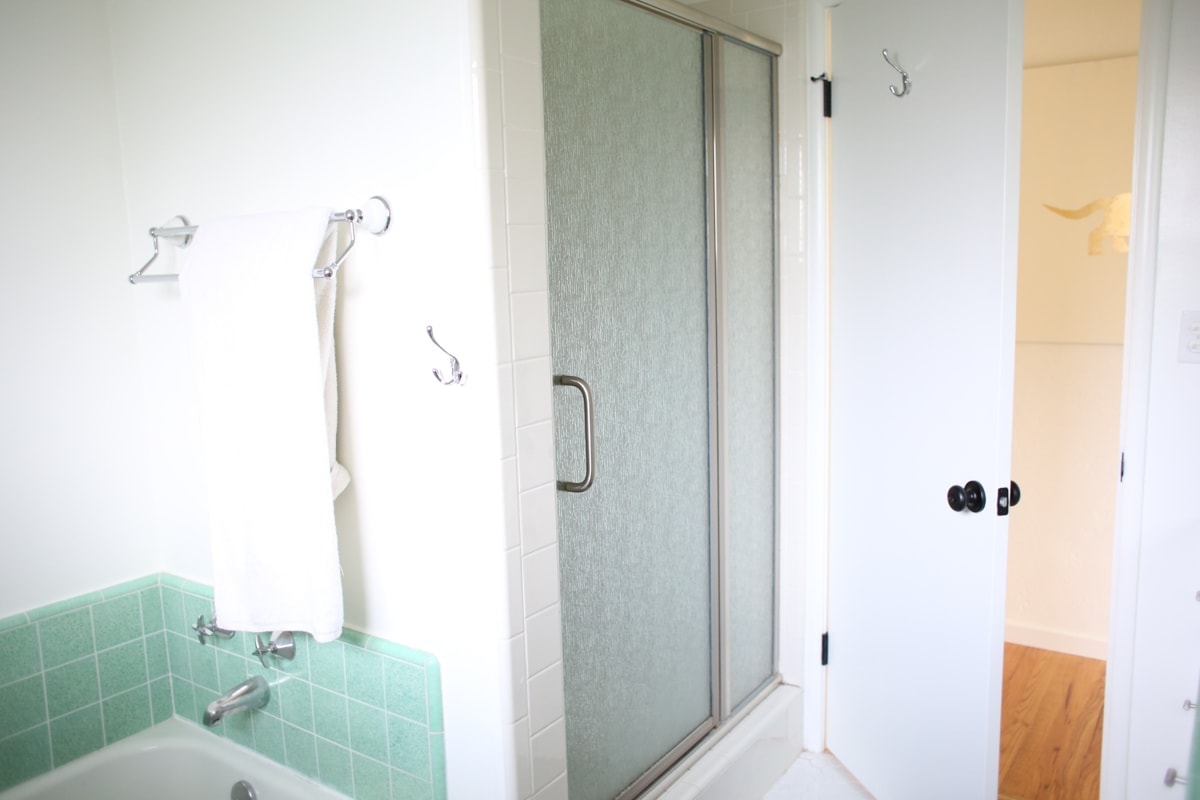 Initially the room had dual sinks, and while the kids would have probably appreciated that in their teen years, I’m thinking they can just learn to share. 😉 Instead of replacing both sinks, we opted for a floor-to-ceiling built-in cabinet that provides a ton of storage space. The other fun feature of these cabinets is that the low center drawer under the sink is actually a hidden step stool, so the kids can step up to wash their hands and brush their teeth. When they’re too tall for it, it can convert to a usable drawer. 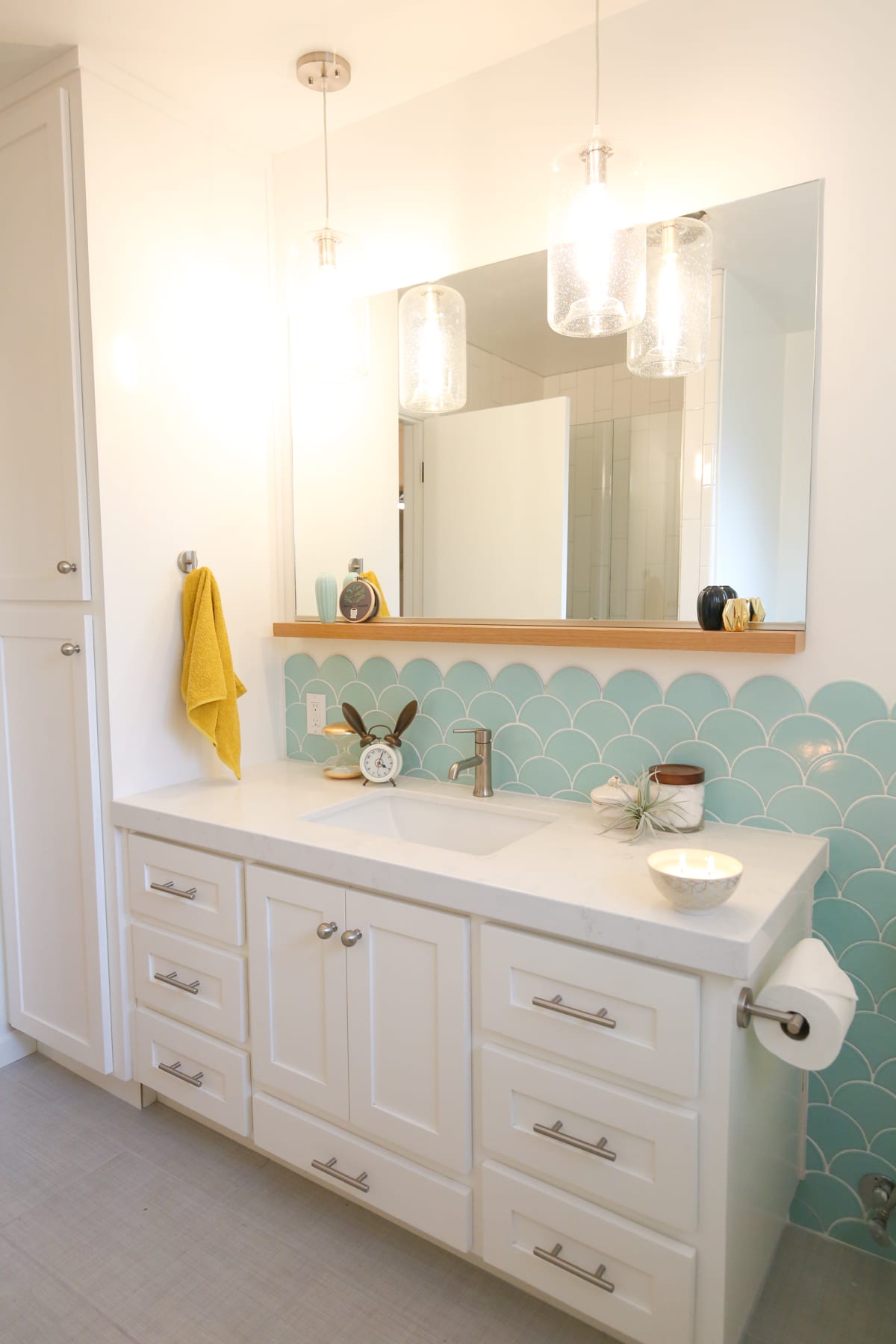 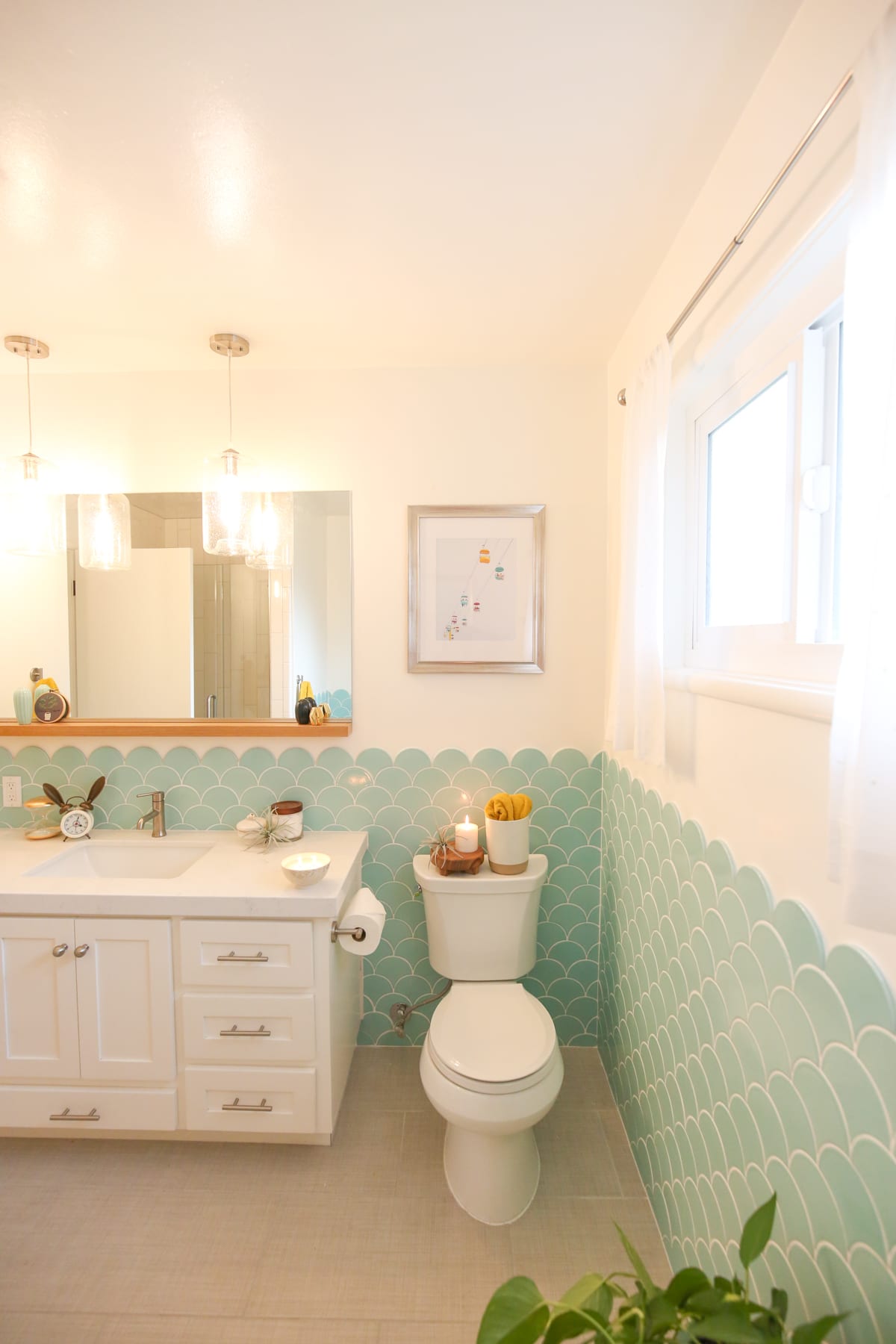 But let’s get to the really exciting part of this whole shebang, and that’s the tile wainscoting! In my online research for tile prior to the project, I stumbled across Fireclay Tile and fell immediately head over heels in love.

I shared a bit about them here, and pretty much I can’t say enough about the Fireclay product and their team. They have an array of tile shapes and a whole rainbow of colors, and you can mix and match just about any of them. It makes for a new level of possibilities when it comes to using tile as decor in a space.

We knew we wanted to have something a bit playful, but still airy and beautiful, and that’s how we hit on this patter and color combo: Ogee Drop tile in Glacier Bay. The blue shade was kind of perfect because it was a nod to the old tile, but updated to feel more like us. And the tile pattern reminds me of a mermaid, so that’s a total bonus.

We decided to use it as wainscoting around the room to create a little visual interest, and to keep the scalloped top edge instead of finishing it with a bullnose or something similar. I love it. It’s so unique and every person who has seen the room has something new to say about it! 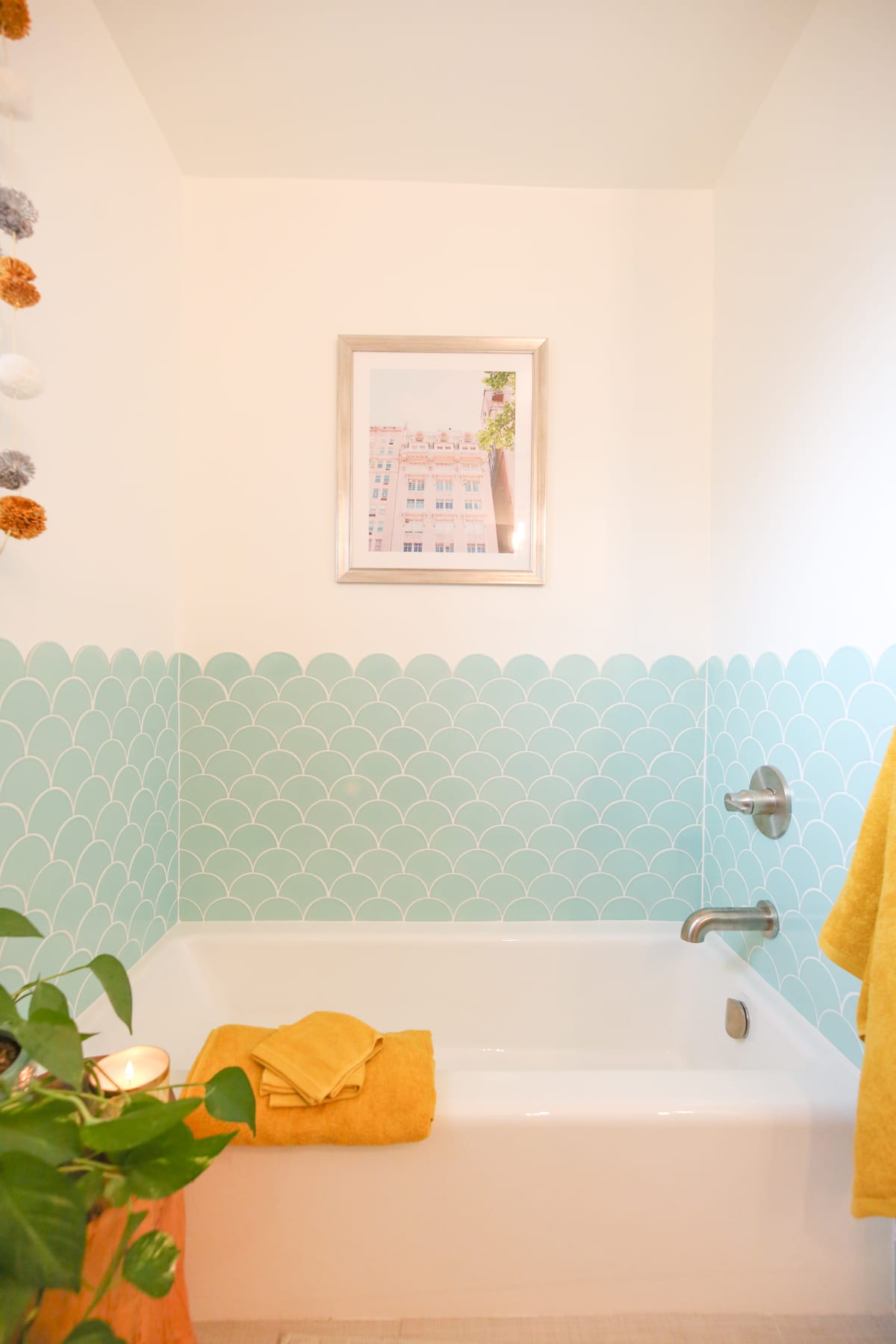 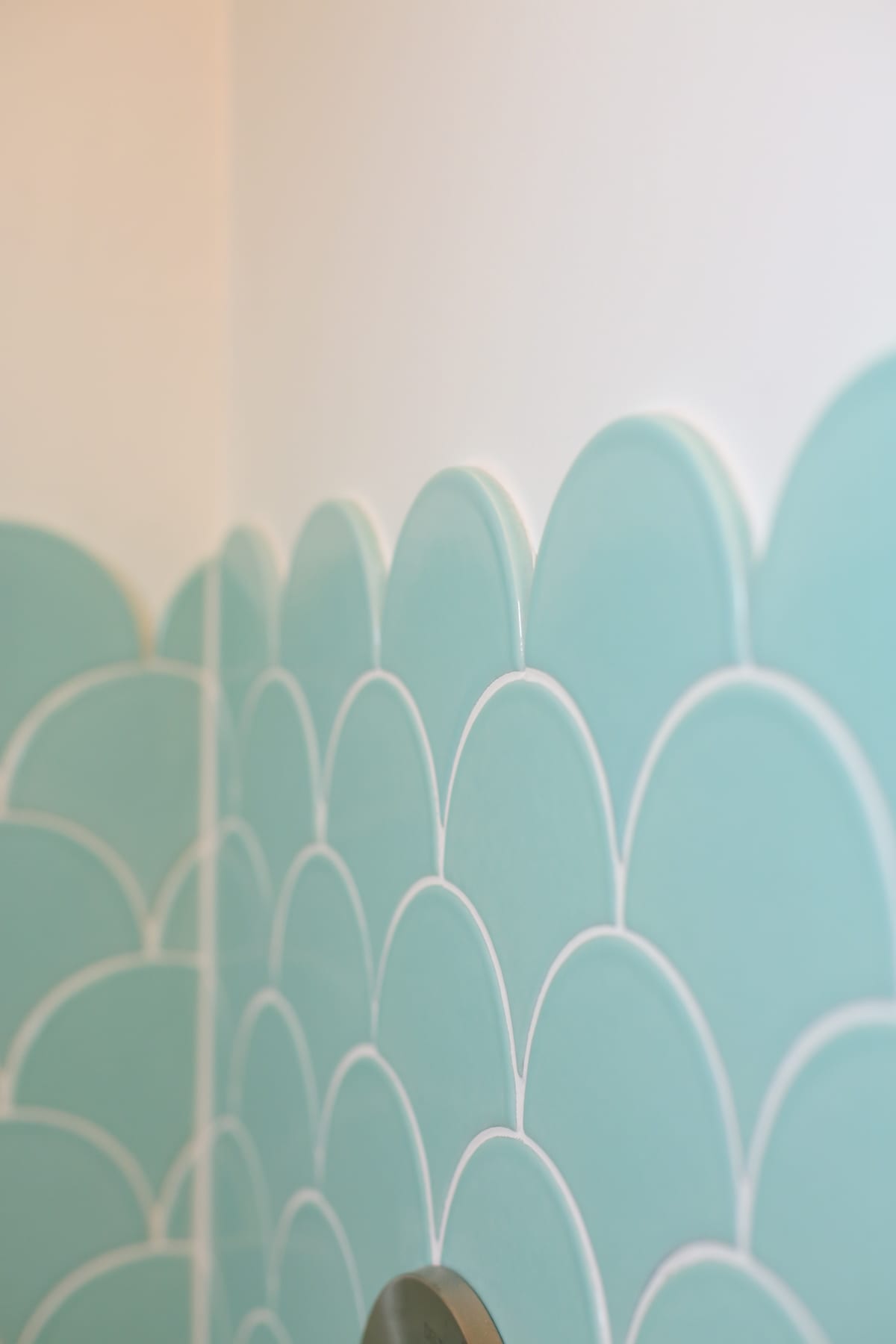 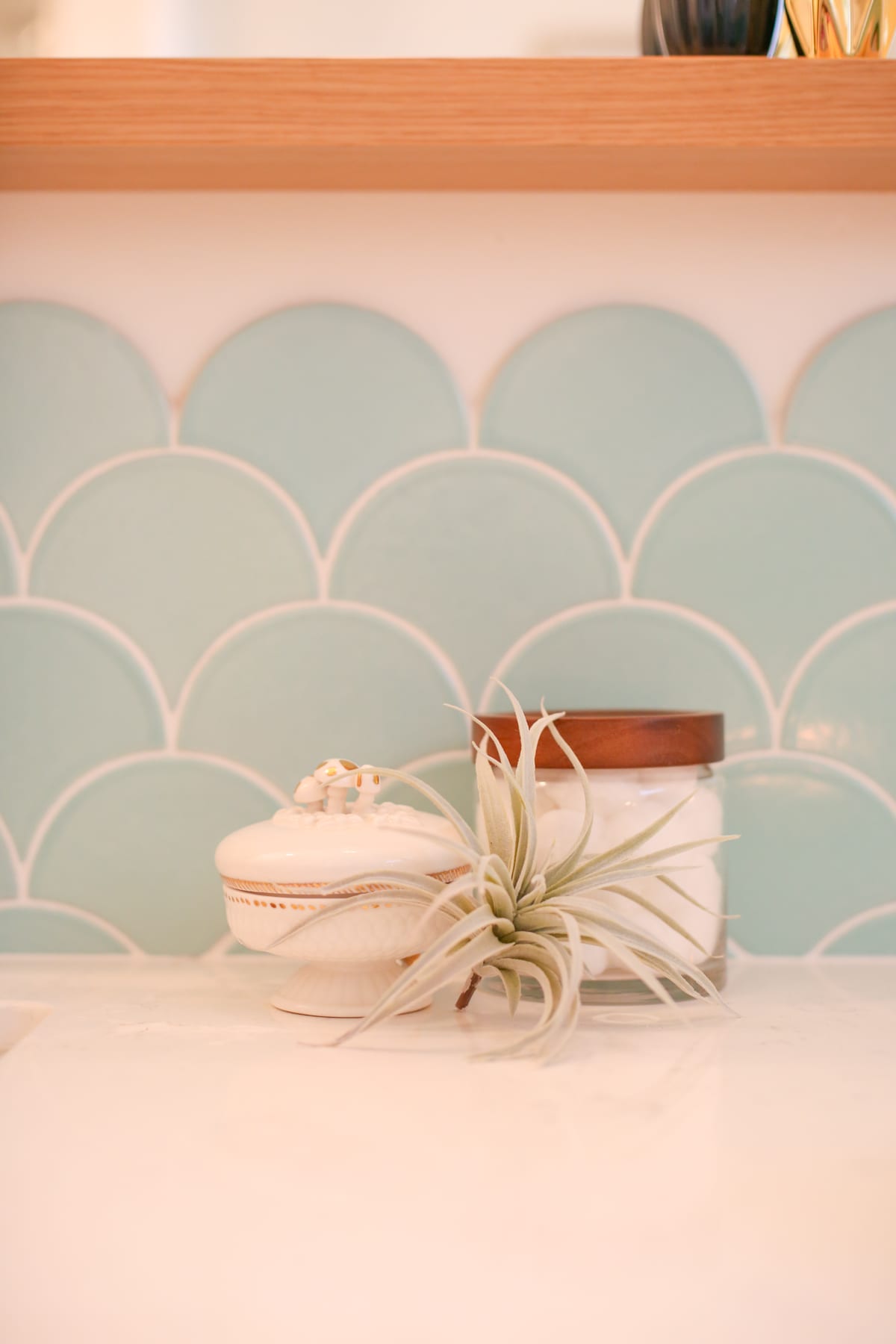 Since the wall tile was such a statement, we decided to keep the rest of the room pretty chill. We opted for brushed nickel fixtures to keep a kind of icy, fresh feeling. The floor tile is a gray that is similar to our kitchen, which is a nice tie-in for the house. And in the shower we chose a tall white subway, laid vertically. We did a light grey grout everywhere but the walls, so the kids’ dirty feet wouldn’t make it look too yucky. 😉

I also wanted to add a few natural-feeling elements, so we did a white oak ledge under the mirror and added our big stump to the room as a little bench. I think I’ll probably eventually hang a few more plants and possibly some floating shelves. Right now I just want to live in the space for a bit to get a feel for it. 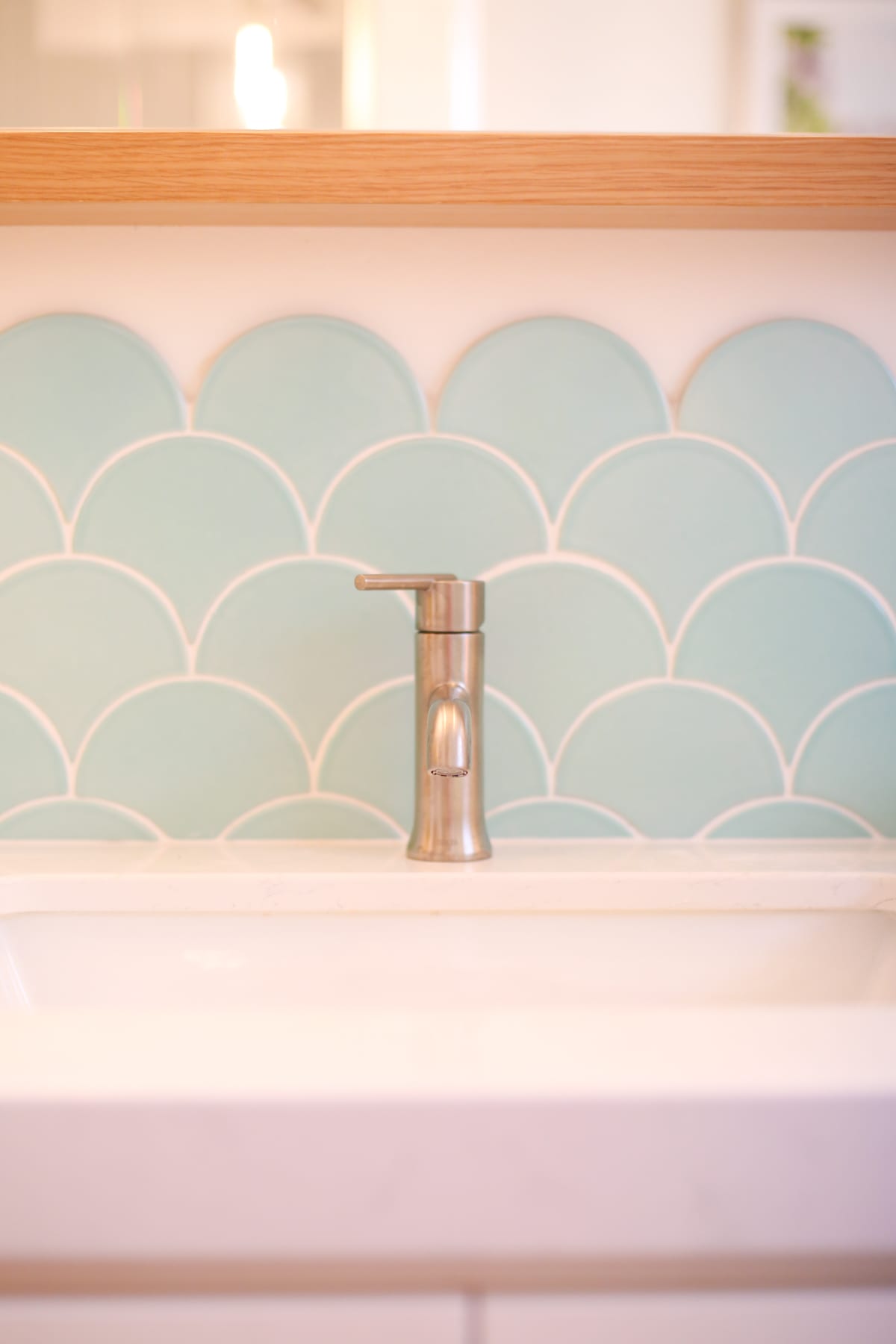 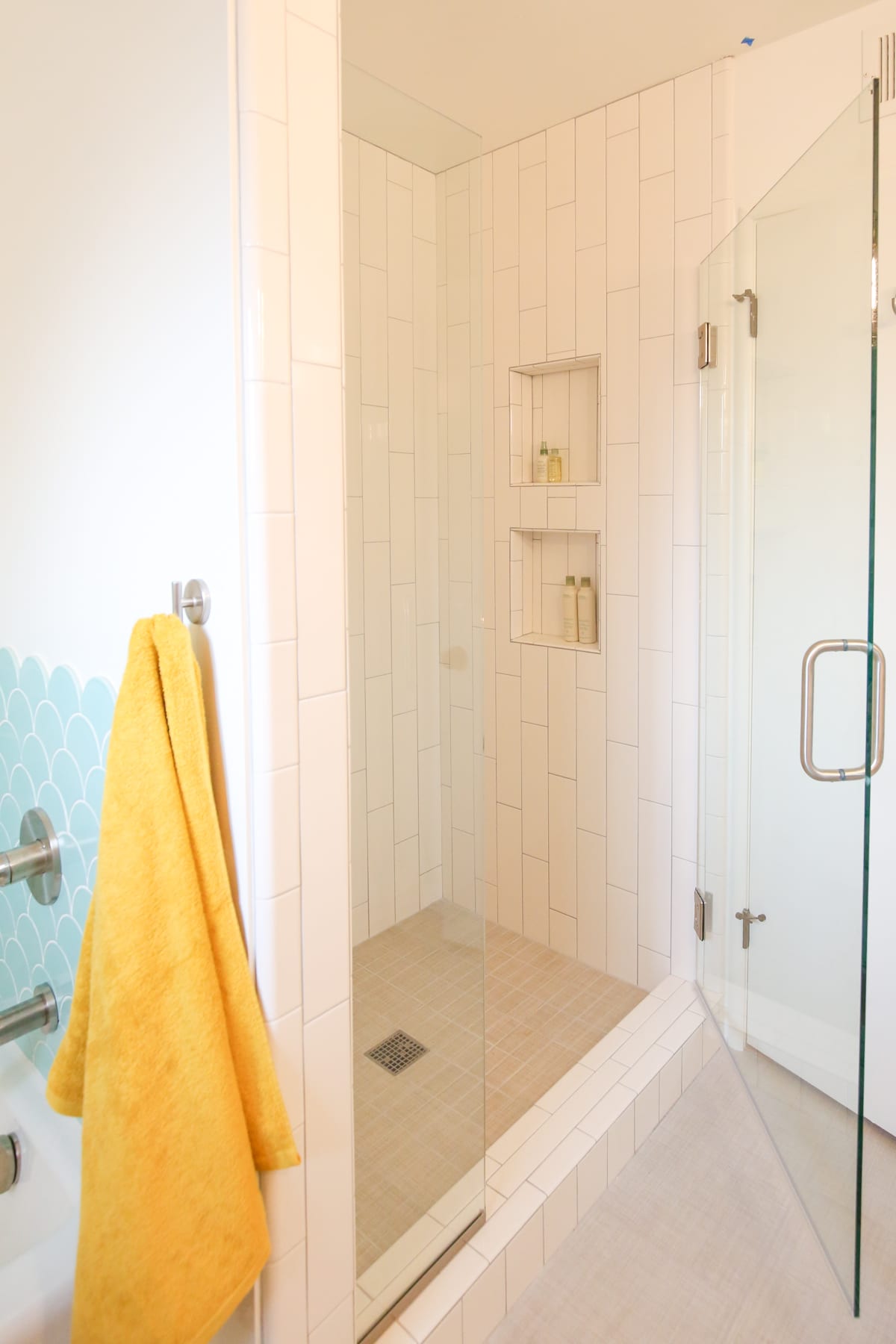 So that’s it! I’m so excited to finally be sharing our new rooms, and you’re gonna FLIP when you see what’s next. So stay tuned! xoxo

P.S. Here’s another fun home project that you might love: painting a brick fireplace!

Tile for this post graciously provided by Fireclay Tile. All ideas and opinions are my own. 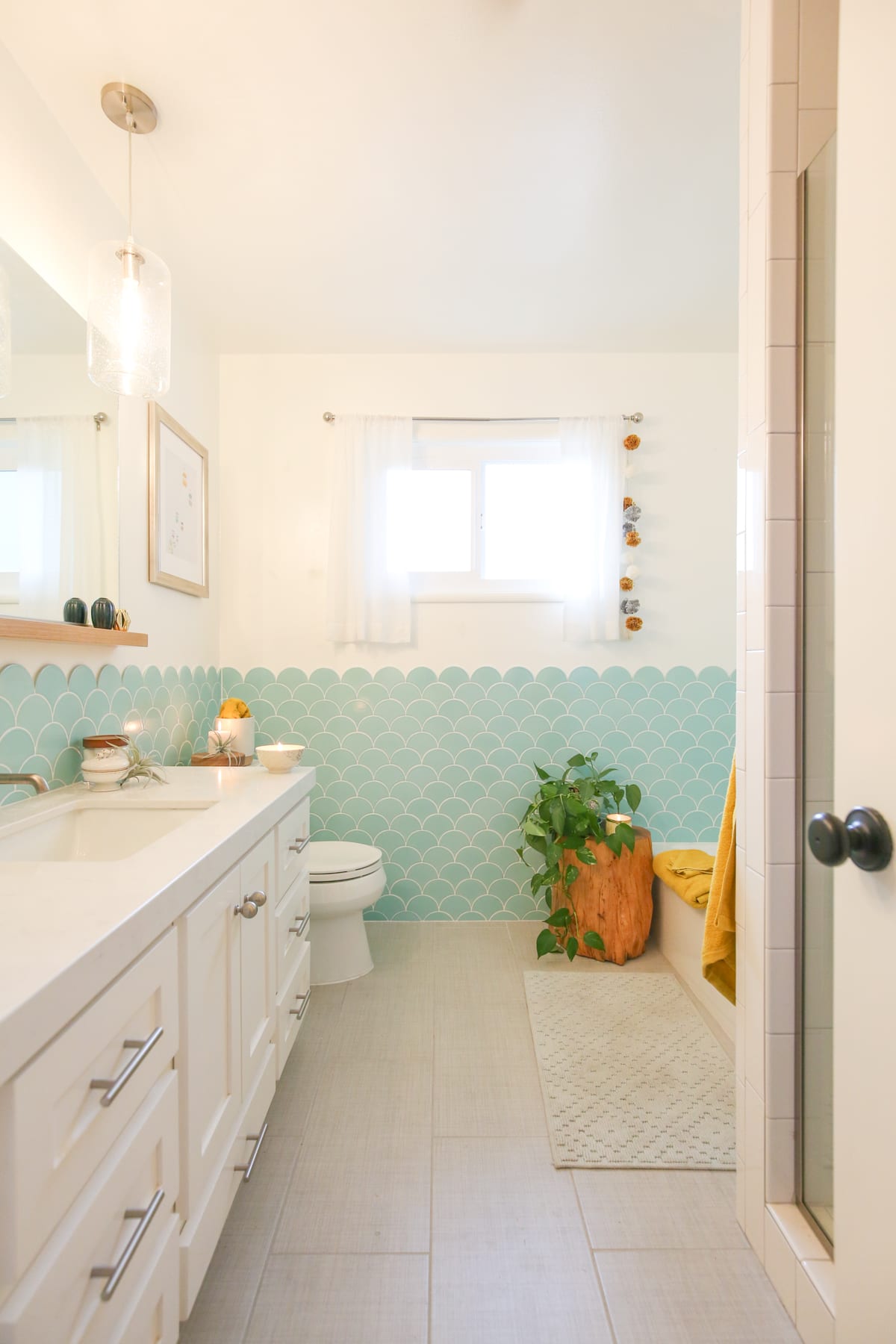 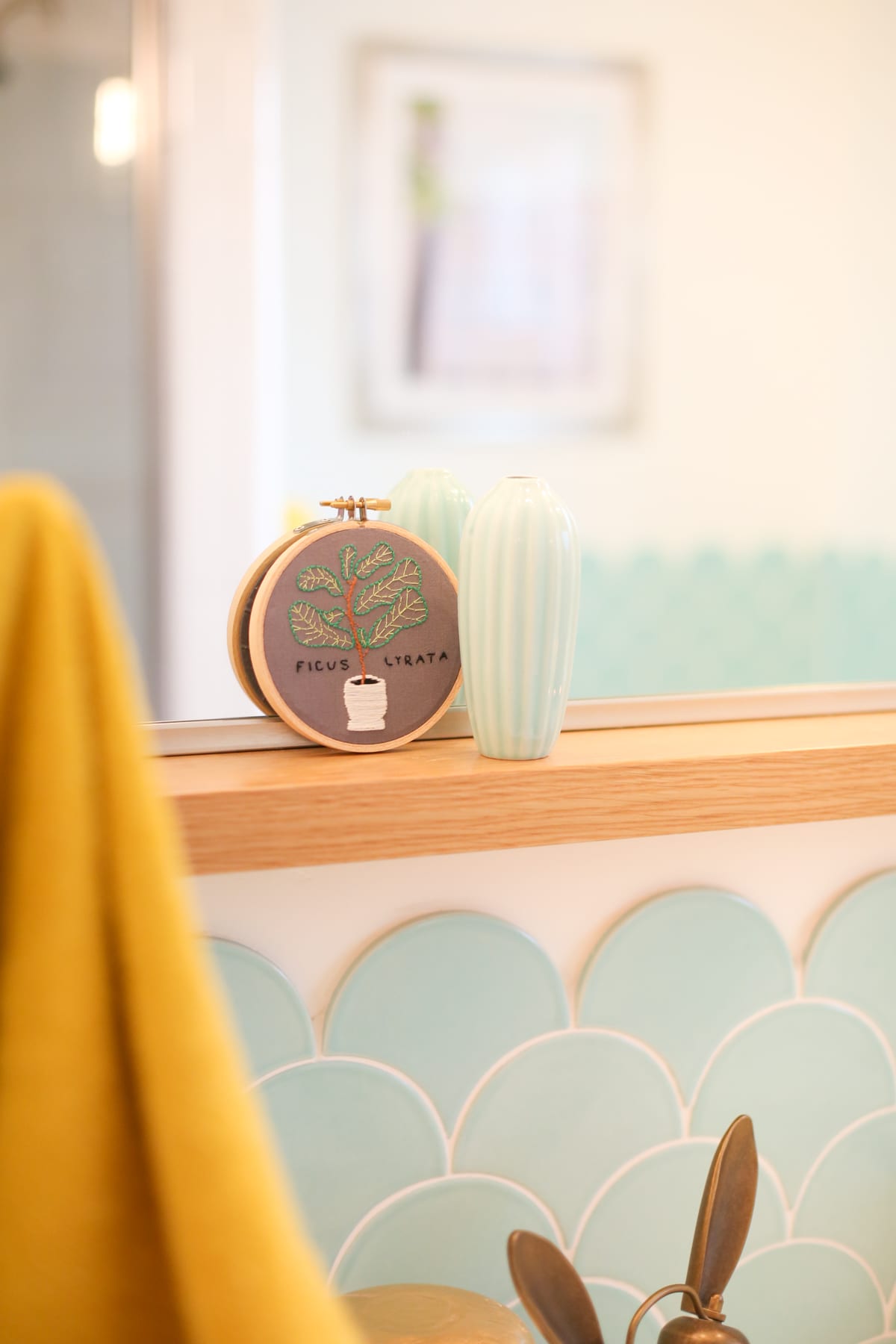 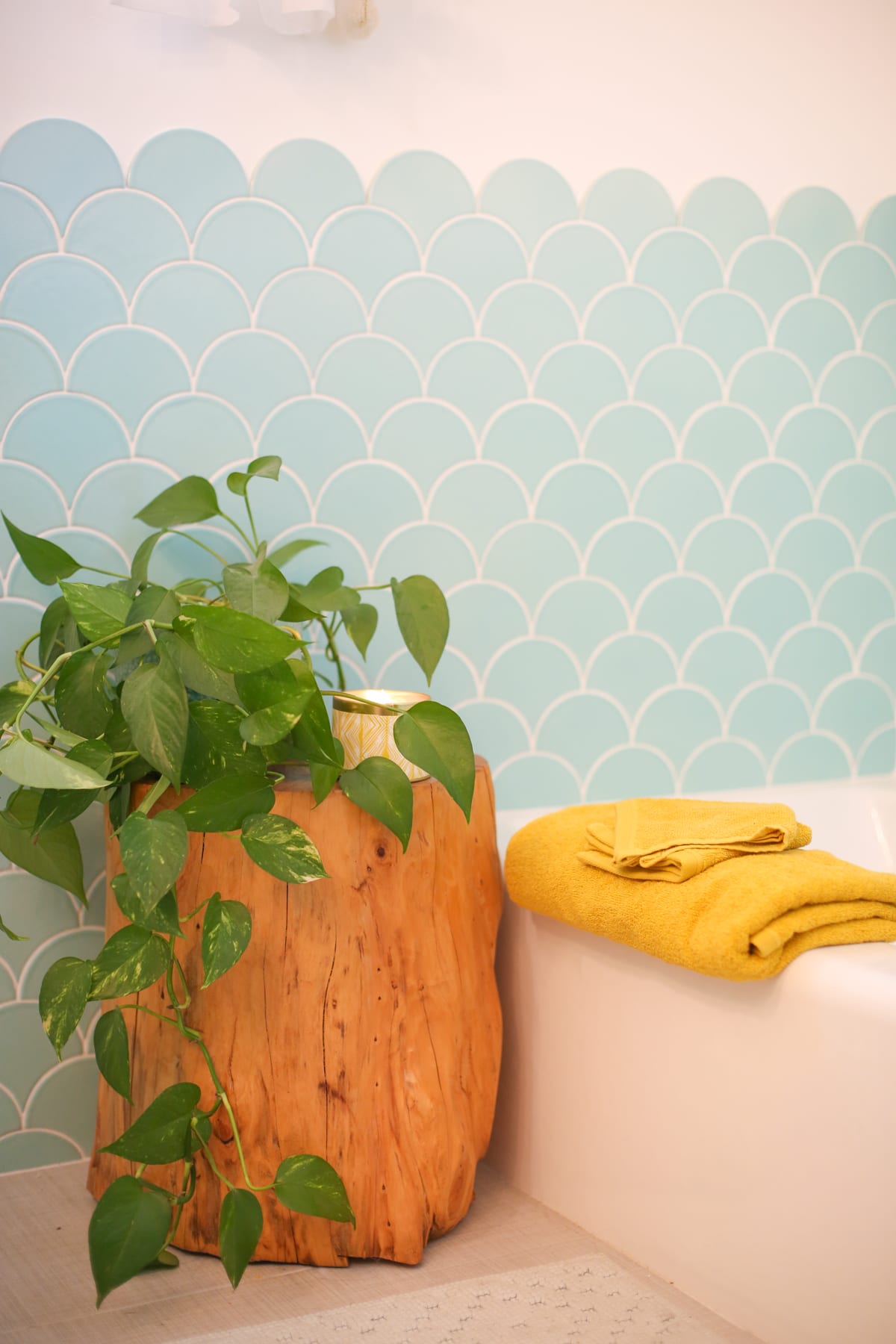