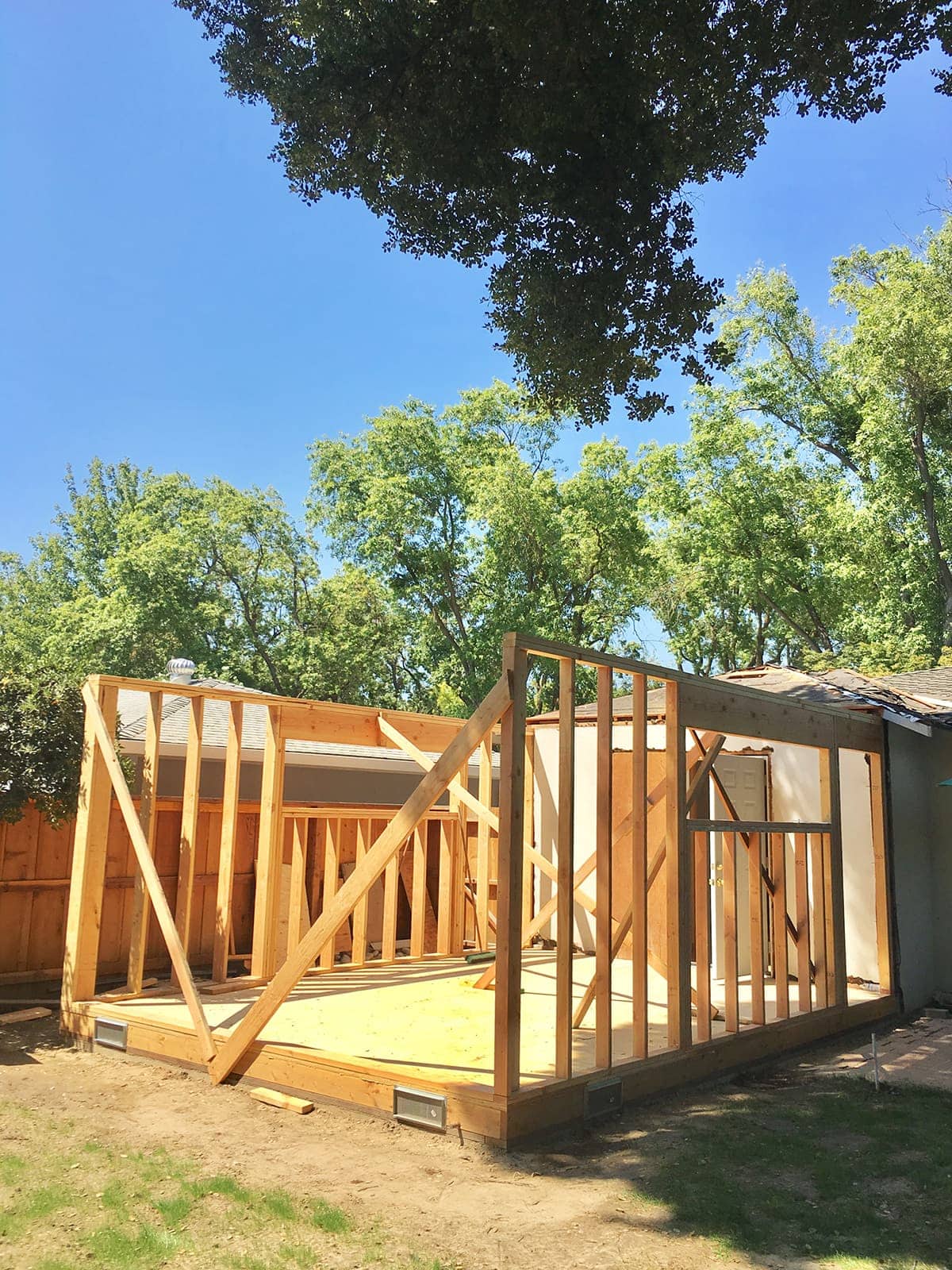 We’re in the thick of it, y’all! The renovation is in full swing. Here’s a little update on what we’ve got cooking.

We moved out of our bedroom and into the studio about a month ago. We put lots of our stuff in storage and kept just the necessities. (Side note: having access to only about a suitcase worth of clothes for an entire summer and into the fall is pretty tricky.) Shortly thereafter, Ryan did some demo on our old bedroom, taking out moldings, closet doors, and that kind of stuff. Then we had a new foundation poured for what will be the new bedroom and we were under way.

As of now we’ve got a couple of walls framed on the new room, and the floor laid. Other than that, our plumber is working like crazy to get all of the plumbing set up for the new master bath. We also had old pipes running under our house (built in the 1950’s) so he’s replacing all of that old plumbing while he’s at it. It’s a lot of plumbing work. So on the outside it doesn’t look like much is happening but under the house there’s a ton of action. Today we had some new windows installed, and pretty soon more framing will happen.

In the bedroom, the plan is basically that the old room will get split in half, with one portion being the master bath and one portion being a walk-in closet. Then the new structure will be the new master bedroom. We’re planning vaulted ceilings to give it a spacious feeling, with one entire wall dedicated to built-in bookshelves surrounding a bay window and a windowseat. And a fireplace! I could die. I’m never leaving my bedroom. Ever. 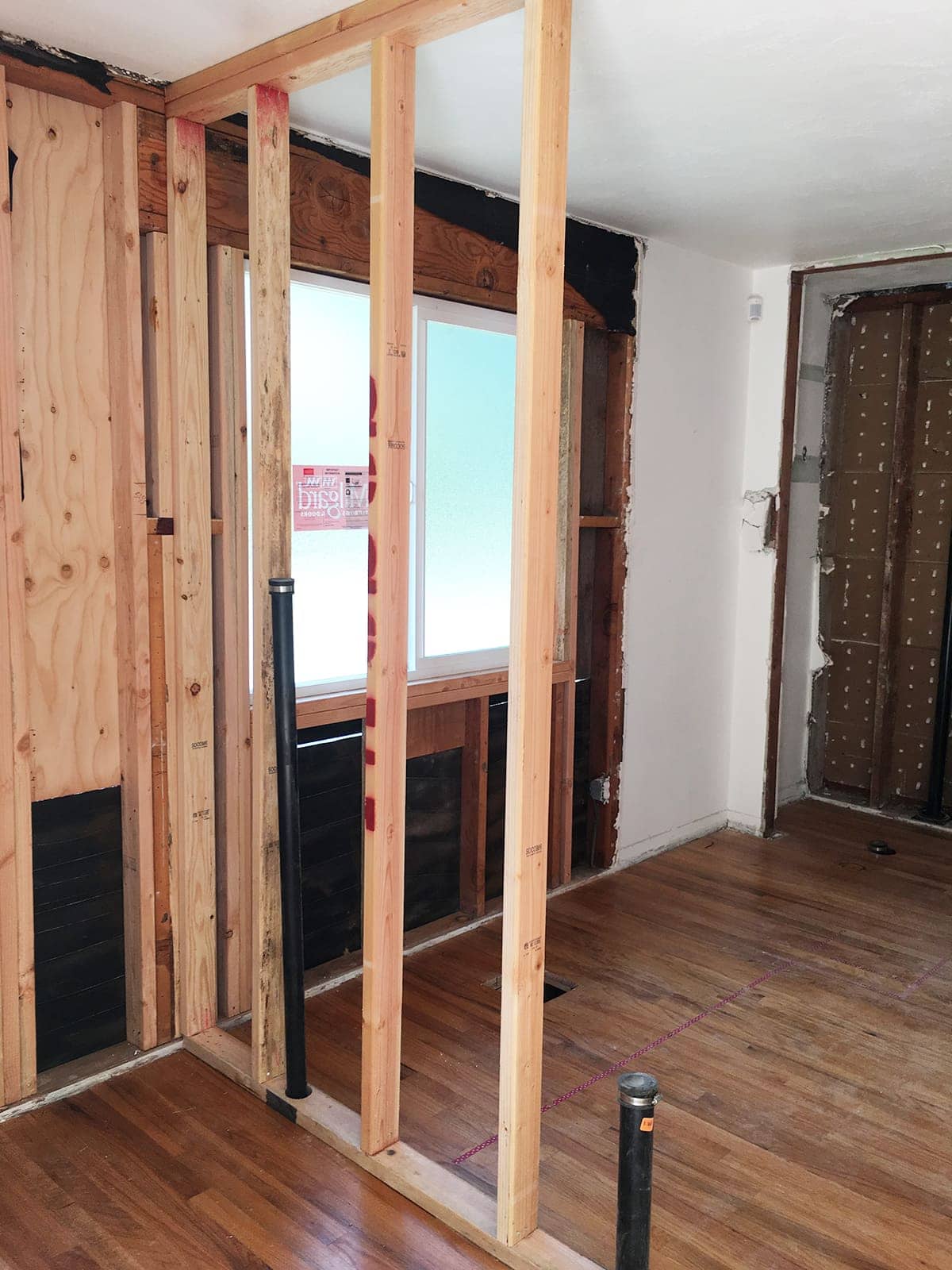 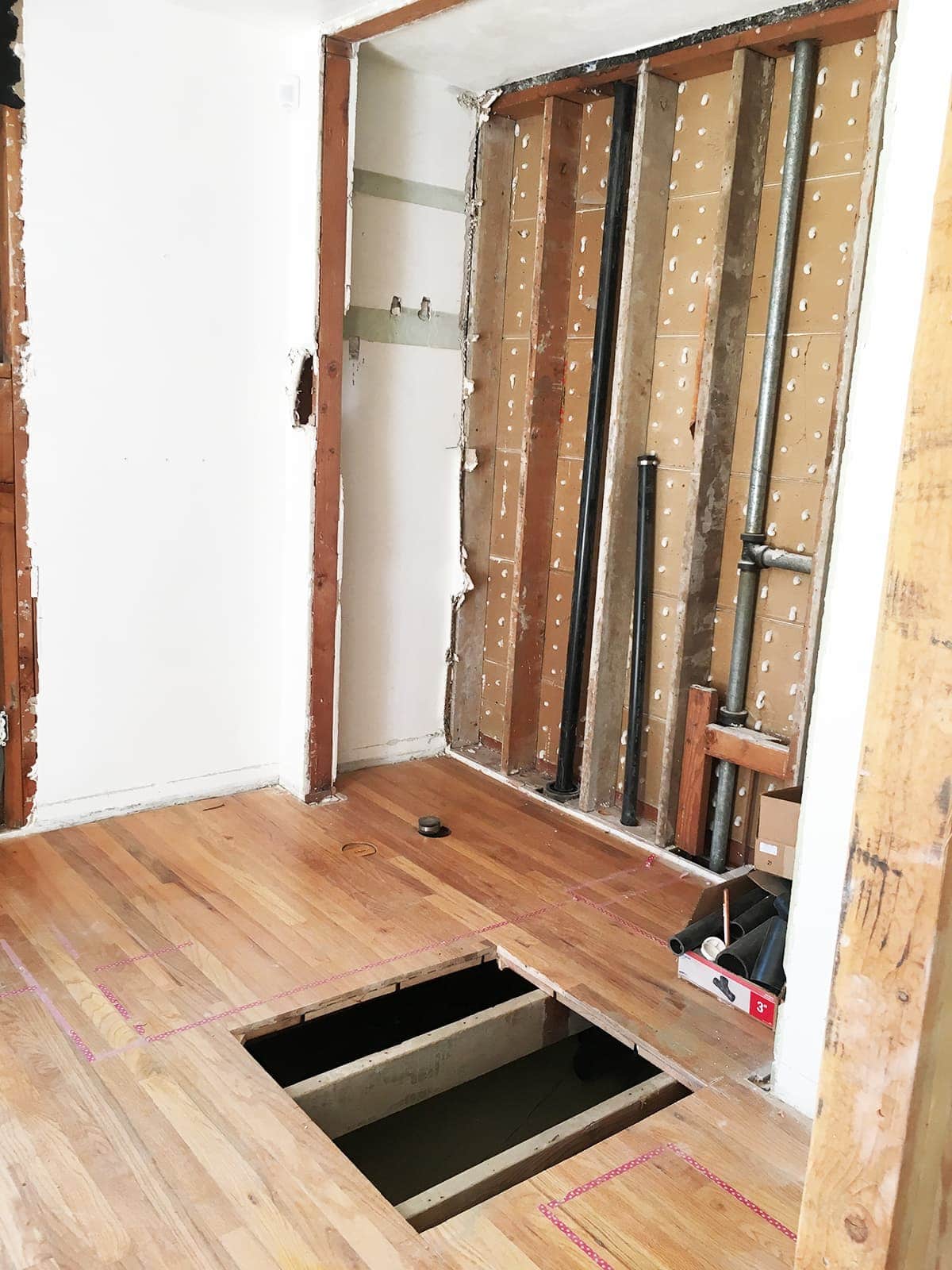 But the plan there is to have dual sinks at a vanity, a freestanding soaking tub, an all-glass shower, and some cabinetry for storage. Right now we’re debating on the vanity whether to use a piece of furniture (like a vintage credenza or something similar) or to have them built. I just want to be sure it all feels cohesive, and when you see what we’re doing with Fireclay tile on the floor you’ll know what I mean! We’ve got something really cool planned and it’ll take some thinking to make it all fit together.

Then! We’re updating the guest/kids’ bathroom as well, which currently looks like this: 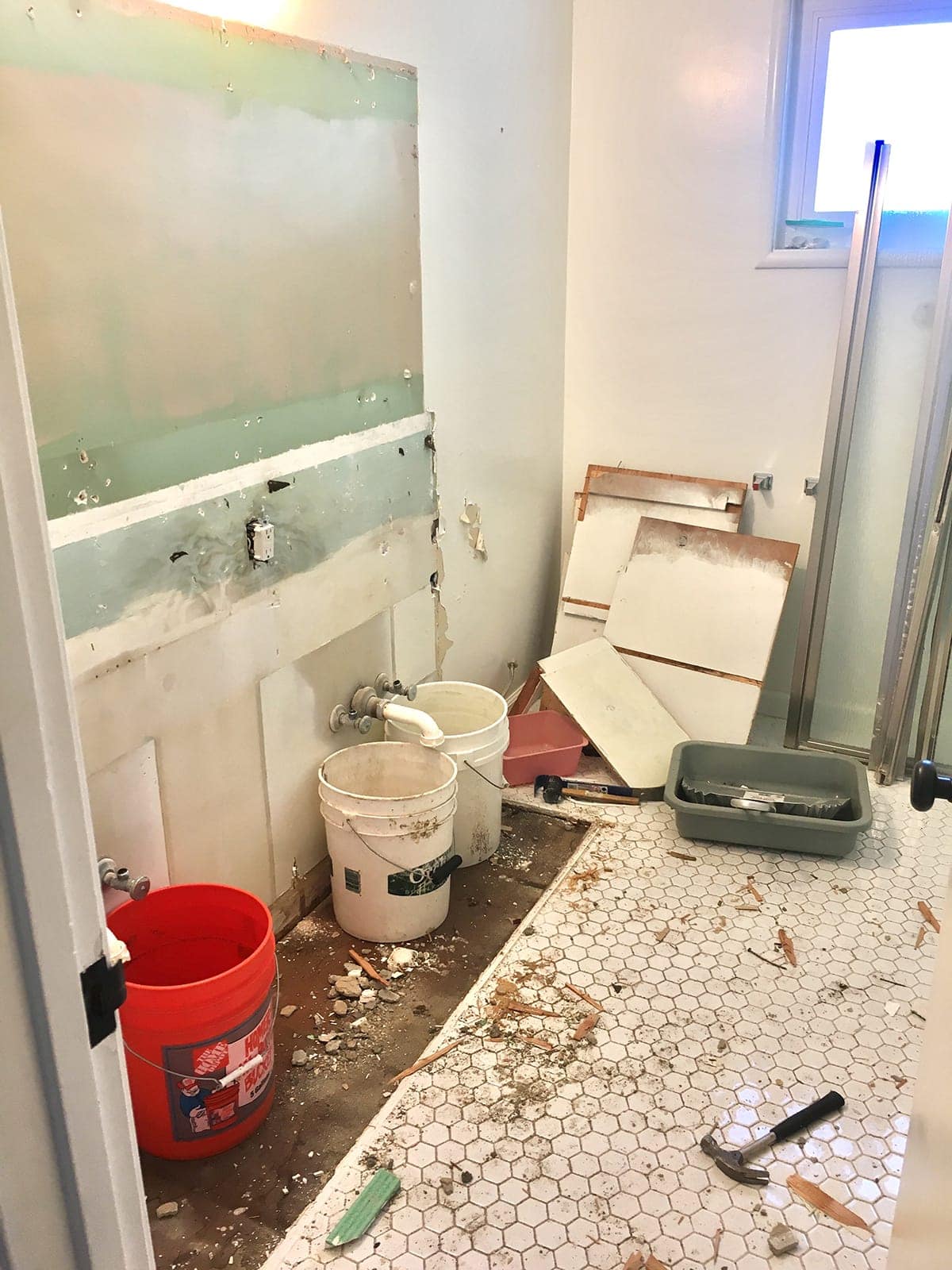 Ryan seriously loves doing demolition — he took this apart pretty much on his own. We’ll miss that old mint green tile but it just wasn’t in good shape. In fact, the sinks and tub in this bathroom are original to the house and all have lines worn away from where the water has been running in them for the last 70 years. So the plan in this bathroom is to pretty much keep the layout and just redo all the finishings. The only layout change is that we’re going from two sinks down to one and adding some cabinetry in place of the old sink. Can’t WAIT to show you the tile we chose here too!

So that’s where we are, gang! We’ll check in after another few weeks to show you where we are. Hoping it won’t be too much longer than that. Let me know if you have any questions! xoxo 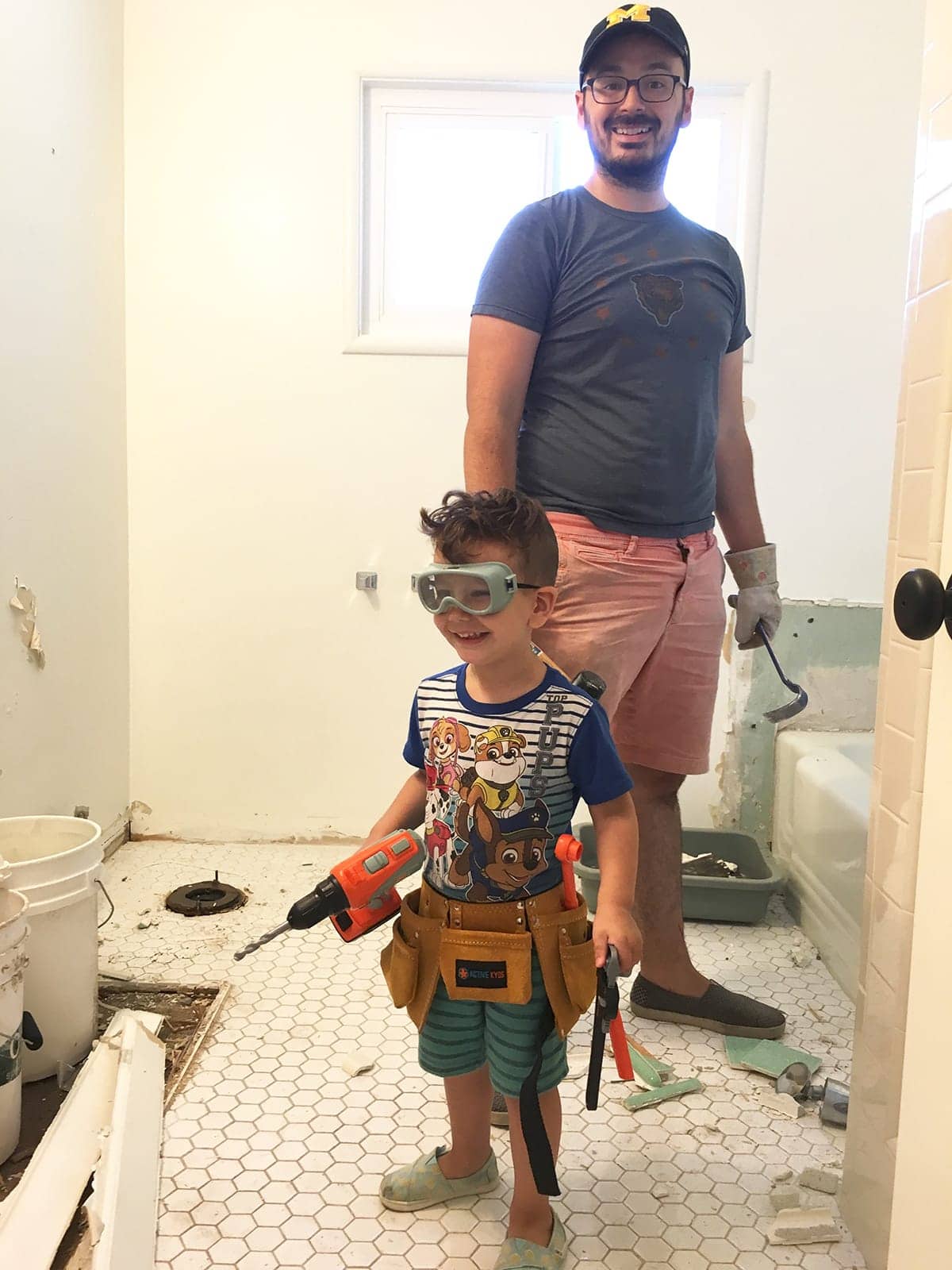