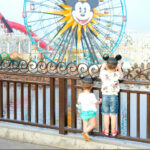 Ever wonder how to go to Disneyland on a budget? Here are eight solid tips and hacks to visit Disneyland without breaking the bank!

Last year, having Disneyland Magic Key annual passes with our kiddos was the greatest ever! I’ve been an annual passholder before, but Disneyland with kids is next level. To be able to head to The Happiest Place on Earth multiple times a year is like my nirvana.

But! Whether or not you have those annual passes, you’ve gotta factor in the cost of spending a day in Disneyland, which can get spendy.

So we really got it down to a science when it came to how to go to Disneyland on a budget.

And speaking of your next Disneyland trip, you’ll want to check out these posts with my very best secrets and hacks, learned during my time as a parades cast member!

But if you’re into Disneyland and really want the good stuff, you don’t want to miss my free Disneyland Resort Guide, below! It’s filled with some of my very best insider tips to help you plan your most magical trip ever. Sign up below.

How to Go to Disneyland on a Budget

We used our annual passes last year to visit the park for about 15 days total. And once you add up 15 days in Disneyland, it’s easy to see how an annual pass becomes wayyyy more expensive than just the price of the tickets.

But we created a bunch of tips and tricks, so we wanted to share ideas about how to go to Disneyland on a budget, in case you want to know our secrets!

For starters, don’t be afraid to take them young! Disneyland doesn’t charge admission for guests until they turn three years old, so that’s why we got annual passes just before Maggie’s 2nd birthday. She was free every single time.

Stay Across the STreet

Yes, those Disneyland hotels are beautiful and fun and close to the parks, but they can seriously break the bank. We stayed at the Grand Californian just once out of all the times we went, which was a huge splurge.

The rest of the time we stayed directly across Harbor Blvd. from the entrance to the resort at one of the hotels there (The Tropicana, Best Western Plus Park Place Inn, etc.).

They’re basic hotels but totally serviceable, and some of them come with free breakfast. You pay a fraction of the cost of a resort hotel, and some of those hotels are an equal walking distance to the park gates as the two farther resort hotels (Disneyland Hotel and Paradise Pier Hotel).

Everything! If you’re really trying to go to Disneyland on a budget, it takes a bit of pre-planning and packing. But one great thing about the parks is that they allow you to bring in your own food and drinks (and that’s where you really drop some dollars, especially with a large group or family).

We always pack our own snacks for the kids throughout the day. I also make sure to bring a reusable water bottle and just fill it up at the fountains. (Don’t bring any glass bottles, though!)

I’ve never done it myself, but I’ve seen plenty of moms sit down with their families and pull out entire meals that they packed themselves.

Other things to consider bringing so you don’t have to buy: water, snacks, meals, sunscreen, extra clothes for after water rides, sweets/treats, hats, umbrellas, cell phone chargers, stroller (make sure yours meets the measurement restrictions), etc.

Speaking of BYO items, there have been a couple of times where we secretly bought a Disney souvenir ahead of time and brought it into the park to give our kids instead of buying souvenirs there.

This is an awesome idea if you happen to hit a Disney store sale or outlet. Older kids might not be super into this but for little kids, they don’t know the difference.

DIY Your Own Disney Merch

I did this multiple times throughout the year that we had our Disney annual passes and loved it! I actually shared a tutorial on how to make your own Disney shirts using a Cricut machine, with two free patterns that you can download and create.

If you pre-plan a bit, you can save a ton of cash by making your own t-shirts, bags, hats — you name it. Check out our tutorial for more.

You can also probably even beat the park prices by getting shirts ahead of time on Etsy or somewhere similar.

Use This Trick To Get Great Photos

Lots of people purchase Genie+ now, which comes with a PhotoPass. But those additional costs really add up.

However! The PhotoPass photographers will take photos of you on your own phone or camera for free! They’re super nice about it and know how to take a great picture.

Bonus tip here: Consider making photos your souvenirs, rather than buying a bunch of stuff. Here’s a really thorough post I wrote about how to take good family photos at Disneyland.

And This Trick To Get Affordable Souvenirs

If you have kiddos who really want to get a souvenir in the Disneyland Resort parks, one insanely affordable way to do it is by playing the games at the Pixar Promenade on Pixar Pier in California Adventure.

It’s $5 a play, and the winner always gets a character plush. So if you wait until your family can play alone, you’re guaranteed to win something.

If you’re playing against more than 4 people, you win a larger character plush. It’s a great deal for a stuffed animal souvenir.

I swear by the packs of Mickey Mouse lollipops that you can get at lots of merchandise stores in the parks.

It’s a pack of 5 lollipops for about $6, which is a steal of a deal to get authentic Disneyland sweets for 5 people. (I’ve seen them selling online for $20 for the 5 lollipops!) We sometimes bring a couple of packs home to keep on hand as treats.

There you have it! My best tips for how to go to Disneyland on a budget. One final thought: we often would decide ahead of time what was important to us to spend money on, and save elsewhere.

As an example, I knew during fall that I wanted to try a couple of fall treats in the park, so we prepared the kids that we wouldn’t be getting any souvenirs and we’d be spending our money on the sweets. Just another idea for ya.

I’d love to hear if you have any more budget Disneyland tricks up your sleeve! Leave me a comment down below. xoxo