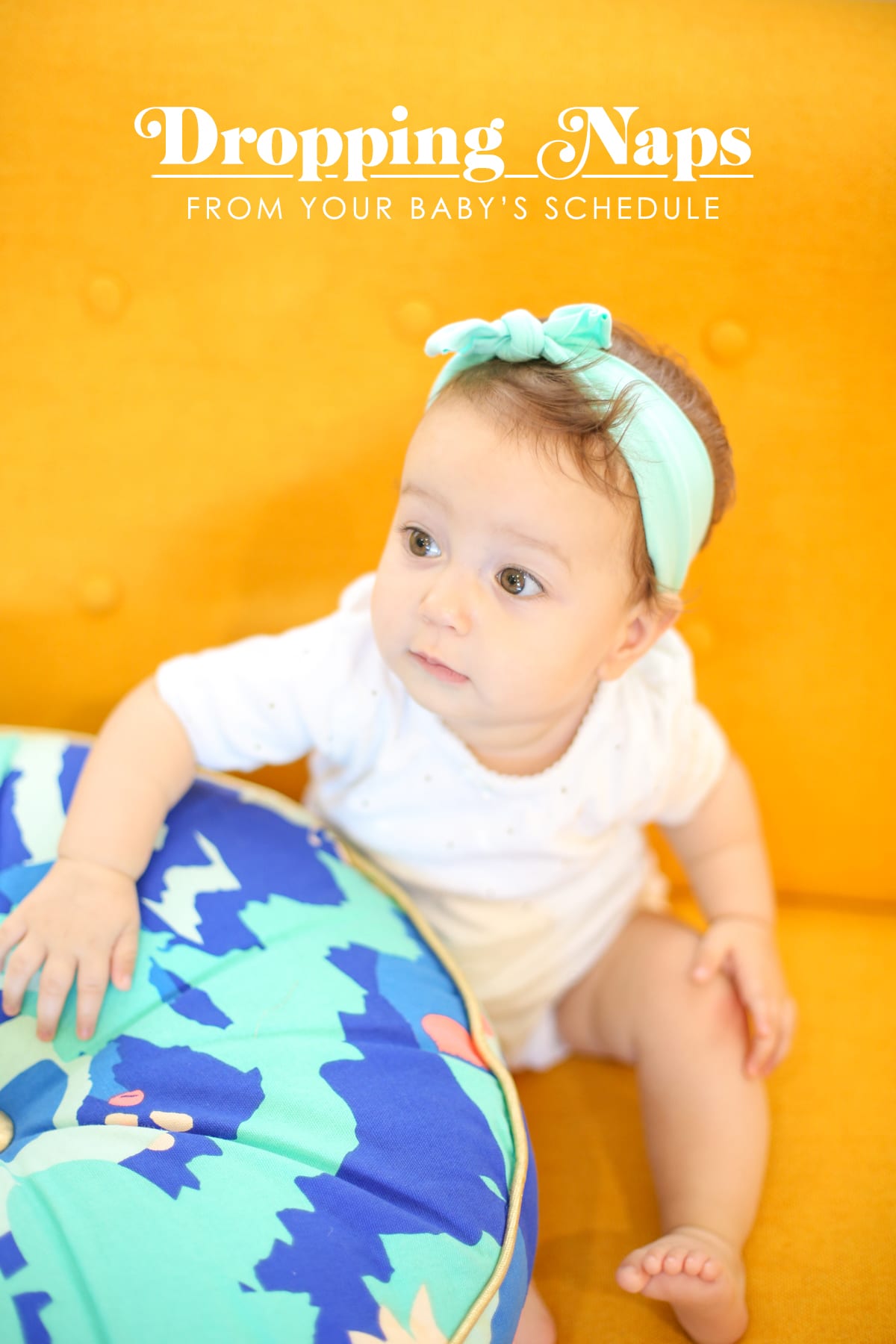 I always have my best days when I hear from you guys that something I shared here has been helpful. I love it! So many of you have gotten some tips from our post about getting a baby to sleep through the night, so it’s high time we shared the next step: how to drop naps from your baby’s schedule. So read up on our first post to get the groundwork, and we’ll pick it right up where we left off!

If luck was on your side, you’ve hopefully got a baby who’s sleeping through the night and taking a few regular naps during the day. We arranged our kids on a loose three-hour schedule, with a feeding every three hours (ish) and 4 naps total. Right at around 3 months, both of our kids were taking 4 naps a day on a pretty regular schedule, and sleeping through the night more or less. For the sake of a timeline, let’s use Maggie’s schedule: she napped at 9:30, 12:30, 3:30, and 6. So. What happens next?!

3-4 Months You’ll probably notice that baby’s last nap of the day starts going south. Maybe it just becomes a 10 minute cat nap, or maybe they don’t want to go down at all. This one is the easiest to nix because they’re ready to give it up. They’re starting to be more wakeful and alert during the day, and they just don’t need that extra sleep. Drop it cold and see what happens. We didn’t purposefully change our feeding schedule at this point, but we did move the third nap a little later — so Maggie was now napping at 9:30, 12:30, and 4. It just helped stretch her a little longer so she wasn’t super fussy before bedtime. Another note — we didn’t move her bedtime any earlier, either. Her morning waketime was great and we didn’t want to mess with it. We also wanted to be putting both kids to bed at the same time. So we just adjusted that last nap and it worked. If your kiddo is having trouble adjusting a nap time, move it by 5-10 minute increments until it’s where you want it to be.

7-9 Months Baby will probably be growing and passing milestones by leaps and bounds at this point! He’ll also probably start fussing about his third nap. Look for the same cues — the third nap will become short, lack quality, or maybe he won’t go down at all. So follow the same process as last time and drop it. We tend to drop our naps cold, but you can also gradually do it by shortening the length of the nap that you want to drop. Day by day, cut it a few minutes shorter and wake them up out of it until it’s gone. Our kids never really batted an eye when we dropped a nap because it was pretty clear they were ready for the next stage. So get the nap dropped, and then again, adjust the remainder of the schedule around it. I really wanted our kids’ afternoon nap to be simultaneous, so Maggie’s nap schedule became two naps, one at 9:15 am and one at 1 pm (with Henry). Her morning nap actually got a little earlier after we dropped the third nap for some reason. It wasn’t a specific choice we made, we were just tracking her cues and watching her get sleepy a little earlier. So she would wake up in the morning around 7 and need a nap just a little over two hours later. Also, her afternoon nap stretched out by probably 20 minutes after we dropped the third nap.

One Year – 18 Months I’ve heard of kiddos dropping their morning nap around a year, but Henry held onto his until he was 18 months. And you better believe I rocked that out! Naptime is everything, y’all. Look for the same cues here, but be careful that you don’t get tricked! Henry would go through phases where for a week he would protest at this nap but then for another month or two after that have a great morning nap. So if you’re going to cut it, be sure that the kid is ready. I’d say if they fight it for a good couple of weeks, you’re probably okay to cut it. After cutting it, you’ll probably also notice that the afternoon nap lengthens. You may need to adjust time for the afternoon nap — we pretty much kept it at the same time (lunch, a little play time, and down for sleep around 1 pm).

And that’s where we are, folks! I can’t give you any advice on dropping that final nap, other than to say: don’t do it too soon! I think it’s perfectly reasonable (and AWESOME) for three and four year olds to still take a snooze in the afternoon. And after that last nap is gone, we plan in instituting a “quiet time” to replace it, so we can all relax a little in the middle of the day. If you have any questions I can answer, don’t hesitate to leave a comment! This sleep business is tricky stuff, and the more we can help each other, the better. xoxo