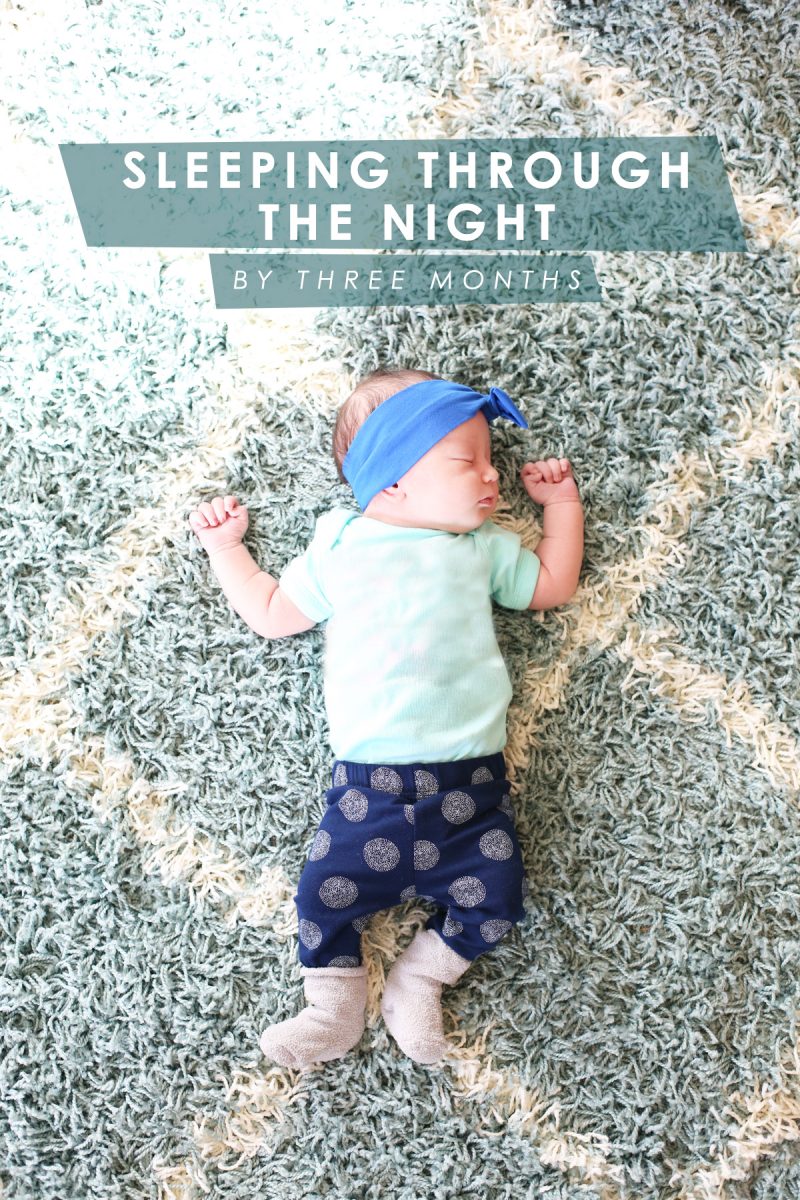 Let me start this post by just saying that we are by no means sleep wizards over here. One of the heaviest challenges of parenthood, in my opinion, is sleep and all of the drama that comes along with it. And we are not without those challenges, to be sure! But somehow, we figured out more or less what worked for our kids and how to get your baby to sleep through the night. We’ve had so many questions about how we did it (and I spent many wee hours googling about baby sleep patterns in the kids’ early weeks), so I thought I’d break it down in a detailed way.

So probably this isn’t for you, 20-or-30-something-gal-with-no-kids-in-sight. But trust me when I say that if kids are anywhere in your future, you’re gonna want to bookmark this. Because there is no more desperate time than 3 in the morning when the kid won’t sleep and all you want are a few consecutive hours of z’s for yourself. Now let’s get down to business.

How to Get Your Baby to Sleep Through the Night

With Henry, we seemed to hit on a sleep training process that worked really well for our family. I read Baby Wise

but it was just a bit too hard-edged and absolute for me, so we did a modified version. What we did worked well so we essentially repeated it with Maggie and it’s working again. Here are the basics, with more details down below.

Baby sleeps at night in a bassinet

in our room,  on my side of the bed. We feed on demand, any time baby is hungry, which is pretty much every 2-3 hours at night. (This month is brutal.) During the day, we start establishing a routine from day one of eat-awake-sleep. Baby naps wherever they want during the day.

Same nighttime routine but baby tends to wake every 3-4 hours. During the day, baby starts napping in their room in the crib

. We also start stretching the daytime routine into a daytime schedule of eating every 3 hours. This translates to a four-nap schedule.

Baby moves to crib in their room at night. Daytime routine becomes more solid, with regular nap times and feeding times. This is also when we start putting baby down awake for naps to let them learn to get themselves to sleep. This, for us, was the start of a little bit of crying it out. Toward the end of this period, the 4th nap is dropped and baby is on a three-nap schedule. At the start of this period we begin a dream feed, and toward the end we phase out the dream feed. At the end of this, both kids were sleeping through the night.

For us, how to get your baby to sleep through the night has depended on a few things: a regular daytime routine/schedule, getting good feedings in, swaddling, and having the guts to let the kids cry a little bit. Let me break it down for you.

Weeks 1-4 are pretty much a battle zone. You’re buried in diapers and bodily fluids and you’re so exhausted your eyes are crossing. Just batten down the hatches and push through. I know for a lot of people it seems too soon, but I swear by starting a routine with baby from day one. Not a schedule, but a routine. Feed them, try to keep them awake and playing for a bit, and then let them nap. At this stage, “awake and playing” probably means things like changing clothes, staring into each other’s eyes, maybe a little bit of tummy time — very minor stuff. And lots of babies can barely keep their eyes open for 5 minutes after they eat. That’s okay. Just keep striving toward that routine. We fed on demand for the first month, so sometimes the routine gets skewed when baby cluster feeds or is just having an off day. That’s okay. The kid is in charge at this point. But the routine sets them up for good sleep down the line; it lets their bodies establish sleep and awake patterns and trains them to know what to expect and when.

Also, it’s worth noting that we have always swaddled our babies. We use these

swaddle sacks and I love them. We swaddle from day one and usually the kids want out of them around 3-4 months.

Toward weeks 5-8, baby will probably get a little more alert during awake time and you can start to see what the routine will develop into. This period, for us, is when the routine turns into more of a schedule. As an example: I wanted Maggie’s day to start at 8 am. So that’s when I start her first feeding of the day, give or take 20 minutes (flexibility is key, guys). And I know that she needs to eat about every 3 hours. So Maggie’s schedule developed very naturally into feedings at 8, 11, 2, and 5. Her bedtime feeding is a little closer to fill her up before bedtime, so we feed her at 7:30 and put her down for bed. This schedule also meant that her naps got more solid, interspersed between feedings.

We also started teaching the kids to nap in their cribs around this time. Yes, it’s so much easier to get them to nap in their swings or in your arms or in a carseat, but in the long run you’ll be so glad that they know how to sleep in their cribs. The transition to crib naps was a rough one for Henry and easier for Maggie. But even Henry figured it out after a couple of weeks.

As a caveat to the napping-in-the-crib thing, let me say this. It can be so easy to feel like you’re chained to your house when you’re sleep training. “Sorry, can’t go anywhere, my kid is about to nap again for the zillionth time today!” We aren’t super strict about it, though — if we want to get out of the house or need to go do something, Maggie does nap in her carseat. And I don’t feel bad about it at all. We just try to stick to a loose version of the schedule to get her the right number of naps a day. And we also try to keep it to a reasonable number of naps in the carseat. If we’re on a day trip, no problem. She takes all her naps there or while I’m wearing her. But the next day I try to give her a solid schedule at home so she doesn’t get too interrupted. Again, flexibility is the name of the game!

During weeks 9-12 you’re so close you can taste it! Nap-wise, this period was sometimes tough because it’s when we started putting our kids down awake for naps. Maggie is an absolute champion at putting herself to sleep. Henry. Was. Terrible. So we did some crying it out with him. We would do his nap or bedtime routine, tell him it was time to be sleepy, and walk out. Usually he would cry. We would let him cry for 5 minutes, go in, comfort him but not pick him up, and tell him it was still time to be sleepy. Then we would wait another 5-10 and do the same, and so on. If he was REALLY freaking out we would pick him up and calm him down. But mostly it was just whiney crying where he wanted someone to rock him to sleep. I’m gonna be honest: sometimes a whole nap period would pass and he wouldn’t get to sleep. But after a week or so of this, he could put himself to sleep and he was absolutely not damaged from crying it out.

We moved both our kids to their own rooms at night at 8 weeks, and both of them still needed one middle-of-the-night feeding, which faded within a couple of weeks. Around week 9 is also when we started a dream feed. We would put them down around 7:30-8 after their last feeding, let them sleep for a couple of hours, and sneak in for the dream feed at around 10:15. For the dream feed, we don’t wake them, change diapers, or unswaddle them. They take a feeding, I hold them upright for a bit to digest, and we set them back down. This extends their long stretch of nighttime sleep to get them closer to sleeping all the way until the morning. When the kids were sleeping until around 7 am solid for a week or so, I dropped the dream feed cold turkey. BOOM. Sleeping through the night.

So there you go guys. Everything I know about how to get your baby to sleep through the night. Again, I’m no doctor or expert, but I’ve been where you are in the trenches and I know that it can be one of the toughest struggles in parenthood. I SO hope that even a few of these tips are helpful for you. And if you have any questions or I’ve left anything out, please leave a comment! I’ll try to be as specific as I can. Sweet dreams, gang! xoxo