Lovelies, I’m taking a bit of a departure from the norm today to talk about something near and dear to my heart: going to the theatre.  Being an actor, I find myself onstage as often as I do in the audience, and I have to say — audience behavior and comportment is equally important from both perspectives.

I was recently in the audience at a Broadway show (which shall not be named).  This particular show is presented in such a way as to attract not so much the avid, high-brow, borderline-snobby theatregoer, but a more mainstream audience.  And that’s wonderful!  I love that musical theatre is becoming more present in popular culture.  But as I was sitting in the audience with folks who clearly don’t usually attend theatre, it became clear to me that maybe the case was that they just flat-out didn’t know what was considered appropriate audience behavior, and what wasn’t.

So.  Let me drop some knowledge on you.  First off, let me say that none of this is meant to sound patronizing, snooty, or highfalutin’.  I truly just want to spread the word, and maybe shed a little light on your next theatregoing experience (whether it’s in the theatre district or at your nephew’s high school play). 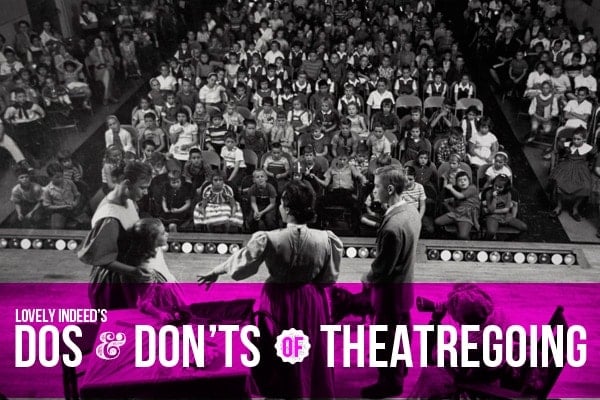 DO get settled in your seat before the show starts.  This includes unwrapping coughdrops, taking off your coat, and turning off your cell phone.  And by off, I mean off.  Sometimes a vibrating phone can be just as loud as a ringing one, not to mention the fact that your phone’s frequencies can mess with the wireless microphones used onstage.

DON’T get there late.  Nobody likes the lady that has to crawl over them during the first scene.

DO take the time to look nice!  Going to the theatre used to be an absolutely fancy affair.  I think there’s something wonderful about dressing up just a bit to take in a show.

DON’T talk during the overture, if you’re seeing a musical.  Once the conductor’s arms are up, the show has started.  Enjoy the music!

DO eat before the show; not during it.  I kid you not, a friend recently went to a Broadway show where the woman behind him unwrapped and ate a roast beef sandwich.  This ain’t Subway.  Leave the food home.

DON’T have full-on conversations during the show.  You’re not in a bubble.  Other audience members, who have paid dearly to have the same experience you’re having, can hear you.

DO a little research before you go!  Unless you’re really into the element of surprise, it’s awesome to know a bit about the show, writer, composer, actors, and so on.

DO show your appreciation for the hard work that’s going on onstage!  Applause is great.  If, at the end of the show, you’re so moved you simply can’t stay seated, a standing ovation is great too.  Shouts of “bravo!” are awesome.  Not awesome?  Awkward whistles during a love scene, low “oooooh”s when one character snubs another, or any equally lame responses.  Unless you’re seeing a melodrama.  Then “boo” away.

One more DO: go!  Go to see live theatre.  It’s unlike any other art form, and it’s amazing.  Support your local community productions.  Take a drive to the closest regional theatre.  Hop on a plane and see a Broadway show.  Appreciate and support all of the work, creativity, time, and effort that goes into putting a show together, from the set designers, to costumes and lights, to the orchestra and the actors.  Theatre makes the world a better place.  Go.  xoxo

12 thoughts on “dos & don’ts of theatregoing”