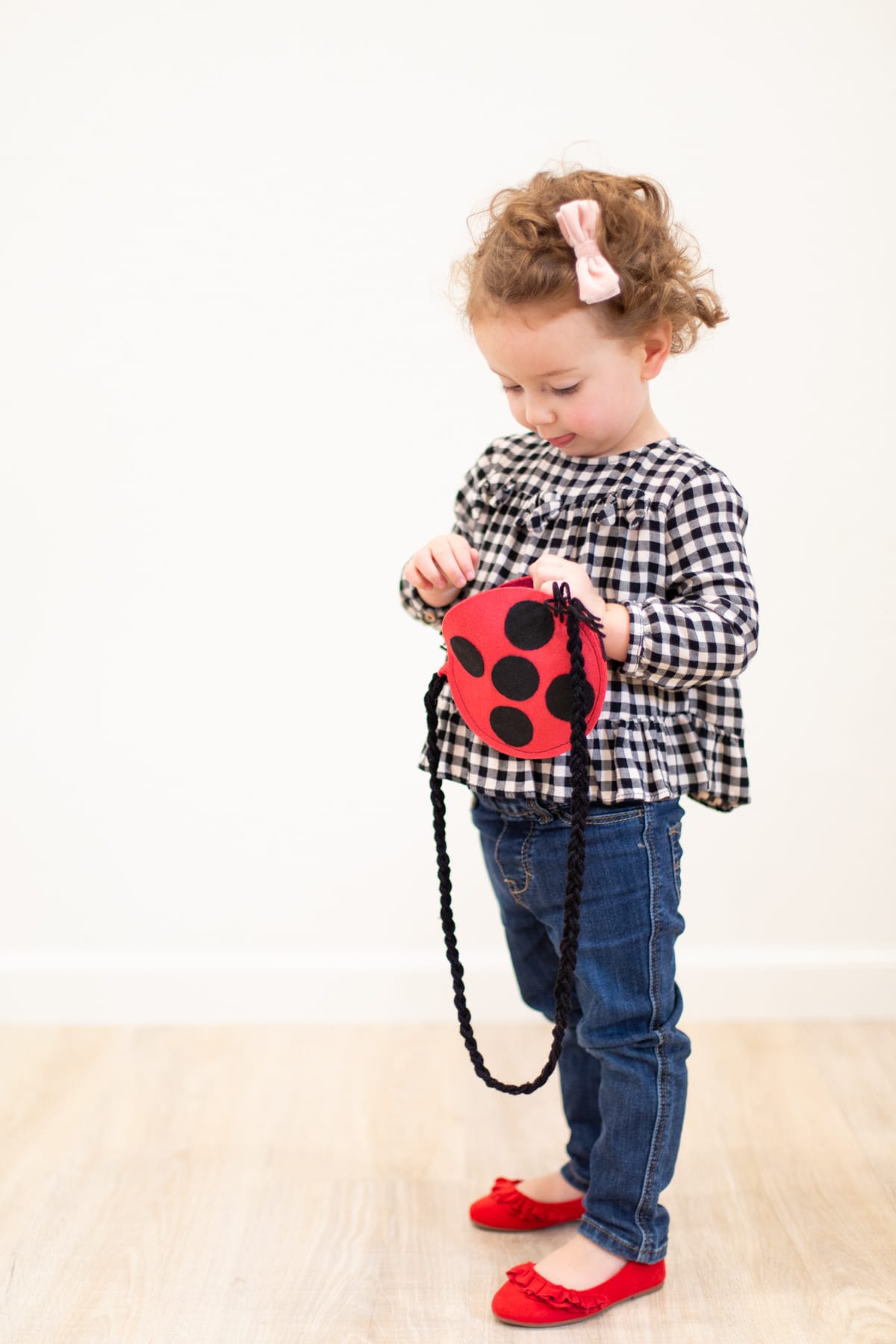 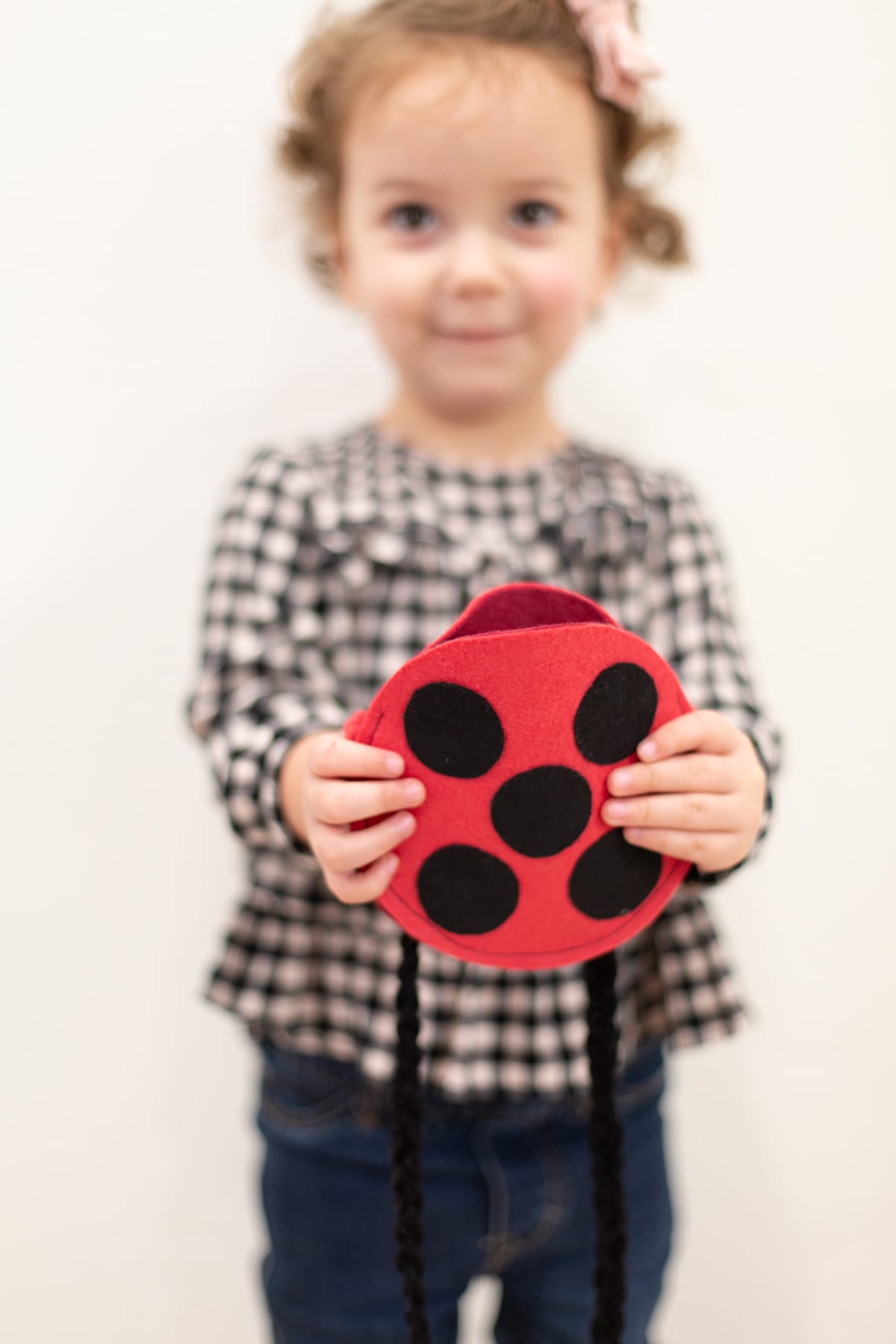 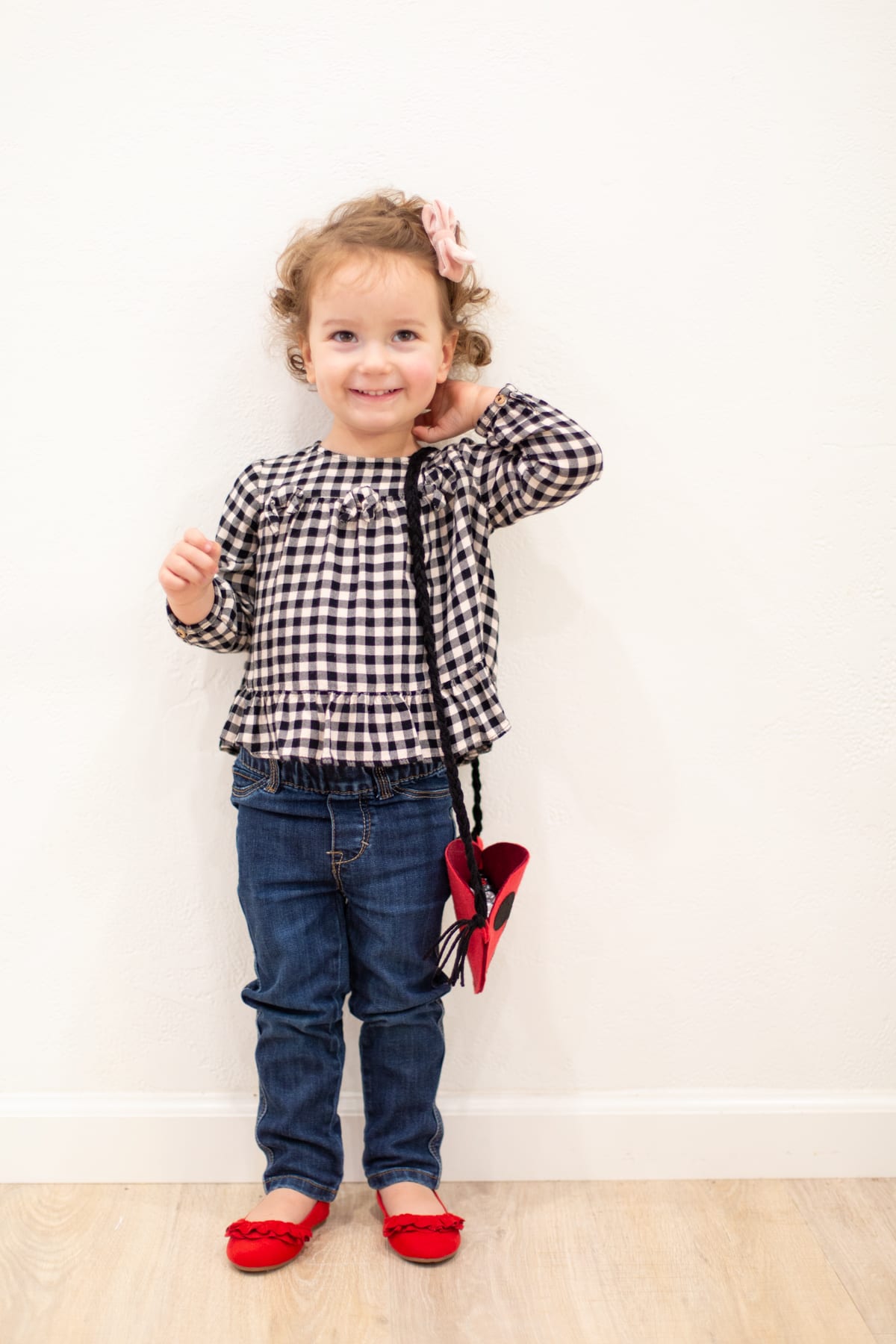 Okay, okay, so this was going to be a stocking stuffer for Mags but I just couldn’t wait. This little ladybug purse is one of her new favorite things — she drags it all over the house saying, “I need to put in my trinkets.” I mean, come on! We decided to make her a ladybug purse because she and Henry are both newly obsessed with Miraculous, an animated series about a teenage girl whose alter ego is a superhero named Ladybug. She runs around the streets of Paris saving the day over and over with her superfriends, and the kids are so. into. it.

I have to say, as far as kids’ programming goes, Miraculous is one of my favorites. It checks so many of the boxes that we’re looking for when we’re deciding what to let our kids watch. I love that there’s a strong female lead who is saving the day right next to her friends, who are all super diverse. I also love that there’s just about zero sassy or rude dialogue, which is one of my huge red flags with kids’ shows. Kids pick up everything so fast, so I love that Miraculous has characters that all set really great examples. The characters do, however, have to learn to deal with challenges and overcome obstacles, which is another thing that I like. It’s not always rainbows and sunshine. And I would be lying if I didn’t say that a huge reason I love it is that it’s set in Paris. 😉 The kids keep telling me they want to go there someday and I’m like BE STILL MY HEART. Haha! 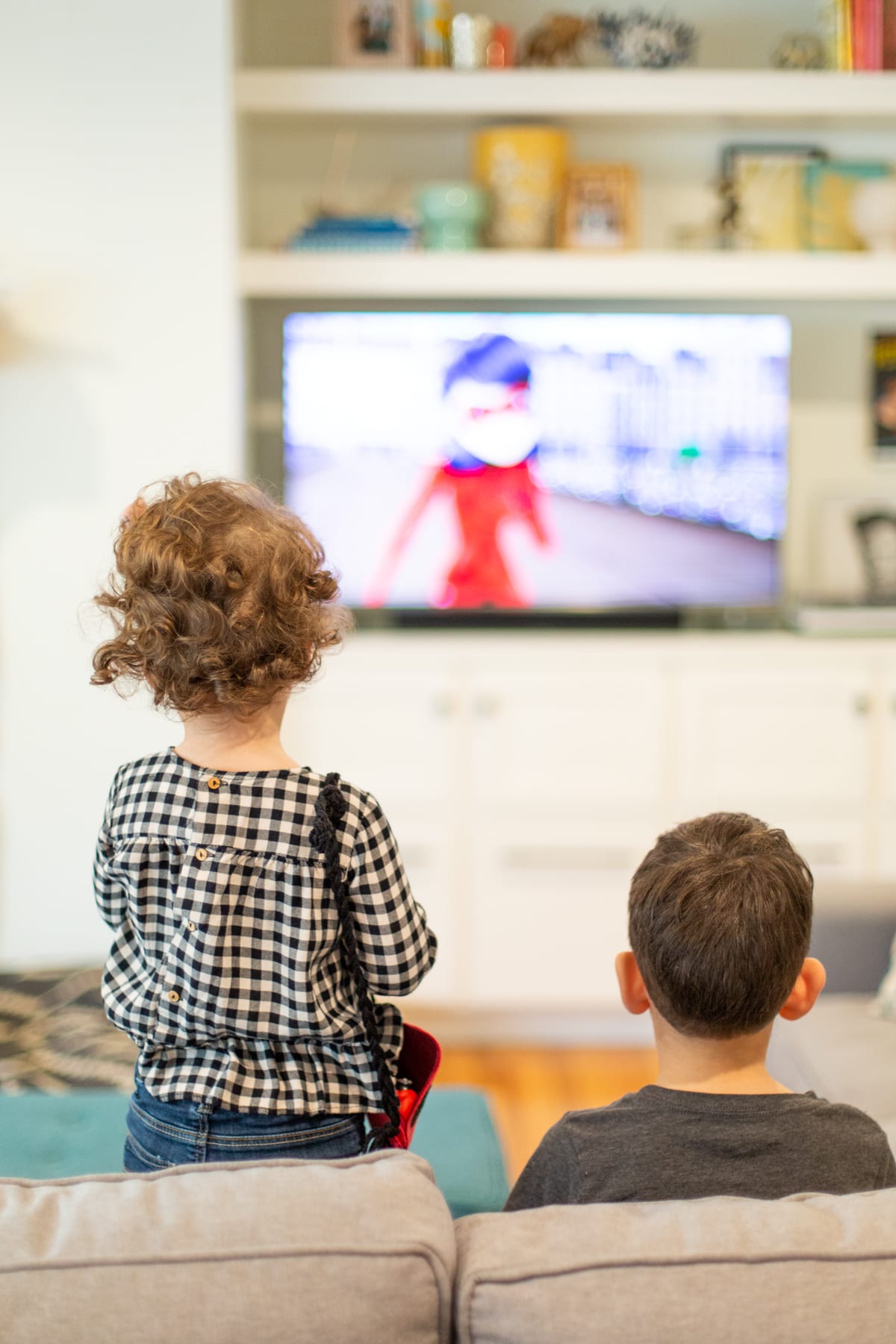 The heroine’s name is Marinette, and whenever she transforms into Ladybug to fight evil, she has a little ladybug-shaped yoyo, which she uses to help save the day every time. And that, friends, is the inspiration for Maggie’s purse! It looks just like Ladybug’s yoyo, which has Mags totally fired up. 😉 Here’s how you can make a little ladybug purse, too.

Step 2: Trace two large circles on one side of the felt (we used a salad plate). Cut out these circles. Then trace five smaller circles onto the HeatNBond paper that’s on the back of the black felt (all five should be able to fit on the larger felt circle). Cut these five out as well. 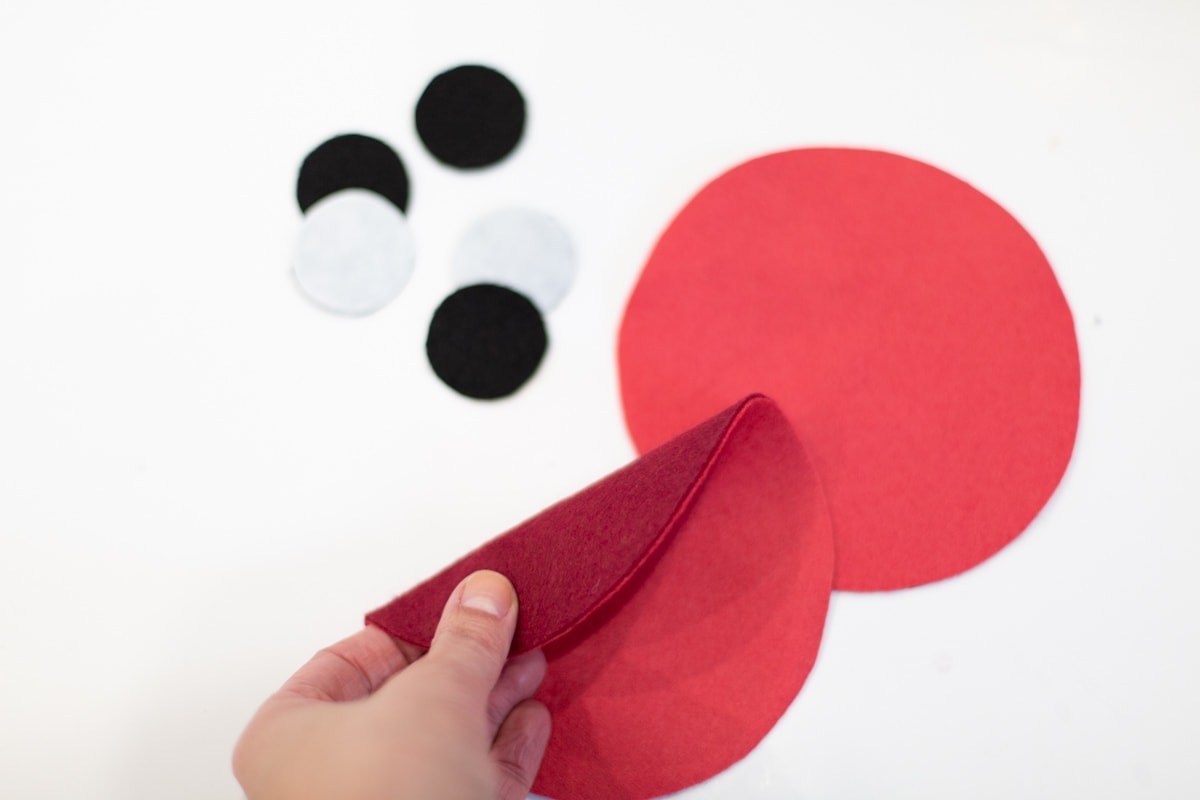 Step 3: Remove the paper from the HeatNBond on the black felt circles and arrange them on one of the light red circles, with the exposed HeatNBond face down. Iron these onto the red circle.

Step 4: Cut two small strips of red to serve as loops to attach the purse strap. 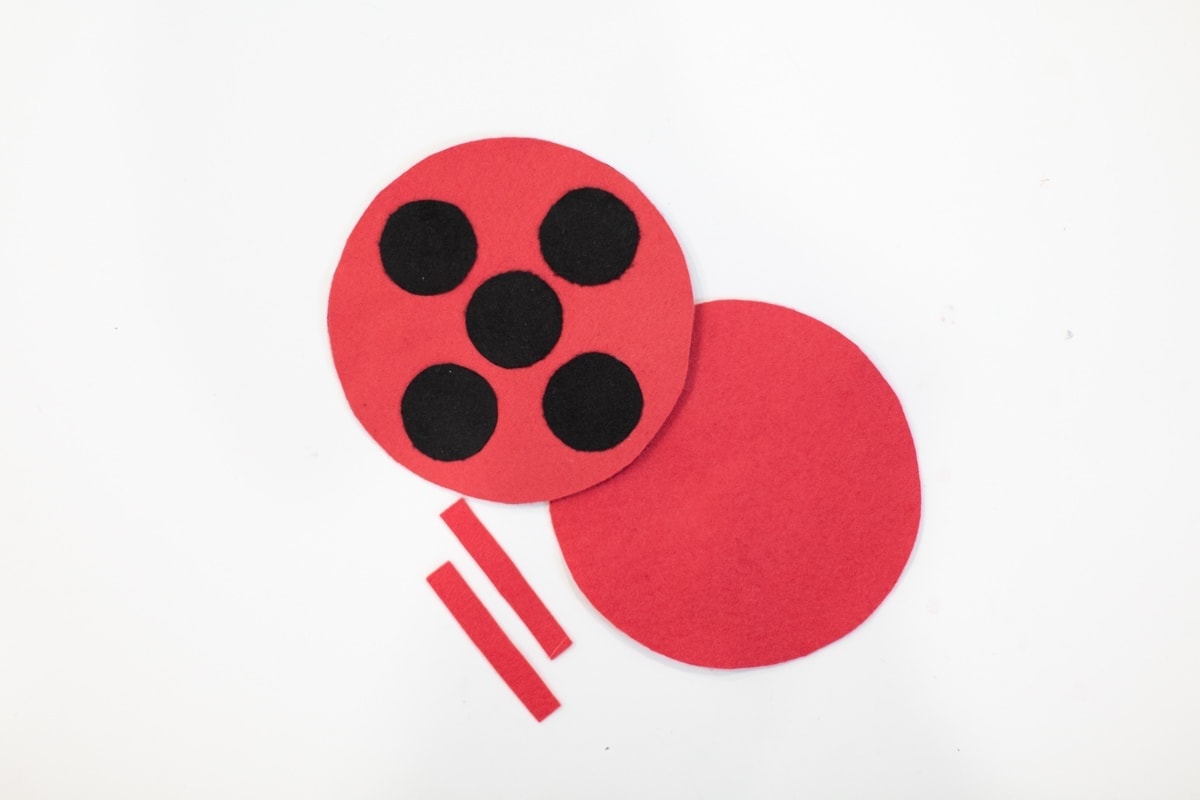 Step 5: Fold the strips in half and sandwich them between the red circles, with the dark red sides facing each other. Sew a straight stitch around the lower 2/3 of the circles, including the loops but leaving the top open to be able to put things into the purse. If you don’t have a sewing machine, you can do this step with a glue gun. 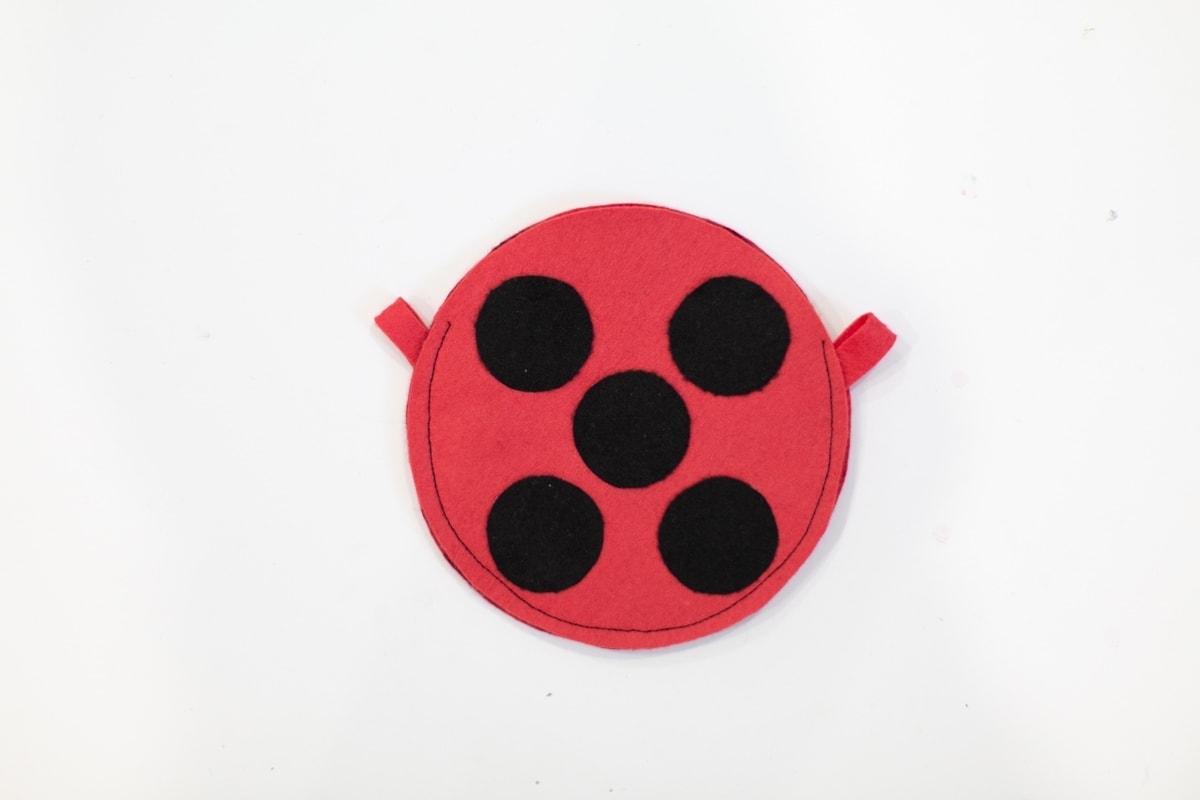 Step 6: Cut 9 lengths of black yarn, each about 5 feet long. Insert one end of all of the yarn into one of the loops and knot the ends.

Step 7: Braid the yarn (in three groups of three) until you reach the end, and knot this end in the other loop. Trim the ends of the yarn into neat tassels. 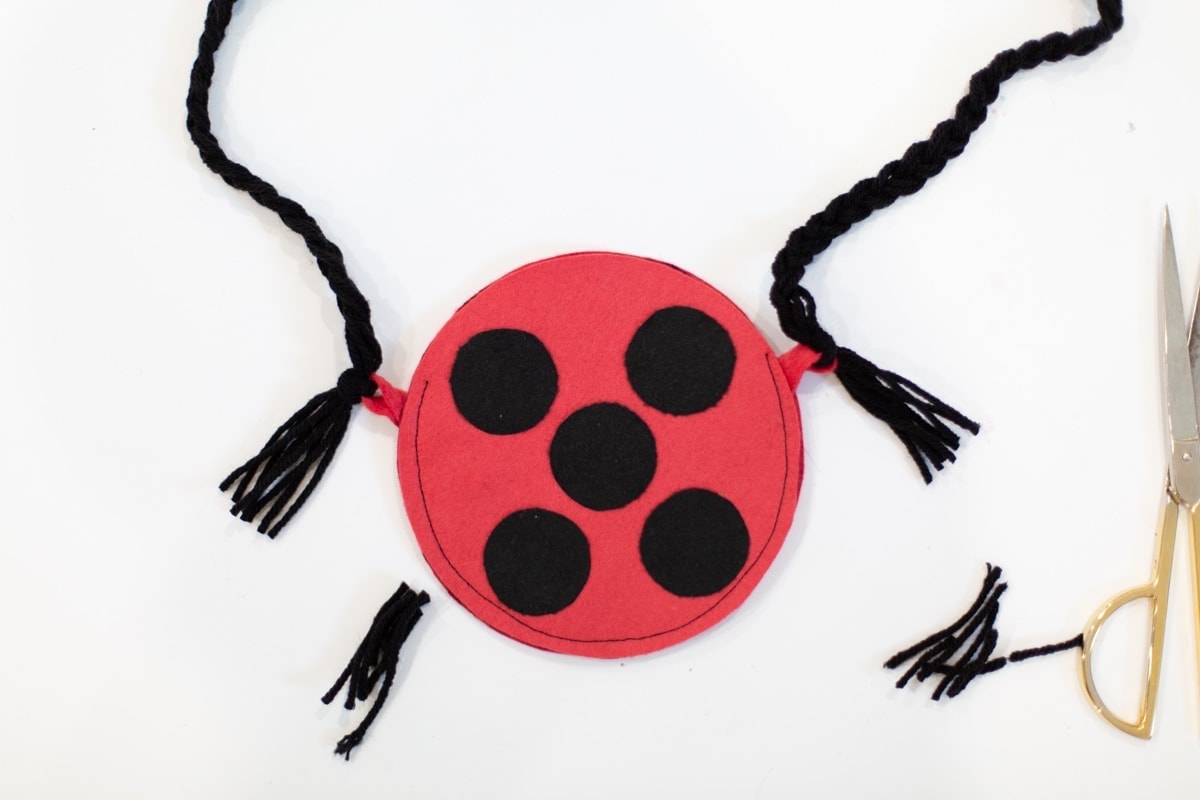 Give it to your babe and let her (or him!) have a ball! Maggie spends half her time putting things in and out of the purse, and the other half pretending it’s her yoyo and she’s saving the streets of Paris from evil. (And you better believe that Henry is constantly trying to get in on the action too.) Have you ever seen Miraculous? I’d love to know your thoughts if you check it out. And I’d love to know your criteria for what your kids watch! xoxo

This post is sponsored by Miraculous. All ideas and opinions are my very own. Thank you for being supportive of the partners who help keep Lovely Indeed rocking! 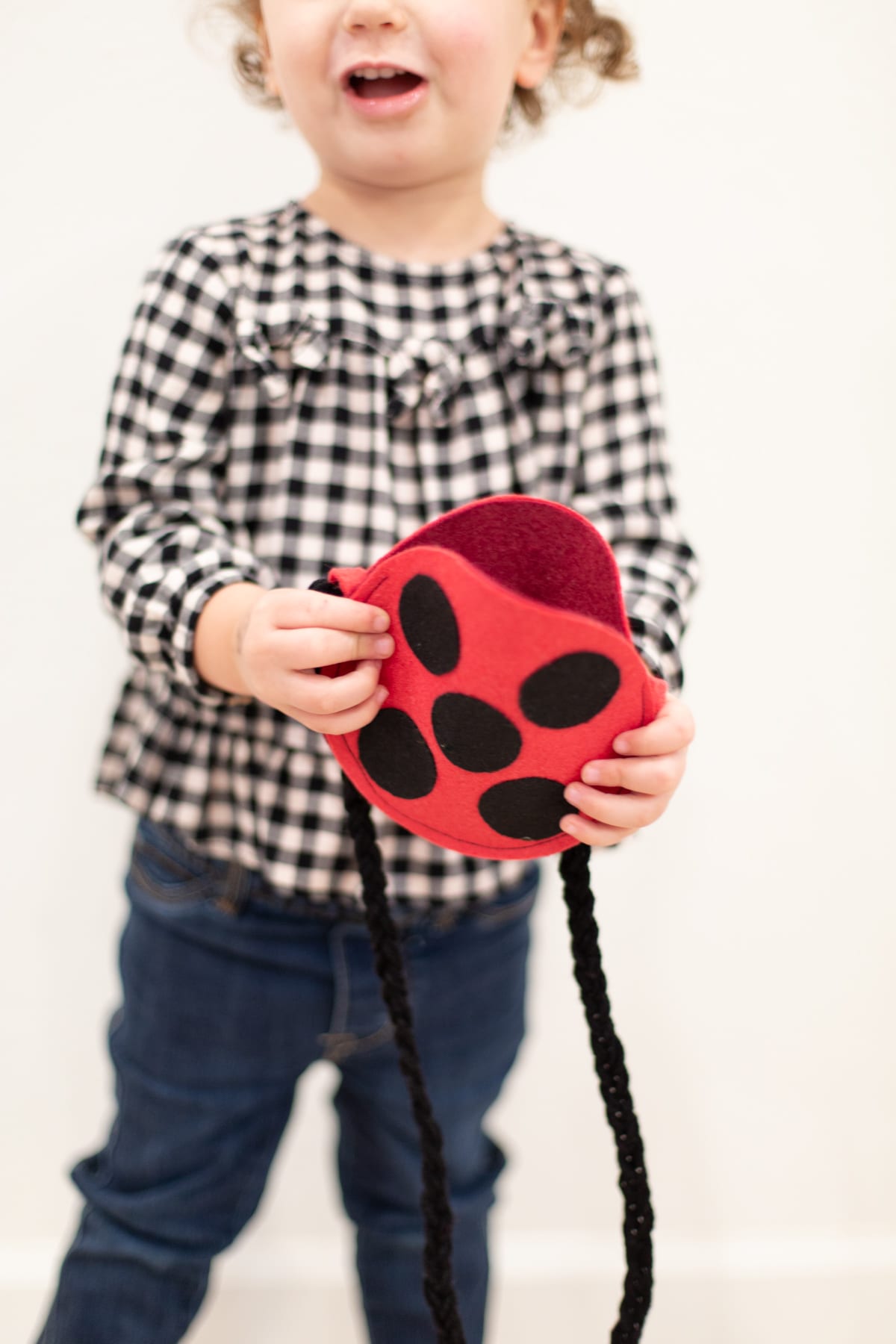 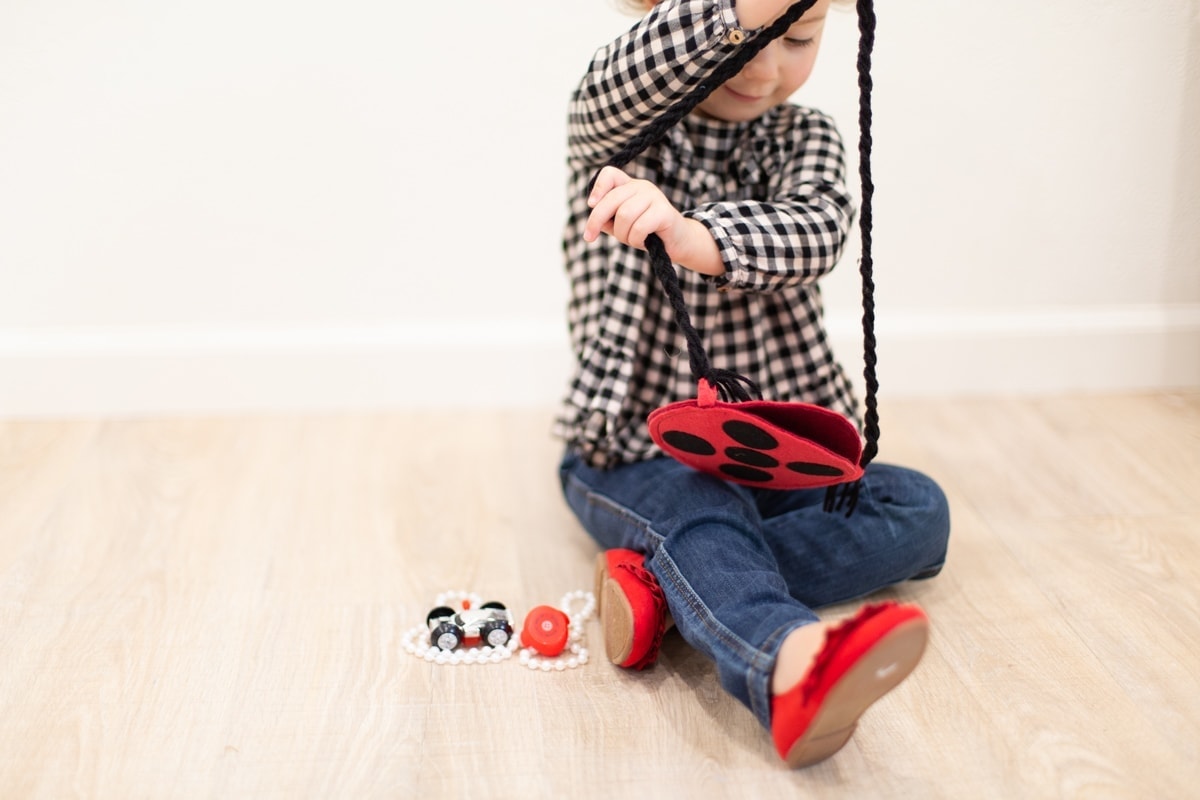 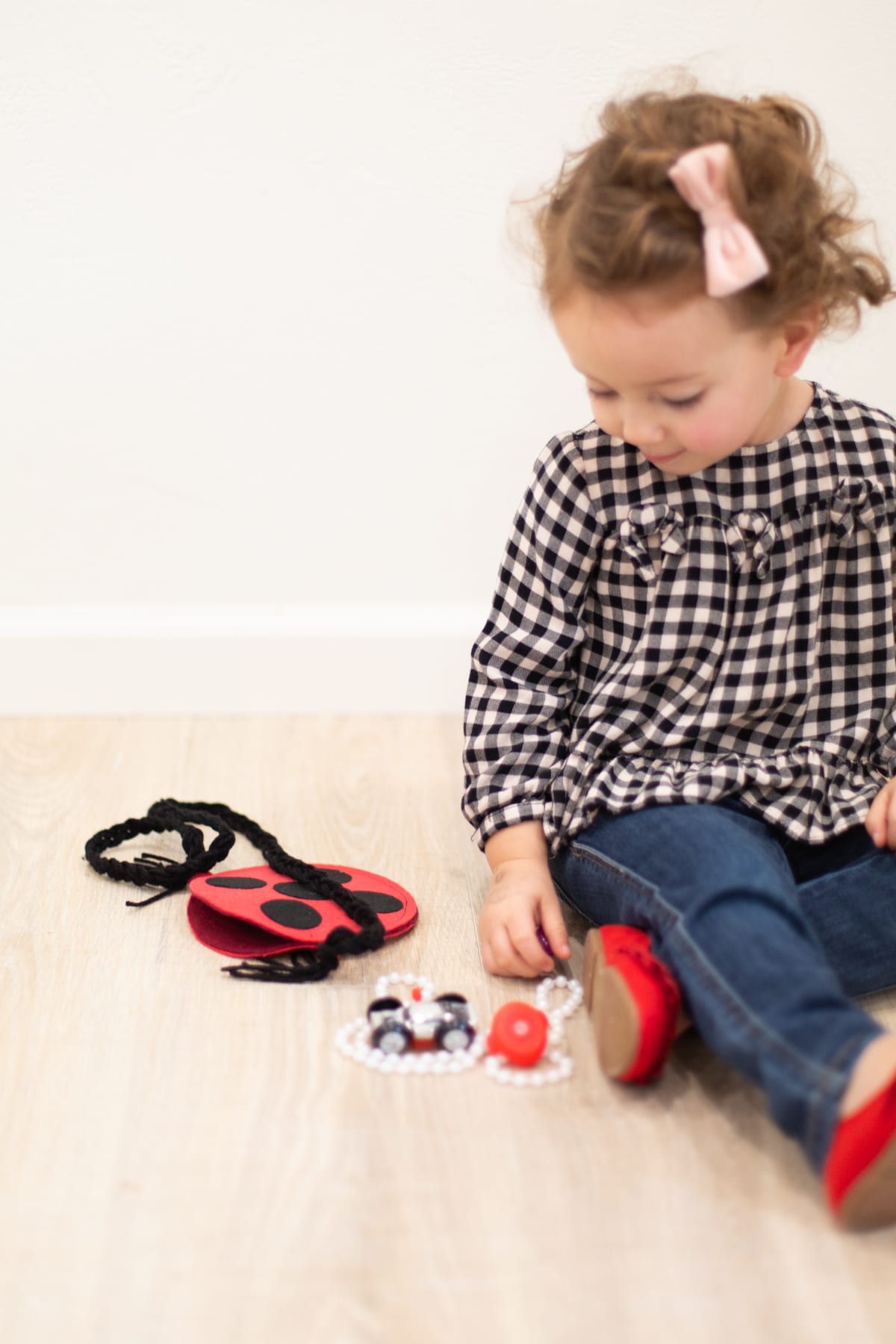 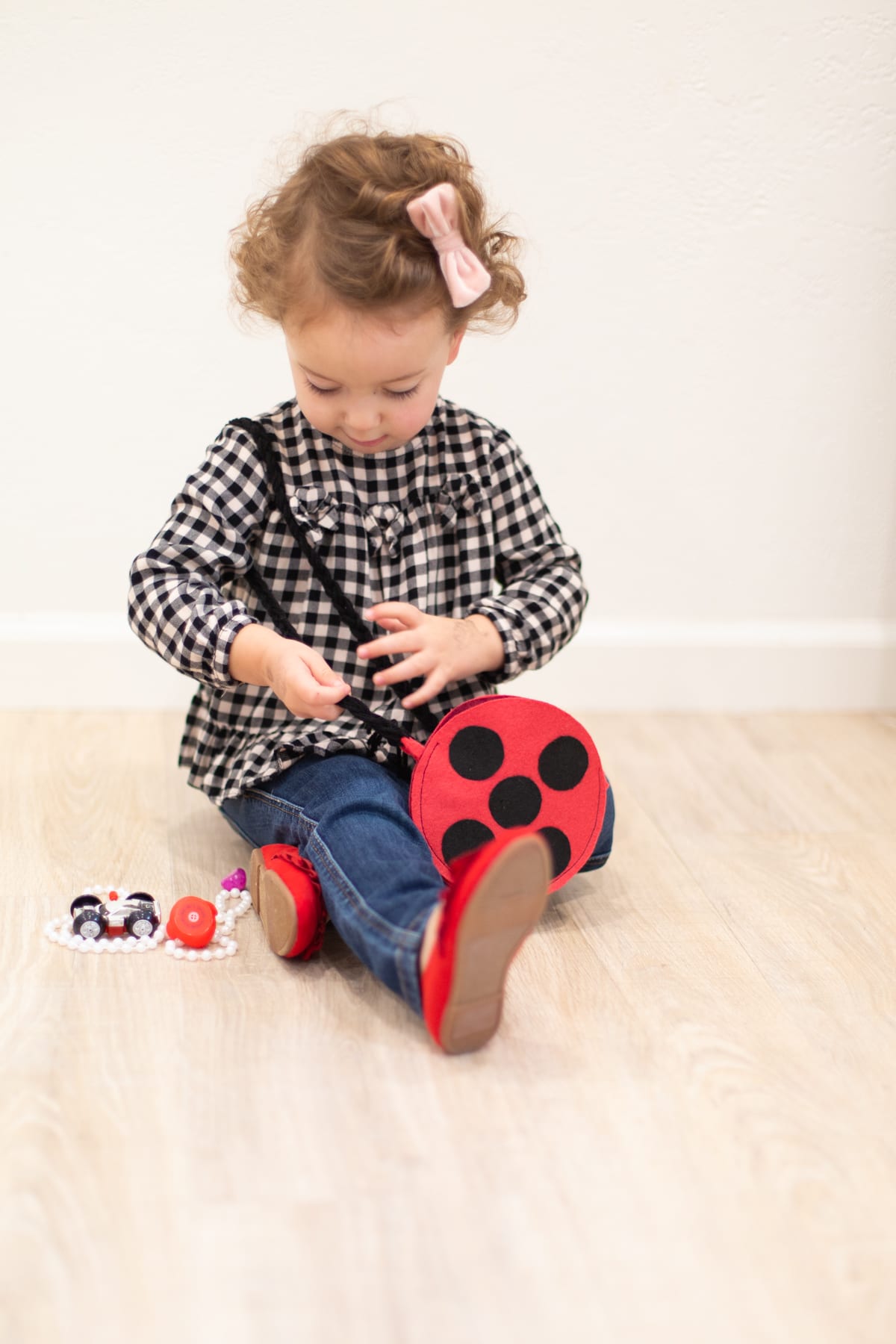