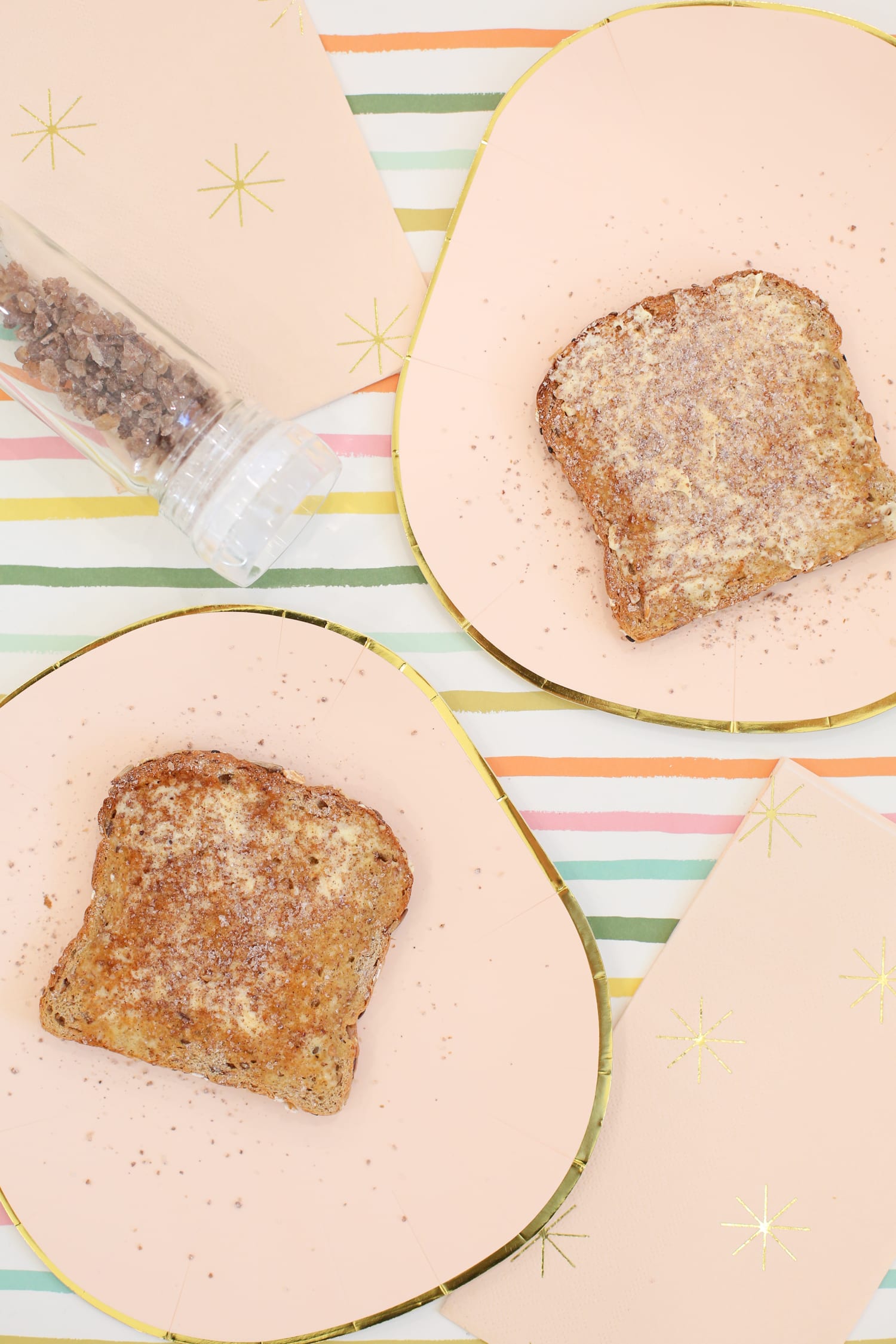 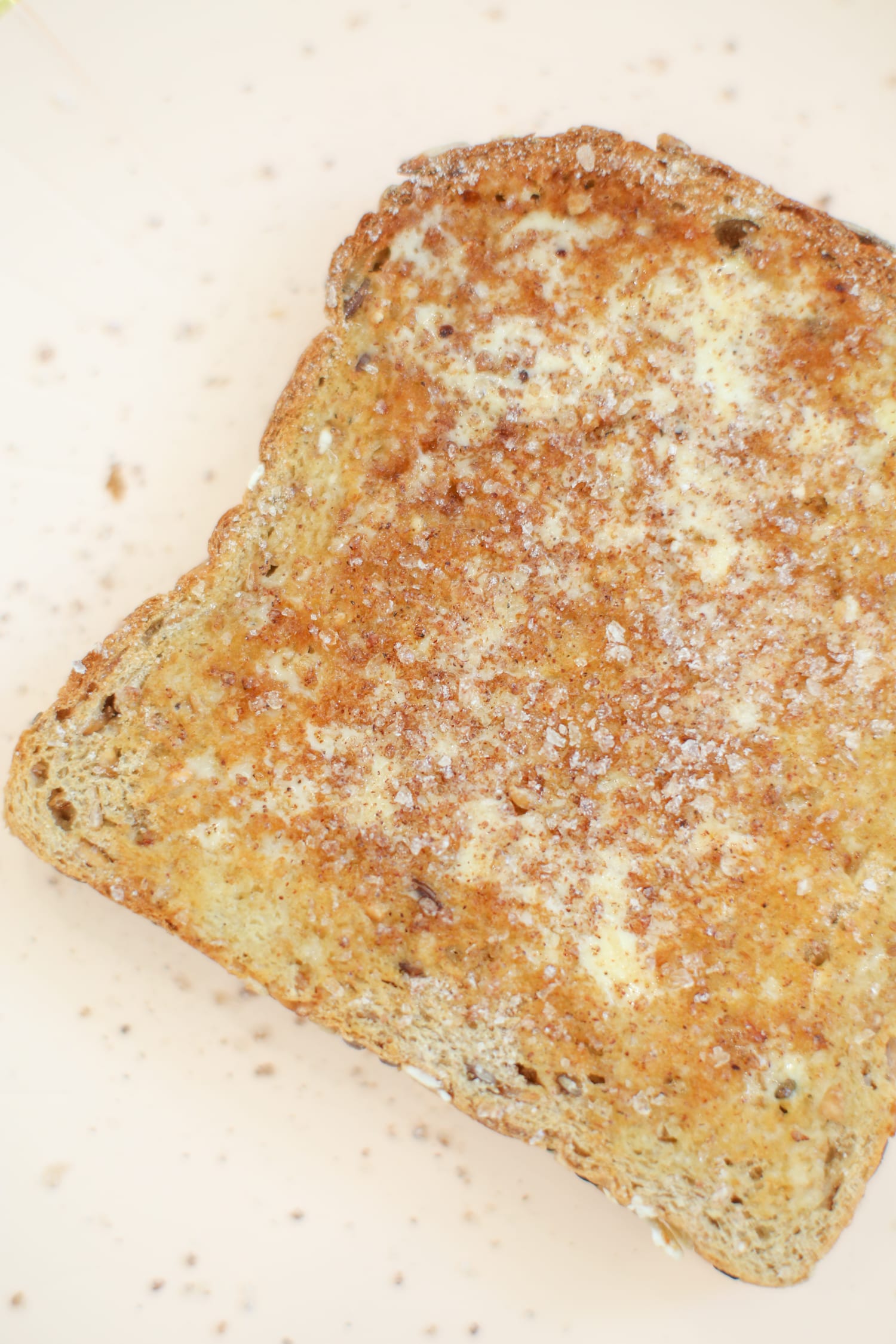 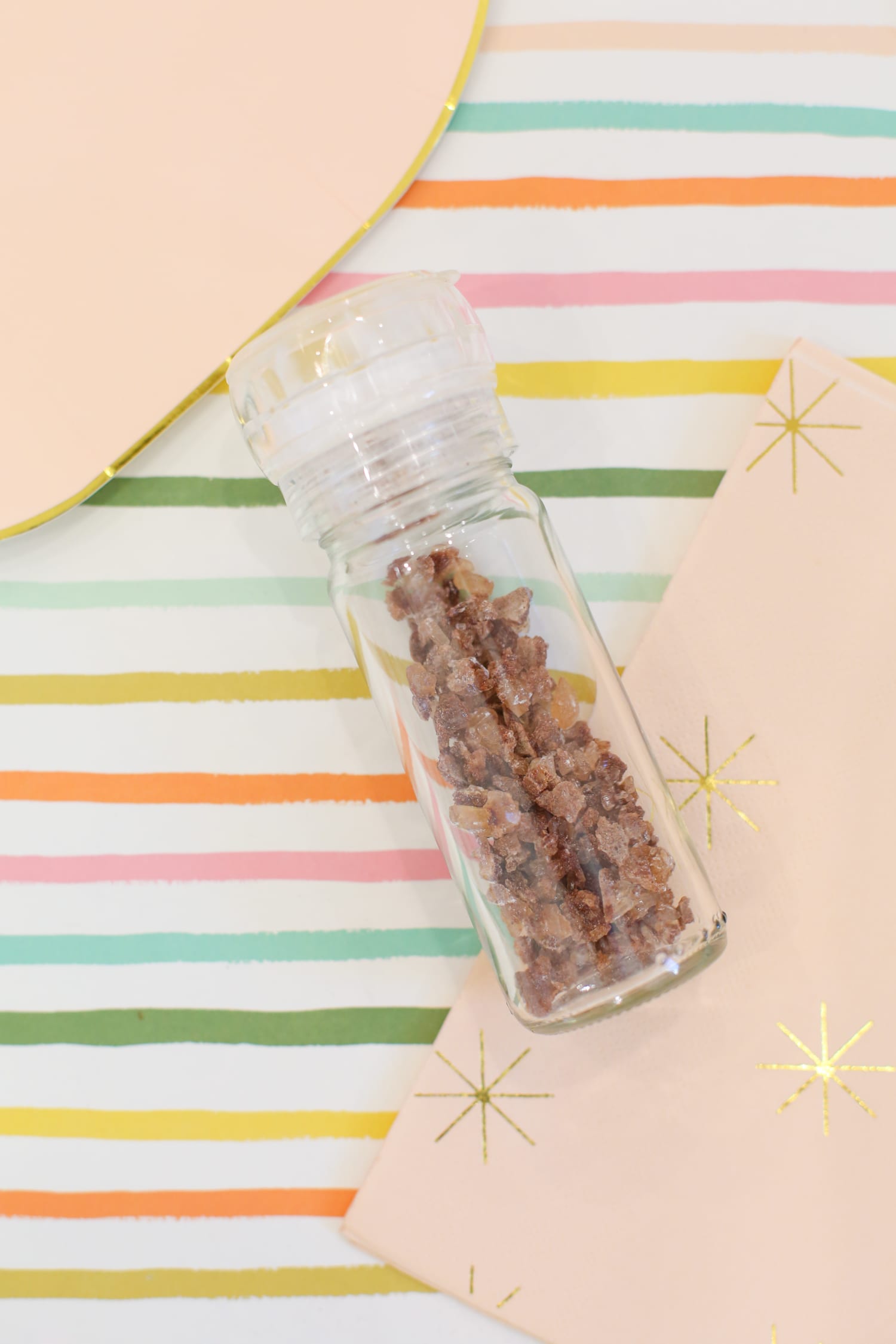 True story, coming at ya. When I was little, we had this shaker that was a mixture of cinnamon and white sugar. Every so often, as kind of a treat, my mom would let us have cinnamon toast for breakfast. She would butter the bread and let us shake our own cinnamon over it. Cut to me, trying to make my own cinnamon toast in high school one day after the shaker had run dry. I found a little tin of cinnamon in the spice cabinet and shook it out over my buttered toast. Took a bite and it was like me doing the cinnamon challenge before YouTube even existed. I had NO IDEA what real cinnamon was like when it wasn’t cut with sugar. I fully thought that the mixture in our little shaker was just normal cinnamon. And this is why I don’t cook, guys.

So fast forward another few years and here I am, letting my own kids have cinnamon toast every so often as a treat for breakfast. We found a cinnamon sugar grinder at Trader Joe’s, and it makes really great cinnamon toast. Henry loves to grind it himself. But the crystals recently ran out, and I started wondering if I could just make my own! We didn’t need to buy a whole new grinder, and refilling it would be simple and free (since all you need is cinnamon, sugar, and water). So we tried it, and it worked, and it makes the BEST cinnamon toast ever.

Make Time: 15 Minutes, plus one week for sugar to crystallize

Step 1:  Start heating 1 cup of water in a pot over medium heat. Add 3 cups of sugar and turn the heat to high.

Step 2: Continue heating the sugar until it dissolves completely, stirring frequently. As soon as sugar is dissolved, whisk in cinnamon until completely incorporated.

Step 3: Continue heating until mixture comes to a boil. Remove from heat.

Step 4: Pour into a glass jar, using a funnel if necessary.

Step 5: Tie a length of twine to the center of a pencil. Trim the twine so that it can hang down inside the jar without touching the bottom. Wet the twine slightly to get it to submerge beneath the liquid mixture. Suspend the twine in the jar by laying the pencil across the jar’s opening.

Step 6: Place the jar in a cool, dry place and leave for about a week, as the sugar crystals form. Once the crystals have formed, break them off of the twine and the jar. Let sit a day or so to dry.

Step 7: Place crystals on a baking sheet in the oven on 200 for 20-30 minutes to dry them out completely. Here’s a shot of our dried crystals (the same crystals, near and far). Our largest crystal was about an inch across. 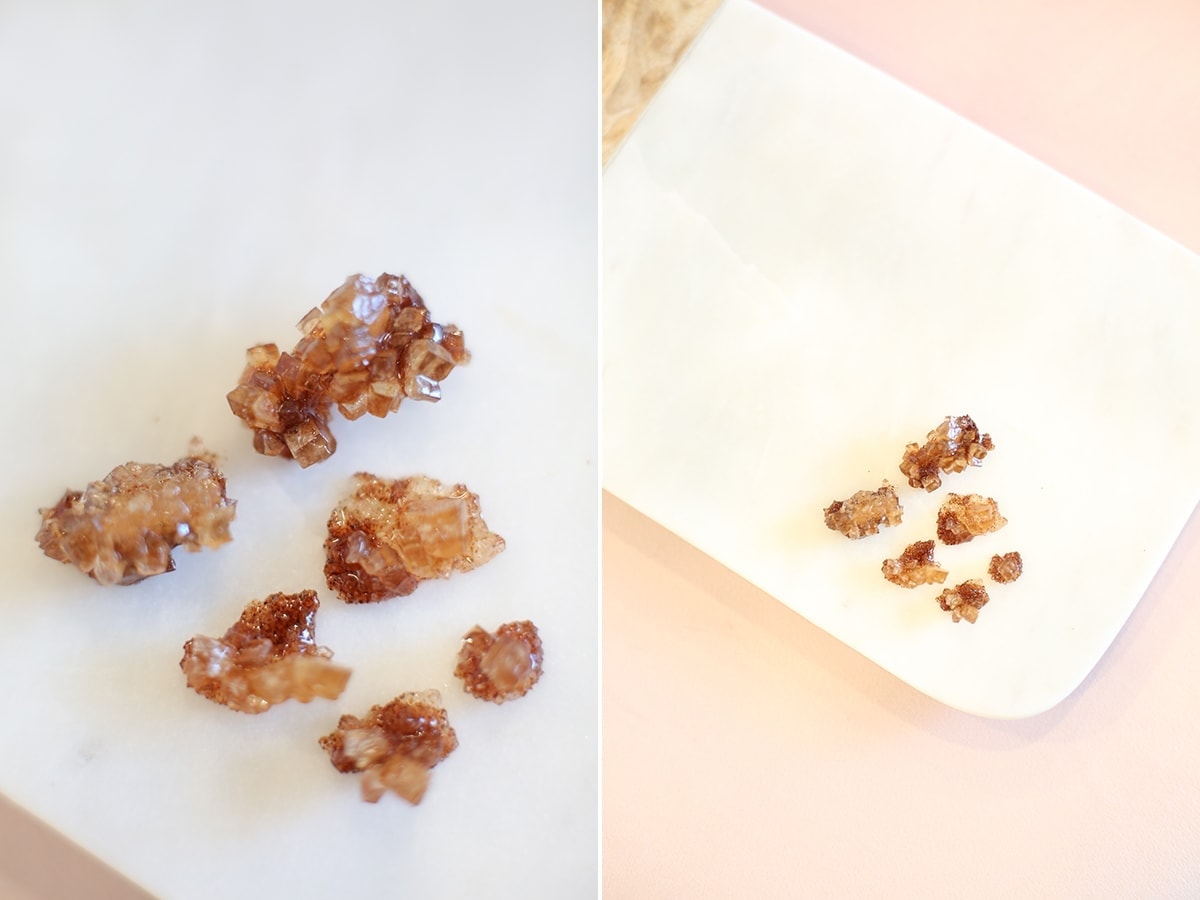 Step 8: If necessary, break the crystals down a little further to get them to fit into your grinder. We put ours in a plastic baggie and tapped them lightly with a small hammer.

To make your cinnamon toast, toast your bread and spread butter lightly over the surface while the bread is still warm. Then grind your cinnamon-sugar crystals over the butter and enjoy! It’s such a special treat, especially on cozy winter mornings. And with the crystals coming from the grinder, you get a fun little crunch on top of the toast that you just can’t replicate any other way.

In other news, how pretty are those peachy-golden plates and napkins?! They’re from our girl Ashley’s new Sugar & Cloth entertaining collection

!!! Swing by and see all of her goodies — I dare you not to want them all. 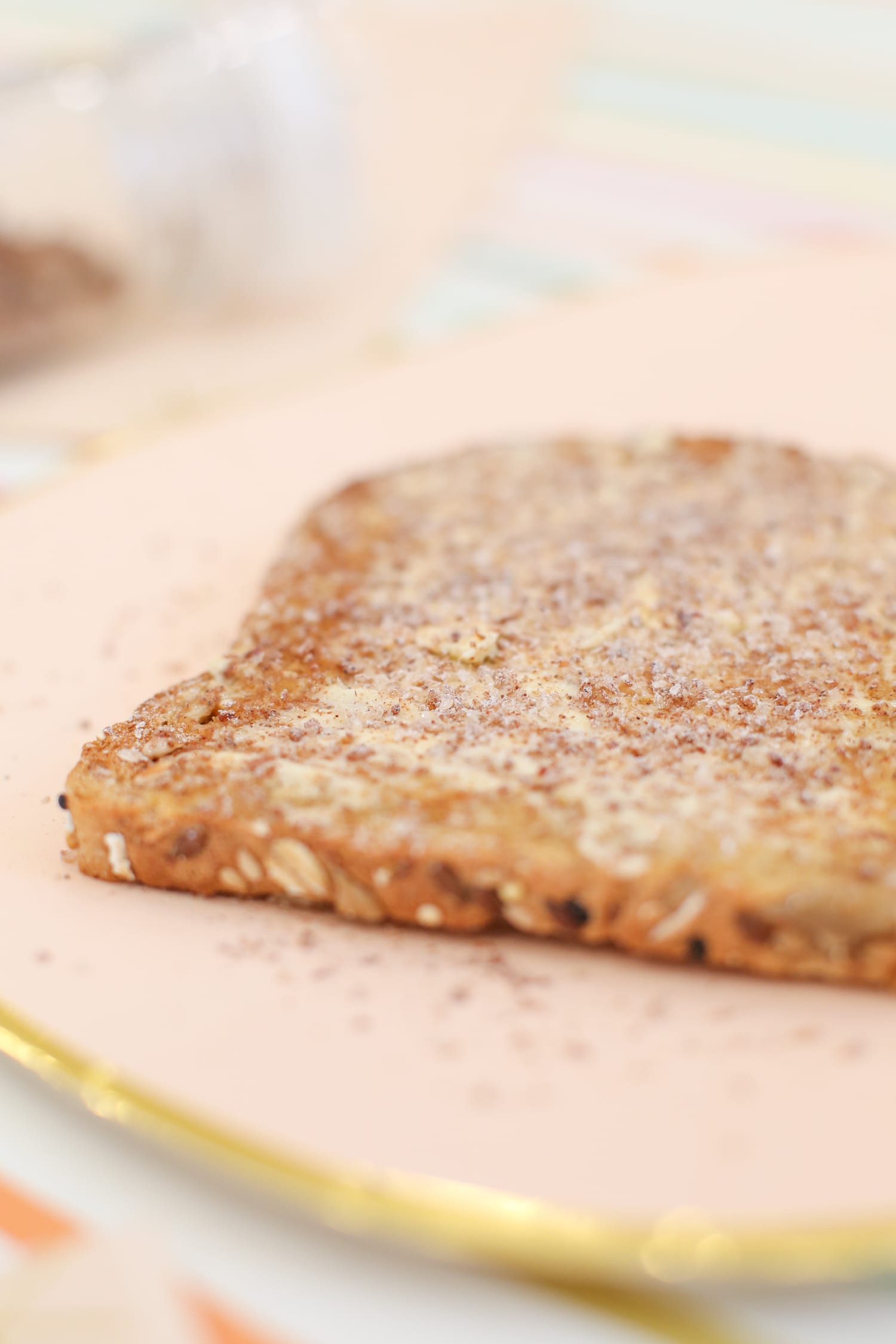 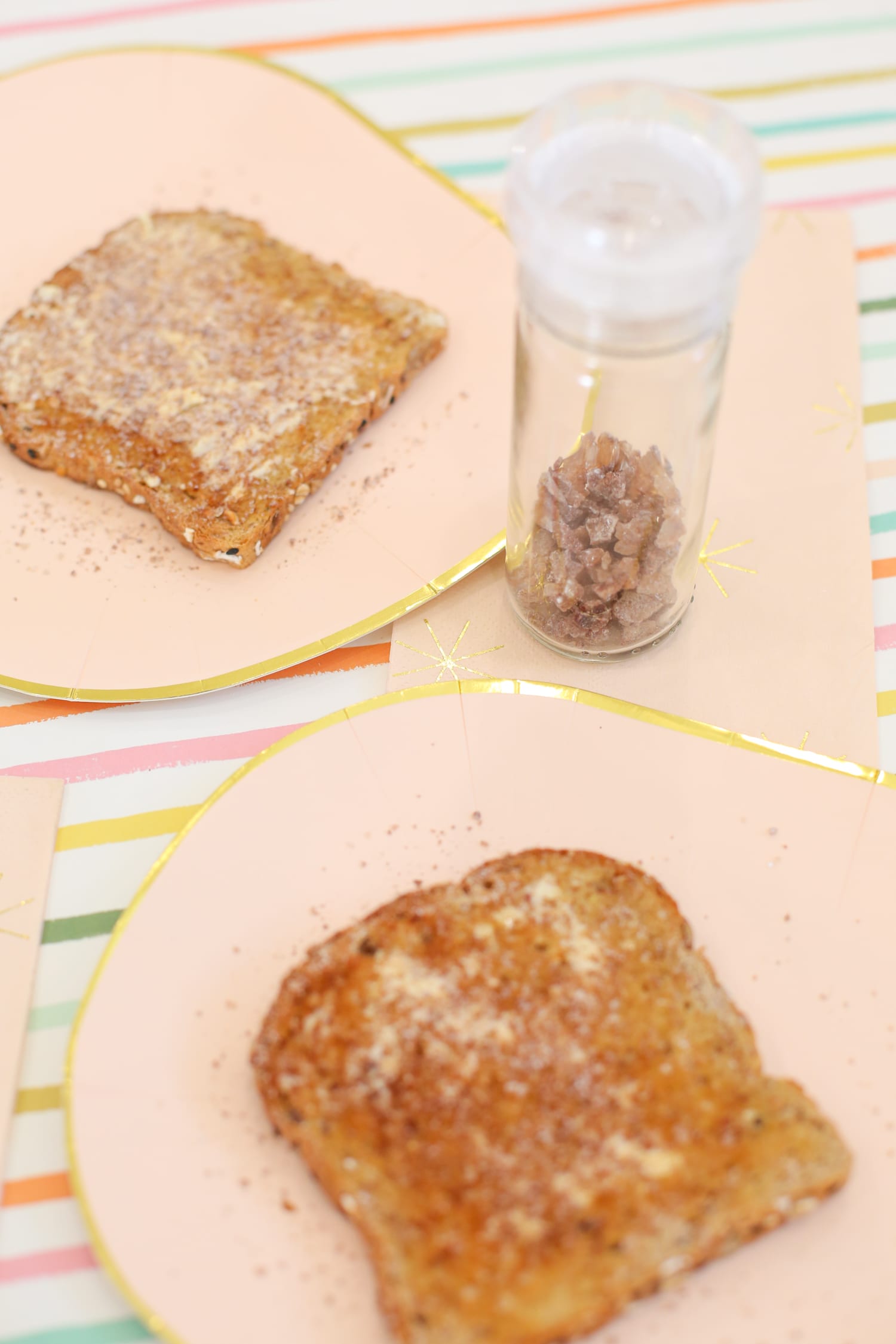 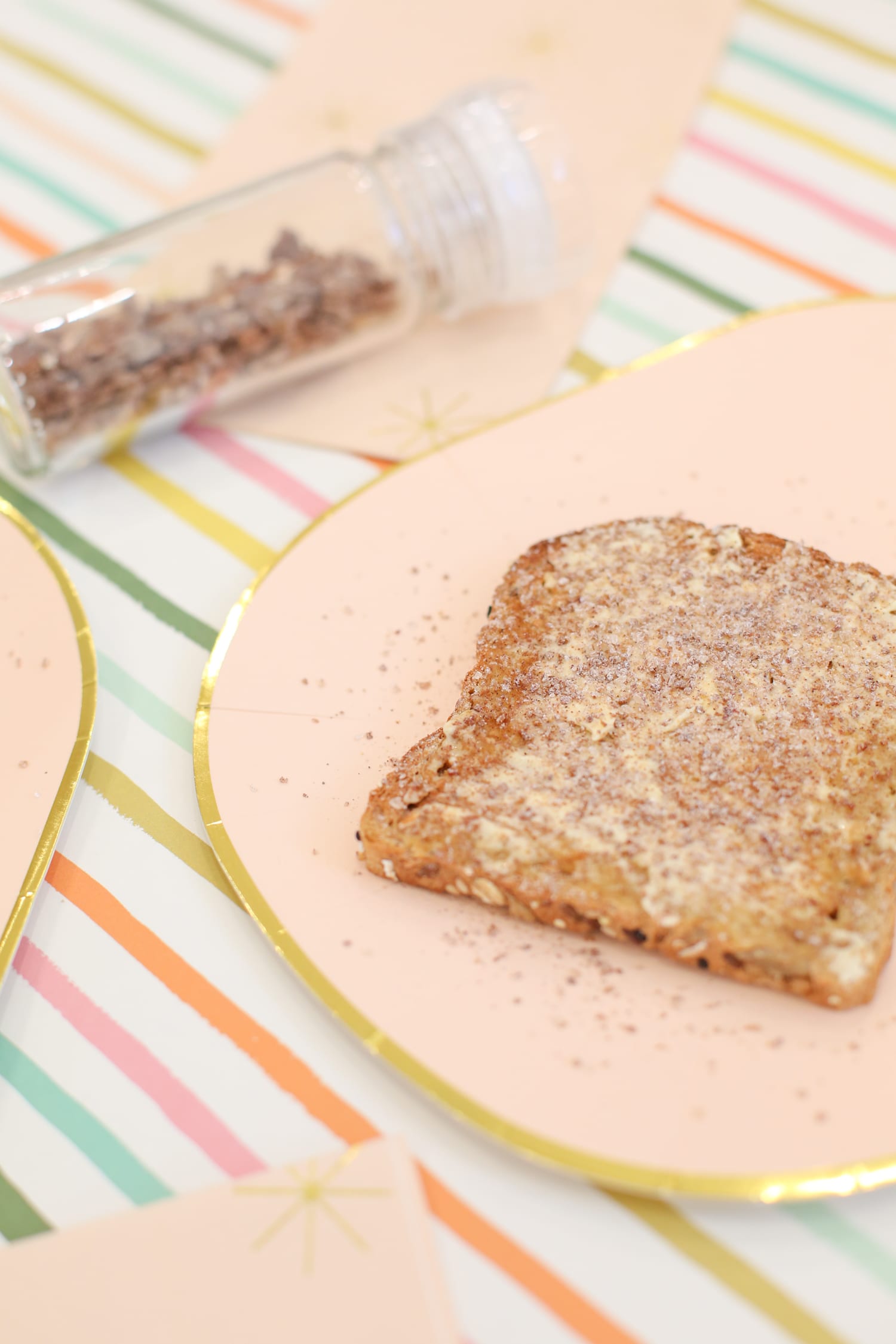