Remember when we were Star Wars for Halloween last year?! There isn’t much else that I love more than a family Halloween costume, and I’m so pumped that the kids are into the idea again this year. We’re keeping this years’ costume under wraps until October 31st, but today I’m sharing how we put together our family Star Wars Halloween costume from last year! We found almost everything we needed right in our closets, with the exception of a few key pieces (hello, lightsaber!) that we purchased. Read on for a complete breakdown of each character, with links to any specific items we used, and how to make a family Star Wars costume for Halloween! 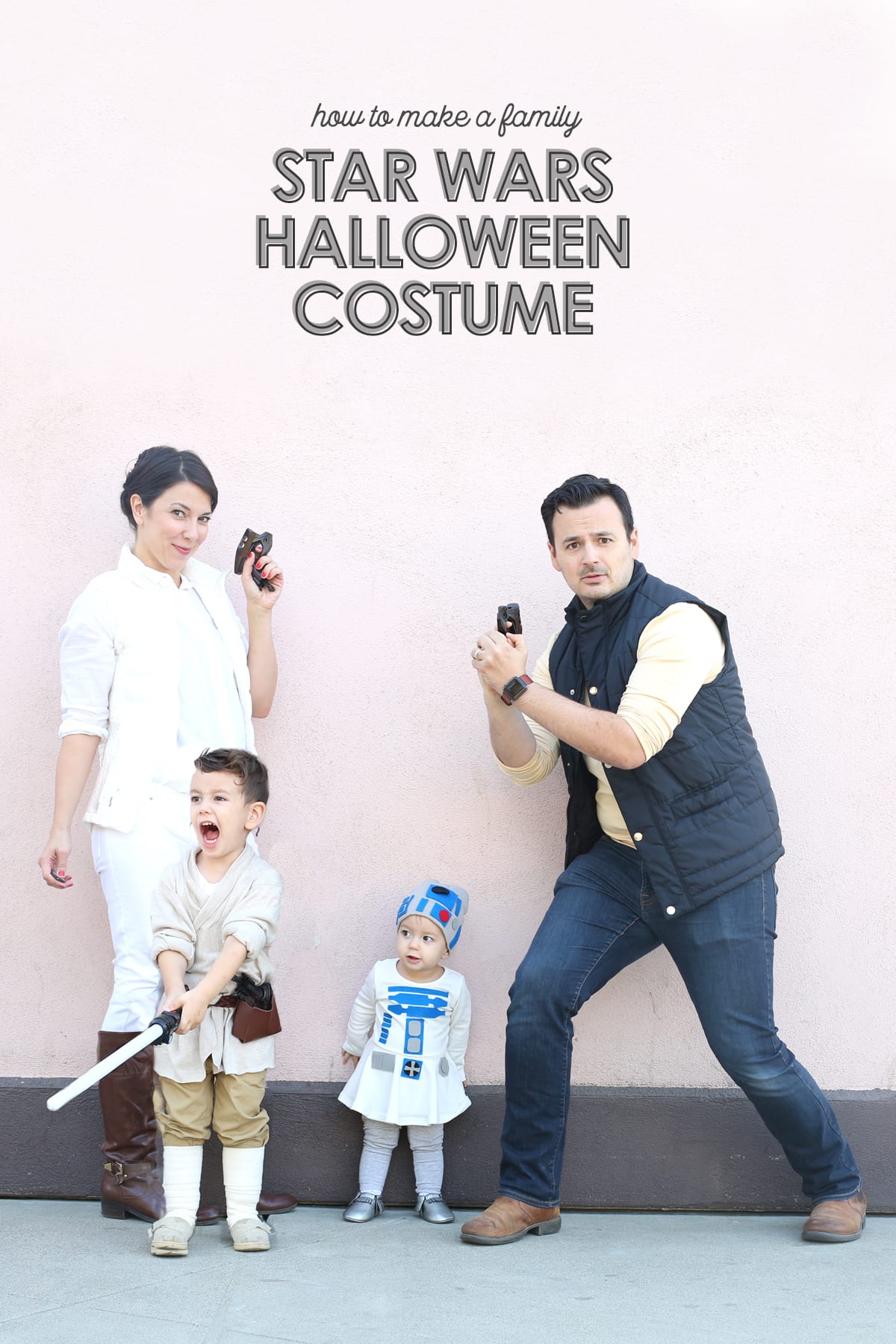 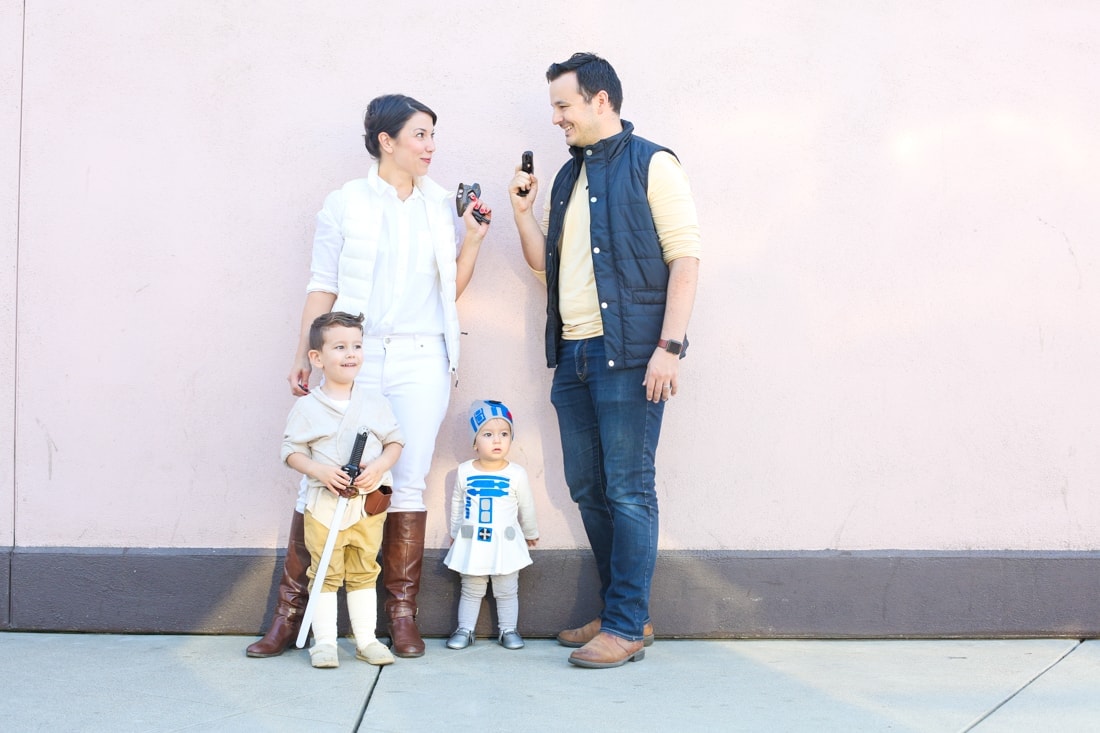 A note about how we do Halloween costumes for our family! I like to make sure that everything is as cost-effective as possible, so whenever I can I use what we have. Otherwise, I try to purchase pieces that we can then use in daily life, like the pants that we got for Henry’s Luke Skywalker costume. I try to limit purchases of pieces that we’ll never use again. So hopefully you can scour your closet (or at least a thrift store!) for most of this stuff.

How to Make a Family Star Wars Costume for Halloween

It was Henry’s idea to be Star Wars, and a year later he’s still obsessed. We have the Star Wars Little Golden Books

and we read them all. the. time. So he decided who would be who, and obviously chose Luke for himself. This one is so simple. A white t-shirt, an oversized beige cardigan for the jedi robe (the cardigan was an old one of mine), a woven belt (also mine), some skinny khakis, a couple of Ace bandages wrapped around the lower half of the legs, and some tan shoes (we used some slip-on Toms that Henry already had. Add a lightsaber and DONE! (A note on the lightsaber: we found one for $5 at Walmart, but I couldn’t relocate it to share here. The closest thing I could find is linked below!) We also had at one point made a little holster to hold an extra blaster that attached to his belt, but it didn’t work too well so at some point in the day we just removed it. Go for it if you think your kiddo needs the holster! See the shoppable list below. 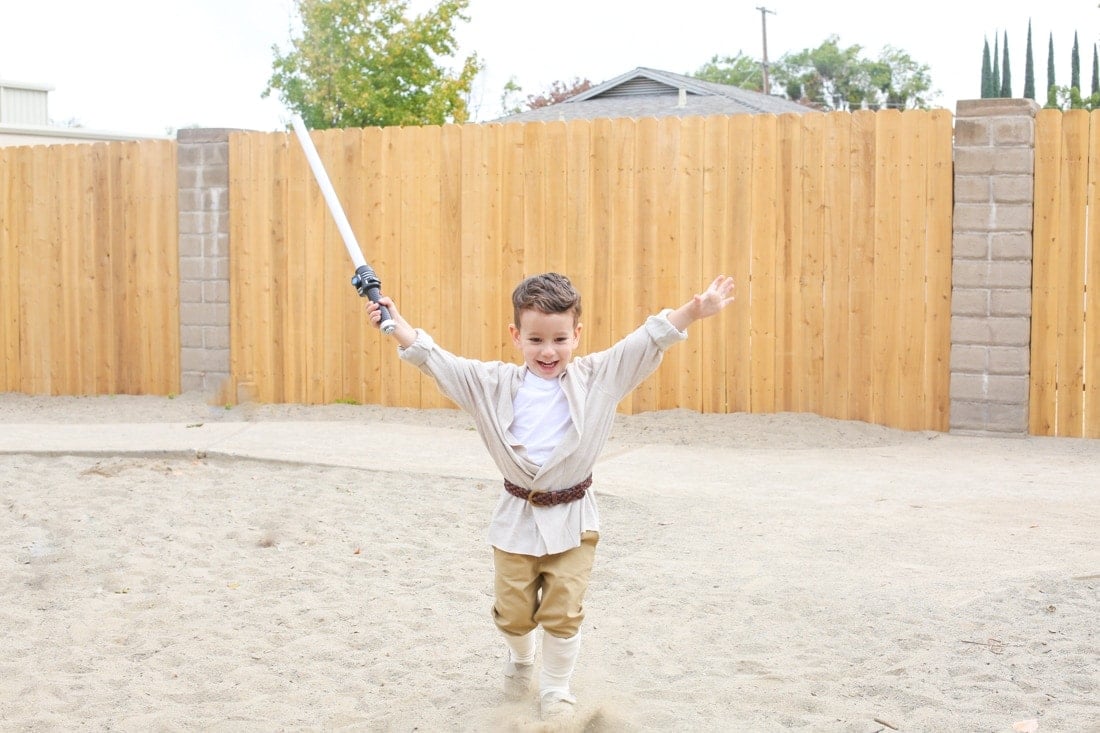 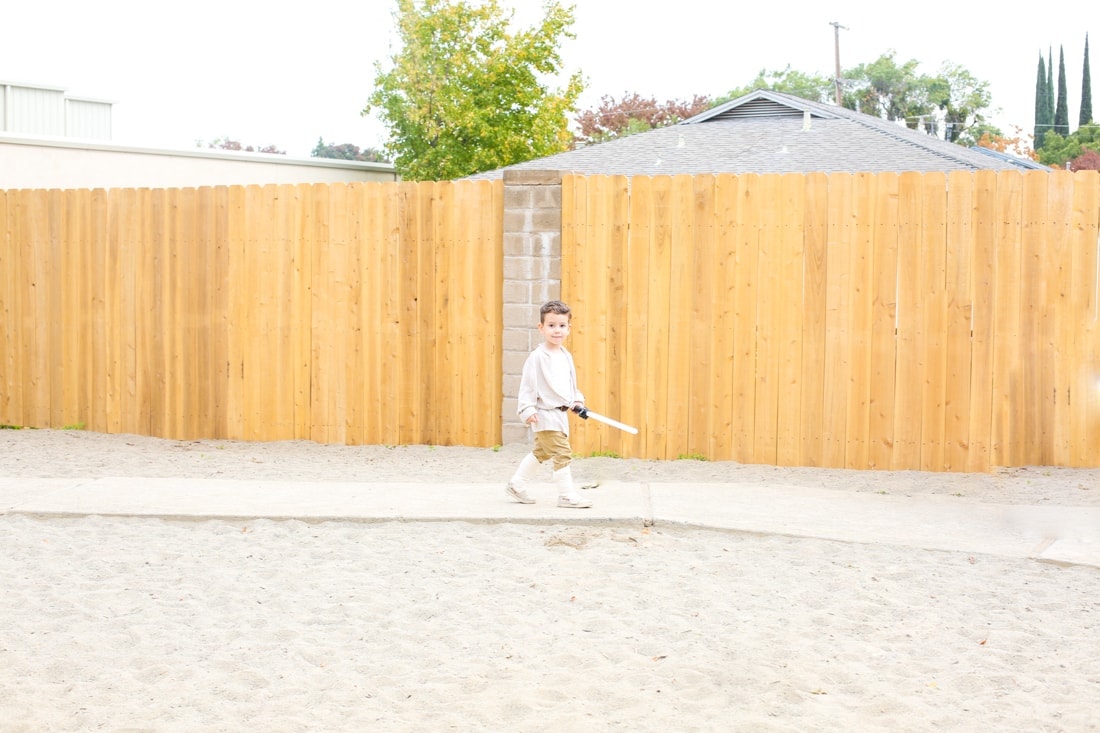 I was MOST excited about this one, because it involved a little bit of DIY! It was pretty much just cutting felt and glueing it on the beanie and dress, but still. It was fun to put together. I don’t have a pattern for the pieces we glued on to Maggie’s R2-D2 costume, but just zoom in on the photos and you should be able to recreate it. For Mags, we used a little white dress, gray leggings, silver moccasins, and a gray beanie, with felt applied in blue, gray, red, and black. I didn’t measure or trace anything for the shapes we glued; it was all eyeballed. I used E6000

to glue on all the pieces. See below for shoppable links. 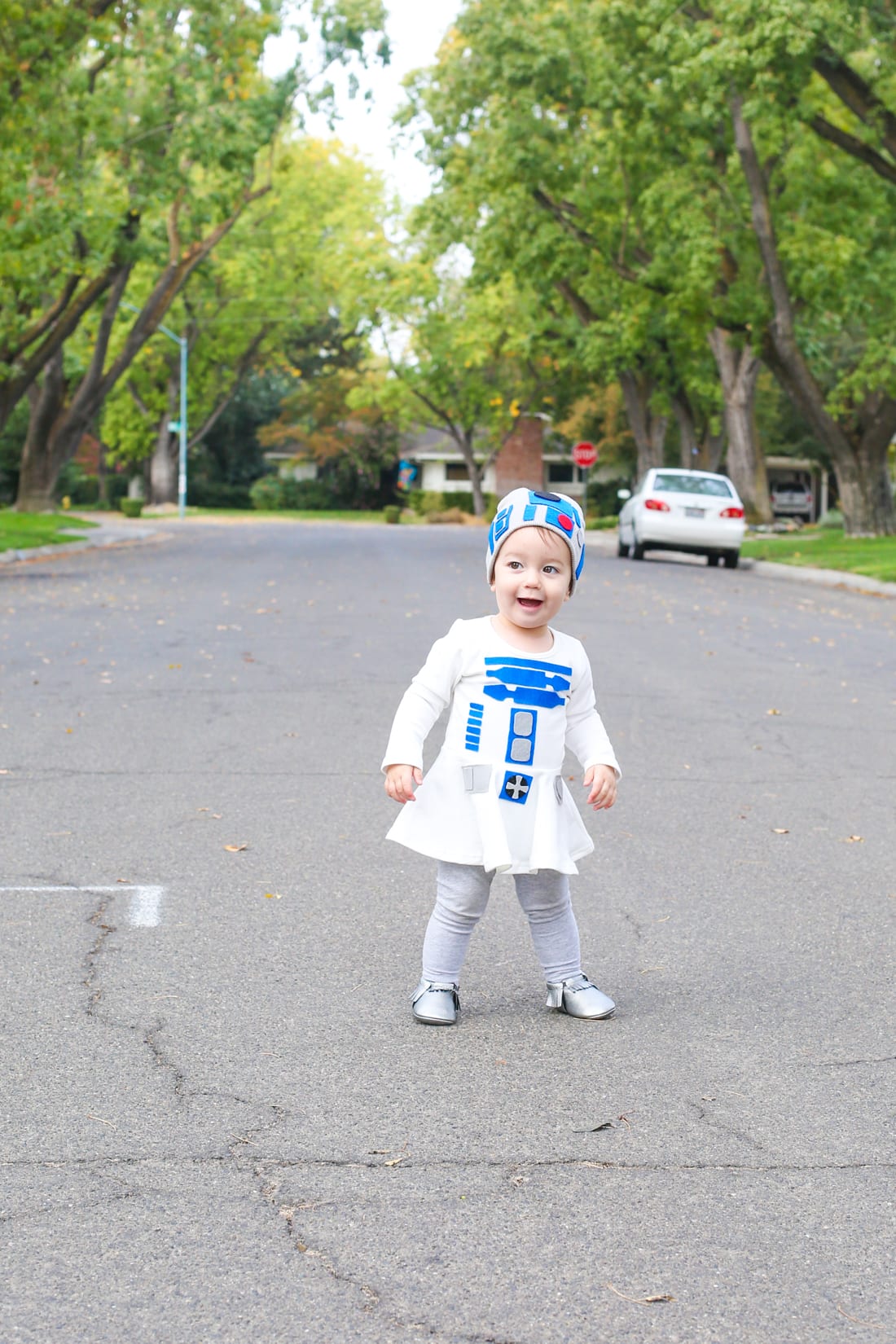 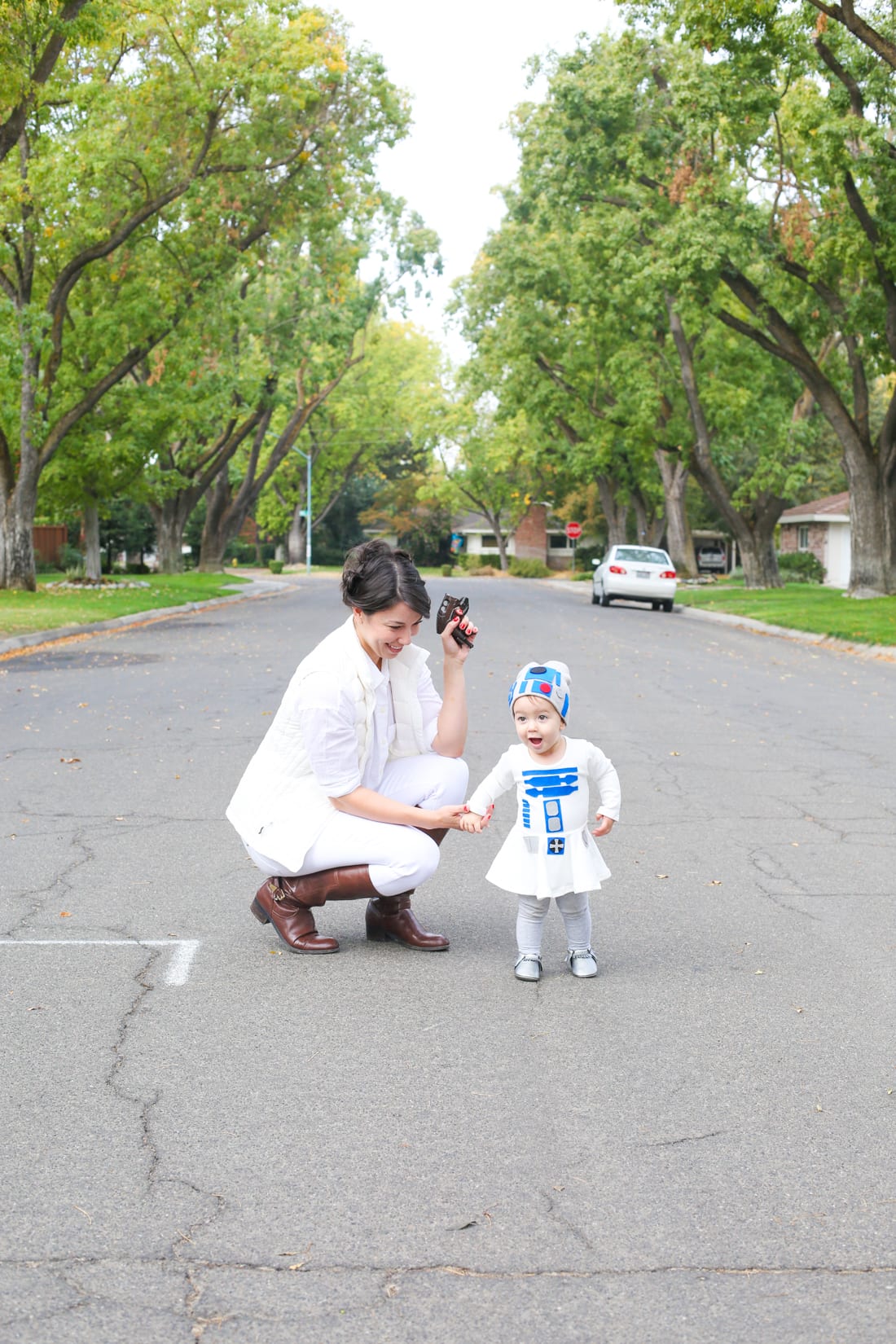 We decided to go with the looks from Empire Strikes Back for all the characters because they were the most easily replicated. So for my Leia, I used a white button up shirt, a white down vest, white jeans, and brown boots. I did milkmaid braids in my hair and we got little fake blasters from the dollar store, which I painted a rust color. If you’re carrying a blaster, make sure that it doesn’t actually look like a real gun. (I get kind of twitchy about that.) We searched for ones that looked as futuristic as possible, so they definitely looked like toys. See below for shoppable links. 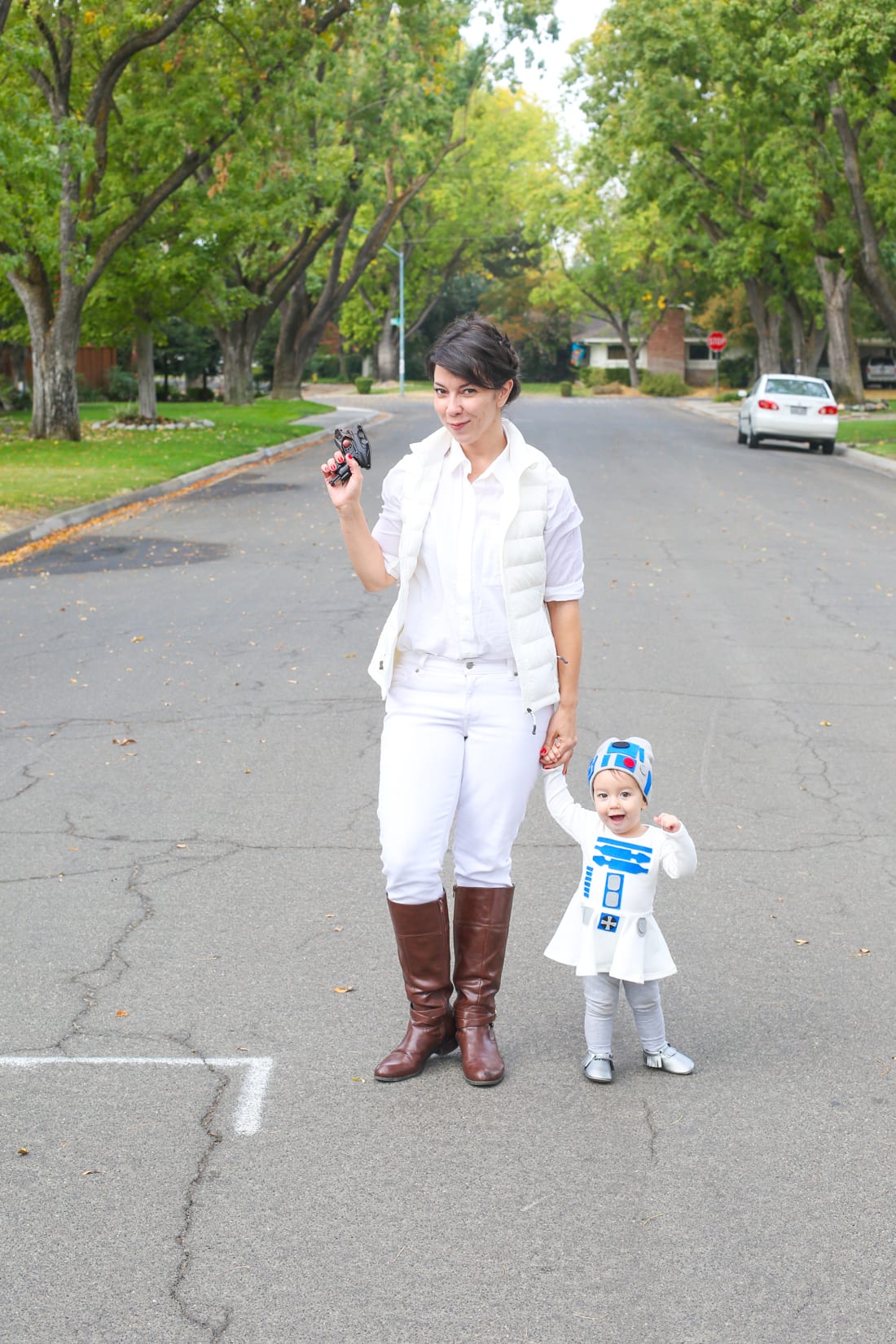 Admittedly, Ryan’s Han Solo costume is probably the most low-key of the bunch. We initially were going to make him the little hip holster that Han carries and eventually just ran out of time. So this one is pretty basic! Tan henley shirt, black vest, dark pants or jeans, and a blaster like the one above. Done. See below for shoppable links. 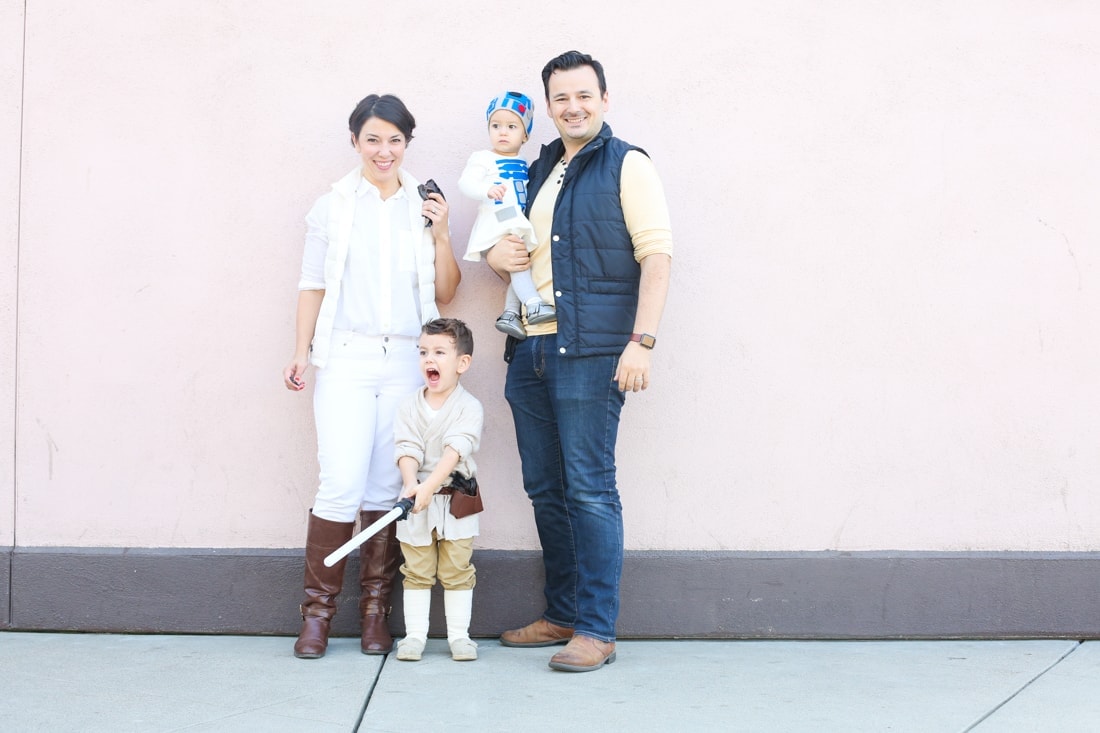 We had SO MUCH FUN. I just will never get over the family costume thing. There are families in our neighborhood with kids in high school who still do it and every time I see them I’m like GOALS! So we’ll see how long it lasts. And stay tuned on our Instagram feed to see what we’re going to be this year! xoxo