Around the time that I was making my 30 by 30 list, I was totally enamored of this shower curtain.  I must have been feeling ambitious, because I put it on my list to make myself one (instead of marching out to Anthropologie and buying one like all the sane people).  I kept putting it off and completing other things on the list first, mostly because I didn’t really know how to approach it, being pretty much a novice seamstress.  But it couldn’t wait any longer (I was tired of showering behind a sad shower liner with no curtain), so off I blindly went into the world of ruffles.

I originally had thought I was going to hand-dye the fabric to create the gradient color, but I let go of that idea real fast when I found this fabric from eQuilter.  It was already striped with a pretty awesome color spectrum, ranging from a pale lime color, to deep avocado.

I got some raw muslin in a neutral shade to use as a backing, and started going to town.  Each ruffle needed about twice the width of the curtain (which is six feet wide) to create the fullness I wanted, and I ended up using eleven ruffles.  You do the math — it was a lot of sewing and ruffling.  True story:  I was sewing one day and got into a total groove — I just kept going and going and going.  I didn’t realize it, but my sewing machine was vibrating a shelf on which there were a couple of picture frames.  All of a sudden, the frames came crashing down on my head.  I was fine, just surprised.  Until I looked out the window and realized that my neighbor had witnessed the whole thing.  Then I was surprised and embarrassed.

Anyhoo, after lots of trial and tribulation and ripping out of stitches, I did it!  I’m sort of shocked that it actually happened, to be honest!  It was certainly a labor of love — so much so that I almost see it as more of an art piece than a shower curtain…  Is that weird? 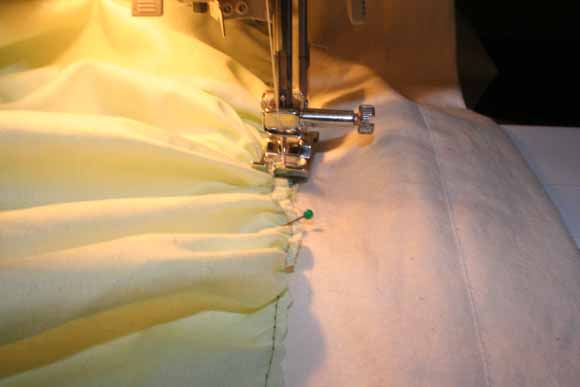 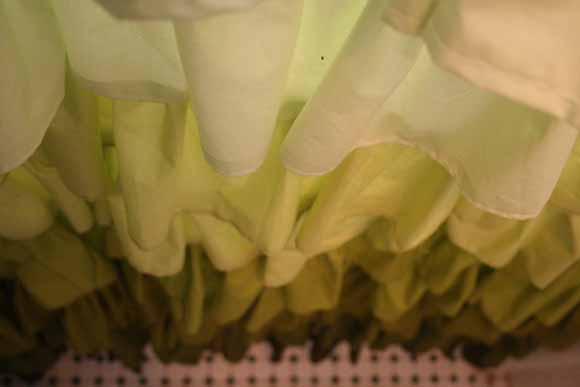 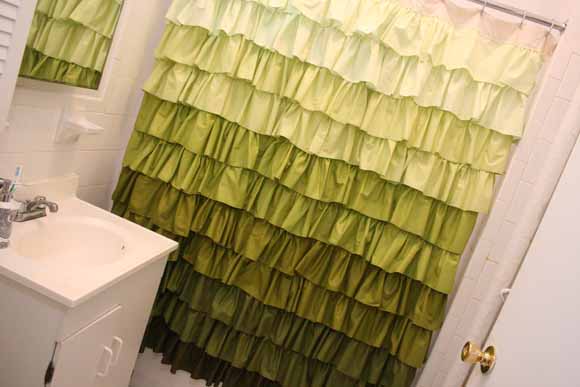 And there she is, in all her glory!  I think it looks like seaweed, so I’m taking the bathroom in a mermaid direction and hoping Mr. Lovely either doesn’t notice or doesn’t mind.  😉

And, hey!  Don’t forget that the Keep Calm Print Giveaway ends TODAY!  Make sure to get your entries in, as we’ll be announcing the winner tomorrow.  I’m so excited!  Have a great week, lovelies.  xoxo