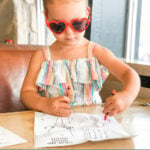 Dealing with kid tantrums while dining out is no joke! Read all of our tips and tricks for avoiding or stopping tantrums in restaurants.

I love to talk about parenting stuff. Really, I do! I just love the relationship between parents and children, and families of all types. And I have so much respect for both parents and kids — particularly kids, really. They’re awesome and intriguing and totally mysterious. I love trying to figure them out. So when someone asked about how we deal with kid tantrums while dining out, I was really excited to tackle it here on the blog.

Dealing with Kid Tantrums While Dining Out

It’s no secret that we love to take our kids along with us on adventures. We fly with them, we take them to the theatre, to nice restaurants, and to lots of places that people probably think we are crazy for. Why? Because we straight up like to hang out with them! But. I really do believe that because we’ve been doing that stuff with them since they were little, it has become second nature for both them and us and is a lot easier in the long run.

Hear this, though: not every outing is successful. Sometimes kids are kids and things just don’t go as planned — you can’t control every emotion or every moment. But there are definitely tricks that we keep up our sleeves to mitigate fallout and help when dealing with kid tantrums while dining out.

Prevention is Easier than Cure

My number one takeaway from all of the times that we’ve taken our kiddos out to restaurants is that preparation is key. It’s so much easier to head off potential problems at the pass than to let a kid get into the tantrum zone and try to bring him back.

So to that end, try to identify what it is that sets your kiddo off — maybe it’s hunger, or boredom, or feeling ignored. But whatever it is that usually gets them upset in a dining out situation, see if you can figure it out and lay some groundwork to try to avoid it.

Be real with your kids! If you want to go out to eat with them, talk to them about it first. We try to tell them about the place, what to expect from the menu, what kind of behavior we’d love to see, and we answer any questions they might have.

Last new years eve, we were invited to another family’s dinner at a super fancy restaurant, and the kids were invited too. We shared with them ahead of time that this dinner was really important to the other family, and that the place would probably be really nice, and that it wasn’t the kind of restaurant where you can get up and walk around. We asked them to make sure they used their best manners, etc etc. The dinner wasn’t perfect but they definitely tempered themselves as best as they could (for a 5 and a 3 year old).

This trick might not work perfectly the first or the fifth or even the tenth time, but if you keep using it, I think you’ll start to see your kids get better at reading the room when they’re eating out.

Pack a Bag of Tricks

I never go to what I think will be a lengthy meal without what I call a “bag of tricks.” It’s basically a little zipper pouch packed with small, low-maintenance activities that kids can do at a dining table to stay entertained.

Here are a few examples of what I keep in my bag of tricks:

I try to rotate those in and out of my bag so the kids never really know what I’m going to pull out for them to do. I also always try to make sure the toys are open-ended to encourage creative play, even on a small scale.

How To use a Bag of Tricks

Here’s the thing about a bag of tricks, though. You can’t bust it out right when you sit down and burn through it in the first 15 minutes. (Been there, done that, and was totally sorry about it.)

When we sit down at a restaurant, I always try to engage the kids in some conversation first. Share something about our day, look around the restaurant and notice things, talk about the menu, whatever. We all decide what we’re going to eat. And I try to stretch this all the way until we order. Then, after we order, I think it’s totally fair game to bring out the bag of tricks. Most of the time our kids can wait that long. If not, we fudge it and get the activities out a little earlier.

I think holding off on the activities a bit just helps them learn to socialize and to delay that instant gratification a bit. Also, I just like to chat. 🙂

This has been especially true for us in two situations. Firstly, when our kids were around 1 and not able to eat much off of the menu. So we would bring puffs or baby crackers and let them munch on those while the food came, or in addition to whatever their meal was.

And secondly, when were eating at a place with a menu that doesn’t have any of the veggies on it that they tend to like. I’ve been known to bring a little container of peas or broccoli or bell peppers — any of the veggies that my kids will eat, just to avoid a meltdown at us asking them to eat mushrooms or onions or something that’s on the menu. We’ll give them some veggies as an appetizer or with their meal in this situation.

Usually, we really try to encourage them to try new things and eat from the menu, but sometimes you just want to avoid a showdown and get your kids the nutrition that they need.

Include Them in the Convo

When we take our kids out to eat with us, we don’t necessarily look at it as a time for grownup-only socialization. So we don’t feel that pull to keep the kids occupied so that we can have an “adult conversation.” In fact, it’s kind of the opposite — we try our best to have conversations that we can all participate in, to help them not only learn good social skills, but also to keep them from getting bored.

When a Tantrum Actually Happens

Full disclosure: we haven’t had many full-blown tantrums while dining out with the kids. The ones we have had where when they were pretty little, like under 18 months or so. And in that case, it’s nearly impossible to logic with a kiddo that small, so it’s all about damage control.

Our first step was always just to get the kid outside, both to make sure that we didn’t harsh the vibe for other people in the restaurant, and to remove the kid from the situation. Our children have always responded really well with redirection. So whatever was going on, we’d get the kid outside, take a short walk, get him interested in something else. Kind of like pressing a reset button. We’d talk a little bit in very basic terms about being ready to go back in and try again. Sometimes that’s the best you can do.

Here’s another controversial point, which I feel like you have to at least address in any conversation about dining out with kids these days. Any time we’re out at a restaurant and we see a kiddo at another table with a phone or a tablet, I truly have no feeling about it. No judgement, I don’t care.

That being said, it’s not a choice that we make for our kids. I can count the number of times that we’ve let our kids play on our phones at the table on one hand. And each of those times was an extenuating circumstance where we weren’t really prepared for a meal out with them.

Dining Out with Kids

So that’s what we do! Every family and every kid is different, but this is what has worked for us. If you feel like dining out with your kids is scary or totally insurmountable, start with a more low-key place and try some of our tricks. Easier restaurants like order-at-the-counter places are an awesome place to try out some new ideas. Hope some of our tips help you out! xoxo