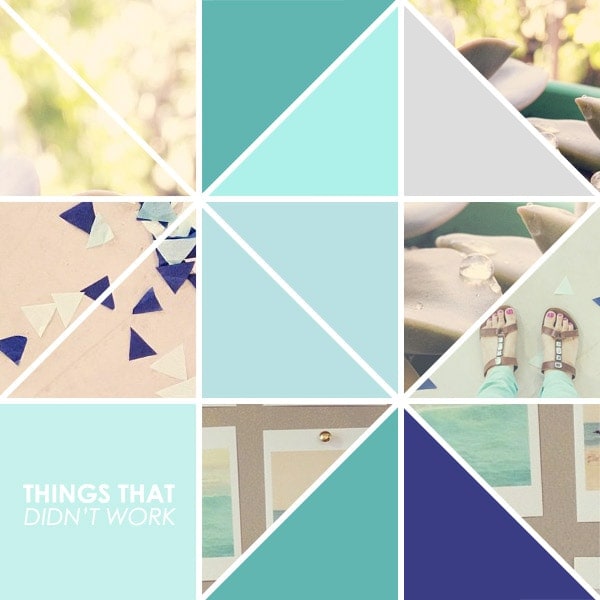 You might remember this post about the things I’ve done on my blogging path that have really helped to up my game and grow Lovely Indeed. Well, there are also a few things that I’ve tried along the way that were dismal failures. Things that I was really excited about, or thought would get a great response, or bring lots of traffic, and that just… didn’t.

Well, it’s just as important to learn from our failures as it is from our successes, right? So in that spirit, here’s a (totally incomplete) lists of things I’ve tried that were barely even blips on the radar.

Blogging More. There was a long span (I think close to a year!) where I was trying to blog more than once a day. The second post was usually a photo I liked, or a color palette, or something similar. But really, I didn’t have enough time to do it and so it wasn’t quality. I couldn’t keep up with it. Not to mention, the numbers didn’t lie — my readership stayed the same whether I posted the extra blog or not. And when I stopped double posts, my numbers didn’t suffer at all. In fact, they slowly and steadily increased.

More Social Media. I used to go on these frenzies where I would tweet or post to Facebook bunches of times every day, thinking that I needed to be more present there to reach my readers. Again, looking back at that practice, I now realize that quantity does not equal quality. It wasn’t gaining me any followers or readers, and truthfully I find overposting on social media somewhat offputting now. Each person finds their own sweet spot and I totally respect that. But now I go by a simple rule: Do I have something interesting to say? If so, then I say it. Maybe I have two interesting things to say one day and twenty the next. So be it.

Giveaways. My first year, around the holidays I organized a month of giveaways of some pretty cool swag. I loved doing it, but it didn’t change a thing. Readers did not come from far and wide to enter my giveaways. The people entering were the small number of readers that I already had on my blog. Granted, if I had been giving away a car or a trip or something crazy, it could have been a different story. But for me, giveaways are not and have never been a traffic driver. They’re just something fun that I enjoy doing for readers.

Guest Posts (with a caveat). Last time, I mentioned becoming a contributor as something that really paved the way for Lovely Indeed to become what it is today. And I stand by that. But what it didn’t do was bring much traffic to my blog. I remember being kind of bummed about that — I wanted a magical answer to getting more readers and I thought that would be it. People would see that I wrote a post and BOOM they’d come hang out on my blog. I hate to break it to ya, but that’s not how it goes. Guest posting and contributing is awesome, and I love to do it. I still contribute to a few places because I enjoy it and because it can be a source of income as well. It’s also how I made some great connections and got to know some of my best blogger buds. But a magical flowing river of traffic it ain’t.

Being Complacent. Not reaching out and grabbing what I wanted was maybe my biggest mistake. Because if you don’t reach for that big shiny thing in your path, someone else will! And there are a million ways to reach out and grab it — by being present for your readers in the form of comments and prompt emails, by sticking your neck out for a project that seems scary, by trying new things (and maybe failing), and on and on. If something’s not working, try something new. Eventually, one of them will work.

Who else out there has some knowledge for us about what didn’t work? Let’s talk shop — and make some lemons into lemonade. xoxo