Happy Monday, Lovelies!  You’ll be happy to know that our Christmas party this weekend was a smashing success — we’ll do a little recap later this week.  But today, we’re talking about walls.  Between Mr. Lovely and I, we found ourselves with an overabundance of black frames.  Here’s how we decided to remedy that. 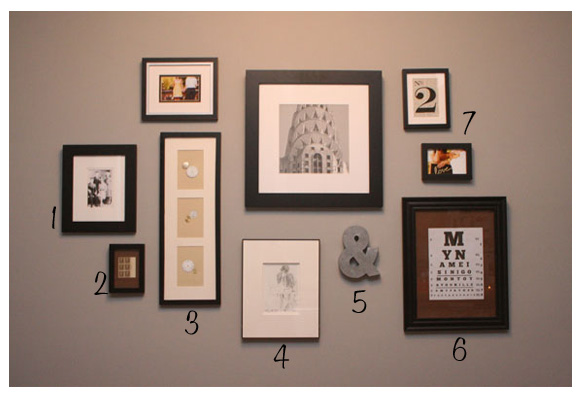 1.  My Grammie and Grandpa’s wedding photo.  My mom dug it out for me after Mr. Lovely proposed.  Grammie and Grandpa are the two that are seated.  Her dress looks really light in this photo, but it’s actually a really lovely lavender-pinky color, and it’s handmade.  I tried it on during my last visit home, and I’m kinda thinking about wearing it at the rehearsal dinner. 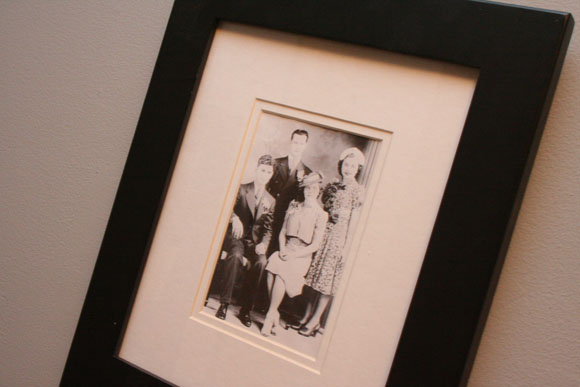 2.  Vintage Nathan Hale postage stamps.  My soon-to-be sister-in-law sent these to us after we moved.  The new building is named after Nathan Hale.  Is that one of the coolest housewarming gifts ever, or what? 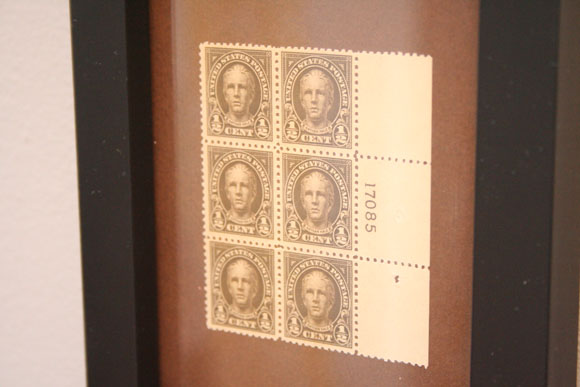 3.  Vintage watch faces.  Mr. Lovely has a serious thing for clocks, and he picked up a handful of these watch faces a few years ago on a tour.  They’ve been kicking around for a while, and we finally figured out what to do with them. 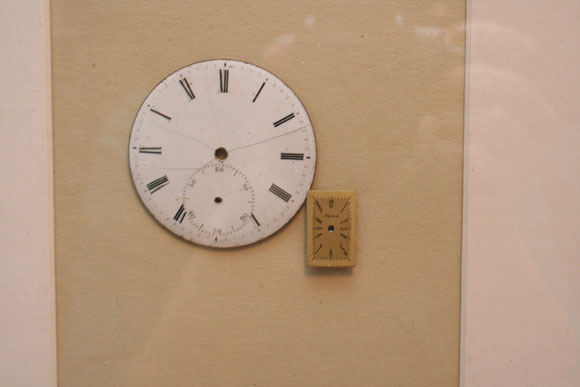 4.  Sketch of yours truly.  A couple of years ago, I was sitting in Starbucks drinking tea and doing a crossword puzzle, and I realized that this man was staring at me.  He wasn’t freaking me out, but he was definitely staring.  All of a sudden he got up and walked out, and on his way, he dropped this sketch on my table.  He had been drawing me.

5.  Anthropologie ampersand.  I’d been eyeing this little guy forever.  I would go into Anthropologie just to stare longingly at it.  I was actually thinking of getting it for Mr. Lovely for Christmas, but he beat me to it when he brought it home the other day as a congratulatory gift for signing my tour contract. 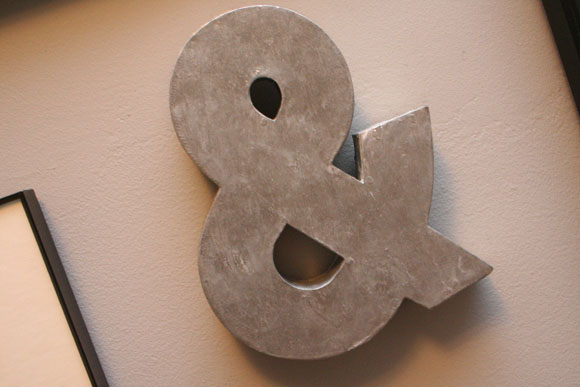 6.  Eye chart art.  I got this idea in my head that I wanted to DIY something to frame that was a play on an eye chart.  I wanted it to say something cool, rather than just be a bunch of letters — something between an inspirational message and an inside joke.  We kicked around a bunch of ideas, until finally Mr. Lovely came up with the winner:  “My name is Inigo Montoya.  You killed my father.  Prepare to die.”  It’s kinda wordy, but it was too good to pass up.  Bonus points if you know where the quote comes from! 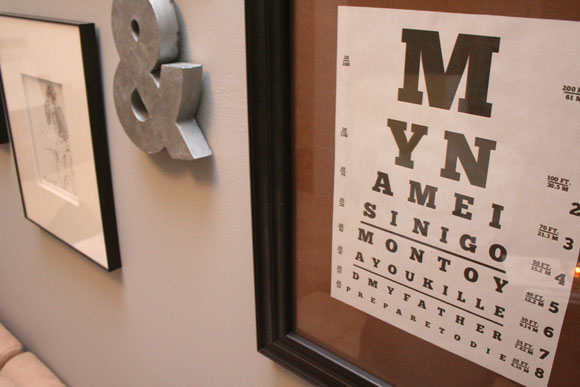 7.  Engagement photo and DIY project.  We framed two of our engagment photos, to get a little color into the mix (and because they’re the best photos in the whole world).  And you might remember the DIY table number that I made for Ruffled’s DIY contest — I liked it too much to get rid of it. 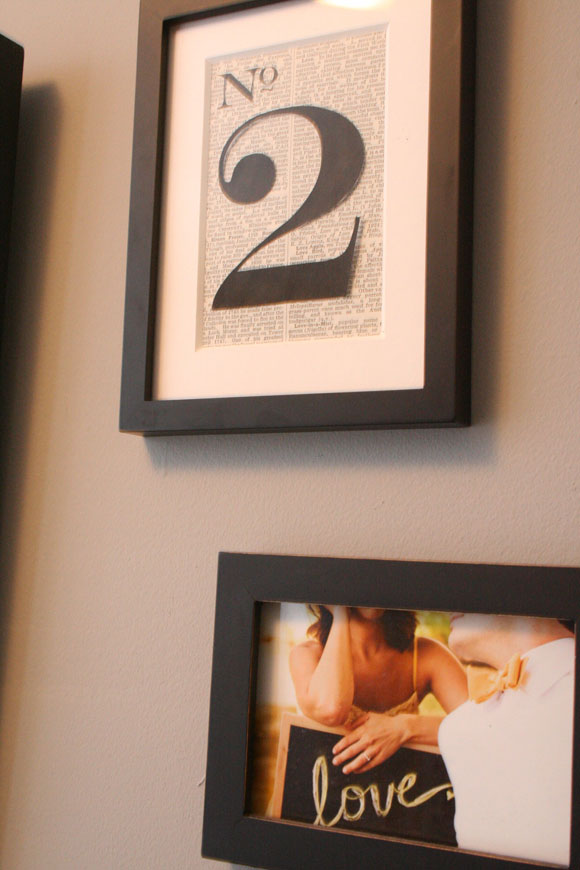 Voila!  There you go.  Hopefully there will be more to come.  I consider it a work in progress — there’s a lot of space on that wall.  xoxo 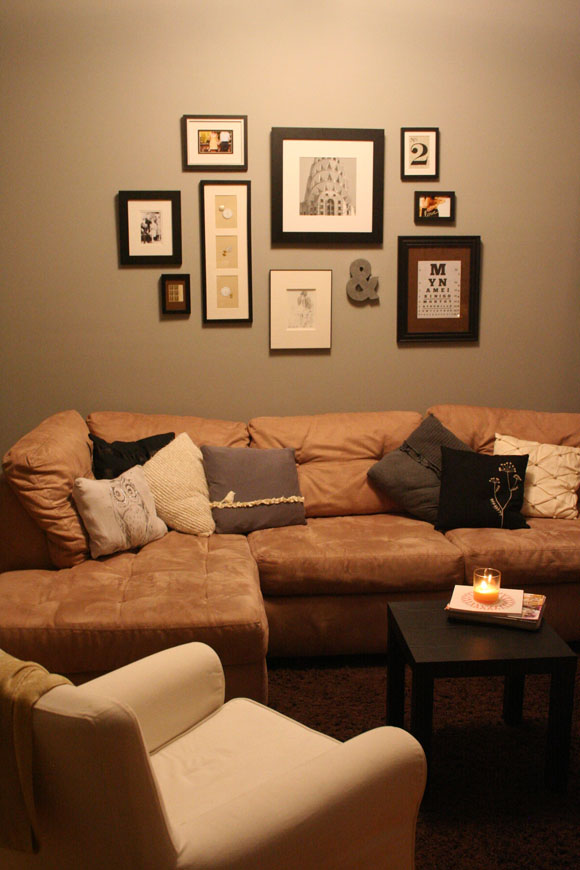