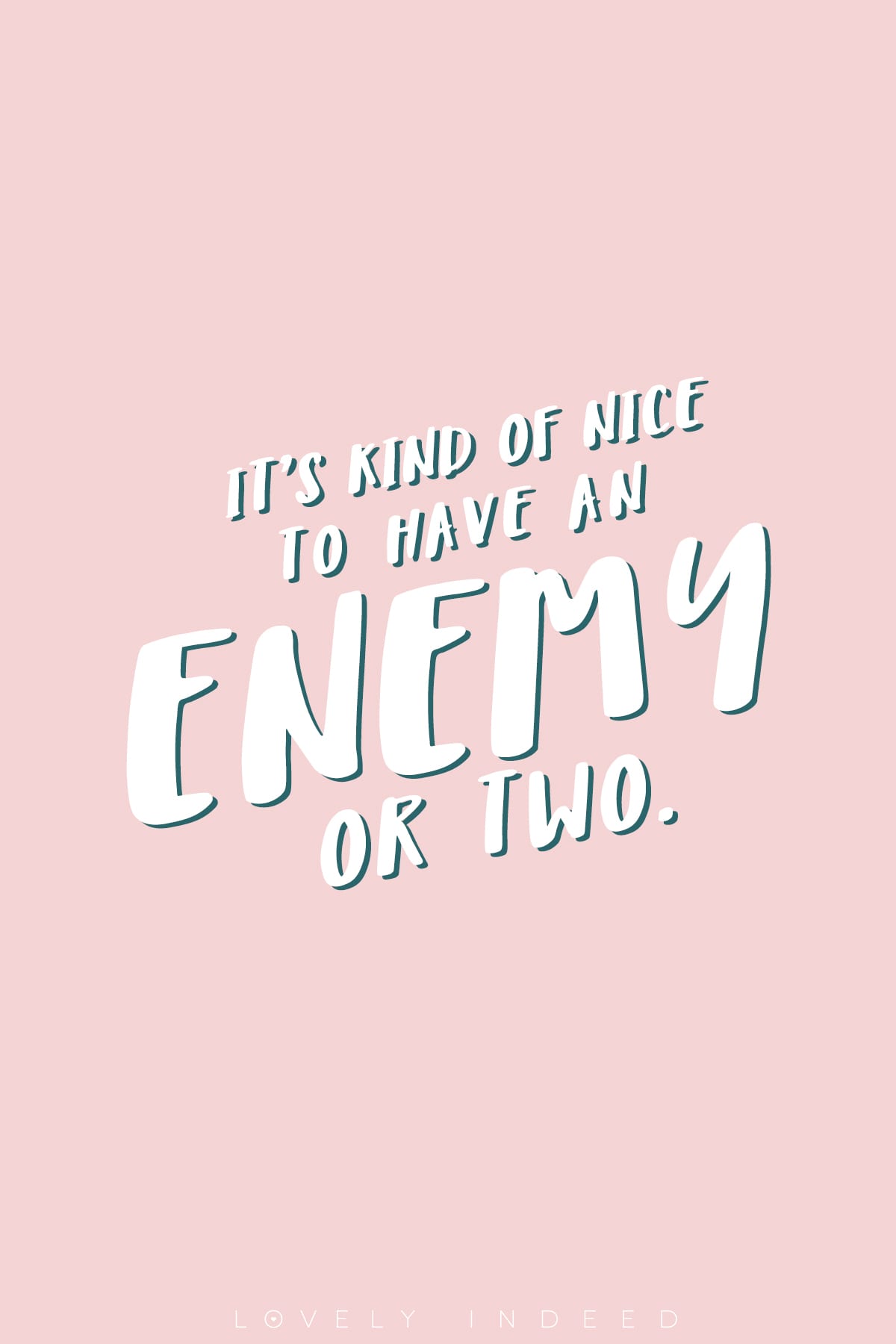 There’s this line from The Office that I always think describes me perfectly. Pam says, “I hate the idea that someone out there hates me. I hate even thinking that al-Qaeda hates me. I think if they got to know me, they wouldn’t hate me.” THAT’S ME! I am so painfully uncomfortable with confrontation that I avoid it at all costs. And I constantly make every effort to know that I’m on everyone’s good side — it has always made me so twitchy to think that I might be in somebody’s bad graces. It goes way back for me, I’m a peacekeeper at heart.

A few months back I was talking with a friend and asked if they had ever really, truly told somebody off to their face. I was half wishing that they would have a great telling-off story, because I think deep down I wish that I had one. There have been so many times when I’ve been in a situation where I really should have spoken my mind, stood up for myself, and just sort of let somebody have it. But I just… don’t. Because I don’t want to make waves. And then, of course, later I play the conversation over and over in my head and immediately come up with one zillion snappy responses or comebacks. But in the moment, never.

So I had been mulling this over for a few days and it hit me that I actually have had a couple of these experiences in my life, where I was forced into a confrontation and stood up for myself. I feel like I almost blocked them out because it makes me so uncomfortable. But I started remembering, and these conversations came back to me. Both of them were with good friends, where there was a misunderstanding or argument, and for once, I didn’t back down. I held my ground and said my peace. And you know what? Neither of those people are my friends any more.

In one case, it was my choice. In the other, it was my friend’s choice. And if I ever saw these people in person again it would be awkward at best. For a long long time, I agonized over both of these friendships. I felt lots of guilt and sadness and anger. But just recently I started wearing those two incidences like little badges of pride, because I sort of have enemies. And you know what that means? It means I stood up for myself! I stood by my convictions and I voiced them out loud and I wasn’t willing to waver. I’m still sad about the friendships, but I also know that friendships deteriorate for a reason. And in the midst of losing those friends, my upper lip got a little stiffer and I gained a few bravery points.

Don’t get me wrong — I’m not out cruising the neighborhood with my leather jacket on, looking for a fight like a Jet looking for a Shark. (Hellooooo musical theatre reference.) But I’m also glad to be on the other side of those experiences and be able to see that having enemies doesn’t always mean that you’re in the wrong, or that you made too many waves. Sometimes it just means that you can’t see eye to eye, and that you weren’t afraid to say so. xoxo

P.S. Do you have any enemies? Do you feel the same way about it that I do? Tell me your stories!

7 thoughts on “Is it Just Me, Or is it Kind of Nice to Have Enemies?”