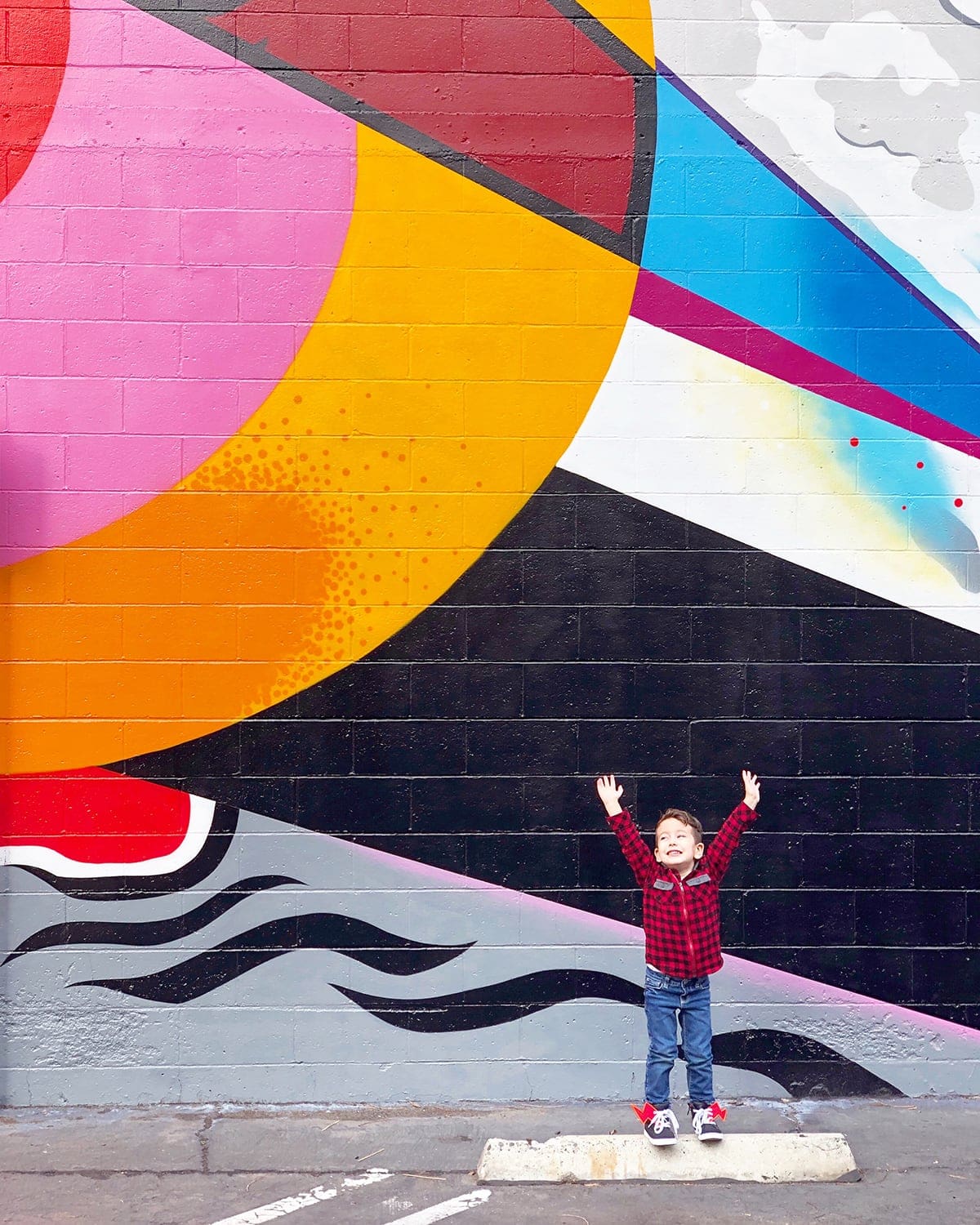 When Hank was tiny, he would often cry for about 45 minutes or even an hour while he was trying to get to sleep. He would be clearly tired, ready to nap, but he just couldn’t get comfortable. One day we discovered that with a very specific combination of walking, bouncing, and a pacifier, he would fall asleep in a couple of minutes flat. Pretty soon we could cut out the walking and bouncing but the pacifier was still there. Not wanting to develop the pacifier habit (oh, the irony), we took it away for naps and he quickly learned to suck his thumb to fall asleep. At first it was cute because he was a couple of months old. Then all of a sudden he was a year and still doing it. Then two years. And then his teeth started to move. So a couple of months before his third birthday we nipped it in the bud. And here’s how we stopped our son from sucking his thumb.

Let me preface this all by saying that Hanky was only a thumbsucker when he was trying to go to sleep. At no other point in the day did he even think about sucking his thumb. For him, it was purely a comforting measure when he would lay down to nap or sleep. So our story might be a little different than a kiddo who’s a daytime sucker, or otherwise. (Also, the photo below: I asked him if it was okay for me to share his thumbsucking story on the blog. He said, “Yes, but can I be in the picture? And my scooter too?” Mom heart exploded.) 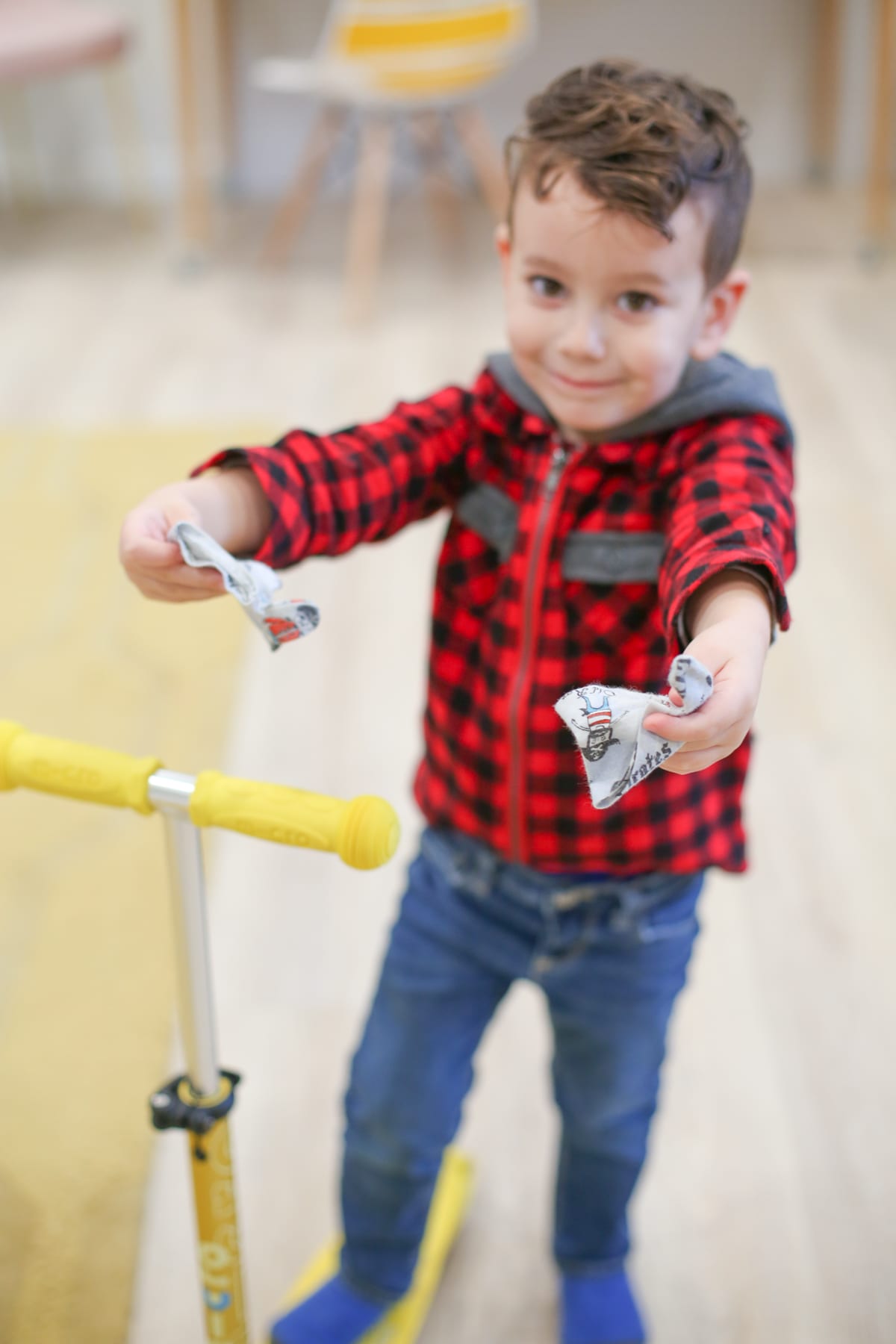 At first we just tried to talk it out. He’s very logical and thoughtful; I thought maybe there was a chance we could explain it to him and he would stop. So we tried that. He understood it was hurting his teeth and that it was giving him a callus on his thumb. He knew we wanted him to stop. So we would tuck him in to go to sleep and he would say, “Can you leave now?” And when we would ask why he would say, “So I can suck my thumb.” HAHAHAHA. I love it when toddlers try to be sneaky. It’s the cutest.

Then I asked on Instagram if anybody had experience and a bunch of people replied that they had success with the method of painting the thumbnail with that bitter nail polish. I read up on it and found a bunch of instances where it would gag the kid and make them puke and I didn’t want to touch that with a ten foot pole. So we went with the glove method.

The gloves we used were these, which I found on Etsy after a bit of searching around. There were a few pairs on Amazon as well, but these seemed to be good quality and they were one of the few I found with patterns that Hank would find interesting. We got them in the mail and showed them to him; at first we called them pirate gloves but he insisted on calling them superhero gloves. So fine. No problem. He wore them around during the day for fun to get used to them. Cut to the first time we told him he would wear them to sleep. He laid down with them on, tried to stick his thumb in his mouth, and immediately started bawling. At least we knew he didn’t want to suck with them on!

Not gonna lie, the first night he wore them was tough. But only while he was trying to fall asleep. He kept them on all night and didn’t suck. It was the same story for the first few days, as he was getting used to falling asleep without that extra comfort. Around that time he started requiring a stuffed animal to fall asleep, to replace his old routine. We kept it up with zero exception, using the gloves for every nap and bedtime for three weeks. Pretty soon he could put them on and take them off by himself, and he was falling asleep more easily each time.

Finally one day, almost four weeks in, Ryan forgot to put them on for a nap and Henry forgot to remind him. None of us realized it until Hanky woke up and said, “Hey. I didn’t suck my thumb.” And that was it. It was done. He didn’t wear them again after that and he hasn’t sucked since.

Looking back, I’m surprised that it worked so easily, because I sort of thought that Henry might figure out that he could just… take the gloves off after we left. But he didn’t, thank goodness. A few things to note about the gloves, if you’re going to try them for your kiddo. I probably should have gotten two pairs, one to wear while the other was in the wash. I washed them every couple of days but had to be sure not to wash them while he was sleeping. So you might want to double up. They also show some wear with all that washing. Also, we measured very carefully when we were sizing him, to make sure the gloves would be snug. You want to make sure they can’t easily wiggle their little thumbs out of there.

I’m so glad to no longer be worrying about permanent damage to little dudes teeth or bite! If you have a thumbsucker, hope this info helps you too. Good luck! xoxo