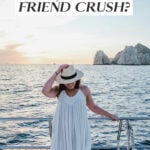 I’ve tried to start this post so many times, and I have always put it on the back burner because I didn’t quite know how to do the topic justice! And I probably still won’t, even though I’m tackling it now. But it feels like the right time. So let me tell you a story about the time I had a major friend crush.

I had just (I mean, like, two weeks earlier), moved to New York City from California. I knew two people. And I had gotten cast in a teeny tiny musical in Manhattan, for which I was super grateful, because it was at least a way to meet some more people.

For the first couple of days of rehearsal, we were missing our lead actress, Leslie, who was out of town. And I can remember, the day she was set to come back, everybody was so excited that the whole cast would be together to rehearse. We were sitting in the rehearsal room, and she walked in.

And, I swear, I remember it as clearly as the first time I met Ryan.

She had this open smile, and she seemed so confident and sure, she was carrying a bag that I loved, and she was effortlessly funny. And I knew that I wanted to be her friend.

Have You Ever had a Friend Crush?

Has this ever happened to you? Have you ever met another woman and all of a sudden developed a friend crush? That feeling where you just know you should be friends, and you get super excited at the thought of seeing them, and you want to know everything about them? The excitement of it feels a lot like having a romantic crush, but totally platonic.

So. The story continues. After a few days of rehearsal, the cast decided to go out for drinks on the weekend. I ended up sitting next to Leslie, and it was the first time we had actually had real, extended conversation (because in rehearsal you can’t really get too chatty). We talked like we had been friends for years, and by the time we left, the other cast members told us that we were destined to be besties.

And you know what? We still are. Literally. We kind of became inseparable starting on that night, which was now twelve years ago. We’ve seen each other through breakups, family stuff, cross-country moves, kids, businesses, and a helluva lot more.

How do Friend Crushes Help Us?

But I always look back and wonder how exactly I knew that I wanted to be her friend. When we experience the sensation of a friend crush, is it our inner voice trying to match us up with the people who will help us navigate life, and support us along the way? If we try to stay in tune with that voice, will it help us find our tribes?

Looking back at how we became friends, I can’t help but assume that the universe conspired to put us in the same place, because the odds of us meeting otherwise were a zillion to one. But knowing how my bestie has enriched my life, I also have to think that fate and God were mixed in there too, orchestrating that blessing of friendship.

Now, to be fair, I’ve also had friend crushes that have fizzled. The kind where you meet someone and think, “Oh my gosh, we have to be friends.” Or sometimes, “Yowza, I wouldn’t mind being her.” And then you get to know each other more and it fades. I’m not sure what that kind of friend crush is here to teach us. Maybe a lesson about ourselves, and our values, and our self-worth.

Either way, it turns out that friend crushes aren’t a new phenomenon, and can be tracked wayyyy back through time. There’s a New York Times article that says that evolution may have favored those feelings of adoration because they helped women bond with one another and work cooperatively. The vibes that bring us together are the vibes that help us survive.

But I have to know — am I the only one? Have you had friend crushes too? And have you ended up friends with your platonic crush? Leave a comment and let me know.

Oh, and by the way? Just the other day I helped Leslie decide on her wedding dress. xoxo