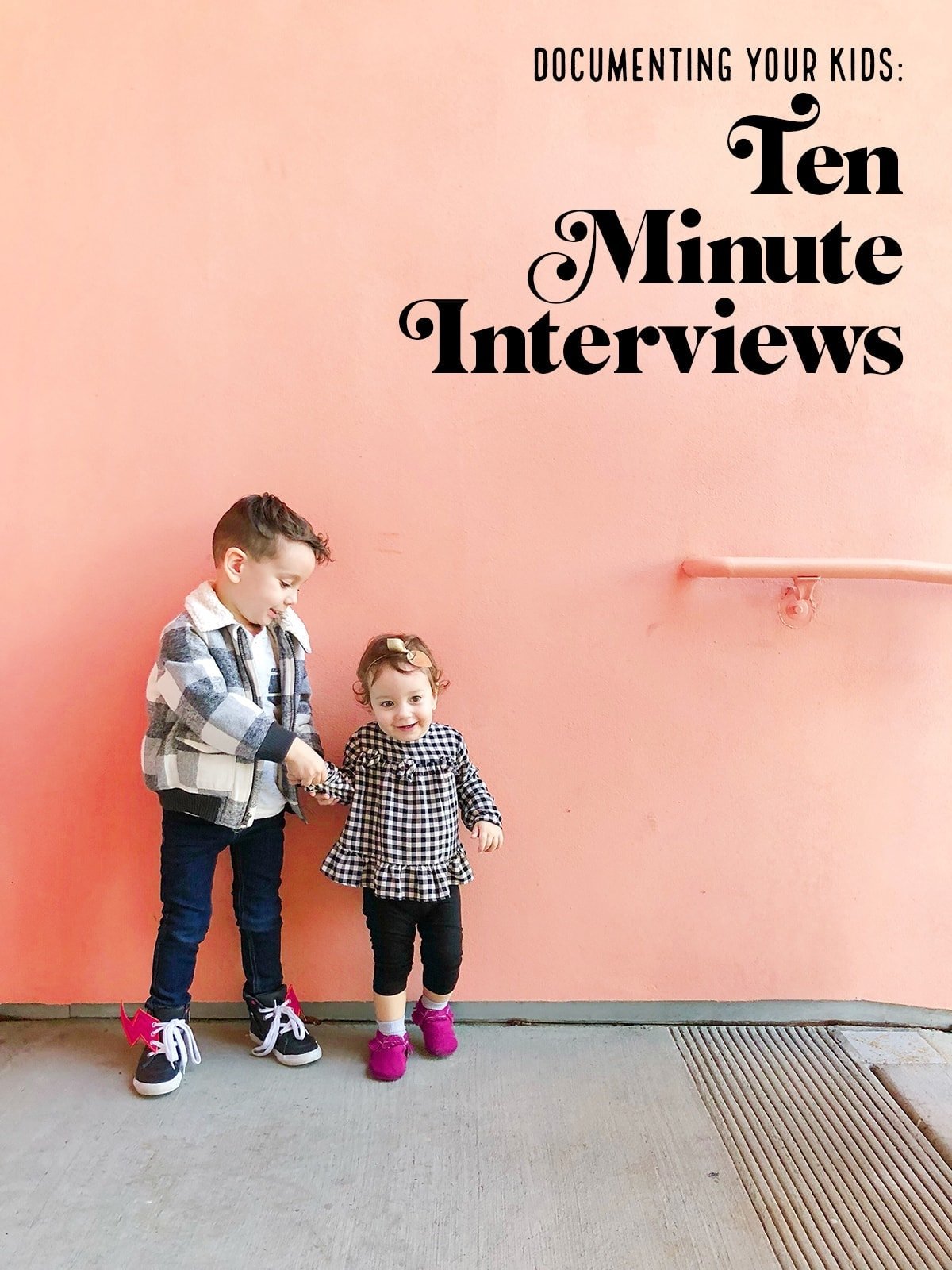 I’m our family historian, and it brings me the deepest joy to have that job. Since our kids were born I’ve been keeping their baby books up to date (yes, even kid #2’s!), taking and printing photos, and making annual videos. The annual video is something that I’ve been meaning to do a post on; I splice together the little moments that we video every day into a huge film each year for each kid. They end up being about 15-20 minutes long for each year, but I figure when they’re older it’s something they’ll treasure. They’re also not anything that we necessarily show to anyone else, because who wants to watch 20 minutes of someone else’s kid?! Haha! But my friend Katie recently shared a tradition that her family has, that we adopted with Henry as well: Ten Minute Interviews.

Basically, you just turn on a camera and talk to the kiddo, for ten minutes. About anything — it can be stream of consciousness, it can be interview-style, whatever works for them. But each year around the same time (we’re planning to do it right around each kids’ birthday), just turn on a camera one day and chat. When they’re little it’s interesting to see how long you can even keep them focused and talking, but I can imagine that as they grow it will be so incredible to see how they change each year. And when they’re grown up they have those videos to look back on or show their own kids, and they can marvel at how little they were, or the things that they found important, or just have them as a little glimpse into their past.

We recently did Henry’s first ten minute interview, and after a few failed attempts we realized the best way to keep him talking was to let him play while we did. So we sat down with Legos (his current favorite) and just started chatting. Some of the things that came out were so fun because they were so quintessentially “Henry” right now — his favorite friends, toys, places. And other things were total surprises and we were astounded at what came up that we had never talked about before. Kids are incredible, and sometimes I forget that while we’re doing our big grownup lives, they’re having an entirely different experience that’s always shaping who they are.

I thought it would be fun to share a few snippets of Henry’s ten minute interview — just some highlights, so you can get an idea. (Watching it back, I also realized I’ll always remember this video because he was in the middle of another bad cold and he sounds so stuffy!) Someday soon I’ll do a whole post on how I put together their annual videos, which is a lot more involved and probably not for everybody. But the ten minute interview idea is so accessible and so neat I just had to share.

What do you think? Would you ever adopt the Ten Minute Interview tradition with your kids? It could even be interesting to do with a spouse or a partner, to see how things change over the years. I’m looking forward to Maggie’s first one, probably next year. Let me know if you try it! xoxo