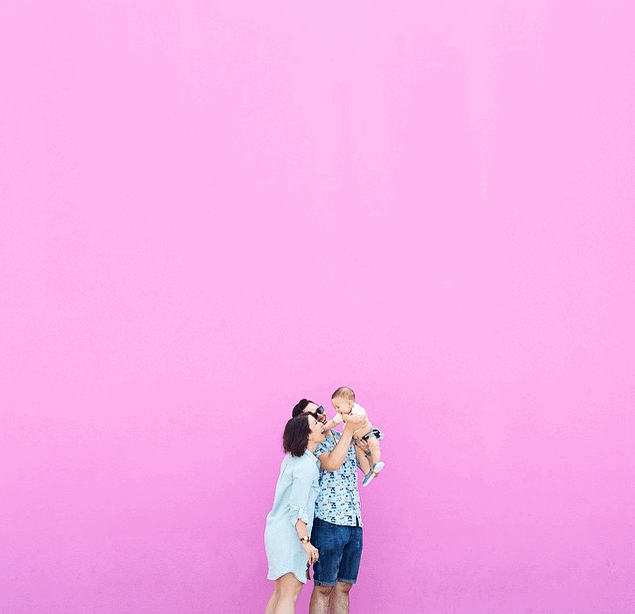 We get asked all the time who takes all of our family photos. And with the exception of just a couple of photos, the answer is… we do. We take them ourselves! Partly it’s because we have the equipment and the know-how so we might as well just go for it, and partly it’s because you never know when the opportunity will present itself for a group picture. So we’re kind of always ready. I’ve done a little post on this before, but I thought it would be good to get into more detail about how we actually get the shots of everyone smiling with their eyes open and looking like they’re having a decent time. So! Read on for our tips on how to take your own family photos, and you’ll have your Christmas card shot in no time. xoxo 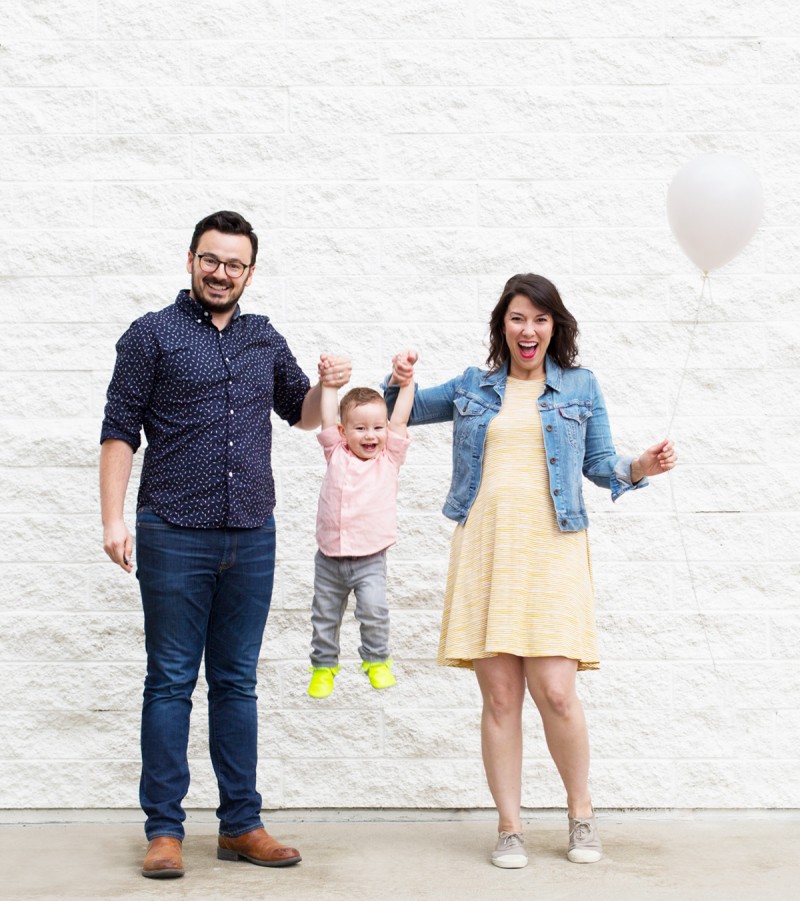 Set up your Equipment. I think that it’s absolutely crucial to have a remote shutter for your camera if you’re planning on making this a habit, or trying to get a good photo for a holiday card or something similar. It’s just too hard to keep running back and forth between your camera and your photo area if you’re using a self-timer button. Do a little research and see what remote shutter will work with your camera. We have been using this one for years; it’s less than ten bucks and works like a charm. If you’re using your smartphone you can also get a remote shutter like this one.

Once you’ve got your remote shutter, read the instructions on how to pair it with your camera. It should be in the shutter instruction booklet. Then set up your camera somewhere steady to get the shot. Note — I said “somewhere steady,” not “on your fancy tripod.” Yes, we sometimes use tripod setups for our group photos in a studio setting but more often than not we are out and about while we’re taking these photos. I’m usually caught without a tripod so I’ve been known to wing it. We’ve taken photos with the camera on our car hood, on a stroller, on my purse, on a park bench — you name it. Just be careful that you place your camera in a spot where it won’t slide off and fall. That would be TRAGIC.

Get Focused. Be sure that before you start snapping photos you check the focus on your camera, especially if you’re shooting on something that doesn’t autofocus for you. Have one family member stand in the spot where you’ll be taking your photos and take some test shots to be sure nothing is blurry. Then, once you start snapping photos, be sure that you’re all standing in the same spot and on the same plane (or distance from the camera) so that you’re all in focus. 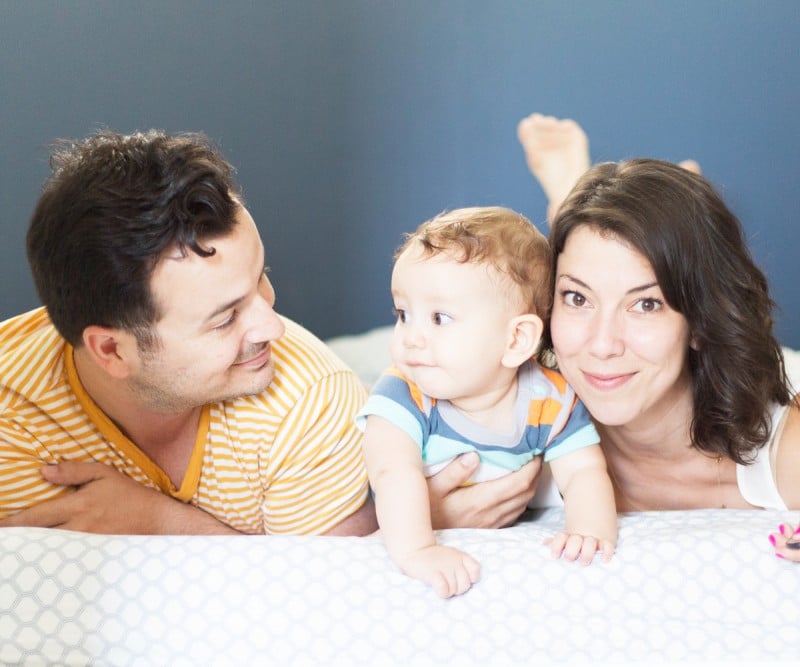 Designate a Photographer. So you’ve got your remote shutter set up, and now you need someone to hold it and actually take the photos. This means that you’ll be holding the remote shutter in the images that you’re taking, but if you’re tricky you can almost always disguise it. Either Ryan or I are holding the remote in every one of these photos; sometimes you can see it and sometimes you can’t. But it never really detracts. And if it really bugs you to see it, then do a little Photoshop magic afterwards and get rid of it.

Anyway! Pick somebody to hold the shutter. We find it best to just fire away once you’re all together and take a whole mess of photos. Yes, it’s more work to sort through afterwards but when you’re all in the picture and nobody is placing or styling you, you just have to go for it. Also, you’re bound to miss a sweet moment or two if you’re waiting to press the shutter until you feel like you’re perfectly posed. 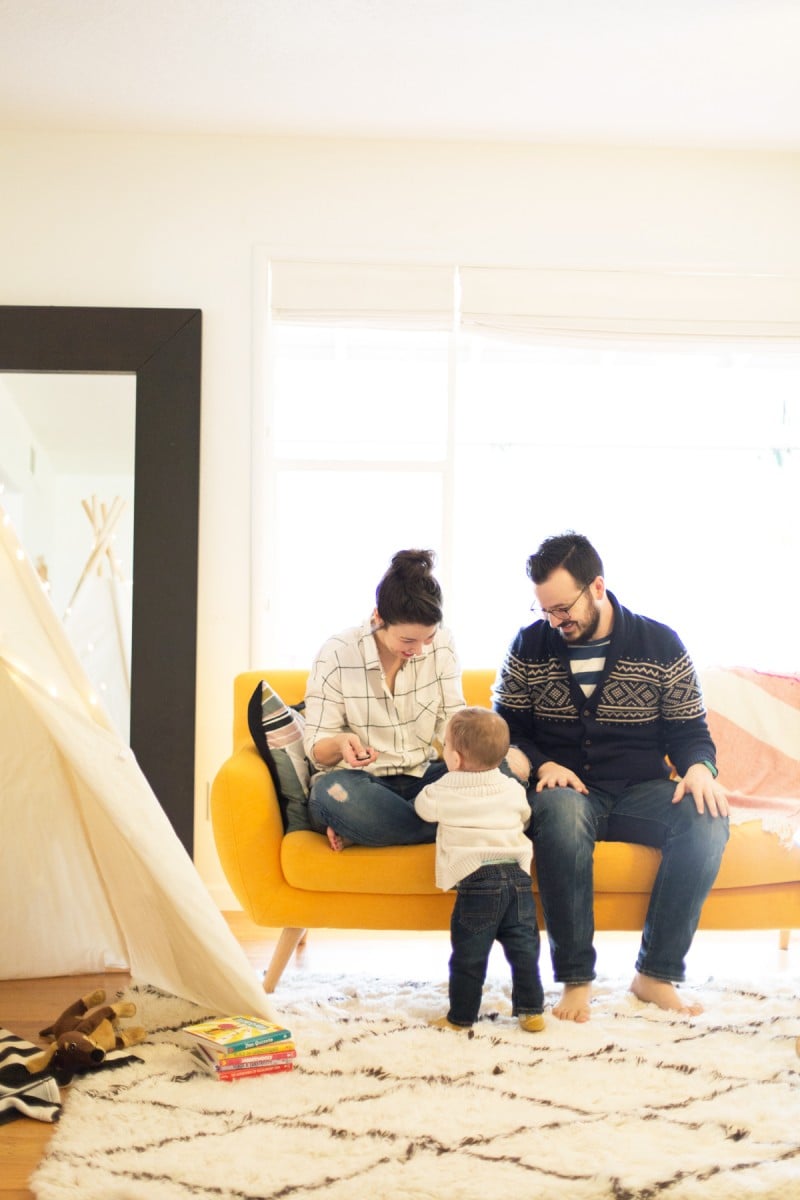 Start Playing Around. And speaking of being perfectly posed, don’t. Well, I guess maybe that’s a good rule of thumb if you have toddlers or babies, anyway. But usually our family photos are of just just goofing around and being happy together, and we’ve found that it’s what works best. It feels less stiff, everyone is more comfortable, and we always end up with photos that look relaxed and feel like us. So instead of trying to get your kids to look at the camera and smile, just try to get them to have a good time while you’re snapping. And if it’s just the two of you, don’t get too prom-photo-y. Put on some music, move around, try different positions, and just be yourselves. In the photoshoot below for our Christmas cards last year, Henry had just learned to walk and he wanted to go everywhere. At first we tried to hold him and he was not having it. So we let him wander and it made for some great images. 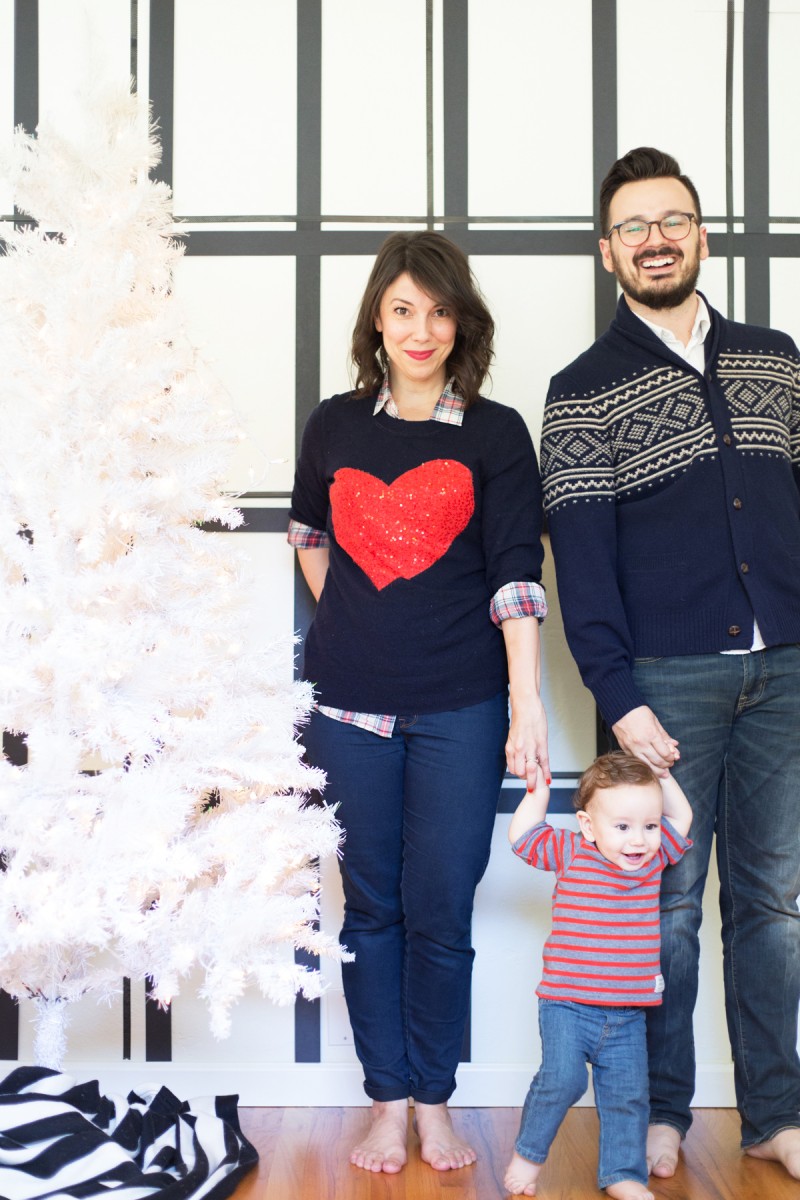 Pick a Child Wrangler. Another good tip for parents with babies or toddlers — one of you needs to be in charge of the kid. Instead of both getting in their face and trying to make them laugh or smile, just let one parent entertain them. The other can look at the camera or look at the kid while they’re snapping the remote shutter. The separation of duties makes things easier on everybody and is less overwhelming for the baby if they’re just focused on interacting with one parent. 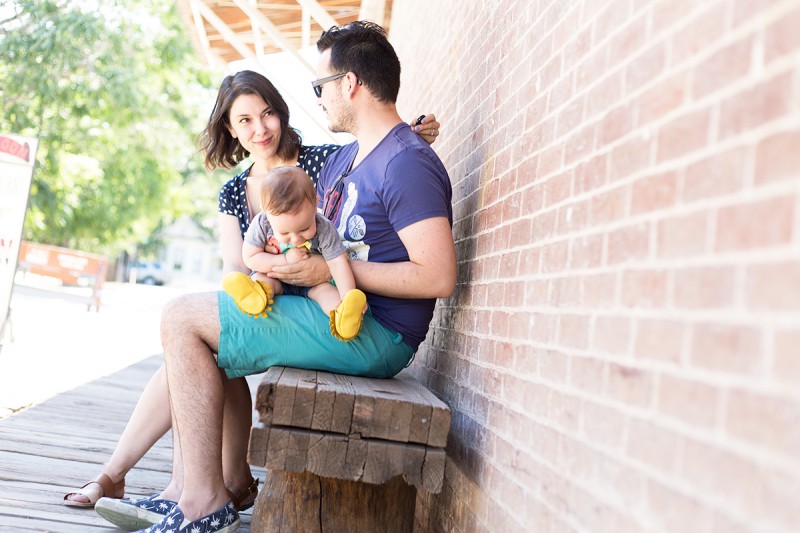 Feel Happy, Look Happy. The number one thing we’ve learned taking all of these photos of our family? If someone’s in a bad mood, just stop. Come back later. There’s nothing worse than bickering or being upset and trying to take a happy family photo. Be sure you start in a place where everybody’s pumped to snap some photos and nobody’s cranky or out of sorts. Come in happy and let the happy show! 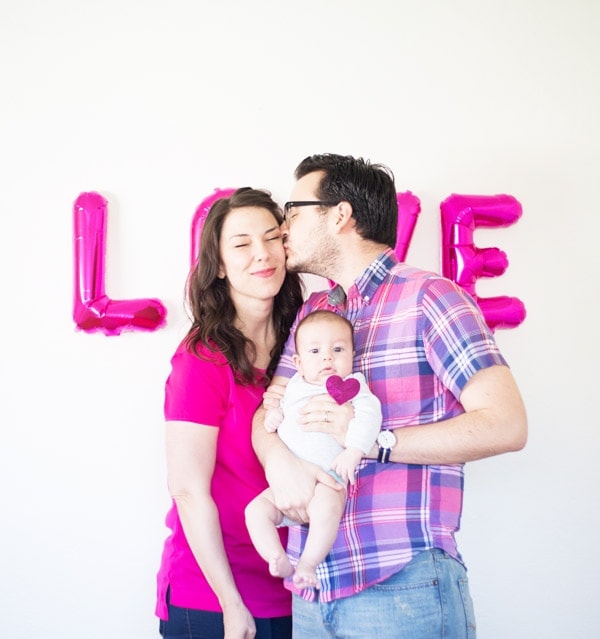 4 thoughts on “Tips for Taking Your Own Holiday Family Photos”