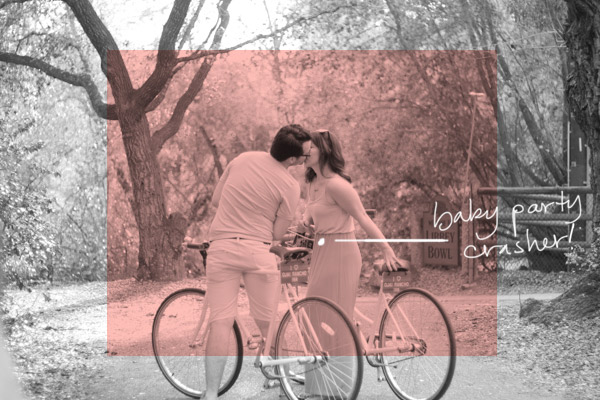 In case you’re missing it, I share my weekly thoughts on pregnancy over on Momtastic. But obviously I wanna give you guys the dirt, too, so I thought I could go way back and tell the (highly anticlimactic) story of how we found out I’m pregnant. Actually, now that I’m thinking about it, this is probably going to be really boring. But you’re here and I’m here so I’m going to tell it anyway.

Our boring story starts back when we went to Ojai. Remember that? We were bopping around town, doing our thing, and I swear, I just kept tripping over everything. I was stubbing my toes and dropping my camera and I just couldn’t keep it together. It was Klutz Town USA. And I was like, Huh, that’s weird.

Cut to a week or so later, and we had gone home to visit my family. One day we went to my favorite sandwich place for lunch, where I usually can only manage to eat half a sandwich, and I downed the whole thing before I could even blink. And I was like, Hold on a second…

After a few days visiting my family I realized that I was kind of walking around like a zombie and I was tired. Like, tired in my bones. It had been that way for a while but I was just kind of going along anyway and not really realizing it until we pulled up to my parent’s house one day — I remember thinking before I got out of the car that opening the car door and stepping out was going to take so much energy. And then I was like, Wait. I’m pregnant.

So I told Ryan. I was, like, 99% positive all of a sudden. Like some magical human pregnancy test. We kept it under our hats until we were back in our own home. And when he went out to buy groceries I said, “If you think of it, grab a pregnancy test.” Just all casual. Because I’m casual like that.

So he grabbed one and I took it and the rest is history. Well, really boring history. I literally came out of the bathroom and just smiled and he was like, “Yeah, we knew it.” And now we’re having a tiny person!

If you’ve ever been pregs, I’d love to know how realized or found out! It’s such a weird thing to feel something new going on in your body and not even realize what it is for a while. xoxo

31 thoughts on “How We Found Out I Was Pregnant”