Let’s see…  When we left off, we were asking Robin about the possibility of changing the stone in my engagment ring.  She was absolutely wonderful about it, and soon we were picking up the new and improved ring in Brooklyn at a darling little boutique called Catbird, where some of the Bittersweets pieces are sold.  We opened the little box and saw the work that Robin had done, and while it was beautiful, we both knew that it still wasn’t quite right for us.  We were a little hearbroken, because we felt terrible about contacting Robin again, but we knew we had made a wrong decision using a colored stone.  And beyond that, I really missed my ring; I had worn it for maybe a week out of the month that we had been engaged.

So Ryan took matters into his own hands.  I left for California for a week, and gave Ryan my ring to be changed.  He called Robin, who, once again, was completely gracious and willing to work with us.  When I got back into town, Ryan and I were going to head to Brooklyn to pick up the ring for what we hoped would be the final time.  On the way there, he stopped me and informed me that not only did he already have the ring, he had also arranged for all of our friends to meet us for a little re-engagement party at one of our favorite restaurants, and that after the party, he had gotten us tickets to a Broadway show that I had been dying to see.  He pulled a little box out of his pocket.  He opened it, and I saw my ring, absolutely perfect.  He had decided to put a diamond in it, and it was the best decision ever.  It finally looked complete.

I was bursting!  Not only had I been totally bamboozled by my sneaky fiance, but now all of our best buddies were there to celebrate with us.  Amazing.

What’s the moral of the story?  First, don’t quit until it’s perfect.  Second, find a jeweler as amazing as Robin at Bittersweets who will work with you until you find your version of perfection.

And here it is!  Photography by my super-talented roommate, Nick Gaswirth, with a little assistance from a gala apple.  xoxo 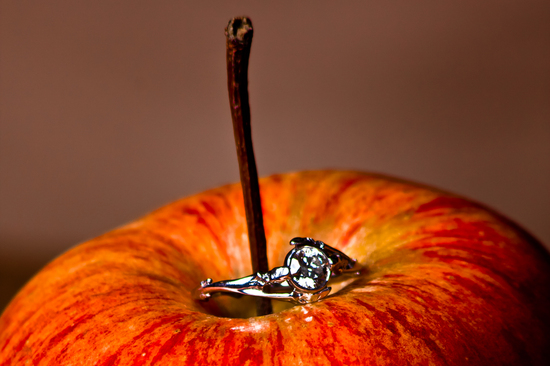