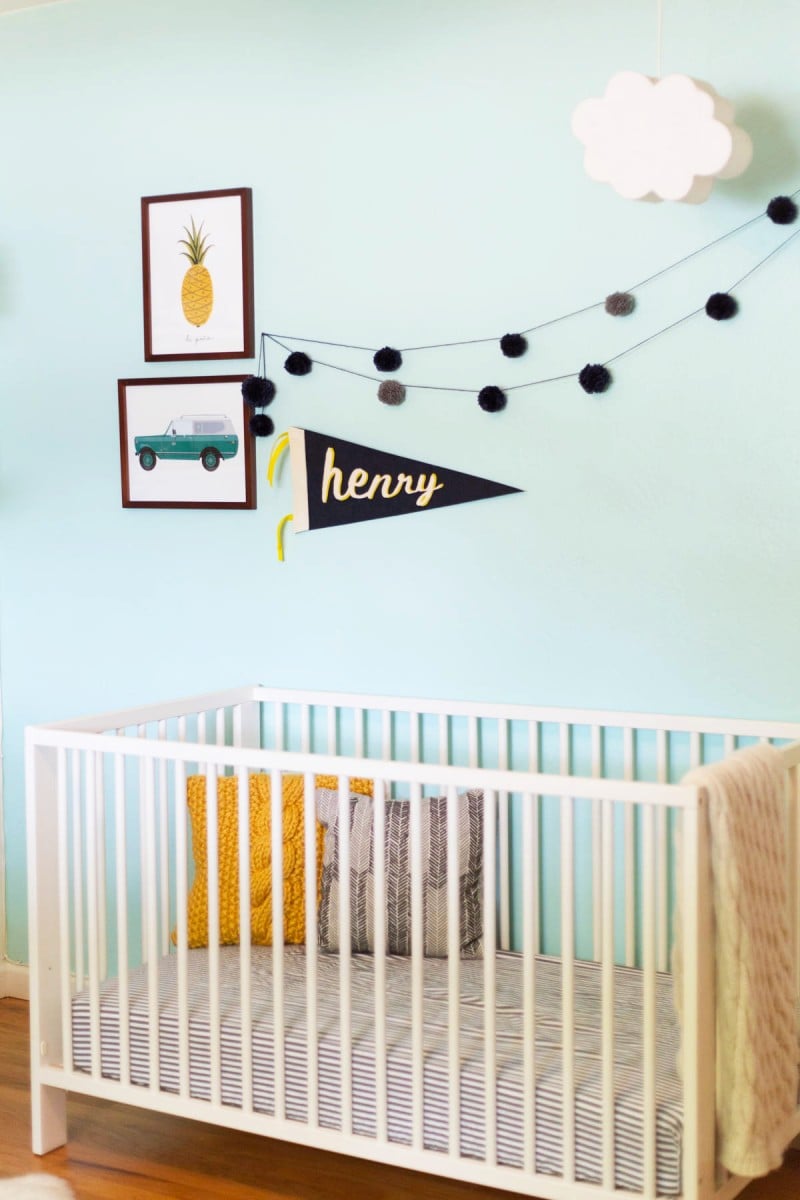 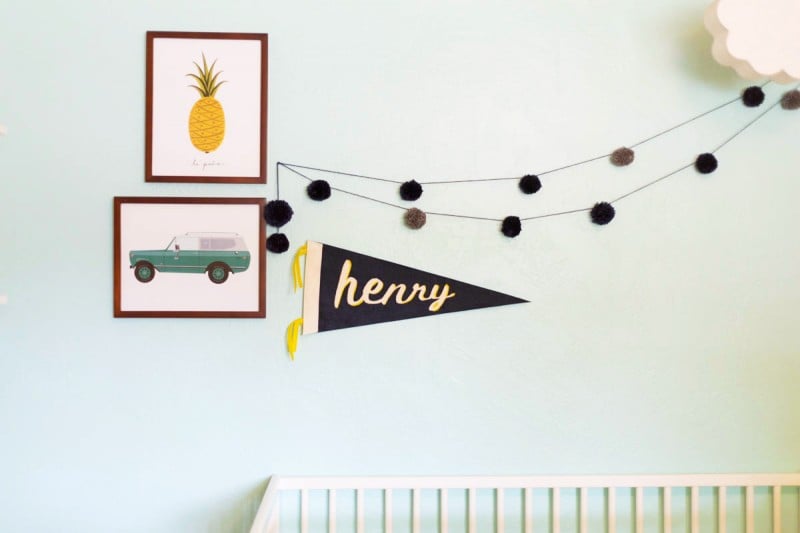 Football season is here! I have this weird relationship with football. I completely, one hundred percent do not care about it. I don’t have a team, I don’t know the rules, and I think it’s kind of boring to watch. But! I totally love everything about football season. The tailgate parties, the BBQs, the change of the seasons, people rooting for their favorite players — I think it’s all so fun. So I’ll go to a game any old time and root for whoever, but have no idea what’s going on. If nothing else, I’m enthusiastic.

All of this is to say, I got all inspired by these old football pennants I saw recently and decided to make little Hank a pennant of his own! I was getting bored with his room so I figured he must be too. So now we’ve got this little DIY pennant on the wall. This project is super quick and easy, and you don’t even need to get out a needle or thread! Let’s make ’em. 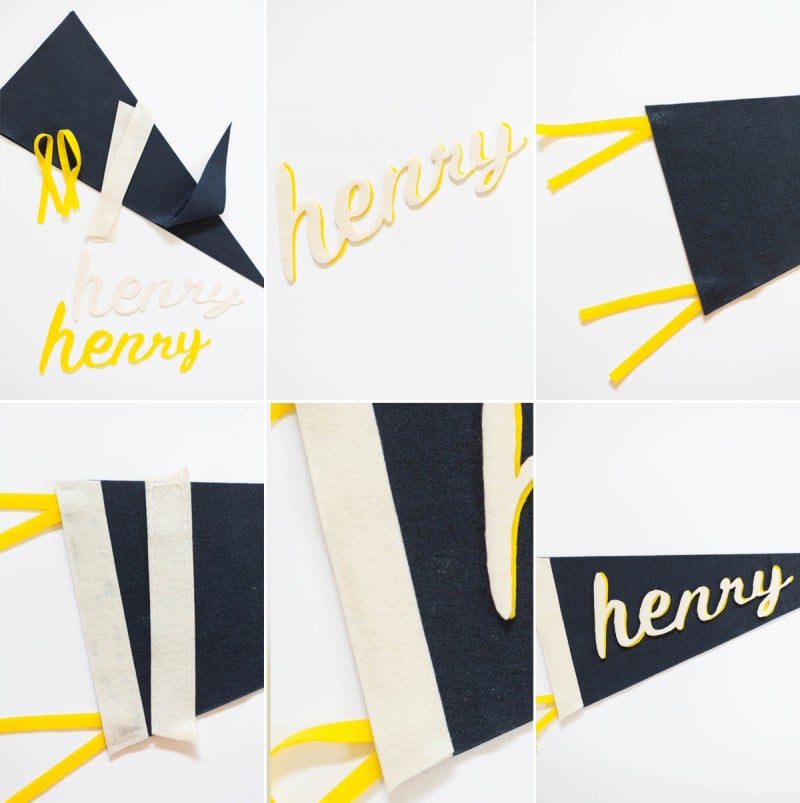 Step 1: Cut out all your pieces. You’ll need two flag shapes, 9 inches tall and 22 inches wide (at the point), two pieces for the flag border 1 1/2″ wide and as tall as the flags, two strips each 10″ by 1/2″, and the words you’d like on your flag in two different colors. To get your words, I recommend drawing them on a piece of cardstock, cutting that out, and then tracing onto your felt. Flip the word upside down and trace it onto the wrong side of the felt with the pen. Then cut the words out. (Flipping and tracing it to the wrong side ensures you won’t have any pen marks on the front of your felt.)

Step 2: Glue your words on top of one another, slightly offset to create a drop shadow effect.

Step 3: Glue your two flags to each other, one on top of the other. This creates a little structure and stability. On the flat edge of the flag, fold over your long felt strips and glue them between the two flags so that they’re tightly sandwiched in between.

Step 4: Glue one of your thick border pieces onto the flat edge of the flag. On the back of the second piece, spread a thin line of glue along both sides and the top, leaving the bottom unglued. Place this strip over the first strip and press to adhere the glue. With the bottom end open, you can insert a dowel if you’d ever like your pennant to be on a stick.

Step 5: Decide where you’d like your words on the flag and carefully glue them down.

Yeah! Go team Henry! I thought it would be pretty cute to just make one of these that says YAY — maybe next time. What would you have yours say? You could make one for your team, or your state, or your kiddos’ names like this one. Make a bunch of ’em! And if you try it, be sure to share on social with #thelovelysquad so I can see yours! xoxo 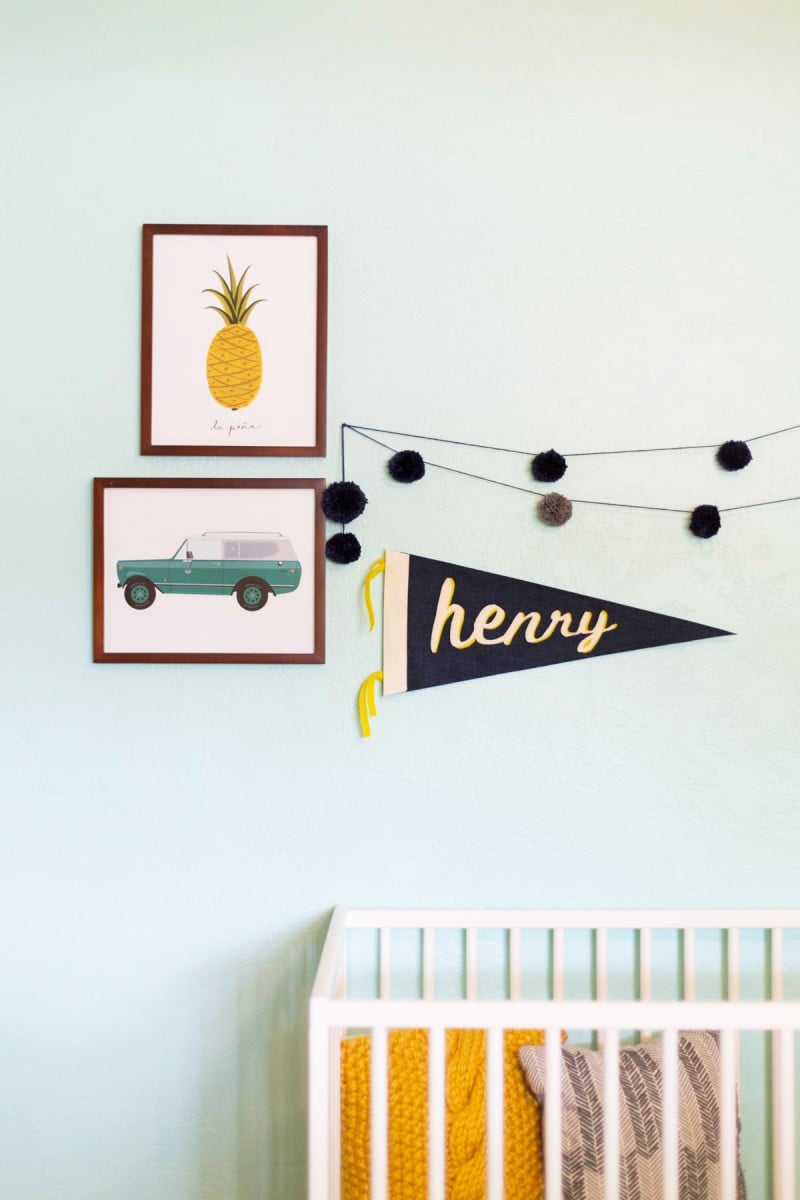