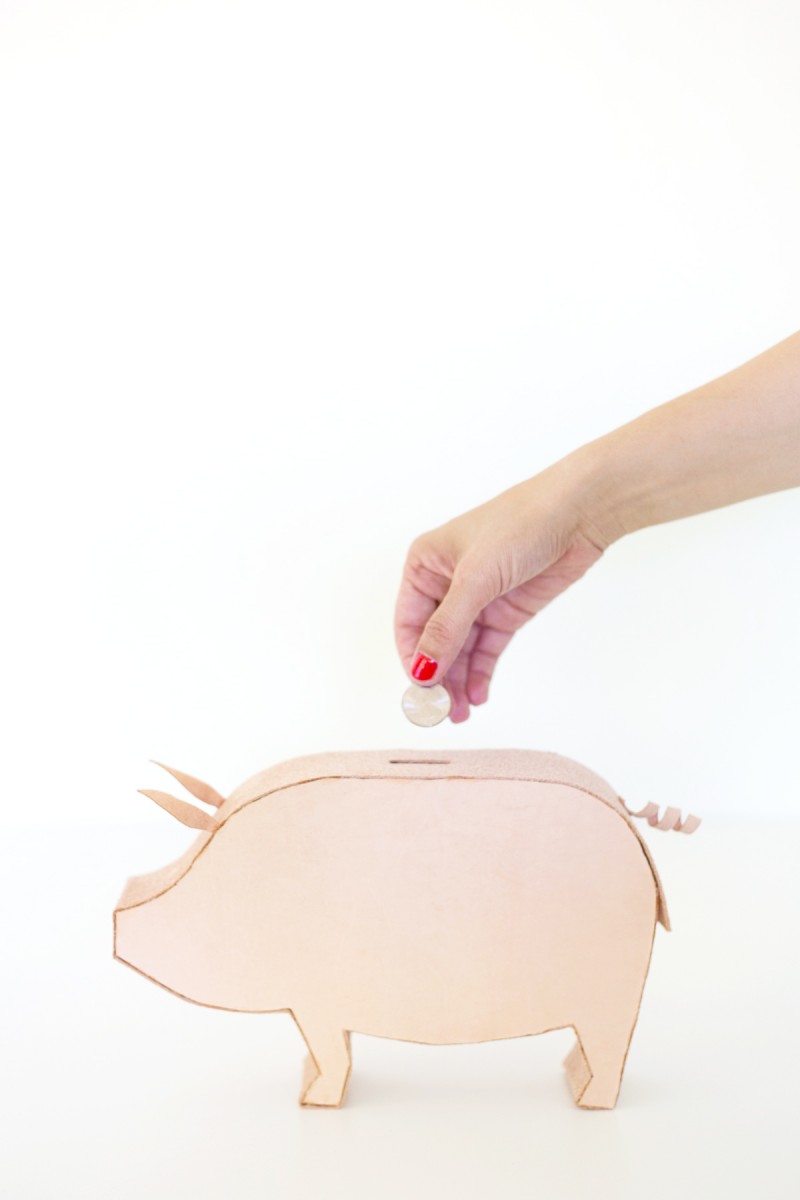 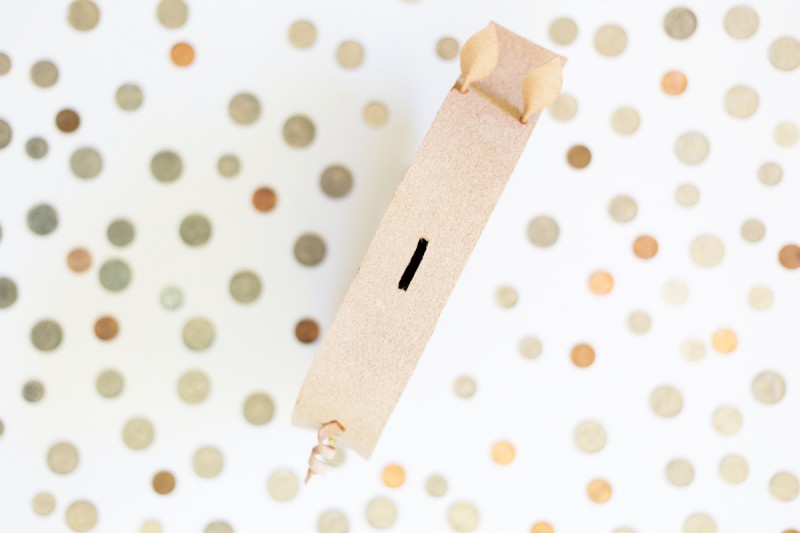 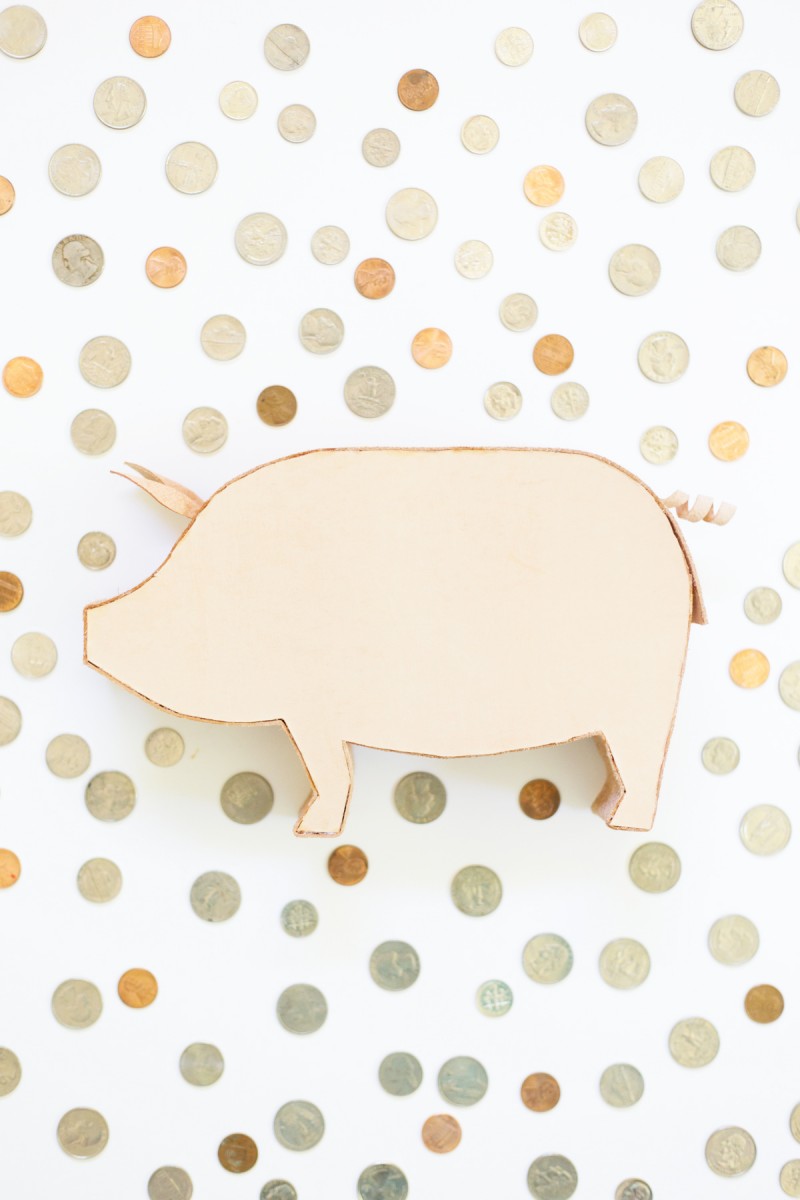 College ain’t getting any cheaper any time soon, kids, and so little Henry needed a piggy bank! I had been wanting to put together a bank for him ever since he came along and his Papa gave him his very first dollar (my dad loves giving his grandkids spare change; it’s hilarious). So now that dollar has a place to go — a very cool DIY leather piggy bank! It even has a way to empty out the change without ripping the whole thing apart. And this little piggy is kind of adorable, to boot. Wanna make one? 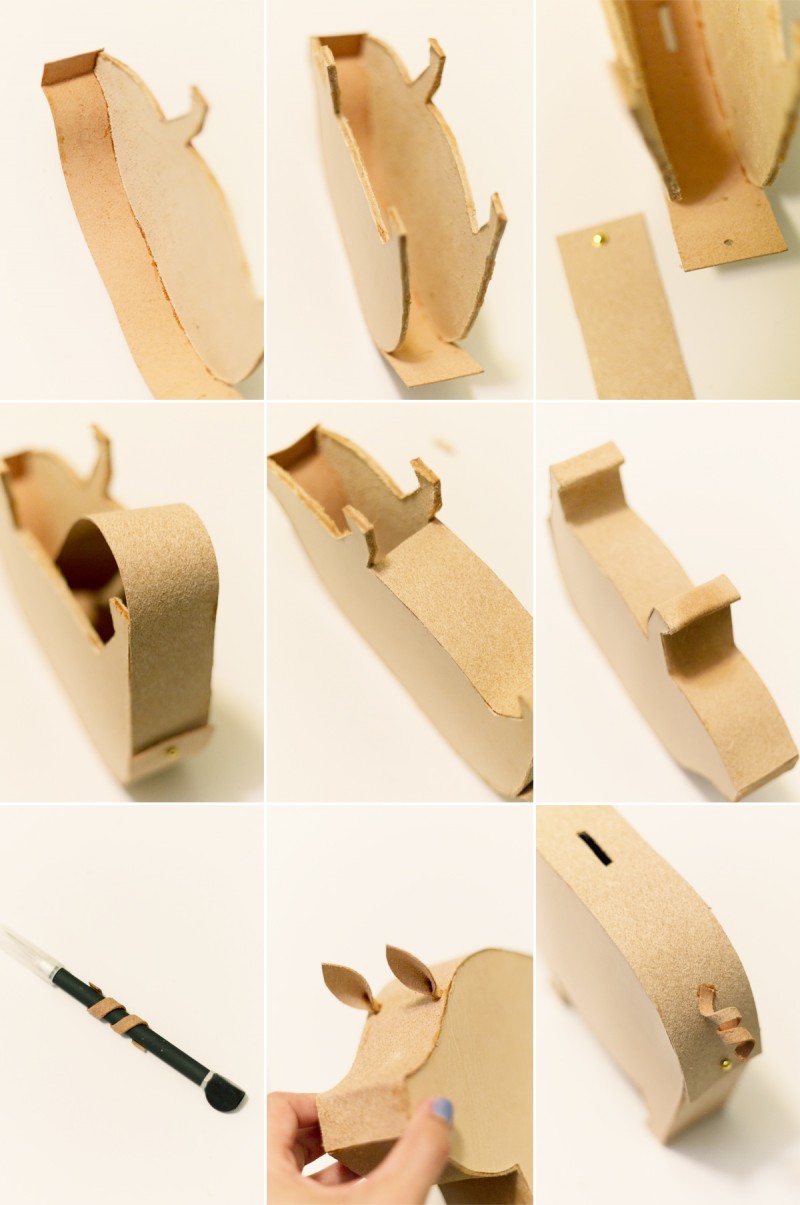 Step 1: Print out the piggy bank template and cut out. Cut the ear away from the body.

Step 2: On the back side of the thick leather, trace two pigs. You’ll trace the first, then flip the paper and trace the second so that you have two opposing pigs.

Step 3: Cut out the pigs. You’ll want to go very slowly and take breaks for this process so that your fingers don’t go numb! Trace the pen lines with the craft knife, going over and over a section of the line until you cut through the leather entirely. Continue until you’ve cut all the way around both pigs.

Step 5: Your thin leather into long 2″ strips. Place a thin line of glue along the back of the long edges on both sides. Starting at the bottom of the snout on your first pig, glue the thin leather up the snout and around the head and back. You’ll need to go slowly, smoothing the thin leather down and wiping away any excess glue that seeps out.

Step 6: This strip should reach all the way around the rump of the pig. Leave about 2 inches at the end unglued; this is where you’ll take money out of the bank. Repeat step five with the other pig, so that the two pieces are both glued to the thin strip. Once this is complete you can lay the pig on its back to make it easier to work.

Step 7: Punch a small hole in the center of the end of another thin 2″ strip and insert the button stud. Punch a larger hole in the flap of the first strip, on the pig’s rump. You may need to widen this hole with a small slit; use the craft knife for this. Insert the button stud into the hole. Now with this new strip, begin glueing down using the same process. You’ll glue it down the back and around the back leg, all the way across the pig’s tummy. When you get to the leg, spray the thin strip carefully with a bit of water. Once it’s slightly damp, mold the leather around the back leg. Glue down to the edges of the thick pieces.

Step 8: Glue one more 2″ strip from the front leg to the bottom of the snout, completing the pig. You’ll need to mold this strip around the front leg with some water, as in Step 7.

Step 9: Slightly dampen the base of the ears, put a tiny dot of glue in the middle of the bottom of each, and pinch each ear together to get a folded shape. Once this glue is dry, put another small dot of glue at the base of each ear and glue them on the head. Hold in place until they cure.

Step 10: Cut a strip of thin leather that’s about 1’4″ x 3″. Wet thoroughly and wrap it around your craft knife or pen. Allow it to dry in a curly shape, and glue it on the pig’s rump! 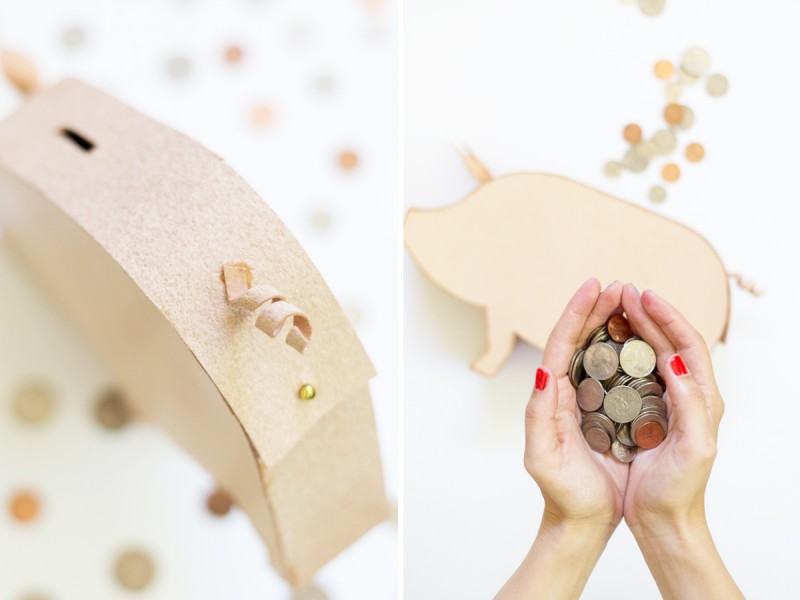 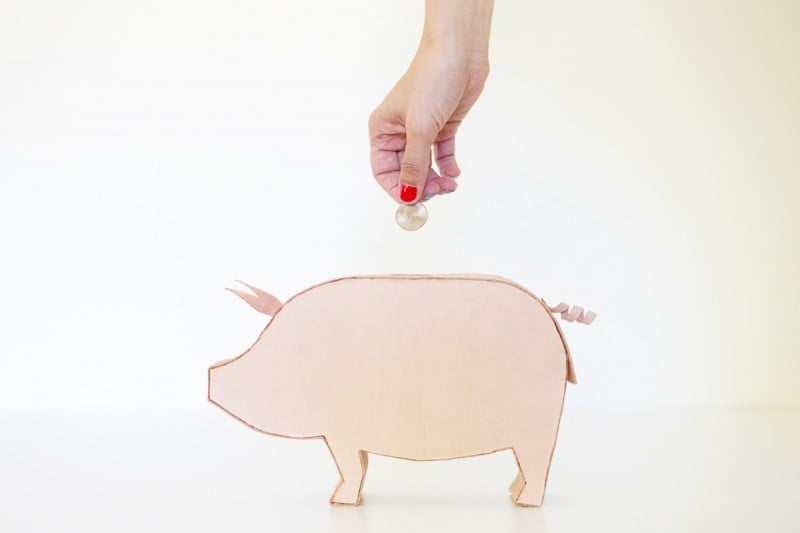 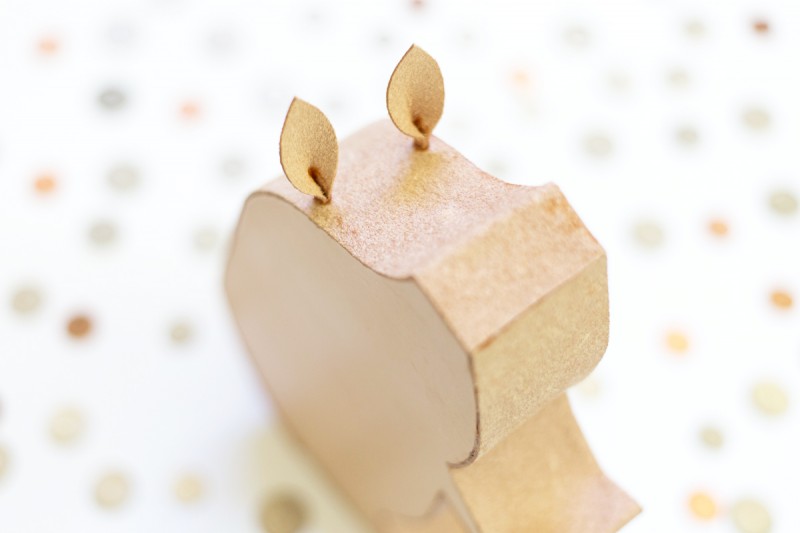 Phewph! Think you’ll attempt this one? It’s not difficult but there’s a lot of detail work. It’s one of those projects that when you’re done you feel like a super rockstar, partly because it’s an involved process and partly because it looks so stinking cute! Okay, gang, off to feed the pig some pennies. xoxo 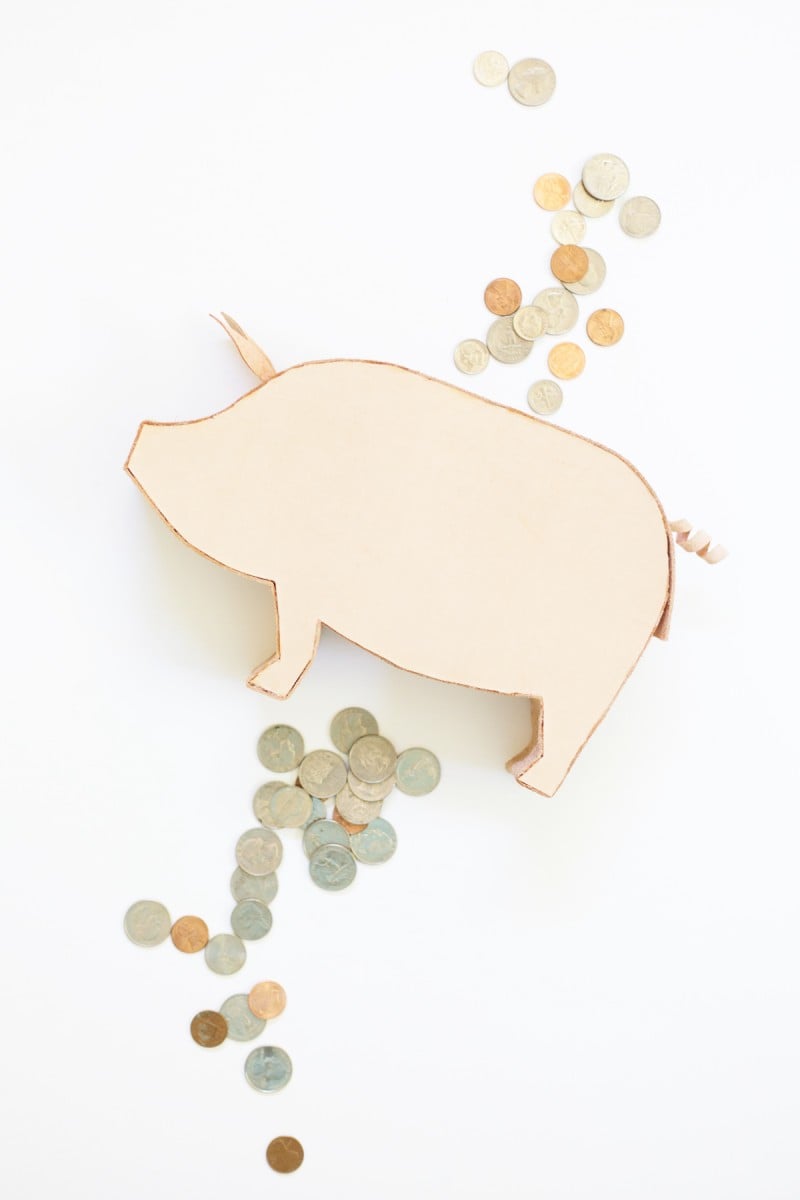 Pig by Joao Santos from the Noun Project