Mr. Lovely and I are so, so blessed to be surrounded by bunches and bunches of amazing friends.  So we had a tricky time when it came down to asking folks to stand up with us as we tie the knot.  But, knowing that we want to keep the wedding small (well, small-ish) and simple, we decided to have three bridesmaids and three groomsmen.

We wanted to do something super-special and creative to ask our wedding party to join us, so we racked our brains and came up with this:  a card in the mail, which would lead them to a link to a video online, which would be a stop-motion film made by The Lovelies, asking our best buddies to be in the wedding.  We had our work cut out for us.

We needed to make sure the stop-motion video idea would work before we went any further, so on our recent trip to California, we set up shop in my sister and brother-in-law’s backyard and tried it out.  For a first attempt at stop-motion, it wasn’t too shabby!  (Come back tomorrow, and I’ll show it to ya!)  Knowing that the video would work, we went ahead with the project.

I found some blank cards with cool patterns on them, and on each card, put the recipient’s first initial, in cut-out black cardstock.  Boys got red, and girls got yellow. 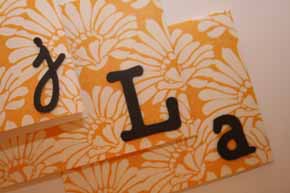 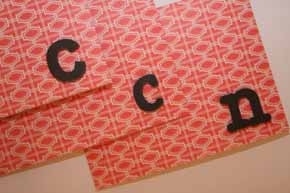 We wrote instructions on the inside of the card, and included the web address to the stop-motion video.  We included a mini-card, with instructions to read it after they found the video.  Then we wrote individual messages to each recipient on the mini-card. 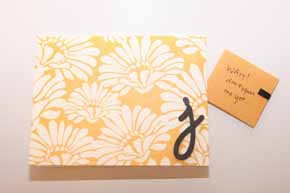 It took some doing, but I’m so glad we took the time to do it this way!  Check back for the video tomorrow — there are a couple of surprises.  xoxo

2 thoughts on “bridesmaids and groomsmen”